The panda is the most rewarding emoji on LinkedIn

An analysis of 2.9 million emojis on LinkedIn delivers a surprising piece of information: the 🐼 emoji elicits the most reactions. This research offers us an opportunity to critically look at the data and understand the origin of a polluting LinkedIn phenomenon. Follow me for an exciting data mining exercise.
To learn more about the factors that impact virality on LinkedIn, I invite you to read my complete analysis here and send me a request to connect on LinkedIn.

In a previous article, I analyzed which emojis were most frequently used on LinkedIn. In particular, I showed that practices differed by country and language. When preparing the data, Frank Vanden Berghen, the designer of Anatella (the solution I use to prepare the data), asked me: do some emojis get more reactions than others? So, I reused my dataset to answer this question, and the answer was quite surprising.

I must admit that when I saw the results, I had to look twice because they were surprising, to say the least. As you can see on the graph below, the panda is the emoji that generates the most reactions on average. Each LinkedIn post containing a panda generated an average of 5536 reactions, far ahead of #2 and #3. 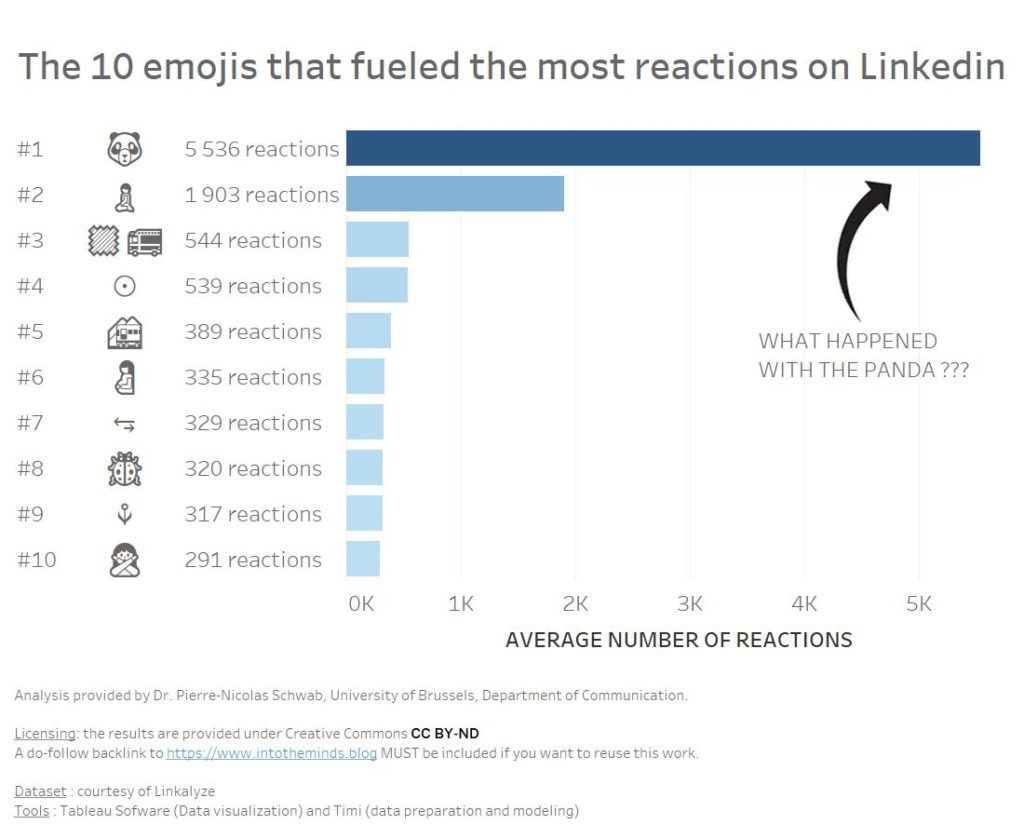 Looking at the data that is “behind” the 🐼 panda provides insight into the origin of this incredible statistic. First, we see that only 224 posts out of the entire dataset (4.6 million posts all the same) use the 🐼 emoji.

Reading these different messages allows you to interpret the results correctly. Here are some of them: 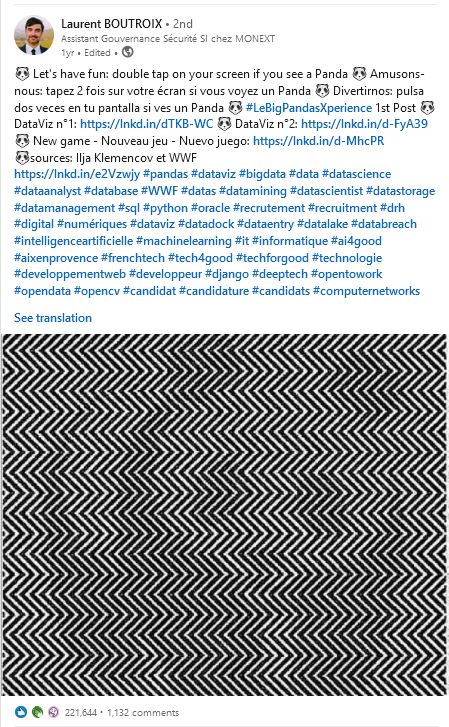 Therefore, we are faced with a “like trap” of the same type as the “type twice to make the dolphin jump.” Social hacking (to provoke a reaction from the individual) leads to hacking the algorithm.

LinkedIn’s algorithm works based on likes and comments, and the algorithm naturally pushes this type of publication. It then spreads throughout the network until LinkedIn discovers the deception and sets up a mechanism to prevent the “pollution” of the network. Only the first publication of this type works, and the author (Laurent Boutroix), has analyzed the success of this post (see illustration below). 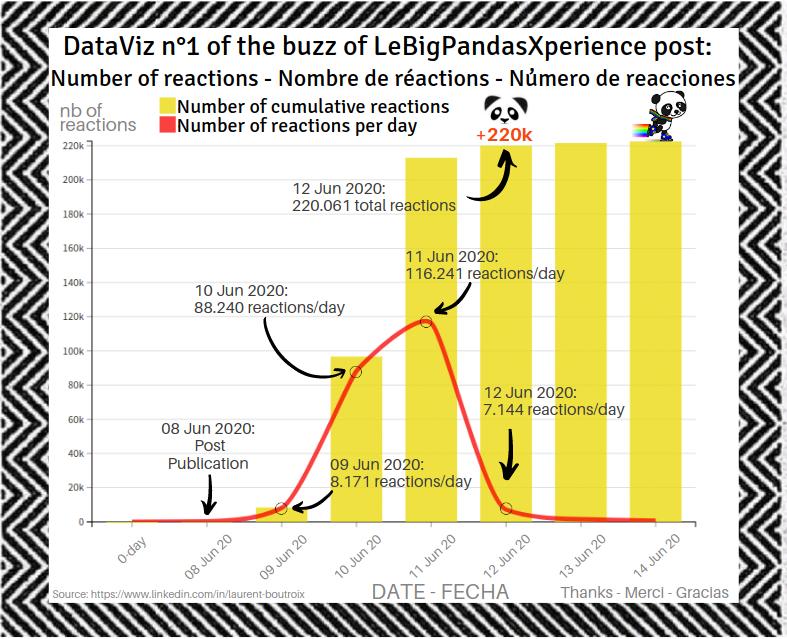 We can see that the “Buzz” effect lasted only one week, between June 8 and June 14.
The posts that were inspired by this “social experiment” also gathered a significant number of reactions. Suppose it is impossible for me, a posteriori, to know precisely when these “plagiarisms” were put online. In that case, we can reasonably think that it happened between June 8 and June 14, 2020, before the LinkedIn algorithm was manually modified to avoid this kind of drift.

I will skip the analysis of each of the emojis in this TOP 10, but know that almost all of them benefited from the effect of a limited number of viral posts. We are therefore facing a skewed statistical distribution, which is perfectly visible in the standard deviation values.

To eliminate this effect and find out which emojis get the most reactions, I imposed several constraints.

Constraint 1: the emoji must be present in at least 1000 different LinkedIn posts

The first condition I imposed was the number. The first TOP 10 contained emojis that, for some appeared in less than 20 posts. The emoji 🧎, for example (N°2), appeared only 20 times in almost 4.6 million posts.
By putting a limit of 1000 posts, the ranking changes dramatically. But it is still influenced by some very viral posts. For example, the standard deviation for the first 5 emojis is over 2000.
To obtain a more accurate ranking, a new constraint was necessary. 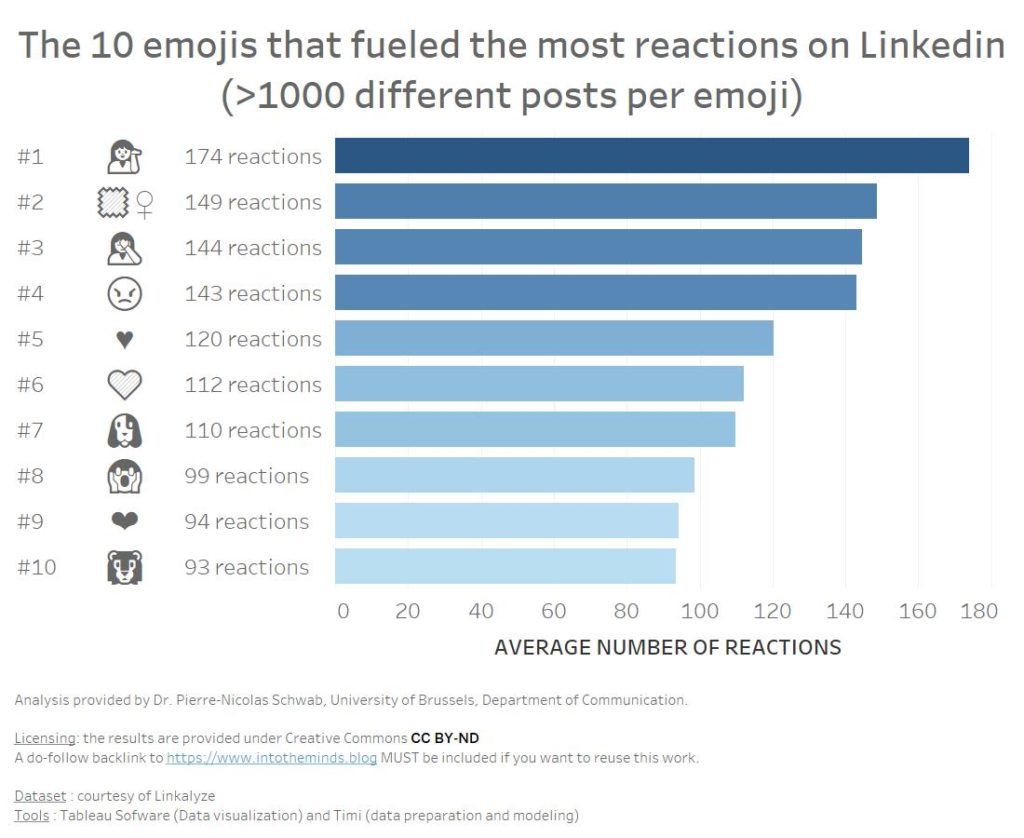 To limit the effect of highly viral posts on the rest of the population, I imposed a standard deviation constraint. I eliminated all results where the standard deviation was greater than 500. The changes are again quite telling. As you can see, the 1st and 2nd places are occupied by animals. 🐶 Is followed by 🦁. The latter makes the emoji used by L.I.O.N. (LinkedIn Open Network) followers, partly explaining the results.
The other emojis found in the TOP 10 are very much focused on the emotional state, which is a radical contrast to the first ranking where the 🐼 appeared. 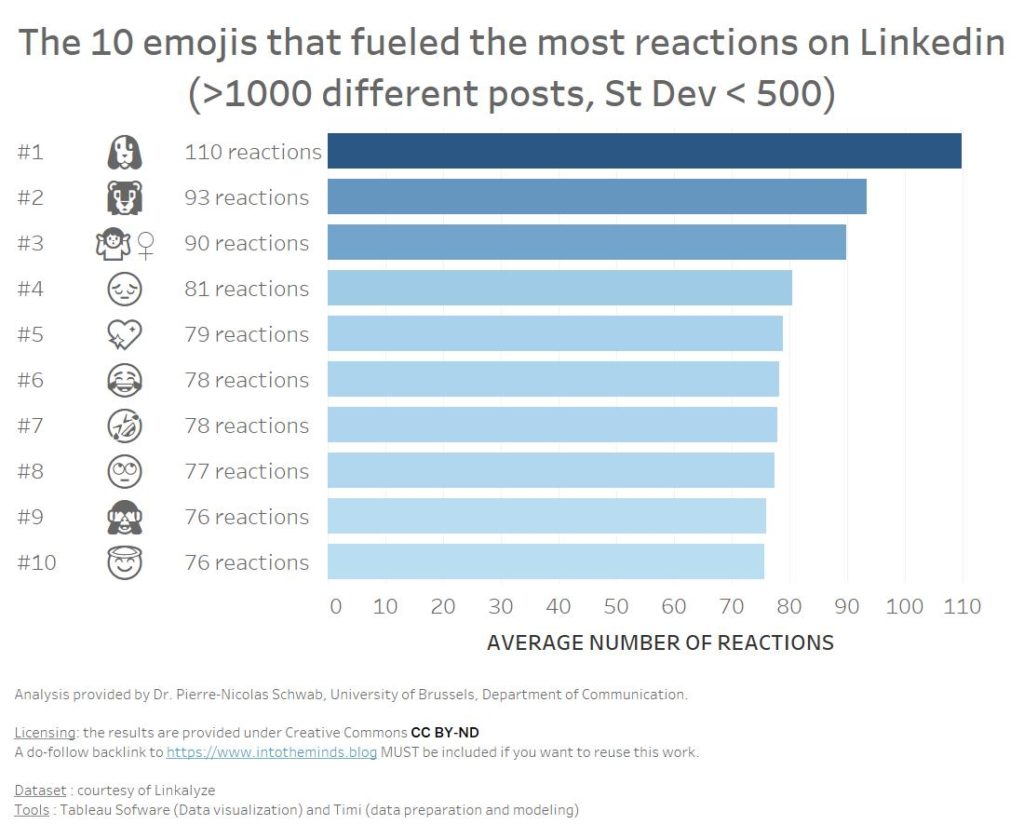 Through this data-mining exercise, I hope to have shown you that you should not always blindly trust the results of your data visualization. Instead, you have to take a critical look at the data and, if necessary, apply constraints to appreciate the reality of the results better.

I will test if a statistically significant correlation exists between these emojis and the observed reactions in a future analysis.