The most used emojis on LinkedIn [analysis and statistics]

If you’re passionate about LinkedIn statistics, don’t miss my other posts on the subject: hashtag statistics, the 3 factors that explain 55% of the virality of a LinkedIn post and the sentiments expressed in LinkedIn posts.

LinkedIn emoji statistics: the results in a nutshell

Everyone has loved and used emojis since Shigetaka Kurita invented them. Did you know that emojis are part of the permanent collection of the MoMA in New York?

Today they are used by everyone in all modes of electronic communication. LinkedIn is no exception, and I have shown in this analysis that emojis in LinkedIn posts positively affects virality.

But which ones are used the most? I’m sure you have an idea.

A few words on the methodology

The data preparation was realized using Anatella from Timi. Without this solution, it would have been impossible to achieve the desired result because the dataset (4.6 million LinkedIn posts) is quite large. The extraction of the emojis requested some quite specific manipulations that Anatella simplifies greatly.

2.932 million emojis were extracted from 4.6 million LinkedIn posts in 30 languages and 183 countries. A Regex expression was used (thanks, Frank!), which I described in this post. The visualizations were realized using Tableau. 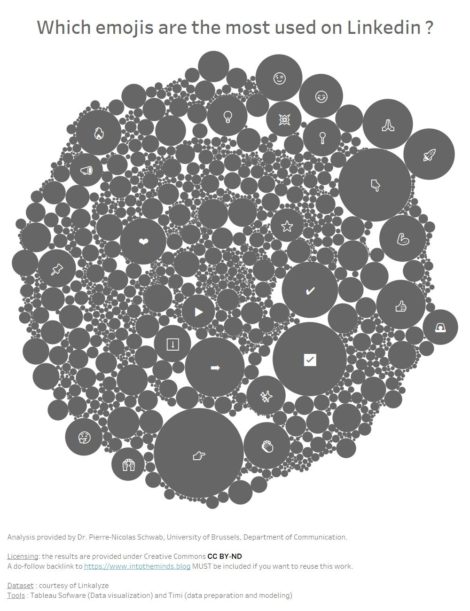 The most used emojis on LinkedIn

The 1st analysis gives an overview of the most used emojis on LinkedIn. I reused the same type of visualization above for my work on hashtags. Click on it to enlarge it. 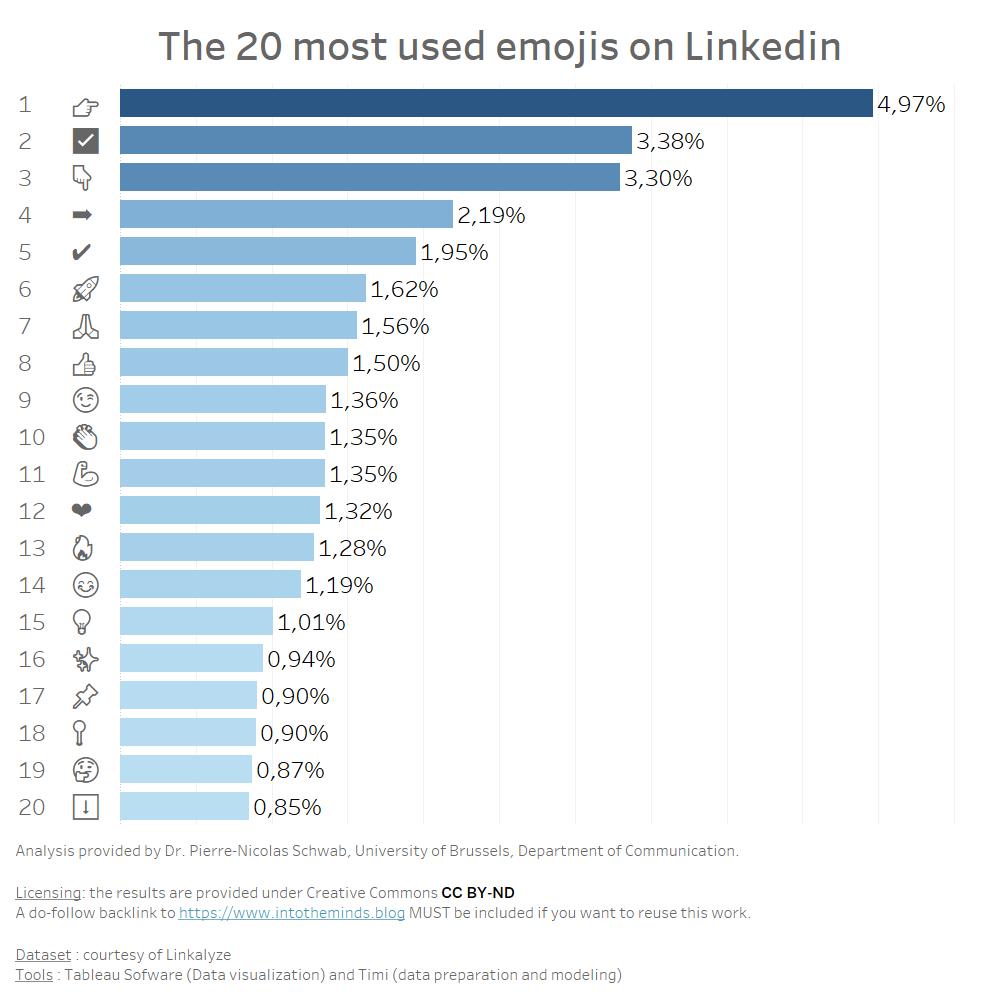 Emojis are not used in the same way in all languages

In the second analysis, I wanted to understand if emojis were used in the same way in all languages. I used the language detection module in Anatella (based on the CLD2 algorithm) to enrich the dataset.

I was then able to realize using a ranking (Top 7) of emojis according to the language. I limited my analysis to languages for which I had a sufficiently large sample (at least 10,000 posts). 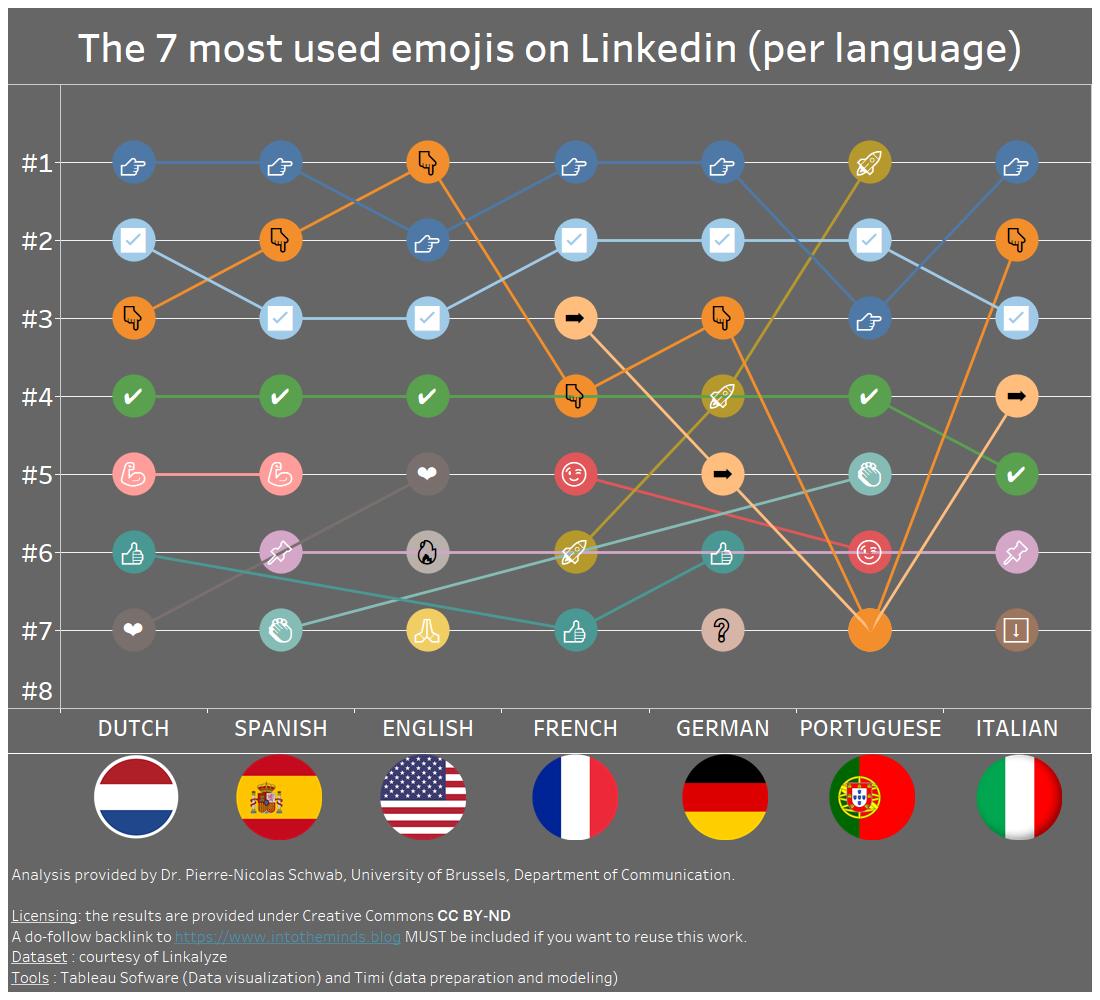 The most used emojis on LinkedIn according to the country

It is also possible to repeat the previous analysis based on the country entered in the authors’ profile on LinkedIn. If overall we see a convergence with the analysis by language, we note differences such as the presence in the TOP 7 of 5 countries of the emoji 🚀. 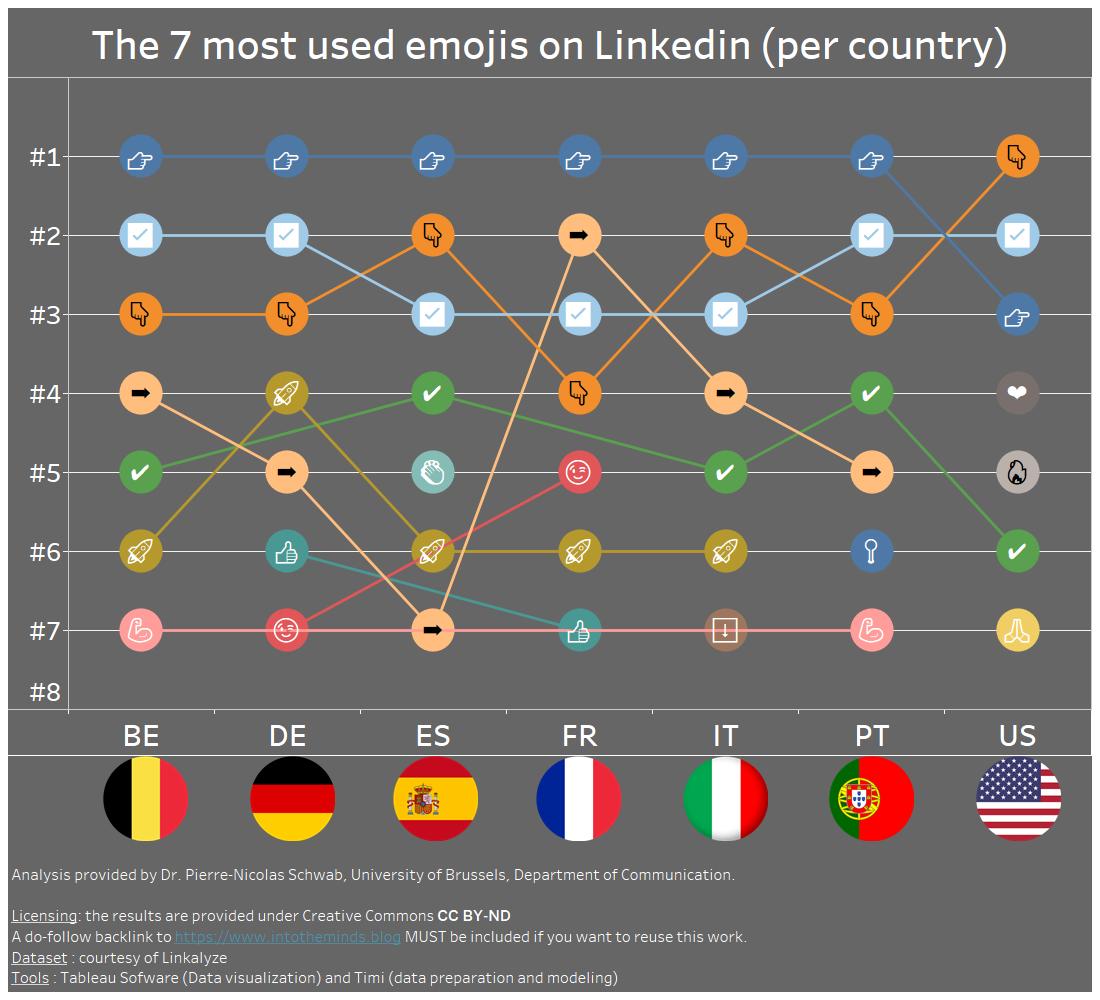