Home » Data & IT » LinkedIn: engagement statistics by country and language [2021]

How does engagement on LinkedIn vary by language and country? Globally, 71.06% of LinkedIn posts receive no comments, and 24.39% receive no likes. The analysis of 4.599 million LinkedIn posts gives us an objective view of the essential differences that exist.
The data comes from a dataset made available by Linkalyze. The data preparation was realized using Anatella (Timi) and the visualization using Tableau.

If you are interested in these results, do not hesitate to subscribe to my newsletter, on which I publish other unpublished statistics. To subscribe, enter your email address below. Don’t forget to confirm the link sent to you by email; otherwise, I won’t be able to send you my latest results.

Some statistics on comments and Likes on LinkedIn

What is the average number of likes and comments per LinkedIn post?

The average number of Likes and comments varies greatly depending on the language. In our dataset, we have found LinkedIn posts in 15 languages. The figure below shows the results. Czech was the least represented language with 6256 posts, and English the most represented with 2.556.617 posts.

We can see that French is the language for which LinkedIn posts get the least amount of likes on average: 2.1 comments and 17.8 likes. Indonesian is at the other end of the spectrum, with 8.7 comments and 48.5 likes. 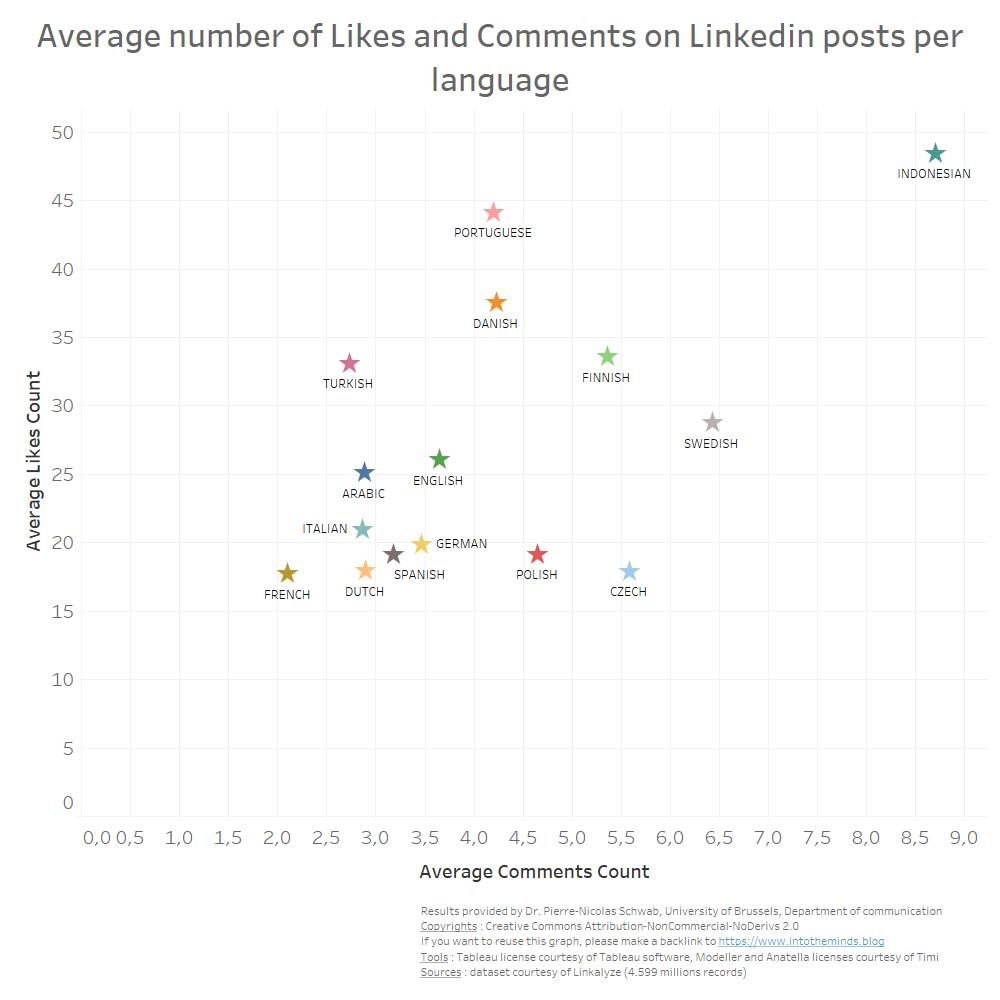 Distribution by language of the number of comments on LinkedIn

The analysis of the distribution of comments by language offers a different reading of the phenomenon. Whatever the language, the majority of LinkedIn posts do not get any comments. But this reality differs according to the language, as you can see on the graph below (in red, the proportion of LinkedIn posts that receive no comments; in green, the one that receives more than 20).
Differences of 30 points can be observed between Finnish, Czech, and Swedish on one side and French, English, or Spanish. 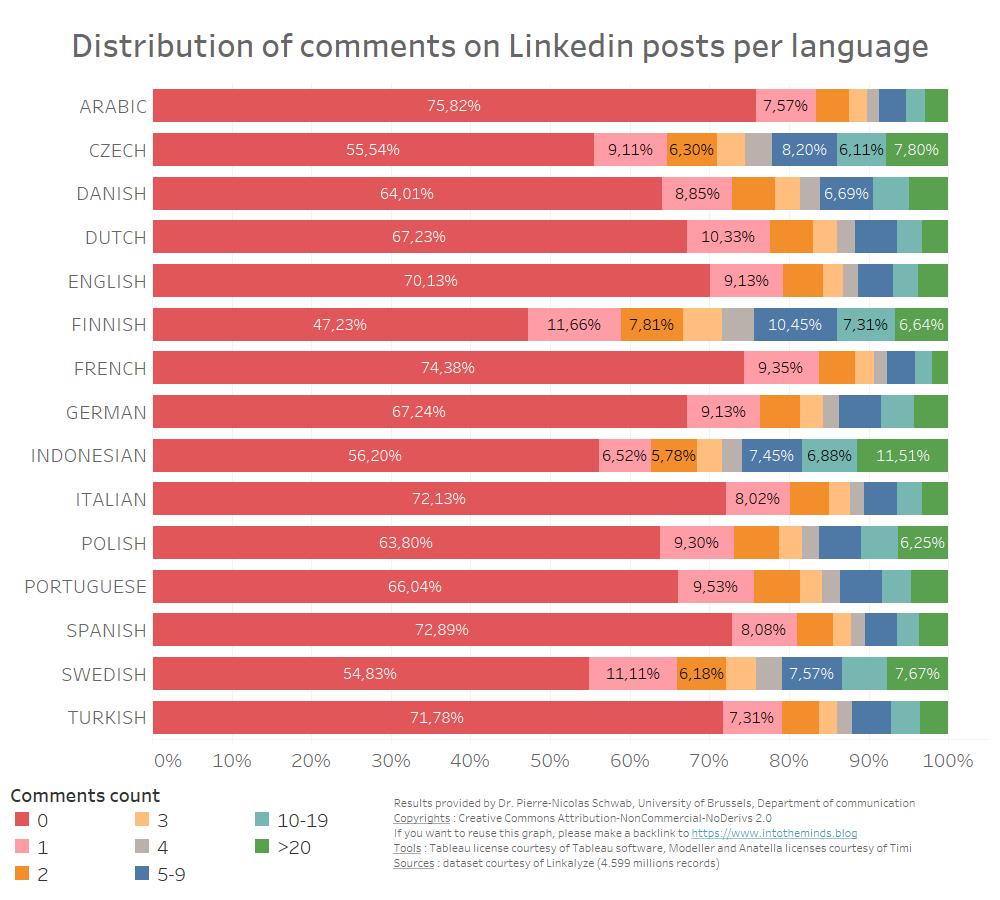 Distribution by language of the number of Likes on LinkedIn

The disparities by language are also observable for Likes. The difference is particularly noticeable between Arabic and Finnish.
In English, French, and Spanish, almost 1/4 of the posts do not get any likes, a ratio that is only exceeded by posts in Arabic (33.16%). 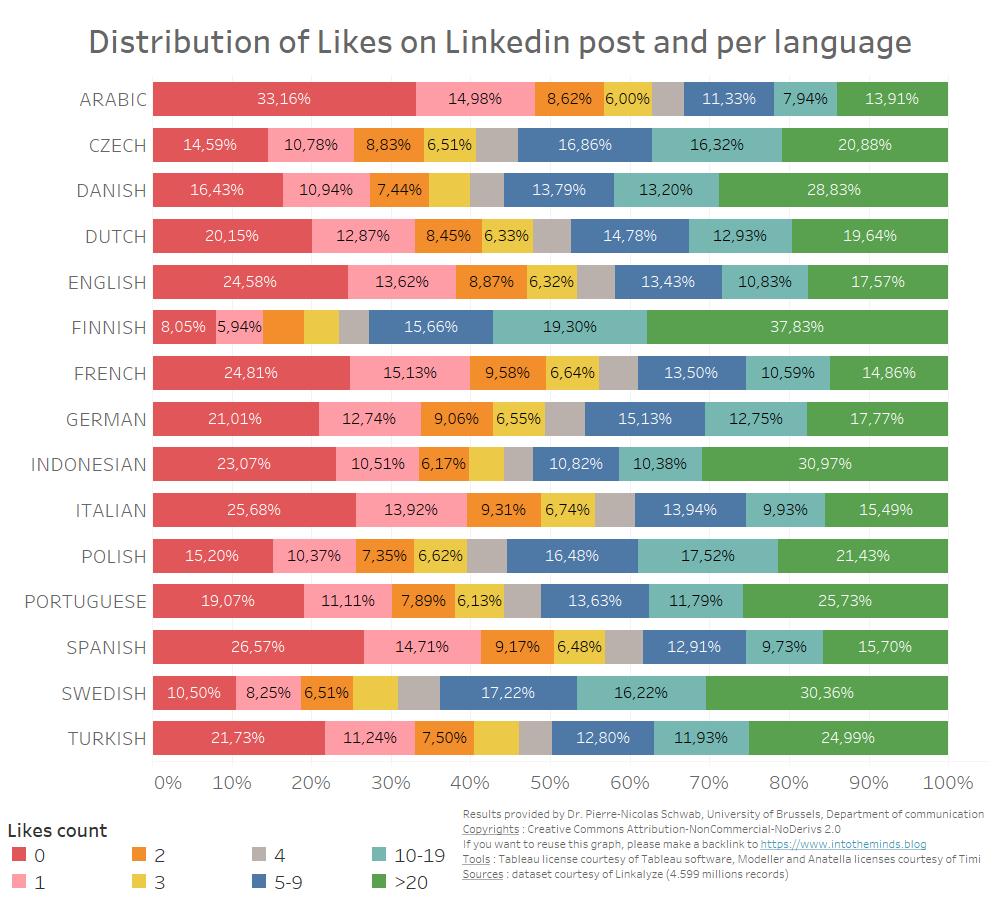 In which countries do we get the most likes on LinkedIn?

Not all countries are equal in terms of likes on LinkedIn. Here is what I discovered when analyzing the results for the 193 countries in the dataset.
To abstract the extreme data in some micro territories, I chose to represent the data as quartiles. In other words, the data were normalized and then assigned to a segment based on their value.
This visualization by quartile is handy when some extreme values (outliers) “erase” the differences that may exist. For a complete discussion on the subject, I refer you to this article.

This map allows us to visualize to which quartile each country belongs. Thus, becoming aware of the differences between territories in terms of likes. 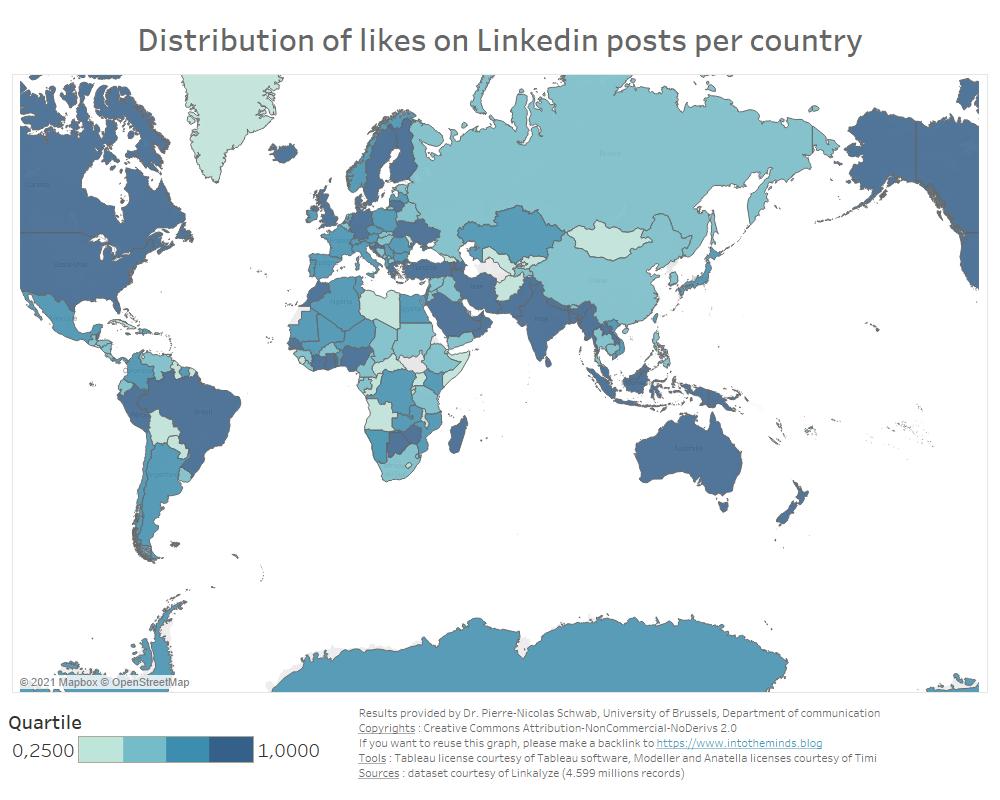 In which countries are LinkedIn posts most commented on?

We repeated the same analysis with the average number of comments on LinkedIn, and as you can see, differences appear between the two maps. With 3.3 comments on average on each LinkedIn post, Russia is, for example, in the top quartile while it is in the 2nd quartile for likes (10 likes on average per post). 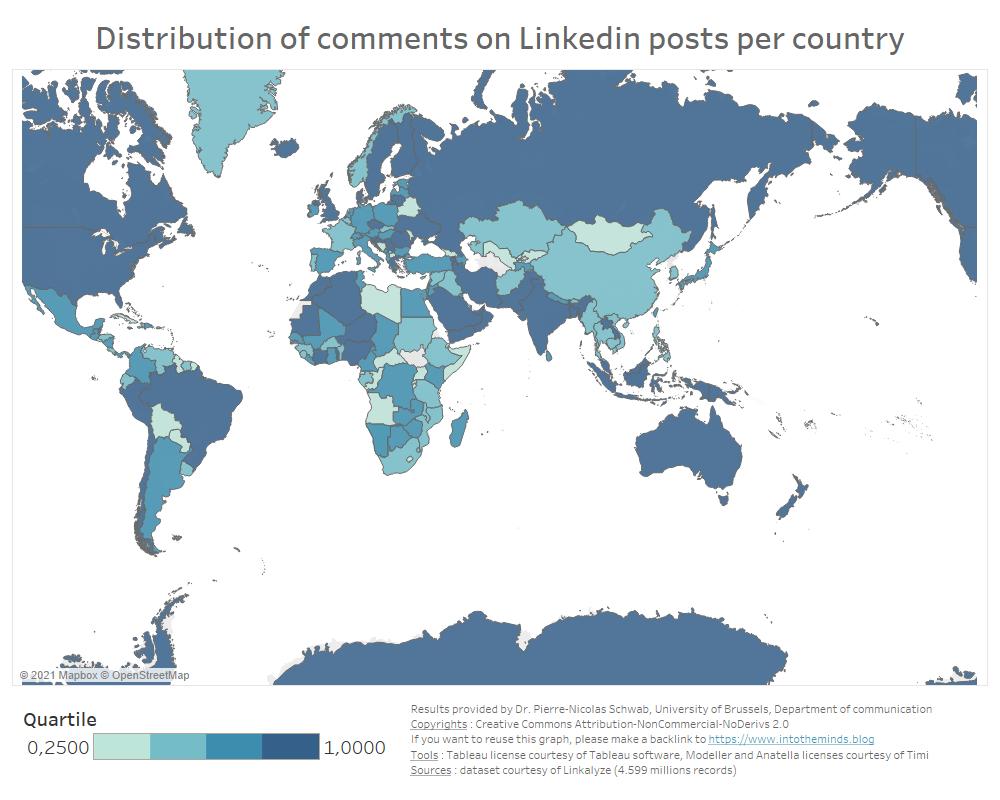 Statistics on comments and likes by country

Finally, I propose to visualize on a “scatter plot” the position of each country regarding the average number of likes and comments.
I had to eliminate some extreme values (Virgin Islands, Tonga, Belize) so that the graph remains usable. For each country of the world, you can access the statistics for the LinkedIn posts published there. Their ISO code indicates the countries. Click on the image to enlarge it. 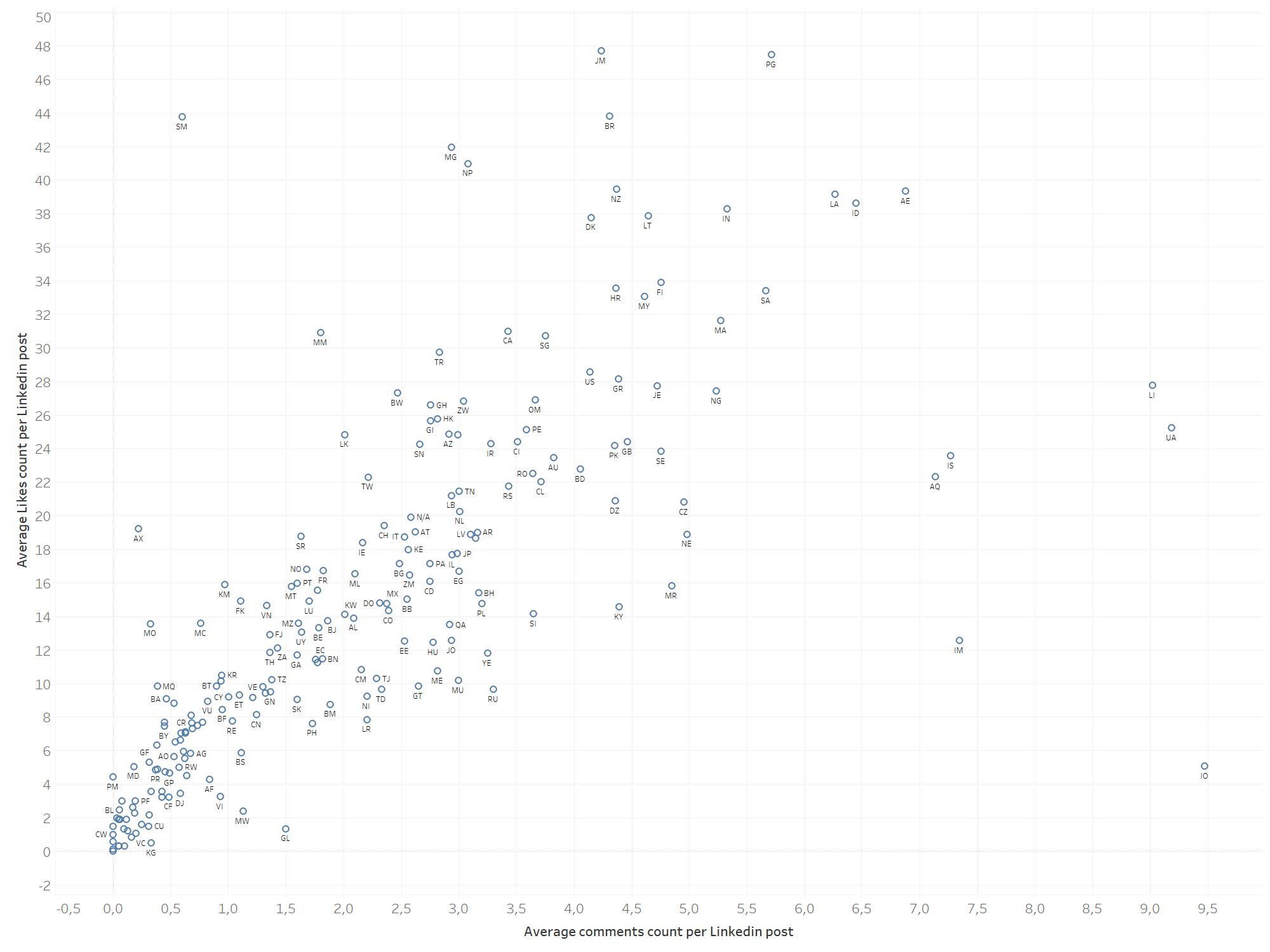