Linkedin’s engineers published the recipe for their new algorithm on May 12, 2020. The least we can say is that it completely changes the practice of making a post go viral. If you want your LinkedIn posts to be seen (and incidentally become popular), read the following carefully. See also the “data” analyses that we dedicate to the factors that boost visibility on Linkedin: hashtags, word count, emojis.

In a nutshell (if you only have 30 seconds)

The consequences for you

LinkedIn is deploying a new version of its algorithm. The rules of the game to increase the reach of its posts are changing. The likes and comments that made a post go viral have been abandoned in favour of another metric. As a result, the opening rate of external links will decrease further. As I showed here, the rate was barely 1.39%.

Why change the rules of Linkedin’s algorithm?

Until now, the LinkedIn algorithm used 3 types of explicit feedback to score and recommend the publication. These 3 factors were:

The formula was simple, too simple. So, it was easy to hack, mainly thanks to engagement pods, groups of people who like and comment on posts from their community.

In practice, how does Linkedin’s new algorithm work?

The LinkedIn developers are kind because they explain their recipe to you. To make it simple, they have determined a minimum time (T skip) that characterises the materialisation of possible interest for a post. If the time you spend on a post is less than T skip, you are deemed not to show interest in the publication.

The graph below gives an account of their work. 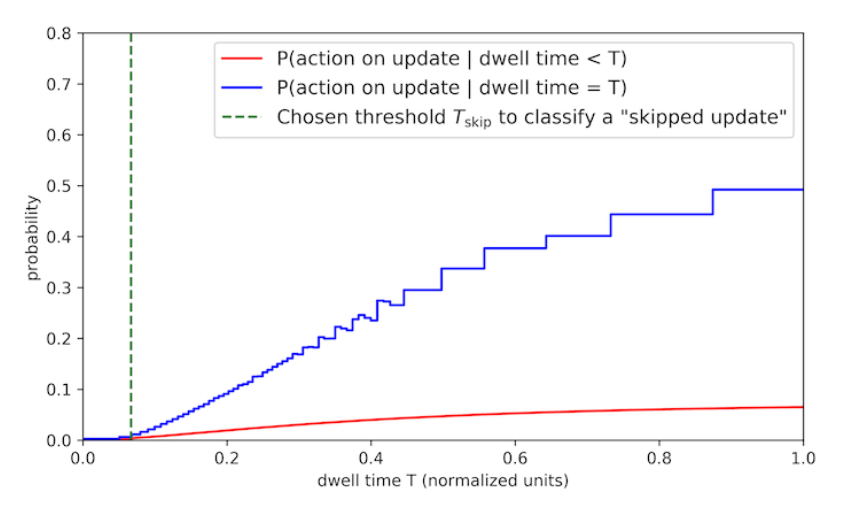 Reactions (likes, comments, sharing) are only visible signals of interest in a LinkedIn publication. Interest grows with the time spent on the publication. The likelihood of receiving a like, comment or share also increases.

What difference does this make to my use of LinkedIn?

If you are, like 99% of LinkedIn users, a content consumer rather than a content producer, the new algorithm should, in theory, offer you more content to suit your tastes. Sorting will be done based on your past interactions.

If you are a content producer, Linkedin’s new algorithm will revolutionise your use of this social network. Indeed, you will have to think about how to engage the community, how to get your posts noticed and how to increase interaction time.

What content should I prioritise to take advantage of Linkedin’s new algorithm?

The LinkedIn developers’ article gives us some food for thought on how to do this. The results have been classified according to the type of content. I was surprised to see the images seem to make people react more quickly and more frequently. All other things being equal, we note that the probability of reaction with an image (P=0.3) is 50% higher for the same normalised viewing time (T=0.2) as an article or a video. 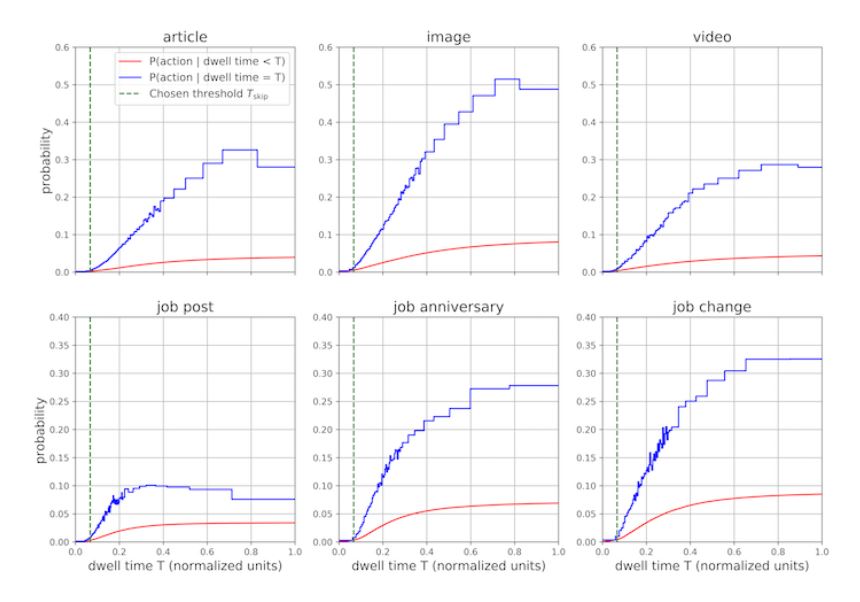 The second thing we learn from the simulations is that articles are slightly more effective than videos at T>0.6.

So, it seems natural to want to combine image and article to combine their effects.

How to maximise the chances of going viral with Linkedin’s new algorithm?

From the information distilled above, it appears that it is now necessary to prepare one’ s content to increase the interaction time. We can, therefore, exclude short contents, hypertext links without explanations, …

In my opinion, it is necessary to proceed as follows:

Small format presentations are a type of content that I think is particularly suitable for generating engagement, provided they are explicitly designed for LinkedIn. I still see too many people putting presentations online without touching them up: cluttered content, fonts that are too small, neutral colours… If you want to stand out and grab attention, there’s no secret: you’ll have to work and make some effort in terms of design. You will find below an example of a presentation I created for the French version of my May 25 article. I’m not saying it’s perfect, but I tried my best to respect my audience by offering them a visually appealing and synthetic content.

What is clear is that it is far from the time when the same content could be posted on different social networks without being edited. Today you have to adapt your content to each social network, but you also have to keep up to date with the latest algorithms. This monitoring work is essential for those who still want to animate a community, especially on LinkedIn.