Netflix: development and expansion outlook for 2020

Netflix’s growth is decelerating, mainly driven by market share gains outside North America. Netflix boss Reed Hastings is preparing the financial community for lower than expected financial results. This is what emerges from the 2019 last quarter results presented by Netflix last week. We analyse these figures in today’s article, and we are now predicting Netflix’s medium-term business strategy. Our forecast is for a decline and loss of market value in 2020.

In this article that I wrote in January 2020, I mentioned the possibility of Netflix using an advertising-financed model as a growth relay. Faced with fierce competition, Netflix had started by publishing its audiences to reassure investors of the relevance of its model.

April 19, 2022, will remain a dark day in the history of Netflix stock. The stock has lost nearly 25% in one session following the loss of 200,000 subscribers in one quarter. While analysts expected a gain of 2.5 million subscribers, the crisis and consumer arbitrage are catching up with Netflix. The model with advertising has never been so topical to win new customers.

With inflation, household morale is at its lowest. It is therefore expected that they seek to rationalize their spending. Knowing that American households have, on average more than 2 subscriptions to non-linear TV operators, Netflix is paying the price. This is all the more damaging since, in addition to its 220 million paying subscribers, it is estimated that nearly 100 million take advantage of Netflix without paying (notably via the undue sharing of a family subscription).

Netflix results for the last quarter of 2019

A model with advertising: the three converging factors that will support this hypothesis.

We predicted a few years ago that Netflix would one day introduce a freemium model, financed by advertising, to support its growth. In 2020, 3 factors seem to us to confirm this scenario more and more:

We detail each aspect below.

Netflix’s production costs make you dizzy. Seventeen billion in 2019 and between $20 and $30 billion per year in the not so distant future. The BBC has already laughed at these amounts since it said it would produce 18 series for the price of one at Netflix (see the screenshot of the tweet below). 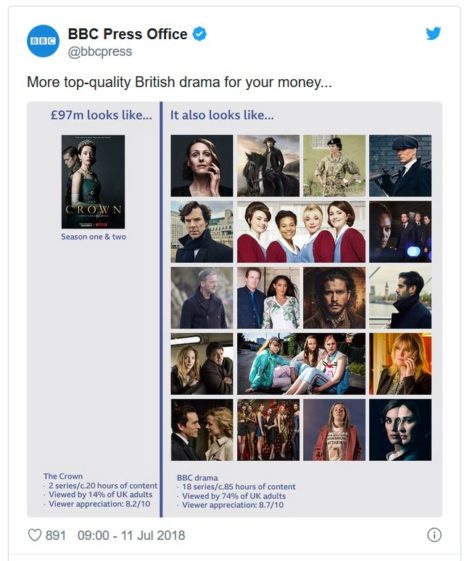 Investment in production is necessary to keep customers and ensure their loyalty. However, it is questionable whether Netflix’s expenses are excessively expensive and whether they will have an impact on the survival of the business model. As Paul Lee (Deloitte) pointed out in one of our podcasts, the explosion in content-related costs can only be sustained in the long term through advertising funding. We encourage you to listen again to this podcast, which heralds a future where advertising will be even more present.

A slowdown in development

We are, of course, talking about the growth of Netflix in general, and the increase in the number of subscribers in particular. Netflix’s business model has so far been supported by growth in its core market, North America. This is a specific market where consumers are used to paying significant amounts for access to television and private channels. Netflix’s offer provided substantial added value for a very reasonable price. The equation is different in other markets where consumers are used to paying less. So, what we see now is a depletion of the natural customer base. Netflix’s growth, therefore, comes 90% from foreign markets where acquisition costs are necessarily higher (heterogeneity of demands, consumer expectations, competition). Netflix, therefore, uses up more cash than it can generate. In 2019 Netflix consumed $3.3 billion more than it earned. Cash flow in the 4th quarter was negative (-1.7 billion dollars), pushing down the previous reference figure (-1.2 billion in the 4th quarter of 2018).
The figures, therefore, show that Netflix is entering a race for gigantism in the face of increasing competition, which has every intention of putting pressure on it.

The competing bid that hurt Netflix very badly was the Disney bid. At $6.99 per month, Disney + has already garnered 24 million subscriptions in one month (I repeat: 24 million in one month!!). And it’s only just beginning. Warner Media is preparing the launch of HBO Max, and Comcast NBC Universal is preparing the launch of Peacock. In other words, the year 2020 is going to be very complicated for Netflix.

2020 is going to be a pivotal year for Netflix with a combination of adverse factors. The financial situation will worsen due to a slowdown in the acquisition of new subscribers on the one hand, and higher production costs on the other. Also, competitors will attack Netflix head-on in 2020 and will take market share from it, further worsening its financial situation by undermining economies of scale.

It would therefore not be surprising to see Netflix launch into a new battle, that of conquering less wealthy markets with an advertising-sponsored offering. But fortunately, Netflix’s recommendation algorithm, so robust in building customer loyalty, will not be affected. The importance of the algorithm should even be reinforced since a new objective, beyond allegiance, will be the conversion of subscribers from the freemium model to the pay-as-you-go model without advertising (whose rates can also be expected to increase).