COVID-19 : 9 specific impacts on the advertising industry and its future

Home » Strategy » COVID-19 : 9 specific impacts on the advertising industry and its future

In our analysis, we, therefore, propose to address:

In the second part, we will go a little bit overboard, and we will also look at the changes in terms of marketing and communication after the Covid crisis.

Today’s analysis is part of series we devoted to the impact of Covid-19 on different industries:

Subscribe to our newsletter to get tips and insights to win in the post-covid era.

The coronavirus crisis has put a brutal halt to advertising investments, whatever the medium. The drop in advertising revenue ranges from 50% (television, radio) to 99% (billboard) during the weeks of confinement. As we showed in our other analysis, the impact of the COVID on the media, the annual decline in advertising revenues is estimated at:

The WFA (World Federation of Advertisers) released a study in Mid-May that predicts a 31% decrease in investments for the year 2020. This is 10 points more than our worst predictions of early May.

The entire advertising ecosystem has been put under pressure and is feverishly awaiting deconfinement. With the latter comes the hope of a revival of the advertising market.

The current impact of COVID on the advertising industry

The advertising sector was one of the first to be affected by the coronavirus crisis, as advertising investments were cut back. In this section, we will successively discuss the financial impacts and then look at the visible consequences in terms of advertising messages.

I asked Bruno Liesse about the situation in the sector. He distinguishes 3 scenarios:

It is estimated that the coronavirus crisis if it ends in May, will lead to a 10% drop in advertising revenues over the whole of 2020. As an example, M6 (France) estimates its annual decline at 9.2%. In France, advertising agencies lose €60m of turnover every week, according to Jean-Luc Chetrit, the head of the Trademark Union. The fall in advertising revenue is between 40 and 90% depending on the type of media over March and April (the impact on April is, of course, total since the confinement started only in mid-March, leaving about ten days of respite.

According to the agencies we interviewed, the vast majority of advertisers have moved their campaigns around while waiting for a more detailed picture. It is also apparent that in such a context, brands are incredibly cautious when it comes to communication (see below). The relocation of these campaigns has the consequence that commitments made to the media at the beginning of the year cannot be respected. Intensive negotiations are currently underway to review the necessary contracts. The advertising agencies are very much in demand by clients, but not for “billable” projects. This is a matter of monitoring and advice on how to manage the situation.

Advertising investments: a lot of reductions and a few increases

Of the 44 advertisers for which we have figures, 75% have reduced their advertising investments in April 2020. On the contrary, 25% took advantage of the period to increase them, sometimes in very significant proportions. Apart from the official “advertisements” (those made by the authorities), the increases sometimes reach 250%. The brands that have overinvested during the confinement are active in traditional retail (except for low-cost retail), FMCG, home furnishings, internet and mobile access. A significant exception is Coca-Cola, which has completely stopped its advertising investments.

75% of advertisers have reduced their advertising investments in April 2020.

For most companies in the sector, three fifths (or even one half) has become the rule because advertising investments (on which a percentage is taken) have melted like snow in the sun. Depending on the agencies, the figures we have had access to show an impact, over April 2020, of -54% and -91%. The brands in the portfolio explain this reasonably wide variation; some are more affected than others depending on their sector of activity.

The largest agencies are already resorting to temporary unemployment, and savings plans have been announced. Publicis, for example, has announced a global savings plan of €500m. This plan will result in a hiring freeze, a reduction in the use of freelancers and the taking of holidays during the crisis. Redundancies are to be feared but would be very harmful in case of market recovery. Indeed, in the event of a sudden market upturn, there is a real risk that those who have left the market cannot be immediately reintegrated. This is particularly risky for creative people. All the agencies we interviewed have seen a significant (but slight) increase in budget investment since last week.

In the absence of economic activity, advertising content has had to be adapted. The brands that continued to advertise, therefore, reoriented their messages to give them meaning in a particular context. Bruno Liesse compiled the advertisements during the coronavirus crisis. This compilation (which can be consulted below) makes it possible to distinguish 5 trends in advertising messages:

Medium-term effects of COVID on the advertising industry

First of all, we believe it is essential to use a tangible indicator to anticipate the future. This indicator is the American consumer confidence index. If (American) consumers are confident about the future, they will buy, businesses will make money, and the advertising machine will start to run again. As can be seen from the index calculated by the University of Michigan, a low was reached on April 21. The American consumer has, therefore, never been so pessimistic since February 1, 2020 (index = 71.8). 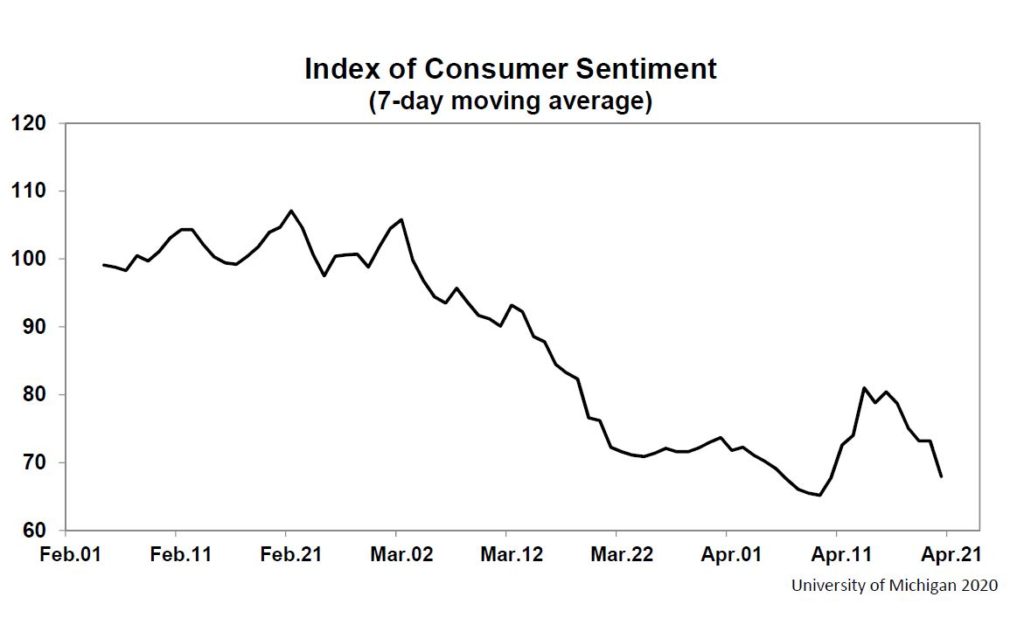 However, this low score should be put into perspective by looking at the confidence index over the last 50 years (below). As you can see, we are still very far from the levels reached in 2008. So, there is still hope. 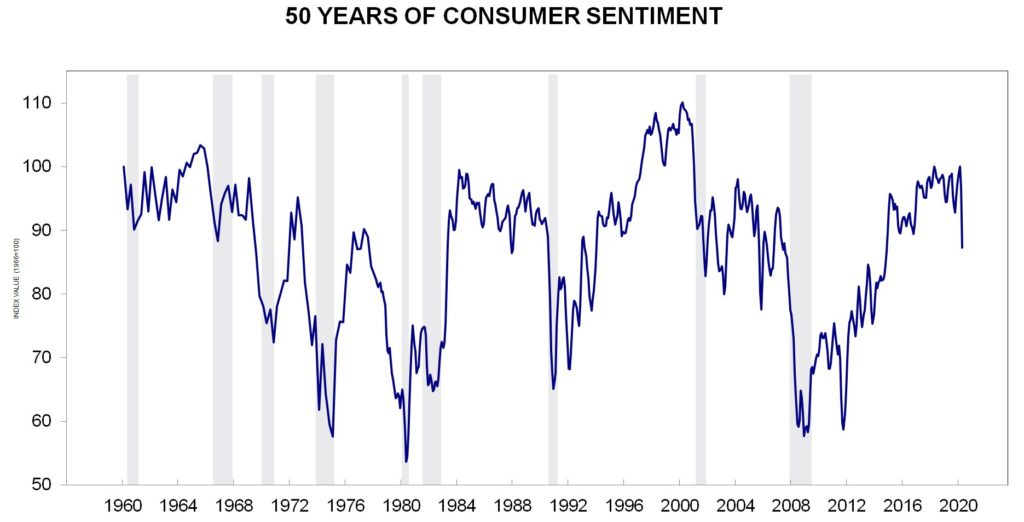 The health of the advertising market is correlated with the health of the economy in general. The IABM conducted a survey of media professionals which shows that the vast majority of them expect a decline in advertising revenues. It is likely that even in 2021, advertising revenues will come under pressure. Negotiations will indeed be fiercer to respond to the budget-saving measures decreed by advertisers. Overall, we can also expect advertisers to demand more tangible evidence of the scope of their advertising. Data, the drive-to-store, will be a crucial element in the advertising sector in the coming years (even more so than now).

Let’s now look at 3 other medium-term effects of COVID on the advertising market.

It is now a given that travels within Europe will be somewhat limited until the end of the summer. The French Prime Minister has called on his compatriots to spend their holidays in France, and each country has followed or will follow suit. As a result, for northern countries, usually deserted by their inhabitants during the summer period because of holidays in southern Europe, the difference will be palpable. The advertising market hope, therefore, use the months of July/August to “recover” and make up for the 2 months lost in confinement. If the populations are “captive” during the summer, we might as well try to communicate with them.

The year 2021 could represent an opportunity to streamline programmatic tools. Currently, the production chain is fragmented, using too many tools, according to Alexis Faulkner of Mindshare. Solutions could, therefore, emerge that would make it possible to simplify and cut costs. Sylvie Izri, the boss of IPG Mediabrands, does not believe in this. According to her, the tools used by the agencies are those integrated at the clients’ sites. A streamlining of tools is therefore meaningless, as opposed to a streamlining of skills. In the future, the larger agencies could “lend” skills to other subsidiaries. Work peaks in one country could be absorbed by a temporary (remote) transfer of labour.

Towards more meaning in commercials?

Here’s wishful thinking that has been trying to come true for years: brands should try to be more “meaningful” to get closer to their customers. The coronavirus crisis could accelerate the fulfilment of this dream. As we explained in our first prospective analysis, consumers are already returning to more local, reassuring consumption. Brands will need to understand what this quest for meaning means to communicate correctly and keep their share of the market.

In an immediate and almost general move, advertisers have stopped their advertising investments. While most campaigns were postponed, some were stopped. Agencies saw their billing shrink very sharply, leading to cost-cutting measures. Hopes rekindled with the deconfinement and with the summer period which, for the countries of northern Europe, will rhyme with holidays on the spot. Brands could, therefore, reinvest.

The behavioural changes brought about by the crisis could, however, lead brands to review their copy in terms of advertising messages. Consumer expectations are changing: the need for reinsurance, refocusing on essential components such as the family and the home. In the end, in-depth work will have to be done to restore meaning to advertising and display a coherent discourse in terms of values.