COVID-19: 7 specific impacts on the future of the aviation sector

Home » Strategy » COVID-19: 7 specific impacts on the future of the aviation sector

Drastic reduction of fleets, staff cuts, accelerated closure of unprofitable subsidiaries, adjustments to security measures and sluggish demand. This is what awaits the airline industry. The COVID-19 crisis will have an impact for years, and the market will take years, perhaps a decade, to return to pre-crisis levels.

In this article, we propose to analyse the domino effect that the paralysis of air traffic will have. You will discover in our analysis the concrete consequences of COVID-19 on the different aspects of the air sector. Fasten your seat belt; it’s going to get bumpy!

Europe’s major airlines will lose at least 50% of their turnover and passengers in 2020 compared to 2019. The fault lies with the confinement that grounded the planes. In the very short term, this scenario is likely to worsen if, in mid-May, the European Commission makes social distancing onboard compulsory. This would lead to only two-thirds of the aircraft being filled. At a 66% load factor, no airline can be profitable since the break-even point is in the order of 70 to 80% depending on destinations and competitive pressure. Another short-term threat is the closure of borders, which would prevent flights between countries. The combination of these two factors could lead to the bankruptcy of dozens of airlines.

At the beginning of November 2020, the Norwegian low-cost airline company has been refused several billion kroner in aid by the Norwegian government. This aid was intended to keep the company afloat, even though it had already cut its costs and eliminated 80% of jobs (8,000 redundancies).
Norwegian had obtained an initial state aid plan in the form of a 3 billion kroner (€280m) loan as well as the conversion of part of its 4.3 billion kroner debt.

For March 2020, the period that saw the first bans put in place, few figures are circulating. The Lufthansa Group (including the airline of the same name but also the Swiss national airlines Swiss, Austrian Airlines, Eurowings, Brussels Airlines and Air Dolomiti) and the IAG Group (British Airways, Iberia, Vueling, Aer Lingus and Level) have not yet published figures. Ryanair, Europe’s No. 1 in terms of passengers (see graph below in this article) has seen its traffic fall from 10.9 million passengers in March 2019 to 5.7 million in March 2020. This corresponds to a drop of +/-48%. As far as EasyJet is concerned, the fall is of the same magnitude (-49.5%, from 7.7 to 3.9 million). Turkish Airlines lost 52.5% of passengers, from 5.9 to 2.8 million, Air France 58.6% (4.35 to 1.8 million). Norwegian Air, which lost 61% of its traffic (from 2.96 to 1.15 million). 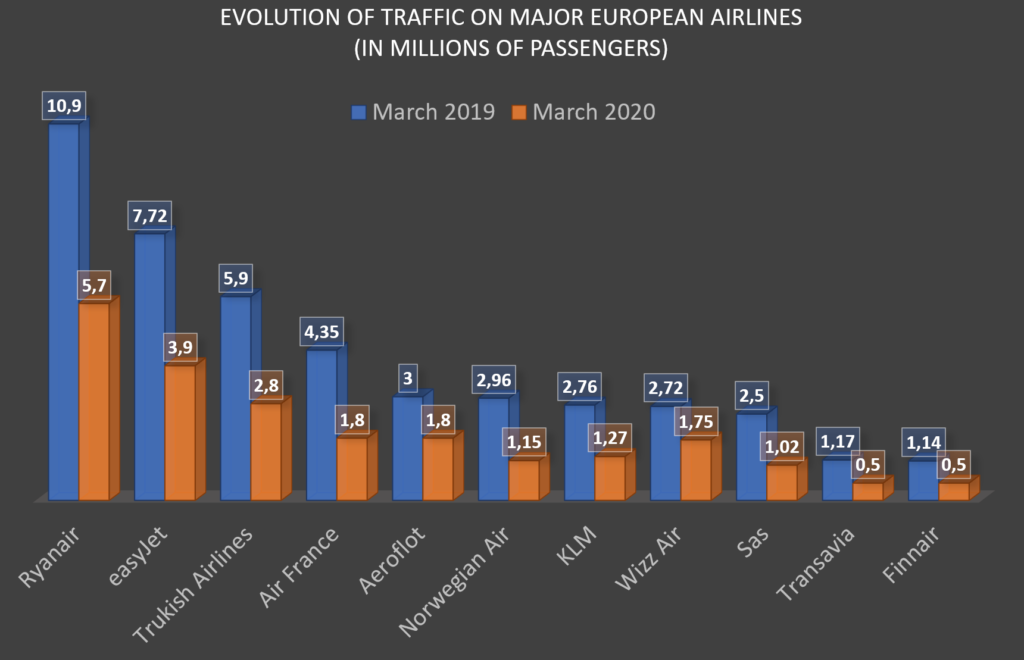 Planes on the ground, cash is flying out the door

The decline in traffic over the year 2020 should reach 50% and in April 90%. While aircraft remain on the ground, fixed costs continue to run. Here’s what the different airlines or groups are burning each month: 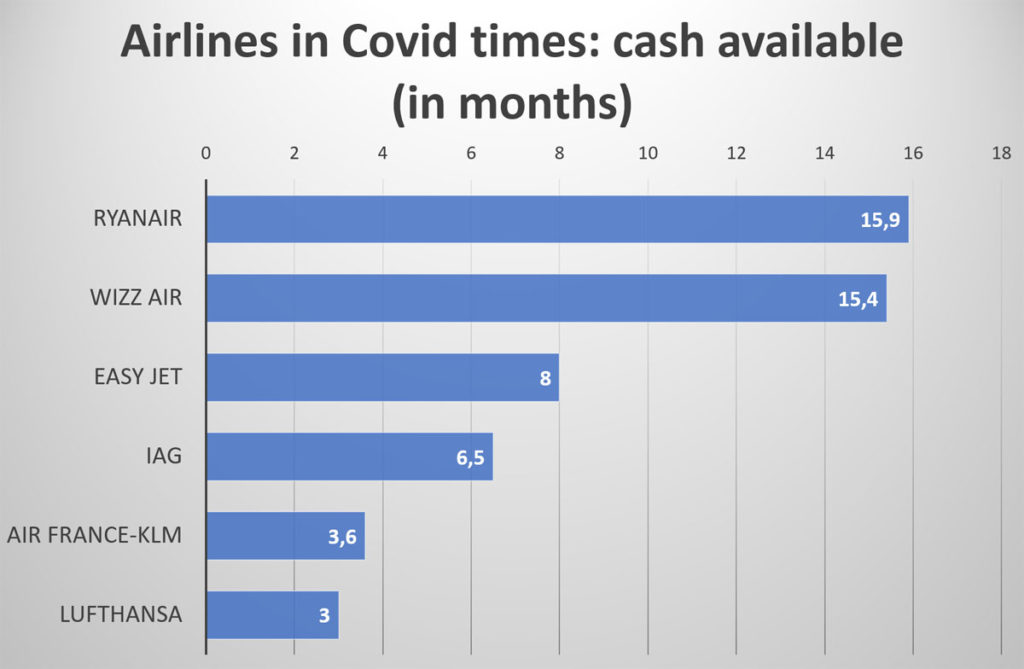 How long will European airlines be able to hold out?

Taking into account the rate at which airlines are burning cash (see below) and their reserves, here is the number of months of available reserves that European airlines have in front of them:

It is therefore clear that the large low-cost companies are the best armed to resist the Covid-19 crisis. The traditional companies are in the eye of the storm. This will have, as you will see below, severe consequences in terms of consolidation in the airline sector.

Lufthansa was the first company to announce measures to combat the economic impact of the coronavirus:

The restructuring plans of Austrian Airlines, Brussels Airlines and Swiss will be speeded up, with a reduction in the fleet of these airlines as well.

The alarming statistics of the airline industry during the Coronavirus crisis

The figures published by IATA will make you dizzy:

What will the airline industry look like after the COVID-19 crisis?

The projection exercise is, of course, complicated, but we can venture a few predictions, in descending order of probability

One of the most likely consequences, inherent in the massive indebtedness of airlines and the profitability of air transport, is the bankruptcy of many companies. Massive consolidation will follow. However, one may wonder about the US market, which already has only four airlines: three traditional airlines (American Airlines, United, Delta) which account for +/- 53% of the US domestic market and 48% of all national and international traffic. One low-cost airline (Southwest Airlines, 15% of the domestic market, 11% of the overall market). This extreme situation is the result of a consolidation process which began 40 years ago with Jimmy Carter’s Deregulation Act of 1978. How, therefore, could we go further than that in the United States? Of the 3 traditional airlines, Delta is the most profitable (14.07% against 9.9% for United and 6.3% for American Airlines). In the end, it is American Airlines which is the least profitable because its debt is massive ($34 billion). It is, therefore, the number one candidate for bankruptcy, a situation it had already experienced in 2011. We can, therefore, expect to see only 2+1 airlines remaining in the United States. In Europe, only the large national airlines will survive thanks to temporary nationalisations or massive cash injections. But for the smaller companies (especially those that have been absorbed by the Lufthansa group), we can legitimately wonder. If they survive (which I believe they will), it will only be at the cost of significant restructuring plans.

Aid for the aviation sector:
which airlines have benefited the most?

In this insert, we present the amount of aid received by the 17 largest airlines in the world. In brackets, we indicate the number of passengers transported in 2019 (in millions).  The figures make you dizzy, and one can legitimately wonder about the repayment of these loans. In a ravaged sector, with already thin margins, how will the airlines be able to repay?

The psychological after-effects caused by confinement and Covid19 will lead consumers to modify their behaviour, particularly concerning mobility. Planes, which are confined spaces, will be abandoned in favour of private means of transport. Aircraft occupancy rates will therefore fall, leading airlines to reduce traffic and eliminate direct routes.

Passengers will demand new measures to ensure their health safety inside the aircraft cabin. This could take the form of pre-boarding checks, including systematic temperature checks. But it is also conceivable that more widespread monitoring could be introduced, in the form of electronic bracelets to detect variations in vital signs. Systems for massive remote temperature monitoring are currently being tested or already developed. Baidu, for example, has developed a method for scanning the temperature of 200 people per minute. Airports lend themselves well to individualised checks (think, for instance, of checks on entry to the United States) and, following the example of what was done in Hong Kong with the compulsory bracelet, it is conceivable that this information will eventually be associated with the passenger’s profile. Look, for example, at what Etihad announced to introduce.

4. Strengthening the role of hubs

The hubs will become even more important because passengers will have to be concentrated to ensure sufficient aircraft load factor. This metric will perhaps become the most important of all. Regional or smaller airports will see a decrease in traffic. In hubs, the reduction of direct traffic will lead to longer waits and higher concentrations of waiting passengers. Space arrangements will have to be made to separate and protect passengers from each other. The VIP lounges (Business Lounges) will be the first places to benefit from these facilities to preserve the customers who bring in the most money for the airlines. Specific boarding procedures will be developed further to separate this clientele from the rest of the passengers.

Low-cost airlines (Ryanair in the lead) could take advantage of this change to negotiate harder for their establishment in second-class airports and build the foundations for a future growth cycle. Remember that Ryanair is the leading European airline (152.4m passengers in 2019) and that the increase in its traffic is based on the constant opening of new destinations. The coronavirus crisis could, therefore, be an unprecedented opportunity for the Irish company (after a period of a sharp decline in its traffic, of course). Its low prices would continue to attract customers, and it is a safe bet that the overflowing imagination of its boss could lead to some innovations to guarantee the health safety of passengers on board. I will bet on the wearing of mandatory masks and the billing of these masks if you have forgotten them.  Ryanair stewards will offer new products: gloves, disinfectant gel, and various accessories to guarantee your safety at your destination. 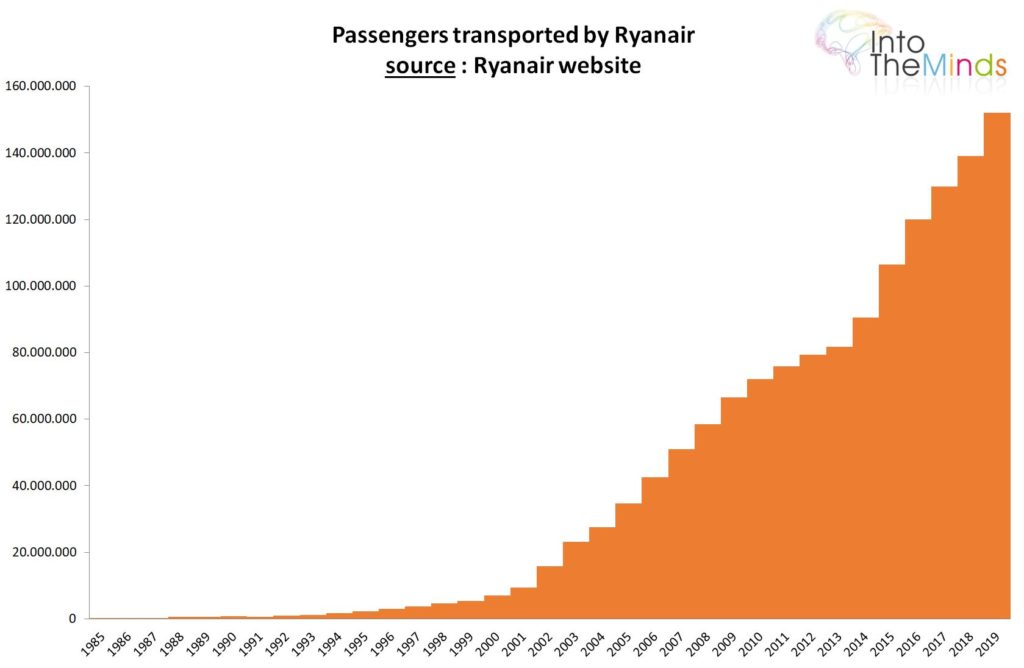 The latest statistics for the air sector correspond well to the projections we made in May 2020. The drop in the number of passengers transported in July reached 79.8%. The decline is even 91.9% for international flights.

These figures must be considered in light of the situation of low-cost airline companies. As we predicted in May 2020 (see section 5 above), the low-cost sector is the big winner of this crisis. Not that this sector has recovered from the situation, but it is suffering much less than the traditional airlines. As of 30/06/20, Wizz Air was already operating 70% of its network (compared to Air France at 20%). Ryanair carried 4.4m passengers (a fall of nearly 70% compared to 2019), but Lufthansa only had 1.2m at the same time. Even better, the Spanish company Veolia claimed an occupancy rate of 90% and a level of activity close to the summer of 2019.

The reason for this different dynamic between low-cost and traditional airlines is linked to 3 factors.

6. The end of giant planes

Like Lufthansa, which is removing six Airbus A380s from its fleet, giant aircraft will be used less and less. As airlines need more flexibility, they will opt above all for medium-capacity aircraft whose profitability is achieved with fewer passengers. Manufacturers such as Embraer and Bombardier could see their order books fill up faster than those of Airbus and Boeing. Beyond the problems of the 737Max, the two aerospace giants will see their production rates melt like snow, with rapid repercussions on the entire supplier ecosystem. In an extreme scenario, Brexit could provide an excellent excuse to eliminate any UK contribution to Airbus construction and bring production back to continental Europe. The consequences for Emirates, which has the largest fleet of A380s (123 aircraft on order), also need to be considered. Its boss, Tim Clark, may well regret having said that Emirates was the only company that knew how to use this giant aircraft. In any case, Emirates is looking for billions of dollars in loans to save itself.

The demand for improved travel conditions, without additional passengers, could boost business aviation. Lufthansa already offers such a service through NetJets, but may be tempted to invest in this niche and end its first-class offer.

Business aviation growth is estimated at 15-20% in 2020, boosted by the Covid-19 crisis. Health risks, coupled with the lack of safe alternatives, are pushing the wealthiest travellers to turn to private jet rentals. Our prediction of May 2020, during the COVID crisis, has therefore come true (see point 7 above).

An interesting example is given by the newspaper Les Echos in its edition of 12 September 2020. The company ASL, specialist in business trips in private jets, has thus increased its fleet by 8 planes, bringing it to 40 units. Its marketing manager declares :

We have doubled our fleet in the space of 5 years. But the craze has been accelerated by the current crisis.