LinkedIn: the sentiments expressed and their effect on virality

Home » big data » LinkedIn: the sentiments expressed and their effect on virality

Everyone agrees that the content of LinkedIn posts is a determining factor in the probability that they go viral. So today, I’m not going to answer the question “What should we talk about on LinkedIn?” but rather “How should we talk about it?” I used a corpus of 4 million LinkedIn posts to measure the sentiments expressed and analyze the correlation with their virality.

This analysis follows the one I published here on a set of 4.6 million posts and in which I had highlighted the role of the network, the word count, and the number of emojis in the virality of a LinkedIn post.

If you want to know more about LinkedIn and receive my exclusive analyses by email, you have to subscribe to my newsletter (below). Make sure you confirm the subscription link that you will receive by email!

Sentiment analysis, how does it work?

The advent of NLP (Natural Language Processing) has made a range of new tools available. In my favorite ETL software (Anatella), a module has recently been dedicated to sentiment analysis.

The sentiment analysis is based on 2 variables:

The polarity corresponds to an assessment of the emotions contained in the text. Again, it is measured on a scale of -1 to 1. Negative emotions are between -1 and 0; positive emotions between 0 and 1.

If you want to know more, I would advise this discussion on Quora.

As negative subjectivity corresponds to objectivity, I used this term. As the term “polarity” refers to emotions, I have chosen to use this term for a better understanding.

So, we find 4 “quadrants” that allow us to divide the LinkedIn posts according to their objectivity/subjectivity and positive/negative emotions. As you can see, there are significant differences between the different languages (feel free to click on the image to enlarge it). 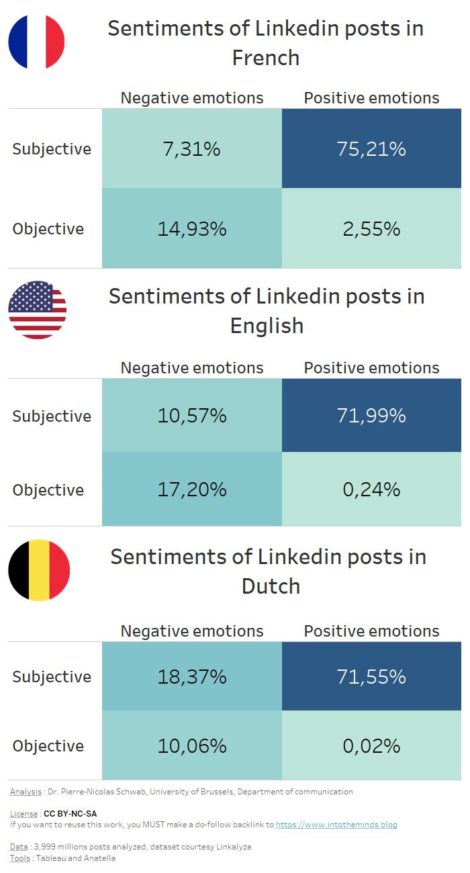 LinkedIn posts are almost always subjective… except in French

The graph below shows the sentiments expressed in the 99.79% of posts that received less than 1000 reactions.  You can see that the vast majority of them are in the upper part of the chart, i.e., in the “subjective” part. Only the posts in French are a slight exception to this rule.

The graph below visualizes the LinkedIn posts that generated more than 1000 reactions (likes + comments). Most of them are located, like the non-viral posts, in the upper right quarter (see dotted frame). They are therefore subjective posts whose emotions are positive. However, we note a significant number of posts in the upper left quadrant for the English language, i.e., posts whose expressed emotions are negative. The most viral post of the whole dataset is located there. 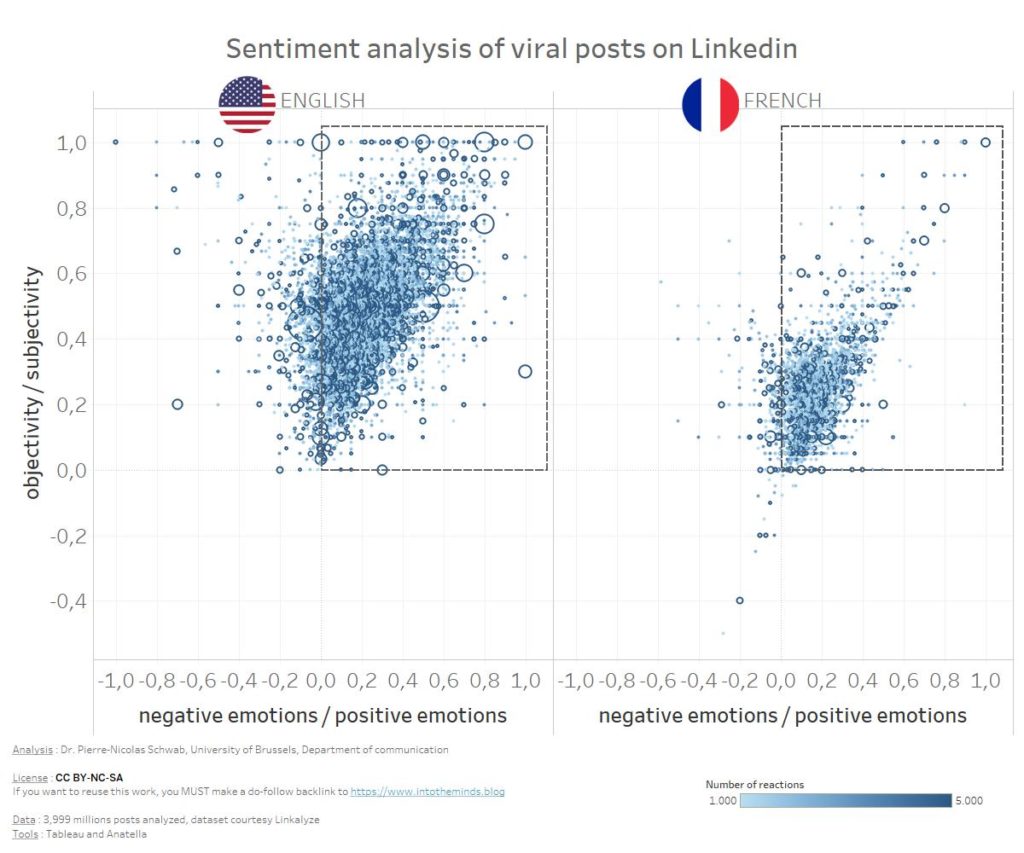 The most viral post in the dataset is the work of this person. It is classified as a slightly negative post in terms of emotions and average subjective. I’ll let you decide if the algorithm did a good job. As you can see, since the dataset was provided to me, this post has continued to receive likes and comments. The cumulative number of reactions is now 817355. 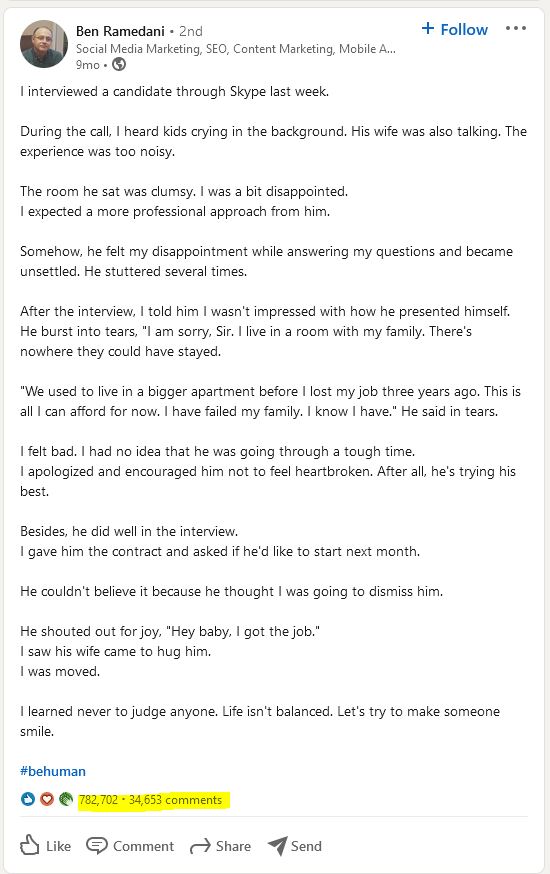 Subjectivity has the most significant influence on LinkedIn post virality

The final part of this analysis was to determine the effect the variables “subjectivity” and “polarity” had on the probability of a LinkedIn post going viral.

The prediction model was realized using “Modeler” from Timi. I followed the same methodology as in my previous research. I modeled the probability of getting 100 reactions to a LinkedIn post. The “reactions” are defined as the sum of likes and comments.

The “natural” probability of reaching 100 reactions is 3.59%. When the subjectivity of the post is about 0.5, this probability increases to 5.2%. 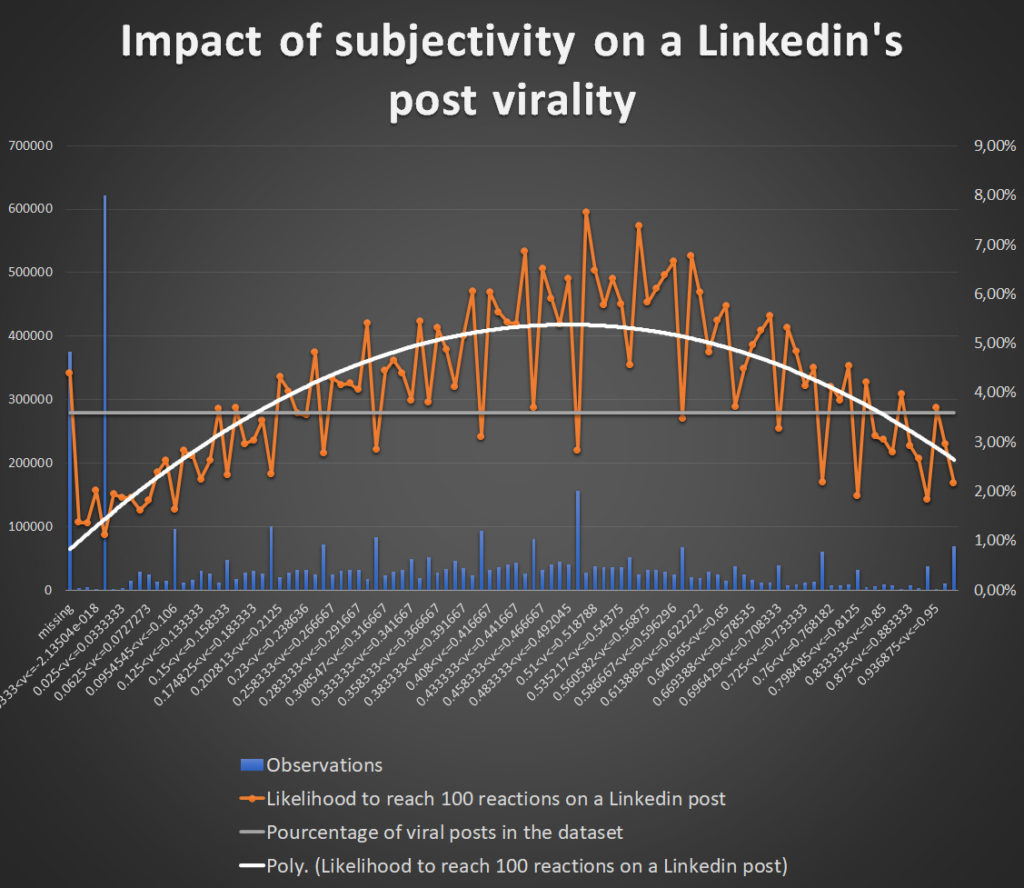 My thanks to Tableau Software for supporting my research.

Thanks to Frank Vanden Berghen and Timi for their help in making Anatella and Modeler available.