Which are the most popular hashtags on LinkedIn?

Home » Data & IT » Which are the most popular hashtags on LinkedIn?

Hashtags on LinkedIn are probably one of the most popular topics about this social network. So naturally, there are assumptions about how LinkedIn’s algorithm uses hashtags. However, I have shown statistically here that hashtags do not significantly impact the virality of posts. Anyway, the dataset I have at my disposal (4.6 million posts) provides an exciting overview of the most used hashtags globally and the differences that exist depending on the language.

This analysis is, therefore, fundamentally different from anything else you will find on the subject. Indeed, hashtag analyses on LinkedIn are only based on the number of followers and not on their actual use in posts.

Which are the most used hashtags on LinkedIn?

The visualization below gives you an overview of the hashtags used in all 4.6 million posts analyzed. This is interactive visualization. Please move your mouse over the different circles to see which hashtags are behind them and what proportion they use on LinkedIn.
If the visualization does not display correctly on your browser, I invite you to go to my Tableau profile to see it in native mode.

The 20 most used hashtags on LinkedIn

The previous visualization, although graphically attractive, does not immediately show which hashtags are the most used. So, I have prepared a ranking of the 20 most used hashtags on LinkedIn. And as you will realize, the hashtags used on LinkedIn have nothing to do with the ones that are followed (right part of the graph).

When we talk about hashtags on LinkedIn, we mainly refer to the hashtags that are followed on this social network. This information is indeed easily accessible. However, calculating the actual usage rate of hashtags is an entirely different exercise that, to my knowledge, has never been realized using hashtags. 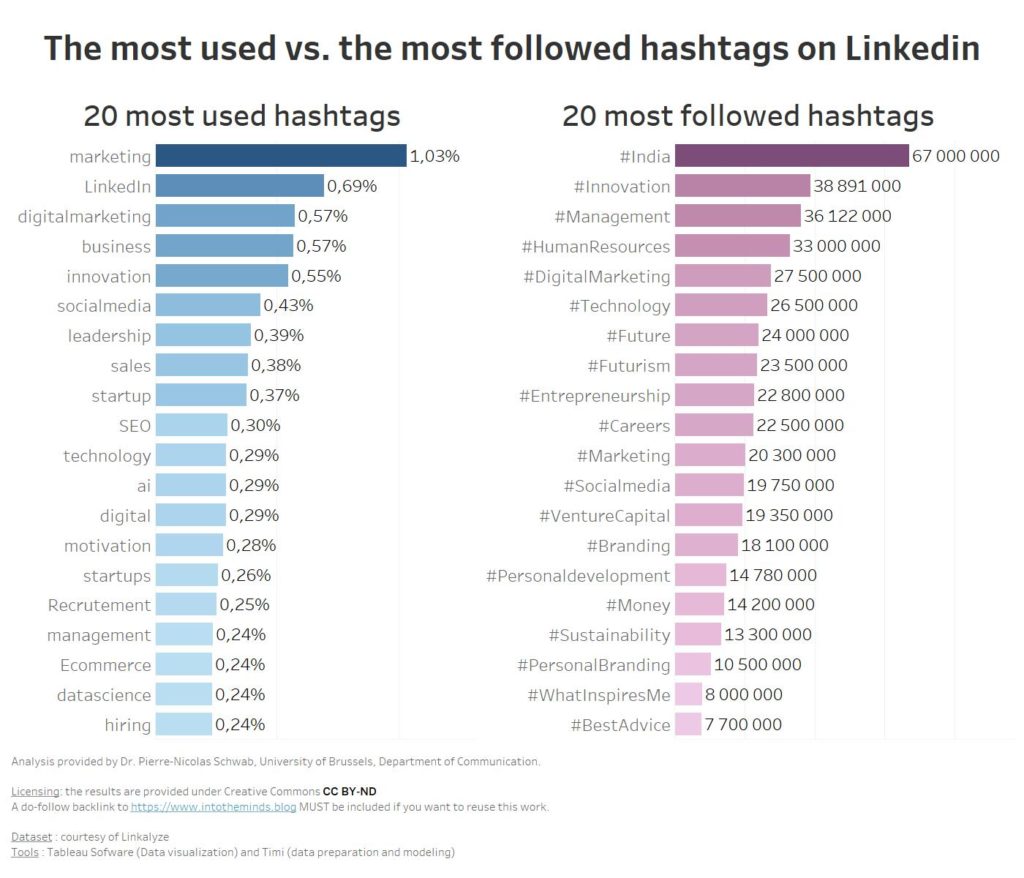 Despite the 4.6 million LinkedIn posts in the dataset, a bias necessarily exists since some countries are more represented than others. India is the first country represented in number of hashtags, followed by France (where the application that gave us access to the dataset is mainly used) and the United States. This probably explains why the French-speaking hashtag “recruitment” is in the top 20 most used hashtags.
Nevertheless, the differences remain apparent, and only the following 5 hashtags are in both TOP 20:

Notable differences in the hashtags used depending on the language

To understand what differences existed in using hashtags depending on the language, I enriched my dataset by detecting the language. The data preparation was realized using Anatella (an ETL solution), which proposes a pre-programmed functionality based on the CLD2 algorithm.

I focused on languages for which I had a sufficiently large corpus.

The percentage indicated to the right of the hashtag corresponds to LinkedIn posts using this hashtag for the stated language. For example, the hashtag #marketing is used in 1.15% of posts in English. However, in Italian, the percentage rises to 2.48%, and in Spanish, it is only 0.82%. 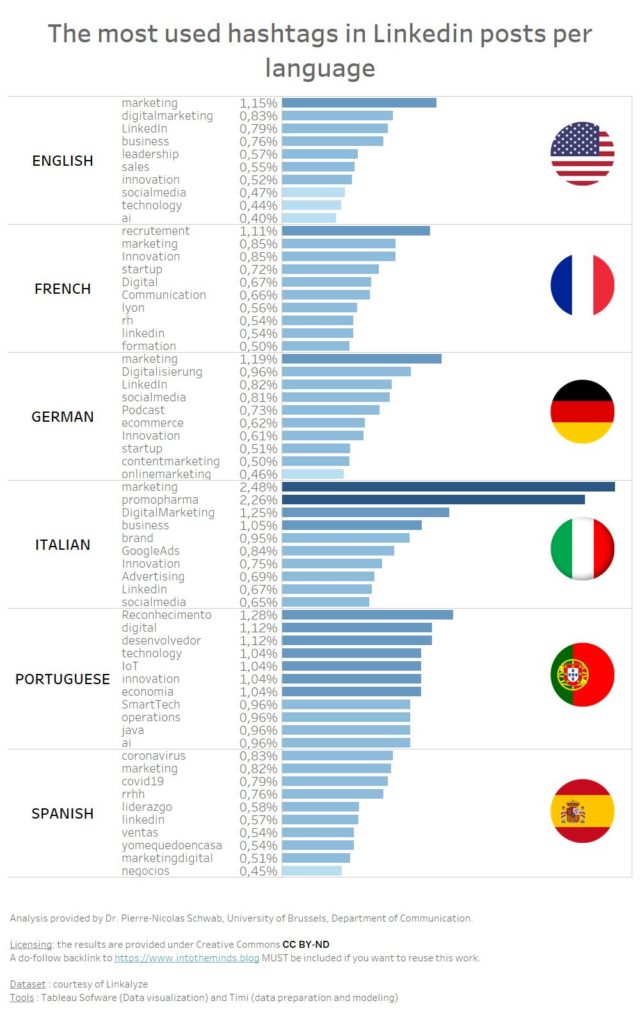 As you can imagine, processing 4.6 million LinkedIn posts is no easy task, especially when they contain multiple hashtags.

It would have been impossible to prepare this data using Tableau Prep. So, I turned to Anatella, whose speed is well known (see here my last benchmark). Hashtags are easily identifiable, thanks to the #. So, the operation consisted of extracting all the strings beginning with #, then making a pivot (functionality “unflatten”).

If you have any other questions about LinkedIn, feel free to challenge me by leaving a comment. I’ll be happy to accept the challenge.