LinkedIn: the surprising effect of emojis on the virality of posts

Home » LinkedIn: the surprising effect of emojis on the virality of posts

Should you put emojis in your LinkedIn posts, and if so, how many? In today’s article, I reveal the results of research I conducted on 4.599 million LinkedIn posts. This research follows the ones I’ve already published on the impact of hashtags and the word count.

If you want to be the first to receive my results, subscribe to my newsletter (don’t forget to click on the confirmation link sent to you by email).

The descriptive analysis of the dataset shows that 80.12% of the messages on LinkedIn do not contain emojis. This is a good illustration of Pareto’s law.

The prediction model performed with Timi Modeler shows that the average probability of getting 100 likes on a LinkedIn post is 3.5987%. I calculated this probability by limiting the observations to authors with a maximum of 25000 likes (i.e., 99% of the dataset). I wanted to eliminate the outliers (too many reactions) due to large networks characteristic of famous people (Barack Obama, Bill Gates, …). You will find in the table at the bottom of this article all the results.

I have taken the results using Tableau and eliminated the outlier related to the post containing 1190 emojis.

I also included (in orange below) the percentage of posts according to the number of emojis contained.

A polynomial function gives a perfect “fit” (R²=0.96, see blue dotted line), and we see that an asymptote is reached around 18 emojis. So, there is no need to include many more.

A polynomial function gives a perfect “fit” (R²=0.96, see blue dotted line), and we see that an asymptote is reached around 18 emojis. So, there is no need to include many more.

Here are the essential lessons I learned from this analysis:

As for the other analyses I published, the question of causality remains essential. At this stage, it is impossible to say what causes the reactions. Does LinkedIn’s algorithm “push” more publications that contain emojis, or is the human eye more attracted to publications that have them? A lot of work is still needed to solve this mystery and maybe even some research on eye tracking.

To realize this research, I used a dataset of 4,599 million LinkedIn posts provided by Linkalyze. I prepared the data with Anatella, and the modeling was realized using Modeller (these 2 solutions being supplied by Timi).

The data preparation part mainly consisted of the reconciliation of 2 databases in JSON format (see diagram below):

As the emojis are not directly readable, a regular expression has been used to extract and count them. For those who want to reuse it, here it is:

It was then necessary to manually eliminate other signs that were also extracted but were not emojis.

The modeling consisted of predicting the probability of reaching 100 reactions with a LinkedIn post (Likes + comments). To do this, I created a “ManyReactions” variable that identifies posts that have reached the symbolic 100 reactions mark. 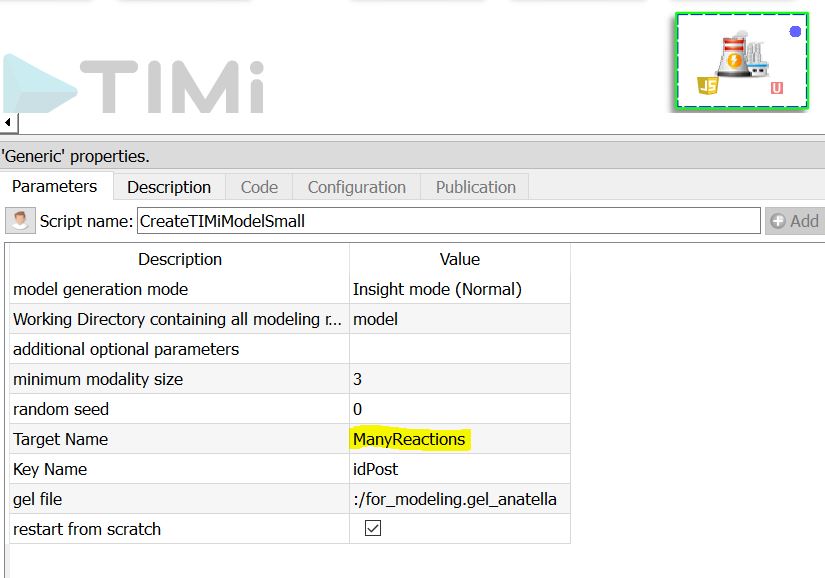 Thanks to Frank Vanden Berghen for his help in programming the emoji extraction feature.