In November 2018, the Ravenstein Gallery, near Brussels Central Station, saw the emergence of the new retail concept of Delhaize, the Belgian mass retail company belonging to the Ahold group, called “Fresh Atelier”. The city of Louvain (Leuven) has also hosted a Fresh Atelier in the Diestsestraat since December 2018. This new store concept aims to refocus on consumers’ expectations, both in terms of their consumption habits and lifestyles, while providing them with a unique experience.

In this article, we return with Karima Ghozzi, communication manager and Delhaize spokesperson, to the creation of the Fresh Atelier Delhaize, consumers’ expectations and the future of this innovative concept. A scoop will be revealed on this subject in this article. 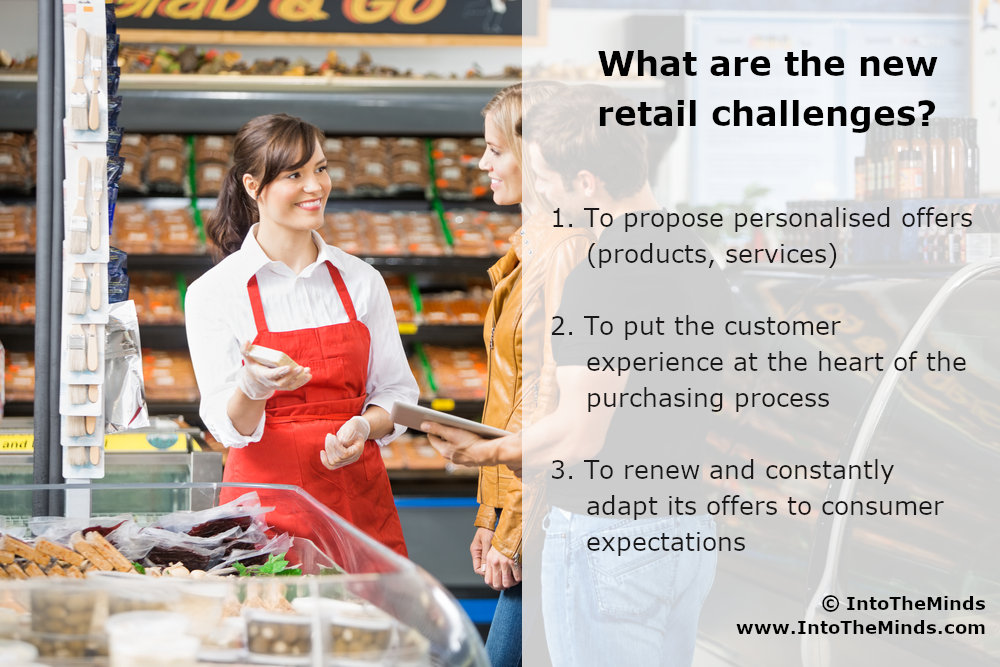 Retail Outlets: What Are Consumers’ Expectations?

While more and more consumers are saying that advertising has less and less influence on them and their shopping behaviour, it is more crucial than ever to anticipate customer expectations, especially at the level of “physical” points of sale.

A study by the Obsoco (the Society and Consumption Observatory) thus details the challenges of tomorrow for retailers. In the digital age, even food retailers must modernise and put the customer experience at the heart of their objectives if they want to continue.

They must also be in tune with changing lifestyles. More than 50% of the people questioned in an online survey conducted by L’ObSoCo / CNCC, Clear Channel, CBRE in 2018 still say they use commercial outlets. However, 32% of those questioned also said they had significantly reduced their use of retail outlets for budgetary reasons. 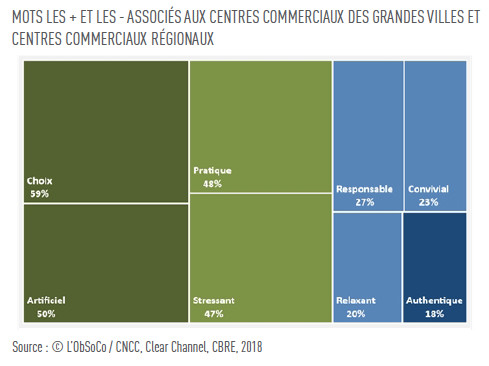 These people would like to have a relaxing experience while not wasting time shopping. This includes the comfort of purchasing – brightness and space in stores in particular – but also payment methods adapted to their expectations and the proximity of the brands. If the study points out that 33% of people interviewed say they appreciate local shops, one can wonder about the opinion of the remaining 67%.

One thing is certain. Never before have retailers operated in such a dynamic environment and been subjected to so much pressure for innovation. To better understand retail trends, do not hesitate to consult the article we have devoted to this subject.

Read also
Market research: the 5 trends that will shape the future of retailing

With its experience as a leader on the Belgian distribution market, Delhaize has embarked on a new adventure at the end of 2018. With Fresh Atelier, Delhaize incorporates into its ecosystem the smallest surface area that a distributor has ever created. Indeed, the maximum area of the new concept being 100 m2, this distribution area is, therefore, the smallest of the Delhaize brand – smaller than Proxy, AD, of course than Super and even smaller than Shop&Go. 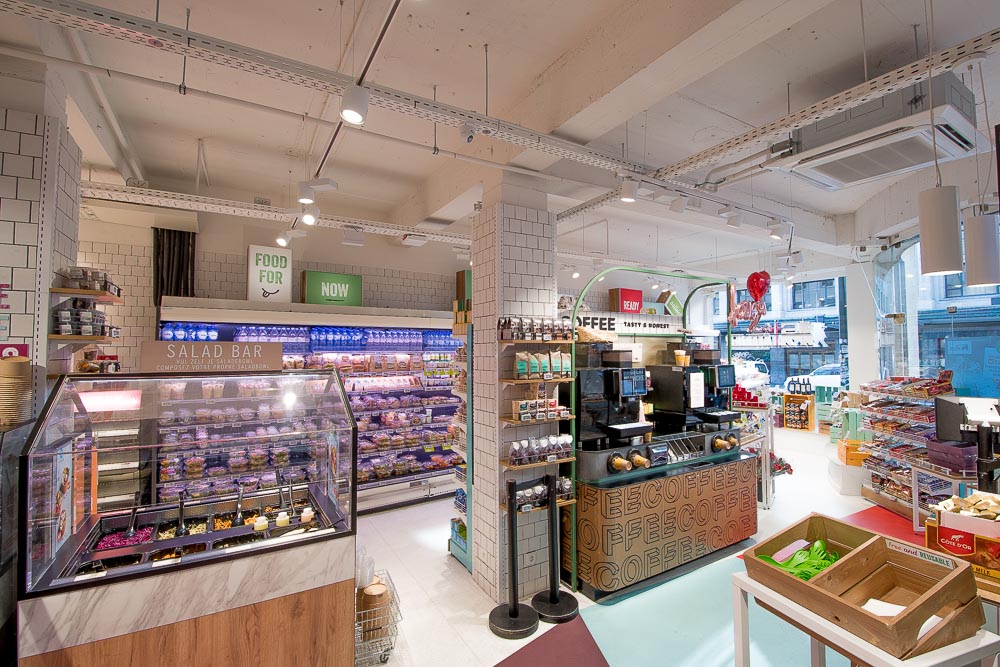 Fresh Atelier Delhaize is known for its desire to offer consumers a small and compact space in which they can find something to eat a healthy meal, a snack, or even have their weekly shopping delivered.

The effect is quite singular when you enter this concept store. The place seems narrow and yet there is a sushi bar for lovers of Japanese culture, a smoothie bar for great fruit lovers, homemade and balanced meals and a space dedicated to coffee fans. 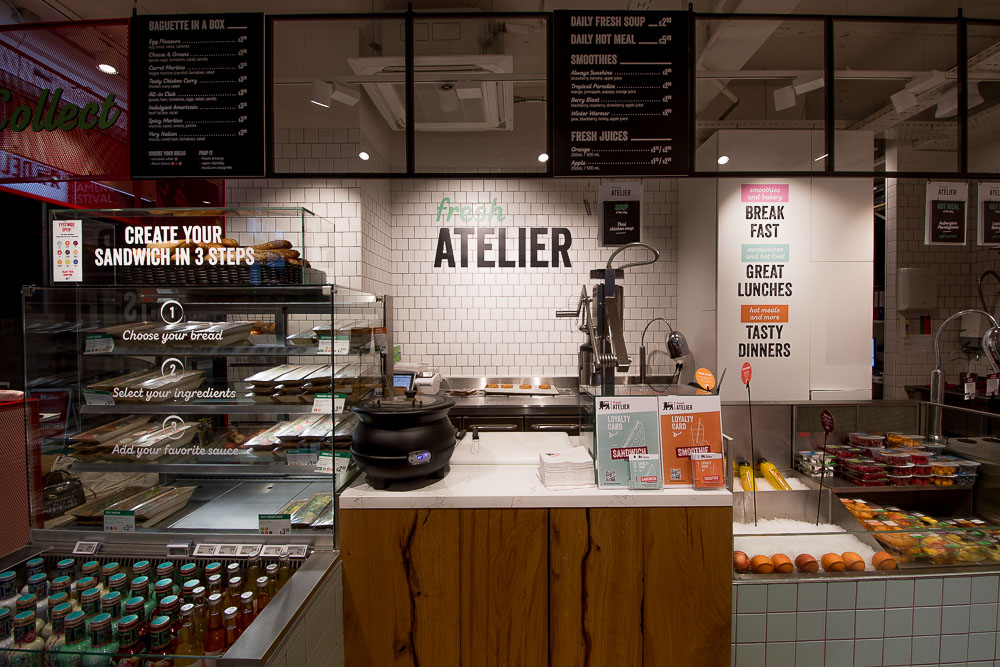 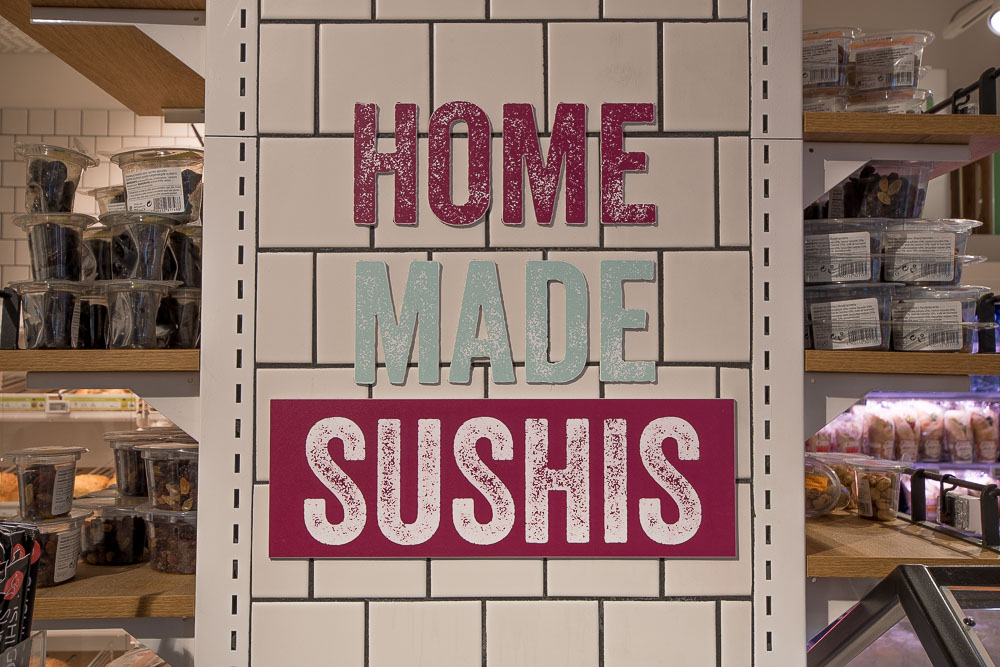 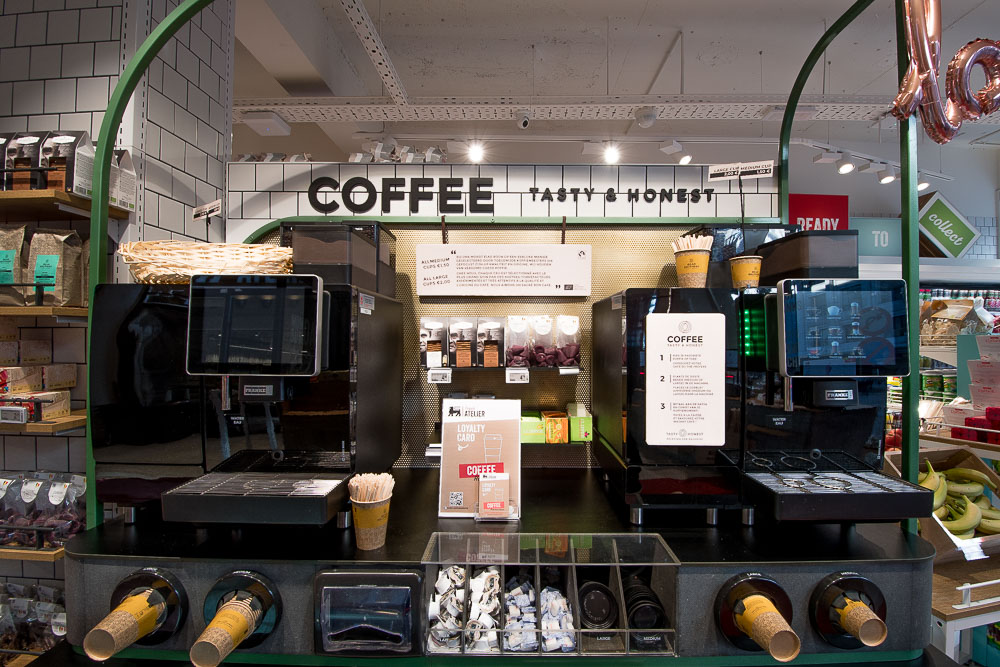 So what are Delhaize’s underlying incentives behind the creation of this new retail concept? “The need becomes the idea,” says Karima Ghozzi, the brand’s spokesperson.
From January 2018, Delhaize organised focus groups where each consumer could ask questions, propose challenges and explain the problems they could encounter when shopping. An online platform and questionnaire were created, and group interviews were held.

To be remembered for your market research

The approval of the “Delhaize Fresh Atelier” concept began with an exploration of customer needs through round tables, another word for focus groups.

The results of their study revealed the need for today’s consumers to have a local store that offers something for their convenience, but also exceeds this need when necessary. Consumers also want to spend less time in stores. Thus, the Fresh Atelier Delhaize is equipped with automatic cash registers. But the company does not stop there. While it already offers detailed descriptions of each product on its mobile application, the company will offer Fresh Atelier customers the opportunity to pay for their items directly via their Delhaize application, starting in March 2019. 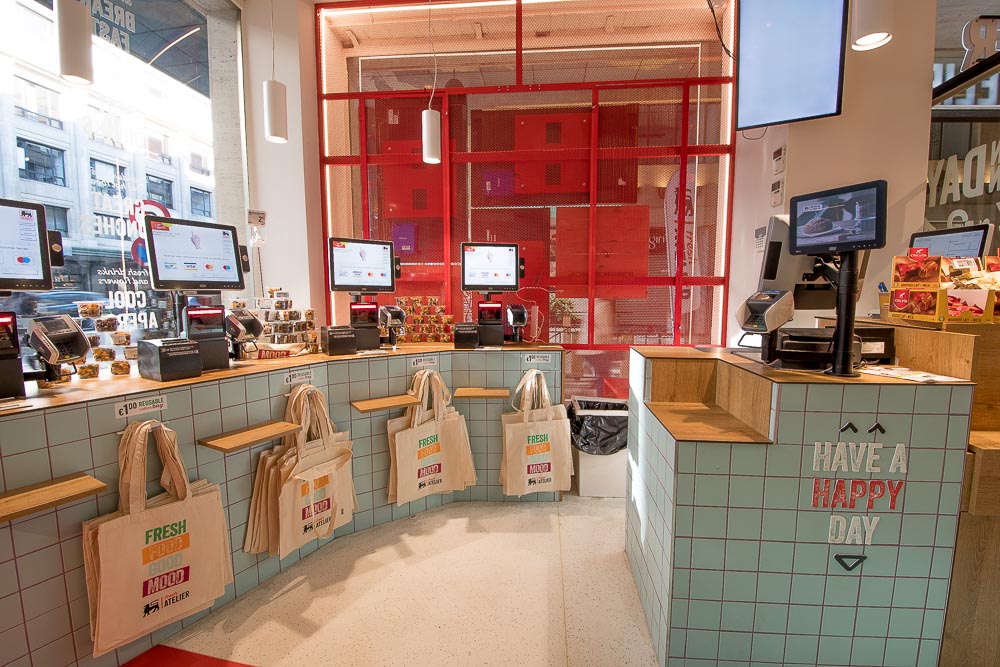 The only drawback is that the space in the city centre is minimal. It is with the aim of optimising this small space that Delhaize suggests to its customers to do their shopping online, pay for them directly on the site and pick up their items in the Fresh Atelier near their home.

With this new brand, the company is proving that it is moving forward and sticking as closely as possible to the needs of its customers. 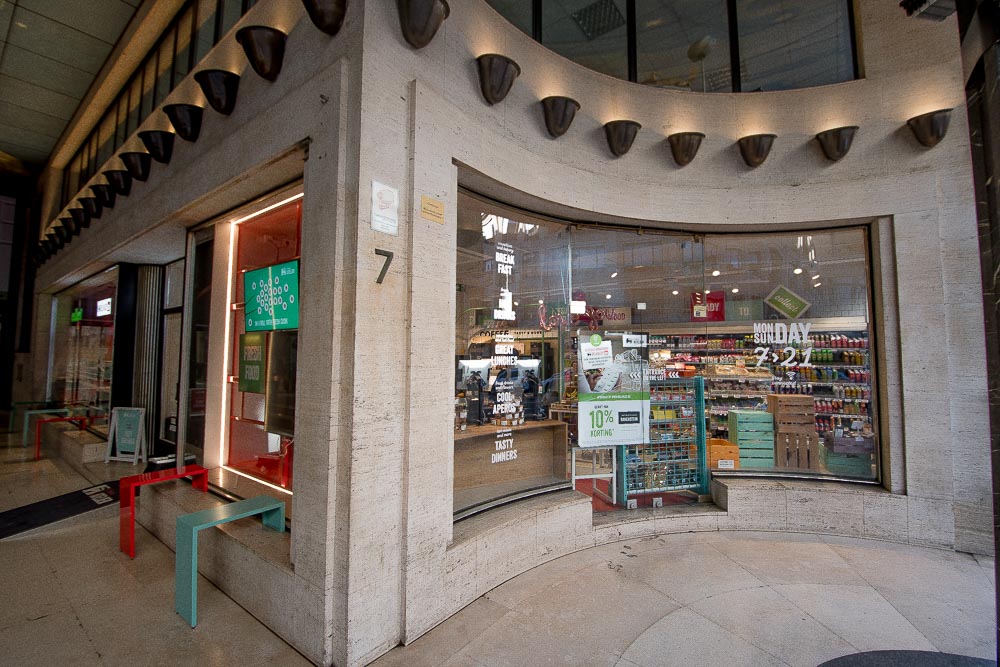 The purpose of the installation of its two Fresh Ateliers at the end of 2018 in the centre of Brussels and Leuven is also to test them as a pilot store, to ensure the success of this new format and to be able to make the necessary adjustments for future projects. Indeed, the advantage of these small structures also lies in their flexibility and the possibility of adapting them to the surrounding environment. It is easy to imagine that the sushi bar will transform into a pasta bar from one day to the next, to remain faithful to consumers’ expectations.

While remaining realistic in terms of conservation methods and prices, Delhaize is in line with this new concept and the evolving lifestyle of consumers.

The expectations and experience of consumers is at the heart of the Fresh Atelier’s thinking and creation with more dietetic, homemade, healthy and organic preparations. The brand thus offers its consumers not only to buy the products on site, mainly for a meal or snack, but also to pick up their shopping basket which can reach up to 200 euros.

Everything is ready to eat, from prepared dishes to easily assembled items – bread, ham, cheese and freshly cut fruit for dessert. 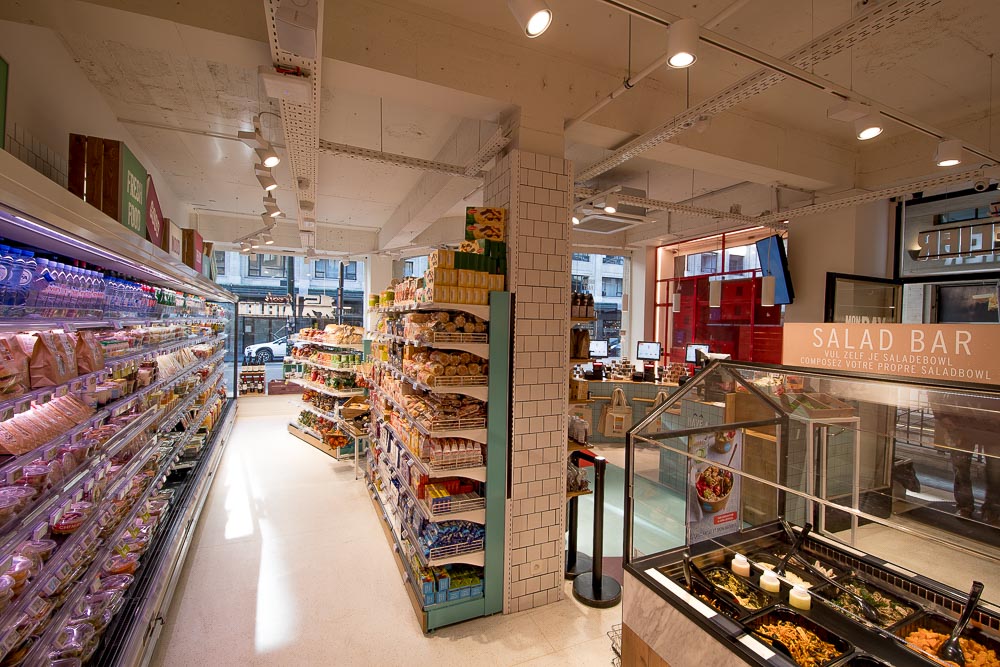 Indeed, distributors are nowadays life partners, since everyone regularly goes there to do their shopping. Karima Ghozzi confirms that this desire to be an attentive and caring partner is one of the goals of Delhaize.

We are partners with them [the consumers]. From a life partner, we expect support and guidance.

This is what Delhaize has proven to have as its objective in the past with the creation of an urban vegetable garden on the roof of Delhaize Boondael in Ixelles. This initiative has undoubtedly made it possible to revitalise the district, but also and above all to offer customers products with an extremely short circuit, which consumers are increasingly appreciating.

In a similar perspective, the brand offers dishes prepared for Christmas, combinations of original flavours while keeping a traditional side that consumers like to find on their plates for the holidays. A marketing campaign on fruit and vegetables with names that appeal to children, more and more organic, vegetarian and vegan products in all departments, while keeping an average of 70% Belgian products, Delhaize seeks to be in perpetual harmony with its customers and their way of life. 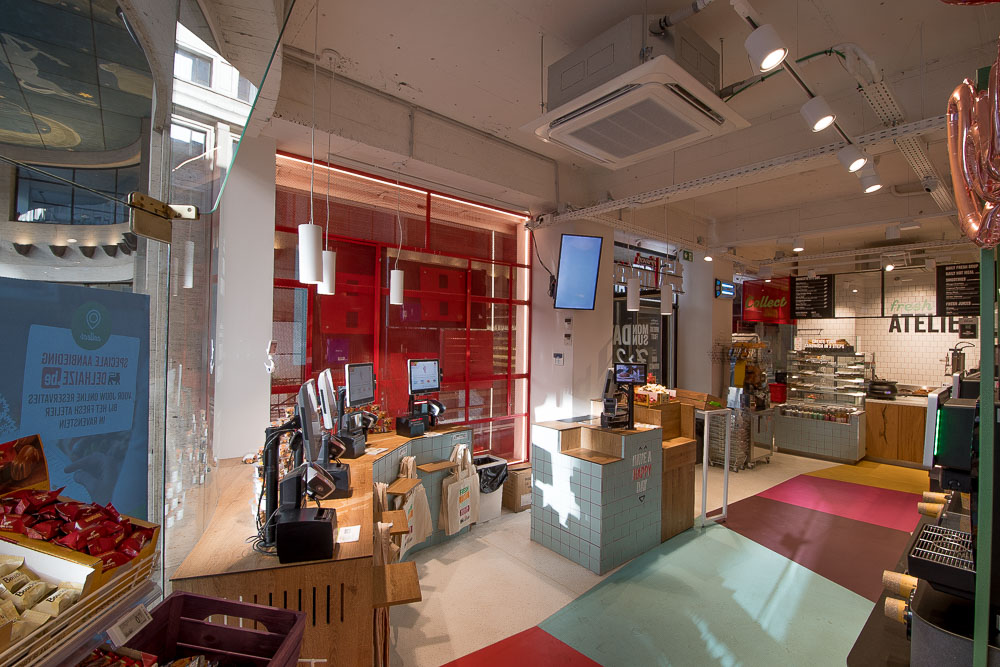 The brand, which already offers paper bags rather than plastic bags in the fruit and vegetable section in all of its stores, has banned plastic bags in the Fresh Atelier and offers cotton bags that are more environmentally friendly, in line with consumer values and therefore with those of Delhaize. And it doesn’t stop there since a payment system via the mobile application will be available in early March 2019, allowing consumers to make their purchases much more quickly and easily, but also giving the brand the opportunity to reduce its paper and ticket emissions significantly.

In the Fresh Atelier Delhaize, there are 75% of mini-ready preparations. 25% represents the assortment.

Currently, there are two Fresh Atelier Delhaize, one in Brussels, one in Leuven.

Building on the initial successes of this new concept, Delhaize plans to open four (4) more Fresh Atelier Delhaize this year, two in Brussels and two in Antwerp.