What are the habits related to money withdrawals in Europe?

Home » Misc. » What are the habits related to money withdrawals in Europe?

Withdrawals of money from ATMs are, for many Europeans, the most efficient way to obtain cash. Recent events with the Bpost Bank in Belgium prove that consumers are very attached to their money habits.

This article aims to understand the differences in money withdrawals across Europe and continues the report that we have written on payment methods in the countries of the European Union. 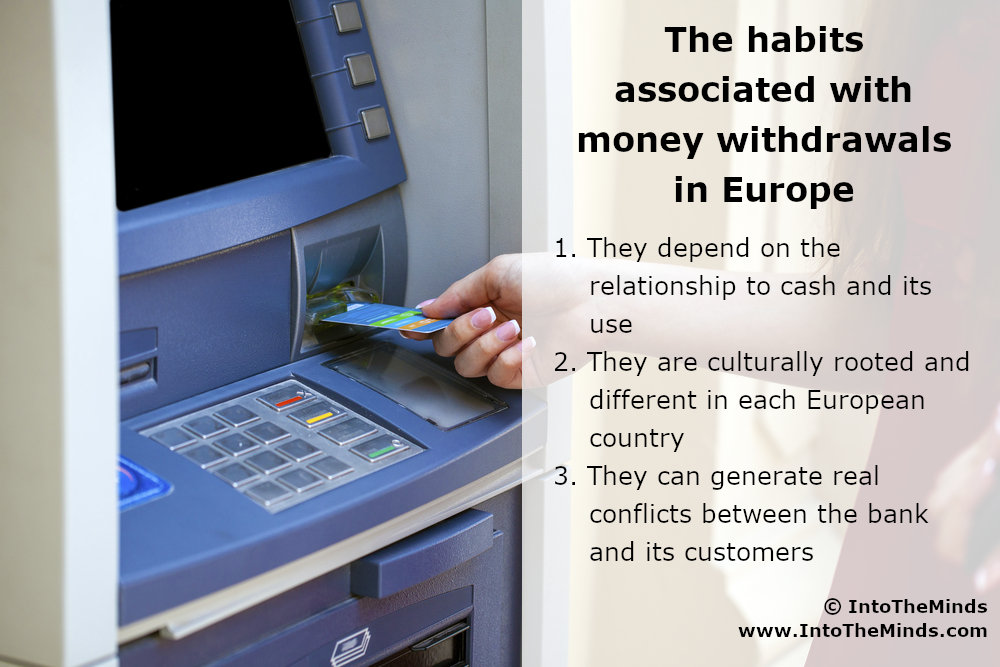 The Connection to Cash

First of all, we must agree that not all Europeans have the same connection to cash. Indeed, the social habits and cultural differences present in Europe give rise to very different behaviour and relationships to cash from one country to another.

A more detailed study on this subject is offered in an article describing the habits of different European cultures and their connection to the various means of payment.

This connection can be calculated directly by looking at the European wallets, by looking at the average amount of cash available to them. Of course, there are significant differences by age group and by educational level. However, the focus here will be on the national average.
The difference between the average amount of cash available to Germans and the French in their wallets is significant, 103 euros for Germans compared to 32 euros for the French, mainly because Germans carry out about 80% of their transactions in cash, almost twice as much as their Dutch, Belgian and French neighbours. 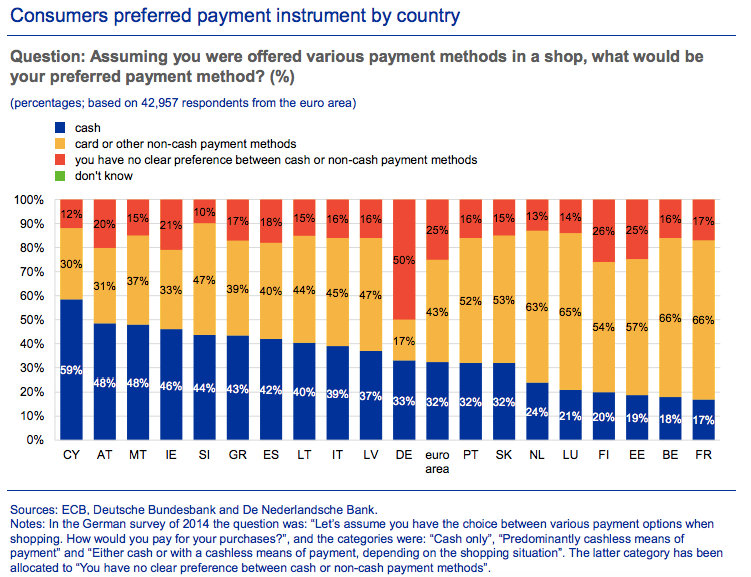 While more and more institutions and companies accept payments by credit card – often exceeding a certain amount – or by bank transfer, Germans remain firmly attached to their habit of paying in cash. However, they are not the only ones who prefer this option. In Cyprus, Austria, Ireland and Spain, the respondents to the study conducted by the European Central Bank (ECB) at the end of 2017, say they prefer to make their purchases in cash if they have the choice. On the other hand, around 60% of French, Belgian, Finnish and Dutch respondents prefer to pay for their purchases by card or other means of payment, except for payment in cash. The latter seems to reserve cash expenditure for occasional purchases, unlike Greeks and Cypriots, who are the most likely to state that they pay their electricity, gas, insurance and tax bills in cash.

The Conditions for Cash Withdrawals from ATMs

Withdrawals of money from an automated teller machine (ATM) remain, in all European countries combined, the best and most widely used means of obtaining cash. There is always the possibility of having cash reserves at home or having a cash refund after returning an item to a shop, for example. These options, however, remain in the minority.

On average, Europeans withdraw money from an ATM two to three times a month for an average amount of around 50 euros.

The majority of European residents are exempt from withdrawal fees when they decide to withdraw money from ATMs of the bank that issued their card. However, depending on the subscription plan taken out with their bank, withdrawals from other banking institutions may be subject to additional fees, in most cases over a certain number of withdrawals. The same system applies to withdrawals made in another country. 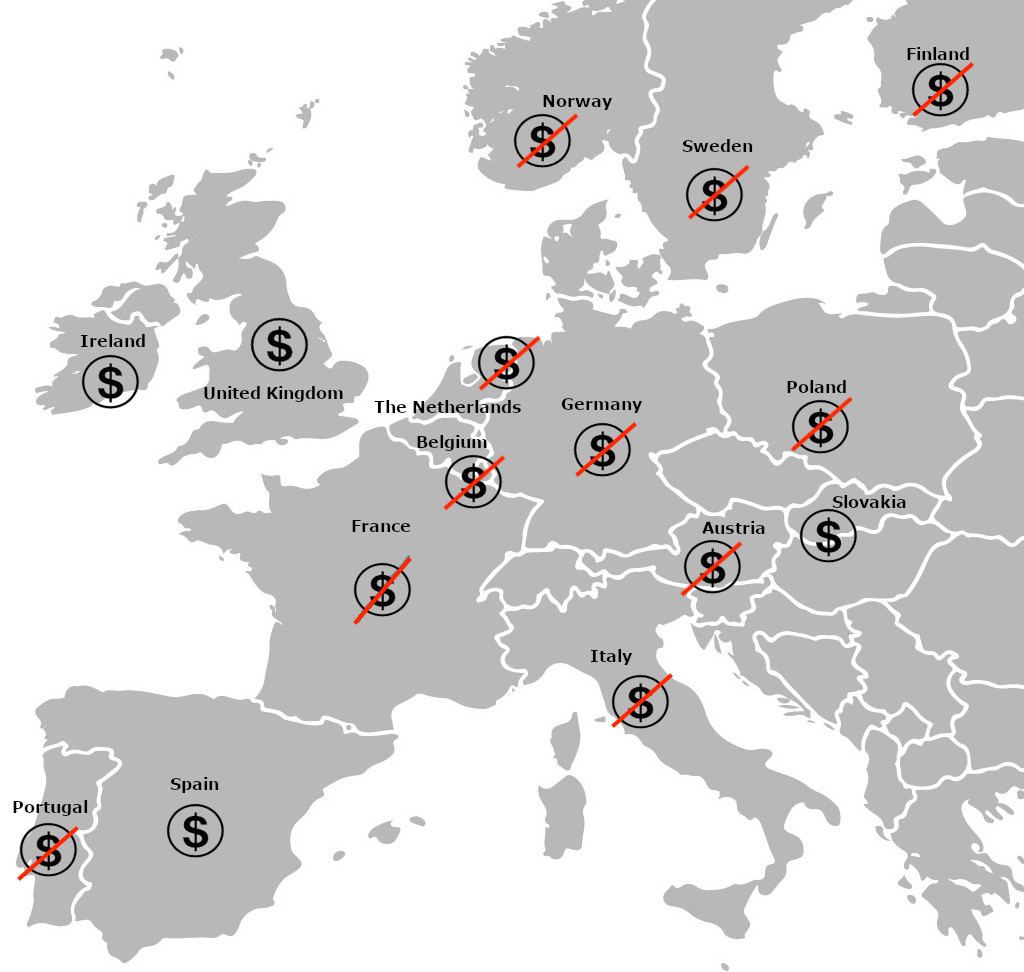 When a withdrawal is made with a card from Bank A in Bank B’s ATM, Bank B invoices Bank A for the transaction as a service rendered.

The most taxed when it comes to withdrawing money from an ATM are the Irish and Slovaks. Ireland has the highest number of people who claimed to pay fees for all their money withdrawals. Indeed, the Irish government charges a fee of 12 cents per withdrawal. However, these costs remain limited to €2.50 per year for DAB users only and €5 per year for DAB and point-of-sale users. It is the Irish who claim the most cash refunds if they have items to return to the store.

In Slovakia, most citizens have one authorised withdrawal quota per month. This limit should not be exceeded if users do not want to incur costs when withdrawing money. It also happens that, according to the formula subscribed with their bank, customers have to pay for all their withdrawals.
Spain and the Bank of Spain have the most variations in charges for withdrawals from ATMs, with an amount of up to €1 per withdrawal, close to the UK where ATMs can charge users amounts ranging from 1 to 10 pounds for withdrawals at points of sale.

For the other countries listed on the map, withdrawal charges may be charged to users who withdraw money from ATMs outside their banking network. In Germany and Austria, these costs average around €1.95. The same principle applies in Poland, where the related fees range from 1.2 to 1.3 zloty.
In Sweden, users are mainly billed by the month or year for their withdrawal, so it is part of their contract, while in Finland, the ‘Otto’ network – the largest Finnish banking network – offers its customers many opportunities to withdraw money free of charge.

Whatever the option that is chosen by European citizens from their bank, there is a strong chance that, in one way or another, they will have to pay fees when withdrawing from a distributor, especially if the latter is not part of their bank’s network. However, a small reminder or quick memo allows many Europeans to avoid this type of cost – except in Ireland where the charges of ATMs are recurrent. It will, therefore, be sufficient to know the number of withdrawals authorised per month to avoid any additional charges on your bank account.

The degree of satisfaction

The habits associated with withdrawing money are rooted in culture, in the relationship to money and to cash. Thus, the vast majority of Europeans questioned on this subject say they are satisfied with the services offered by their bank regarding cash withdrawals from ATMs, whether in terms of accessibility to ATMs or fees related to cash withdrawals.

Only the most constrained, and to an uneven degree depending on the banks and the types of contracts – as in Slovakia – seem more critical of their country’s banking system. In Ireland, where everyone is on the same page and has to pay withdrawal fees repeatedly, the customer satisfaction ratio remains high. This can be explained by the fact that this practice is part of Irish customs, and therefore part of the Irish culture.
We have seen this in Belgium with the scandal created by Bpost at the beginning of 2019, trying to drastically change the cultural habits – here linked to money withdrawals – of a group can be dramatic.

Indeed, in areas where, for many years, there have been no or very few fees related to withdrawing money from ATMs, it can be catastrophic for a bank to change its positioning where its competitors remain in their positions. In Belgium, the ING bank had already tried to charge for withdrawals for some contracts, which caused anger among the customers concerned. Indeed, withdrawing money is not a successful action for banks, which also explains why some banks impose minimum withdrawal amounts. However, it is clear that Europeans are committed to the system they know and considers, for the most part, that withdrawing their money from ATMs is and should remain a free service offered by the bank to which they entrust their money.