market research : how do Europeans pay ?

My mother-in-law is Italian. She hardly make two payments a year with her credit card. On my way to the University of Mainz a few weeks ago, I met a 64-year old taxi driver of Turkish origin who prouded himself not to have any bank card. I find it fascinating to observe how consumers’ behaviors can vary and have always been fascinated by how cultural aspects affected the way people paid in he European Union. I had the impression that the souther I went in Europe, the more people paid with cash. A market research by the European Central Bank finally sheds light on those differences and shows how consumers behave from one country to the other, from one sociodemographic group to the other.
In today’s post we discuss some of the results of this very interesting market research.

Large discrepancies between countries of the European Union

my gut feeling that people in southern countries love cash more than people living in northern countries is, by and large, pretty true.
The report reads :

But honestly, I’d never have imagined that The Netherlands were the pioneers in non-cash payment. Also interesting to me are the differences existing between the three Baltic countries : Latvia, Lithuania, Estonia. While Estonia is far ahead in terms of digitization of payment, Latvia and Lithuania exhibit patterns that are typical of southern countries like Spain, Greece or Italy.
Also surprising to me is the resistance of Germans to card payments (which is reflected in the 80% share of cash transactions vs. only 45% in The Netherlands and less than 65% in Belgium and Luxembourg. 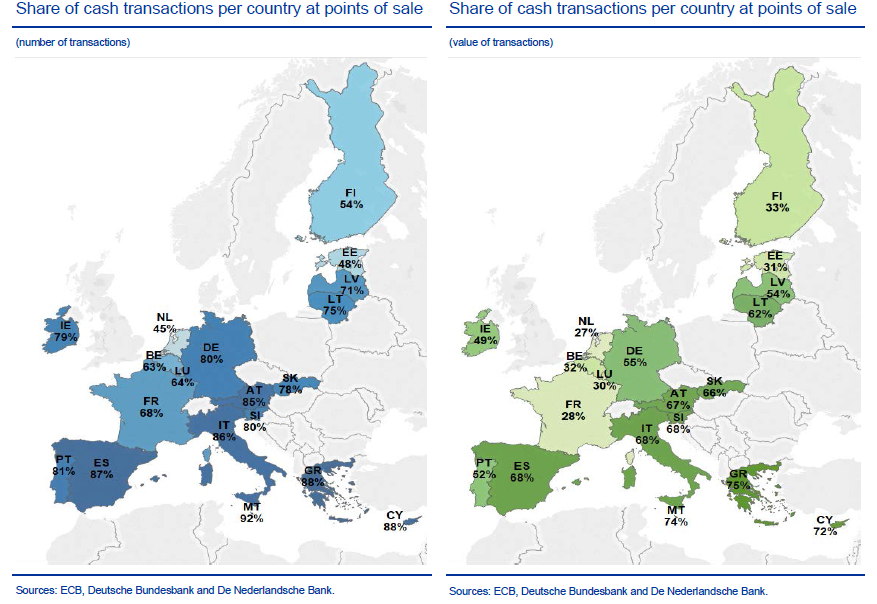 Next to country-specific differences we also note that discrepancies exist between socio-demographic groups. The report reads

“the survey results show that consumer characteristics, such as gender, age and level of education, appear to influence the choice for a particular payment instrument”.

By and large here are three main conclusions :

Subtle differences exist of course, like for the 18-24 segment which has the lowest number of card payments of the whole population. Nothing strange though as most 18-24 are still studying and less likely to own a card.

In terms of card acceptance, the EU average is at 72%. All countries below that average are southern countries (Portugal, Spain, Italy, Malta and Greece) with the notable exceptions of Slovakia and … Germany.