PicRights is a company discussed on the Internet as a copyright troll acting on behalf of AFP (Agence France Presse). In this article, I tell you my experience with PicRights and gives you all the advice you need to avoid falling into their traps. I also make a revelation about the headquarters of PicRights in Switzerland.

PicRights is a “copyright troll” acting in particular on behalf of AFP. If you have received one of their emails, please follow these 3 steps:

It all starts with discovering an email from PicRights in my spam box on a Friday night. My weekend will be a disaster. It’s only several weeks later that I will realize I fell into the trap and now count among copyright trolling victims. PicRights has hung me on its hunting board.

To prevent you from making the same mistakes I made, I did a lot of research and interviewed an expert in the field: Mr. Jerome Tassi.

What is copyright trolling?

Companies, often opaque, use robots to scan websites and discover unauthorized uses of images they believe copyright law applies. Psychological pressure is then exerted to obtain the payment of financial compensation out of proportion to a regular user license price. In this article, we talk about the case of PicRights, a well-known troll copyright, but others also exist.

PicRights: how the nightmare of copyright trolling began

So, it all started on a Friday evening with the discovery of an email in my spam box. This email was titled “Image License Validation for Agence France-Presse,” and its content looked like a scam.

In this email, an obscure Swiss company, PicRights, supposedly acting on behalf of the AFP (Agence France Presse), threatened me with prosecution for using a photo subject, according to them, to copyright law.

I reproduce below an excerpt from the email I received. I specify at the outset that this is done as a citation, following Article 10.1 of the Berne Convention. 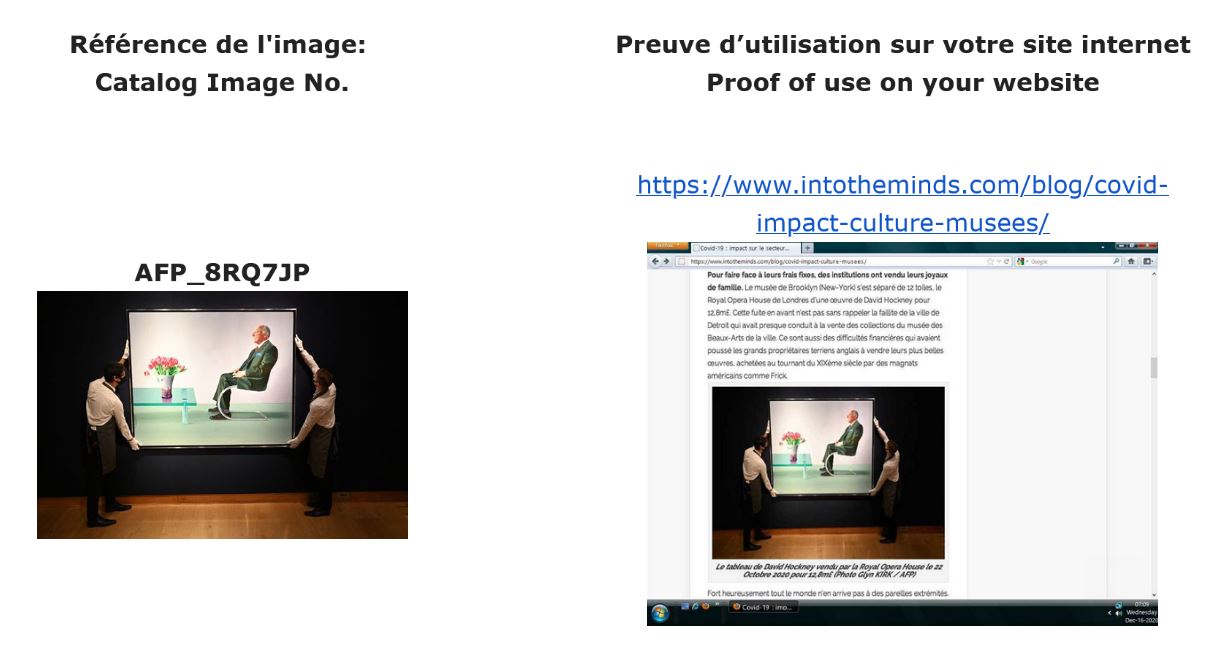 Extract from the email received from PicRights that contains a screenshot of poor quality. As explained by Mr. Jérôme Tassi, screenshots made by troll copyrights are often refused by the courts. They do not constitute legal evidence since only a bailiff can make this kind of statement.

The email seemed to be a little too well written to be a simple scam like the ones we used to find in our spam. So, I did some research directly on the Internet and what I found there horrified me.

PicRights has its headquarters above a pizzeria

A simple search with the terms “AFP PicRights” returns nearly 1200 results on Google. The first pages are full of horror stories of people calling for help after being threatened by PicRights. The forums are also full of testimonials from frightened people. Reading them convinced me that what I had to do was not a simple “scam.” It was about copyrights trolling by an existing company.

PicRights GmbH is located at Albisstrasse 16 in Adliswil, Switzerland. A look at Google Map shows that it is a village house. At this same address, there is also an Italian restaurant. Image: copyrights Google Maps, Maxar Technologies, OLIG

A quick look at Google Maps tells us more about this famous company, PicRights. It is located at 16 Albisstrasse in Adliswil, a small town of 16,000 souls in Zurich’s Canton. All activities take place from a small village house (see picture above). More surprisingly, at this same address, one can also find an Italian restaurant, the Piccolino. How could a company as omnipresent as PicRights be housed in a restaurant? Everything becomes much more significant when you look at this image published by a user on Google Street View. On the 1st floor of the restaurant, there is a “business center.” PicRights is probably an empty shell whose legal address is located on the 1st floor of a restaurant acting as a mailbox. This is reassuring.

A galaxy of small companies in different countries

PicRights is a hodgepodge of small companies registered in other countries. By going through the legal (and public) documents, I was able to reconstruct the structure of PicRights.

What to do when you receive an email threat from PicRights?

But let’s get to the heart of the problem: how to react after receiving an email from PicRights?

My interview with Me. Jérôme Tassi and my readings of recent weeks have led me to describe a reaction in 3 steps:

1- Is the request of PicRights justified?

The first question to ask is whether PicRights can claim anything from you, in other words, if you have unduly reproduced an image. Three options are possible. Either you had the right to reproduce this image, and in this case, the case stops there. Or the image for which PicRights claims rights is not the one you used, and everything stops there. Either you used an image without having the rights, and at this point, it is time to read the next paragraph.

If you have used an image without paying for a license, immediately remove your website’s offending image. Read the next paragraph before doing anything.

3 – Assess your options before paying

Requests made by troll copyrights are often abusive. Before paying, you should therefore ask yourself about the original character of the reproduced work. The courts are rigorous in recognizing the actual nature of a piece and thus apply copyright. However, PicRights often claims rights for images that are not, factually, original within the copyright. If you are in this case, you have little to fear (and PicRights knows it).

PicRights claims the copyright to claim compensation. Therefore, threats of prosecution are based on the assumption that the courts will recognize the originality of the work reproduced. However, there is nothing less certain, as explained by Me. Jérôme Tassi, a lawyer at the Paris Bar who specializes in intellectual protection.

In my case, the image used was not original, and it is unlikely that a court would have confirmed the request of PicRights. Indeed, a Google search shows that different photographers took several pictures of the same type without any originality can be claimed in terms of framing, lighting, or post-processing. It is likely that the photographers present were gathered in the same place and were therefore forced to adopt the same angle of view.

I, therefore, invite you to do this verification. If you are a sportsman, do not hesitate to ask PicRights to prove the originality of the photo for which they request compensation. It should calm them down.

You will find below some interesting readings on the actions of PicRights.