What if the metaverse is not realized?

Home » Innovation » What if the metaverse is not realized?

The metaverse was the neologism in fashion at the end of 2021. Announced with great fanfare by Mark Zuckerberg, who sees the future of the Internet, the metaverse could end up being nothing but a vast intellectual swindle. The prophecies of tech giants are not always self-fulfilling. Facebook’s virtual currency, connected speakers, connected glasses are all “revolutions” that did not happen. They swallowed up the hopes of investors looking for the next big trend. The metaverse, already much less popular than its ancestor “second life”, could be nothing more than a deception to maintain a technological bubble. Mark Zuckerberg’s vision of the metaverse, I am sure, will not be achieved.

The most straightforward solution always attracts the human being

In a recent article published on Medium, Joel Stein draws a parallel between the future of the metaverse and that of 3D. Launched in the cinema as early as 1953, it has had only sporadic successes with the release of iconic films (Jaws, Avatar). Stein attributes this failure to the technological layer that “complicates” the experience. Individuals would be attracted to the simplicity of the experience even if the product is not perfect. In other words, there needs to be as little “friction” as possible; the experience needs to be as simple as possible for it to be “consumed.”

In the video, YouTube has become the reference platform despite the poor quality of some content. Tik Tok attracts the favor of young people with clips whose quality is far from the canons of cinema. The story will always take precedence over the packaging.

We have to accept that, for users, simplicity and story are more important and take precedence over artifices (3D, 4D, 4K, 8K, …). The experience must be simple, and that’s exactly what YouTube proposes. Since its creation, Netflix has also understood this and has dreamed of launching the best content for a user without any action on his part. Recommendation algorithms are the cornerstone of this strategy, which aims to decrease the distance between content and consumer.

3 years and gone: connected speakers are no longer a hit

This search for simplicity partly explains the failure of connected speakers. In 2019 I was already wondering about the craze around these devices. What could they possibly bring as added value to their users? It will always be easier to place an order with your smartphone than using a connected speaker.

The interest is fading after the craziness of the first months and the Christmas effect (see graph below). Look, for example, at the evolution of online searches for 2 of the most famous connected speakers: Google Home and Amazon Echo. Year after year, the Christmas peak decreases, and in 2022 the interest is at its lowest. In the end, the connected speaker phenomenon will have taken 4 years to collapse. 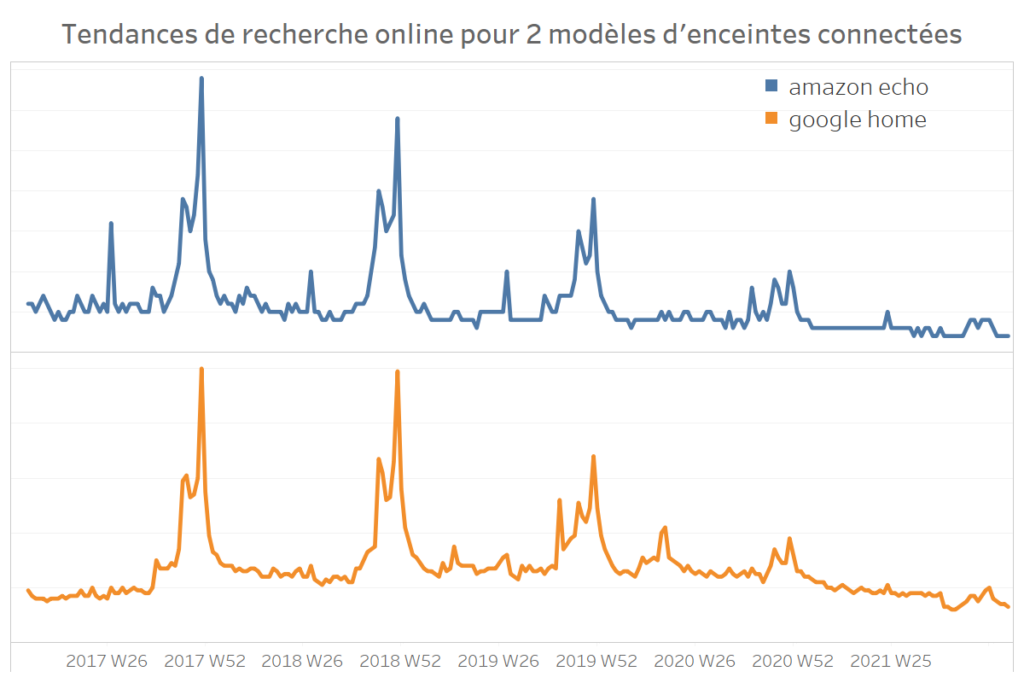 Despite the most optimistic predictions, I think the metaverse will follow connected speakers’ footsteps.

Is the metaverse just a universe built for investors?

I don’t believe in the generalization of the metaverse. A planetary revolution on the scale of the smartphone or Facebook will not happen. At least not in the form that Zuckerberg dreams of, and even less with a VR helmet screwed on your head. To be convinced of this, it is enough to take 2 aspects into account: the barriers to the use of the metaverse on the one hand and a historical-technological perspective on the other.

Barriers to widespread use

Mark Zuckerberg has taken some precautions in recent weeks, saying that creating his vision of the metaverse would take at least 10 years. He thus tempers the impatience of investors always looking for yield. His speech in December 2021 will have had the merit of making the word “metaverse” fashionable. Searches on Google have skyrocketed (see below). 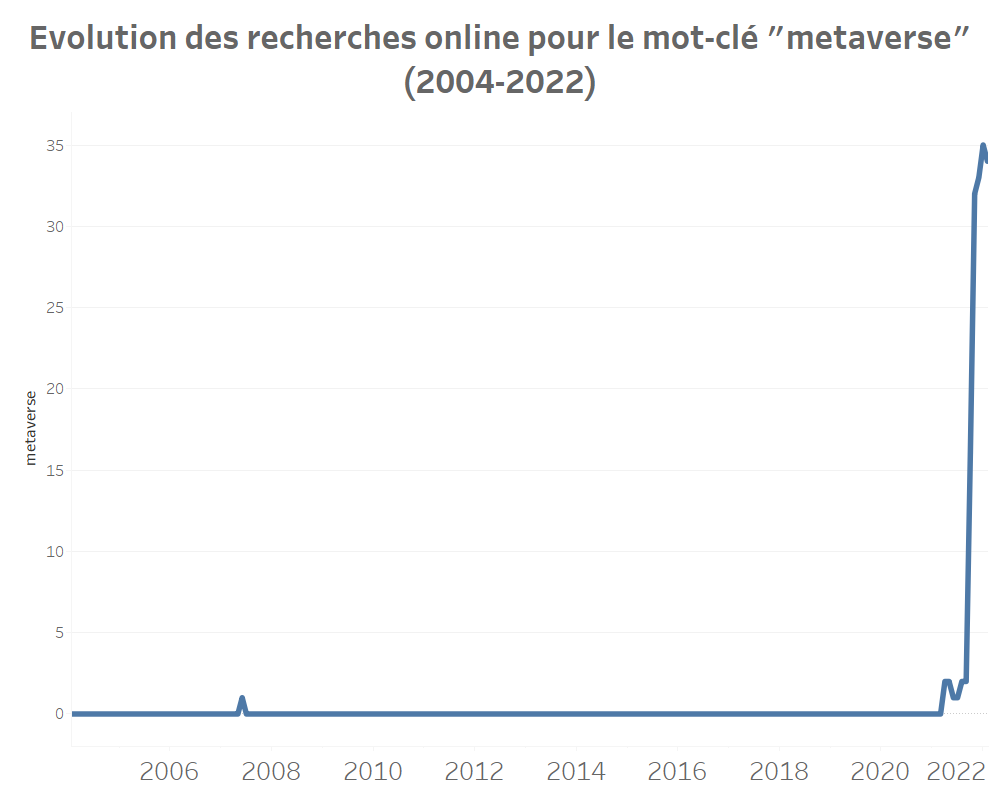 A few months ago, I denounced the double technological and financial bubble we found ourselves in. The last few weeks have proven me right. Netflix has lost more than 20%; Meta has fallen by 25% … investors need to caress new dreams to reinvest, and the metaverse is this new golden goose. By praising the metaverse, Zuckerberg wants to buy time and give hope to investors.

The fear of missing the next revolution is a powerful motivator to invest and fuel innovation. Goldman Sachs assesses the metaverse to be an $8 trillion market. This enthusiasm is contagious. Start-ups are launching every day. Companies are spending millions on virtual land, …

The metaverse is already much less popular than Second Life

But it may well be that the metaverse is not the announced global revolution. We only have to look back 10 years to be convinced of this. At that time, “Second Life,” the ancestor of the metaverse, also had its moment of glory. Looking at it more closely, 2 conclusions are apparent. First, the craze was much higher for “second life.” Secondly, this craze quickly faded away. 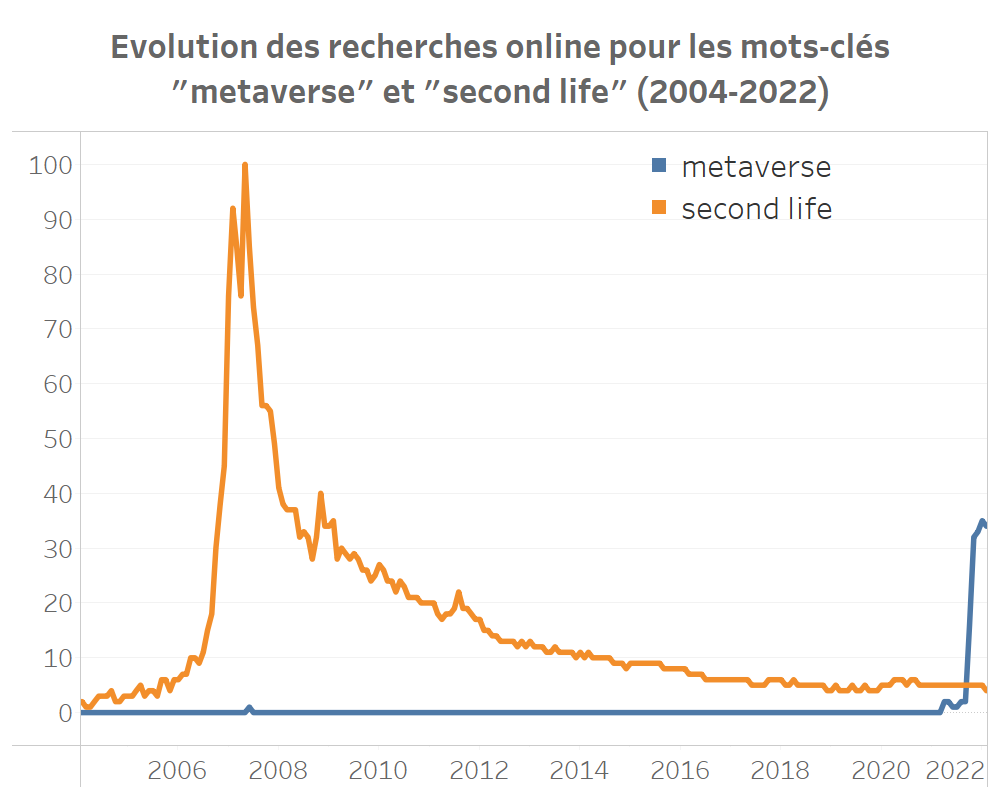 The metaverse will not happen

Connected speakers have remained gadgets that users have grown tired of. Virtual reality, like 3D, will remain a niche technology, but it is illusory to think it will become more democratic. We will not live in the metaverse as Mark Zuckerberg dreams because the proposed experience will always be complicated. We will not live in the metaverse because the “physical” experience will always have something more than the virtual one. The metaverse will, of course, be tried, will find applications with a discerning public, but will not impose itself as a mass technology.

This announced failure is healthy. On the one hand, it will weaken Meta and contribute to deflating the technological bubble. On the other hand, losses of this type remind us that ultimately the users keep the power of decision.