Do you want to be creative? Make sure these 3 factors are brought together

Home » Innovation » Do you want to be creative? Make sure these 3 factors are brought together

Where does creativity come from? Where does the ability to invent and renew oneself come from? In today’s article, I talk about innovation, of course, but also about the mystery of creativity. The example of artistic creation is used as a pretext to highlight 3 factors of creativity.

Factor 1: simplicity as a driver of innovation

I keep telling our customers that a good innovation, that is to say, an innovation whose primary goal is to satisfy and retain customers, must be simple. Simplicity is a virtue that technophiles often forget. While technology seems to be the source of most of today’s innovations, technology must not become the central argument of marketing strategy. Simplicity, the elegance of the solution, must take precedence to focus on customer satisfaction. As Leonardo da Vinci said: “Simplicity is the ultimate sophistication”.

Simplicity is the ultimate sophistication

Merely innovating is perhaps the most difficult of tasks. Over-sophistication is a disease that affects 99% of innovations. To convince you of this, look at the smartphone market. What has happened since the iPhone was launched in 2007: screens have become more prominent, cameras more powerful. But the iPhone of 2007 still covers the needs of 2020. The essence of disruptive innovation is simplicity. Keeping it simple is a challenge, as Vincent Van Gogh said to Paul Gauguin in his time: “How hard it is to be simple”.

This quest for simplicity is a frequent preoccupation of artists.

To convince you of this, here are 2 examples.

The theme of the bird is anchored in 1910 with Brancusi’s creation, which he devoted himself to for nearly 30 years. He declares: “All my life I have sought only the essence of flight”. This search for the essence obliges him to “keep it simple”. Conscious of this connection between simplicity and the search for the essential, he adds: “Simplicity is not a goal in art, but one arrives at simplicity despite oneself, by approaching the real meaning of things”.

Miro’s work, dreamlike, is full of creations that seek to represent an emotion, a sensation. In 1924 Miro rejected realism (copy of the visible world). He creates a new mode of expression, original writing. The sign becomes significant. “To conquer freedom is to conquer simplicity. So, in the end, one line, one colour is enough to make the painting,” says he. 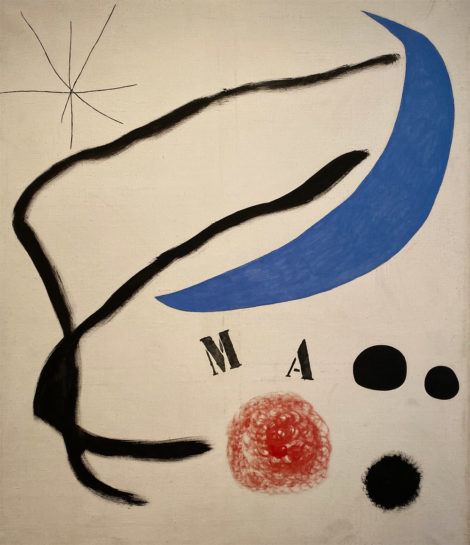 We remember the names of Van Gogh, Brancusi and Miro for the strength of their artistic creations, just as Steve Jobs and James Dyson were chosen for their technological creativity. The parallel is therefore worth drawing between apparently distant fields.

Factor 2: the network, an essential element for generating ideas

In this paragraph, we will discuss the creativity that comes from exchanges with other people. In other words, it is a question of showing that the concentration of fruitful minds boosts creative capacity.

I won’t teach you anything by telling you that creativity comes from the inspiration of other artists. In another article, I talked about how artists reinvented the work of their predecessors or contemporaries, using Caravaggio and Rubens as examples. It is a fact that the course of art has also been influenced by creative hearths, crucibles where artists feed their inspiration and advance their ideas. One will, of course, think of the Netherlands in the 17th century. The Golden Century, as it was called, was built on the proud wealth generated by trade with India and on the birth of several generations of artists ” subsidised ” by this wealth. Venice was another important centre of creativity for the same reasons. At the crossroads of the sea routes, the city’s wealth attracted the most talented artists who, in so doing, contributed to a creative abundance never seen before: the Bellini, Titian, Tintoretto, Veronese, Tiepolo left their mark on the city. They brought in their wake lesser-known artists who swarmed throughout the country (like Carlo Crivelli, who left Venice and made his career in The Marches), or others who would make their fortune elsewhere (El Greco, for example).

However, monetary wealth is not a prerequisite for this emulation. In New Guinea, the Sepik River Valley is known for the intensity of its artistic creation. Wealth in the western sense of the term is a foreign concept in this remote (still today) part of the world. One will also think of cubism, born in Paris in the middle of artists living sparsely, most of them emigrants (Picasso, Modigliani, Gris).

From left to right: Portrait of Innocent X by Velazquez (1650, Galerie Borghese, Rome); The Pope with the Owls by Francis Bacon (1958, Musées Royaux des Beaux-Arts, Brussels)

But this collision of ideas sometimes extends over long distances, temporal or geographical. Temporal at first, as Bacon’s obsessive work with Velazquez’s work (above) testifies. Geographical then as shown by the Cubists’ interest in the arts, still called “primitive” at the end of the 19th century.

How not to see this influence when comparing this Mahongwé mask (Congo, below) and Picasso’s The Avignon Maidens. Yet the Catalan artist never had the opportunity to see this particular mask. It was documented and brought back to Europe after the Avignon Maidens had been painted. It is an impressive artistic trajectory that brings artists separated, if not by decades, at least by thousands of kilometres, into collision.

It would seem, therefore, that artistic creation converges at certain times towards given forms and motifs. This convergence has also been observed in the fields of science and technology. As Ogburn and Thomas (1922) point out in their article “Are Inventions Inevitable? A Note on Social Evolution“, sunspots were discovered in 1611 simultaneously by four scientists in four different countries. Galileo in Italy, Scheiner in Germany, Fabricius in Holland and Harriott in England. Take a look at this article to convince yourself of one thing: when the conditions are right, the same idea can germinate simultaneously in several places.

Factor 3: when you have nothing, you need to be creative

The answer to this question became clear to me during a visit to the Louvre. In one of the rooms are presented objects related to the art of the Cycladic civilisation. This group of islands in the Aegean Sea saw the birth in the 3rd century of a culture that produced white marble idols of remarkable aesthetic purity.

The technical limits to marble work, undoubtedly imposed on the artists of the Cyclades an economy of means in the shaping of their creations. The same economy of means can be found in other figurines made at similar times in different places on the European continent and in the Middle East: in Western Anatolia (around 3300-3000 BC), in Sardinia (around 4000-3000 BC), in Cyprus (around 4000 BC). The aesthetic proximity of these female figures inspired a video (see below) that encourages us to reflect on the factors that have led to this proximity.

The scarcity of resources is a catalyst for creativity.

Then, of course, there could have been exchanges between these peoples. But wouldn’t it be more elegant to envisage another hypothesis, that of a constraint imposed by matter and by the technology available at that remote time and limited techniques which impose de facto an economy of means and an obligation of simplicity.

In business too, this economy of means is a source of creativity. Take the example of Timothy Prestero. He invented an incubator for new-borns from car parts. The technology is simple. So simple that even in the most remote countries, local people can do the repairs themselves. The added value is enormous since high-tech incubators have a lifespan of only a few years in these countries. Another valid example is the Apollo 13 mission. A C02 filter had to be created from scratch to save the astronauts.

In other words: the scarcity of resources is a catalyst for creativity. You will innovate better when you are destitute.

By way of conclusion

In this article, I have tried to show that creativity requires several preconditions: