The Covid crisis: a double financial and technological bubble is forming

Home » Strategy » The Covid crisis: a double financial and technological bubble is forming

Do you remember the technology bubble of the 2000s? Do you remember the financial bubble of 2008? Well, 2021 marks the birth of a double bubble of technology AND finance that will wreak havoc. Get ready for a tidal wave that will engulf everything. If you don’t believe in the end of the world today, take the time to read the following lines to convince yourself. Onboard the crazy car of debt, we are heading at full speed towards the precipice. Not sure that the passengers will escape.

The Covid crisis brings together two speculative bubbles, technological and financial, which form an explosive cocktail.

The technology bubble is the result of promises of unattainable returns. It echoes other crises, long forgotten, that marked the 18th and 19th centuries (the New World bubble, the canal bubble, the railroad bubble).
On the other hand, the financial bubble is fueled by overabundant liquidity that leads to irrational investments by neophytes. This is reminiscent of the tulip crisis and the 1929 crisis.

The conditions are, therefore, ripe for a mega-crash that will reset the scales. Because even if the stock market madness of the last few months is based on sand, technological progress is no less essential to face the changes of civilization that await us.

Stock market prices are out of sync with industrial reality

What is paradoxical with the Covid crisis is that we witnessed, on the one hand, a never-seen slowdown of the world economy, and on the other hand, an ultra-fast recovery of the stock market.

These prices are driven by technology firms whose stock prices reflect staggering promises of returns. This is not the first time. Here is a short chronology of crises caused by dashed technological hopes:

Alongside technology bubbles, financial bubbles are also forming. A little historical background is in order for those who think that the 2008 crisis was the first.

We can talk for a long time about the mega-bubble of the years 2020-2021, but in the end, it is the double product of a technological bubble and a financial bubble.

The financial bubble is created by central banks’ accommodative policies, which lend money at meager rates or even offer it. We remember, for example, the speculative episodes caused by small savers investing their “Biden cheques.”

The promises of the digital revolution fuel the technology bubble. Established companies see their share prices soar while start-ups benefit from massive investments intending to make them the next unicorns. The abundance of money has even led to the emergence of empty shells, the SPACs (“Special Purpose Acquisition Company”). It’s the last straw.

For the last 100 years, we have seen that technological progress has fueled the stock market. In the long term, the upward trend is undeniable, a sign that wealth is being created. We can, therefore, reasonably believe that this upward trend will continue.  I want to point out at the outset that this interrupted uptrend is characteristic of the US market. The Dow Jones index has tripled since its 1999 level, while the European stock markets will be more or less at the same level in 2021 as they were before the internet bubble burst.

Despite the unstoppable march of progress, there are many accidents (the grey bands on the macrotrends.net chart below show this). 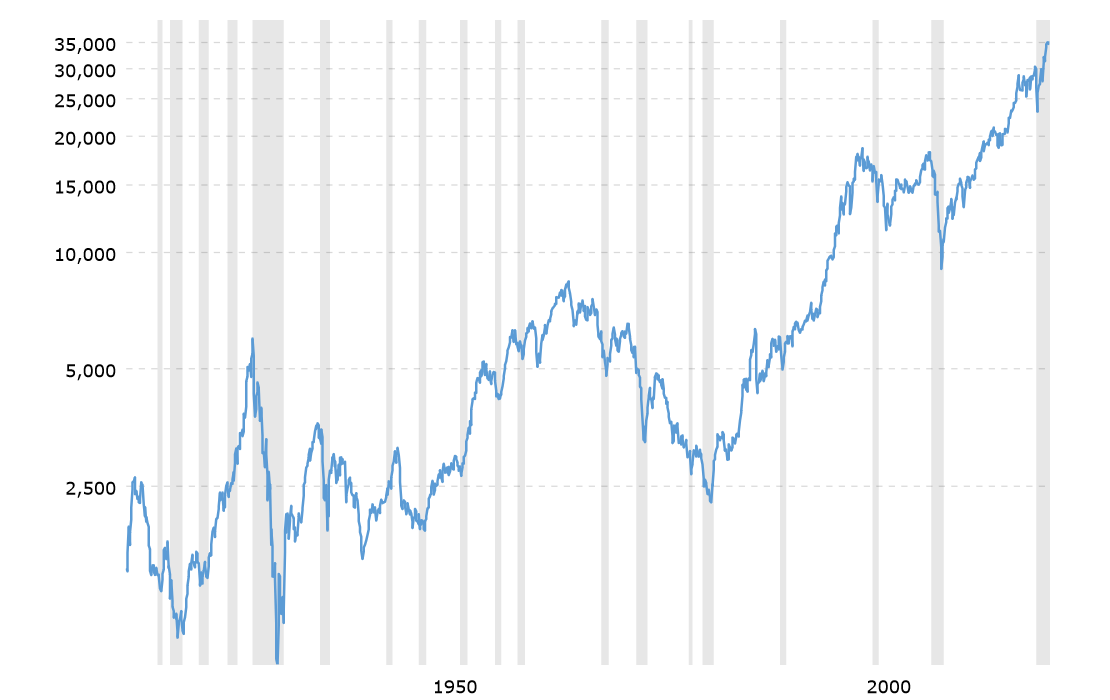 But each wave of solid growth must be followed by a crash. A phase of creative destruction is necessary, and I think that’s what’s ahead. Too much money has been invested in futile technologies with no future. Too many inexperienced people started trading in 2020 and artificially inflated the prices. Too much hope has been put in the digital transition when the emergency is the energy transition.

What Investment strategies for the future?

Not being a stock market professional, I limit myself to investing (very little) in what I understand. I am very cautious and pessimistic by nature.

My expertise is in “data,” I acquired the conviction that the term “AI” had become a buzzword and that the hopes carried in this field could be dashed. A repeat of the 1999-2000 crisis. Newly listed technology companies should suffer compared to the big established names, especially those that are surfing on marginal innovations.

As is often the case in large-scale crises, I think that safe havens will also benefit greatly. I believe in precious metals and the longer term in businesses working on the energy transition (primarily hydrogen).