Lego store New-York: personalization and phygital on the agenda

The Lego Store on 5th Avenue in New York was the retail sensation of summer 2021. It opened on June 24, 2021, at the foot of the Rockefeller Center. It is not the first Lego store (see, for example, our article on the one in London) but probably the most “experiential.”

Follow us for a dive into the new Lego flagship store with our onsite reporter, Olivier Delangre, CEO of Amoobi. 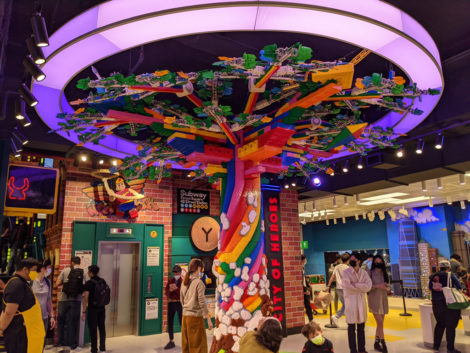 The most monumental realization in the Lego store in New York is the “Tree of Discovery.” It is composed of 880.000 bricks!

Each Lego store relies on giant realizations to impress the visitor. The “Tree of Discovery” (880.000 bricks is imposing).

These giant realizations are generally adapted to fit the place where the Lego store is located. We will find the Tower Bridge in London and the Arc de Triomphe in Paris. The Lego Store in New York is no exception to the rule, with the Statue of Liberty (whose construction boxes are used as souvenirs), a giant yellow cab that you can climb into, the Empire State Building, and many others (the reproduction of Times Square in Lego bricks is particularly impressive).

Lesson N°1: adapt the products as much as possible to the immediate environment

Lesson n°2: understand the profile of the customers (in this case tourists) to sell them what they want (souvenirs) 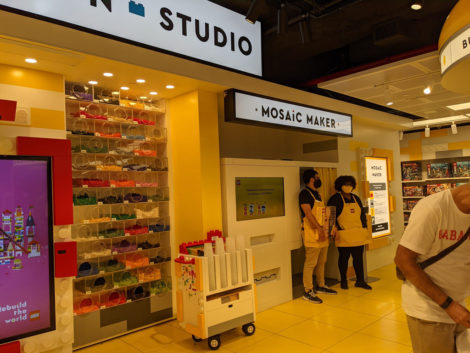 The Lego personalization studio is one of the most exciting parts of the New York flagship store.

The Lego store in New York also multiplies the workshops of personalization. The process is a classic genre (also found in Nike flagship stores or American Eagle, for example), but it takes a new dimension here.

You will find the “personalization studio,” which includes 2 new experiences: first, a “mosaic” workshop, which allows you to take a picture of yourself and convert it into a “pixelated” version of you based on Lego bricks; then a mini-figurine factory that will enable you to create a personalized Lego figurine instead of assembling existing pieces.

Lesson n°3: personalize the experience so that the customer feels “special” and can take ownership (figuratively and literally) of the product 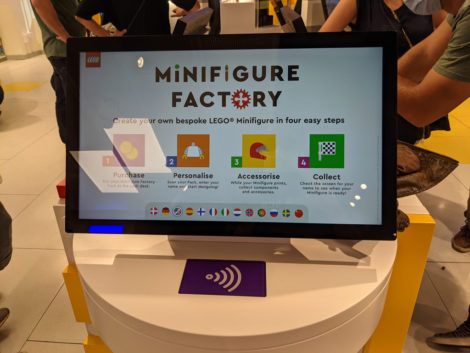 The experience of the Lego store in New York is made phygital thanks to numerous touch screens and the “laboratory” (Brick Lab), which allows living a virtual experience.

The Lego Brick Lab is the ultimate phygital experience at Lego since it transforms a natural element (your Lego creation that you can scan) into a virtual component that you can animate on touch screens. You can decide the expression of the character thanks to an interactive screen that reproduces the expressions of your face. The effect is stunning. To appreciate it, you can have a look at the video below. 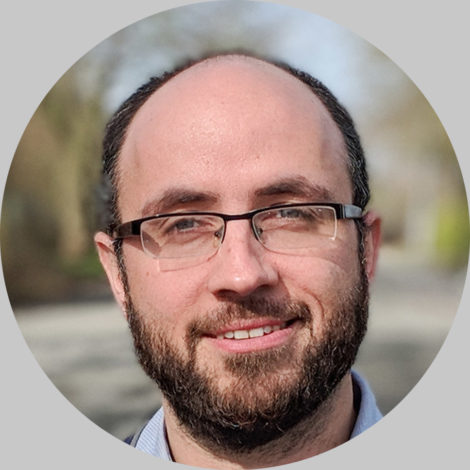 I am one of those adults who, from time to time, relax by assembling a Lego model for adults. So, the visit to their flagship store was a must for me. I was immediately struck by the presence of adult models (Creator, technical, architect) from the entrance. Proof if needed that the Lego customer is not only a child! There are also several giant Lego models on the first floor, like this life-size cab or several iconic New York monuments. Very impressive.

The most interesting retail inspiration is on the second floor. Several customization experiences are proposed. Create your character (some elements can be built before your eyes), or create a Lego mosaic based on your photo. Lego is playing hard at the unique experience that will allow it to associate a very positive memory to the Lego brand. Even if not all brands have the sympathy capital of Lego, it is a source of inspiration for all brands to redefine how to create a unique link with its existing and future customers.