On LinkedIn, women are 17.3% more viral than men

Is it better to be a woman to be a LinkedIn influencer? At least, that’s what a preliminary study we conducted suggested. Today we extend this study to nearly 5 million LinkedIn posts. The results show that beyond 500 reactions, women’s posts get 17.3% more reactions. However, there are significant differences by language.

The dataset used is the same one used to analyze the virality factors on LinkedIn, the role of emojis, and hashtags.

Anatella was used to prepare the data. The processing is ultra-fast (about 60 seconds for 4.6 million lines).

The following operations have been performed:

From a technical point of view, you should note that exporting to the .hyper format was a determining factor. It is indeed the only format that allowed the exploitation of the database under Tableau. We should remember that output formats are a decisive factor in choosing an ETL. In this field, Anatella was the winner in my ranking.

In previous research, we defined virality on LinkedIn as a post that garnered 100 or more reactions. This corresponded to about 3.7% of the 4.6 million posts we studied. In order not to create an asymmetry in the results, we excluded all LinkedIn users with more than 25,000 connections from our analysis. In this way, we study the phenomenon of virality from the perspective of the majority of users.

In the graph below, we provide more details about the distribution of reactions on LinkedIn. 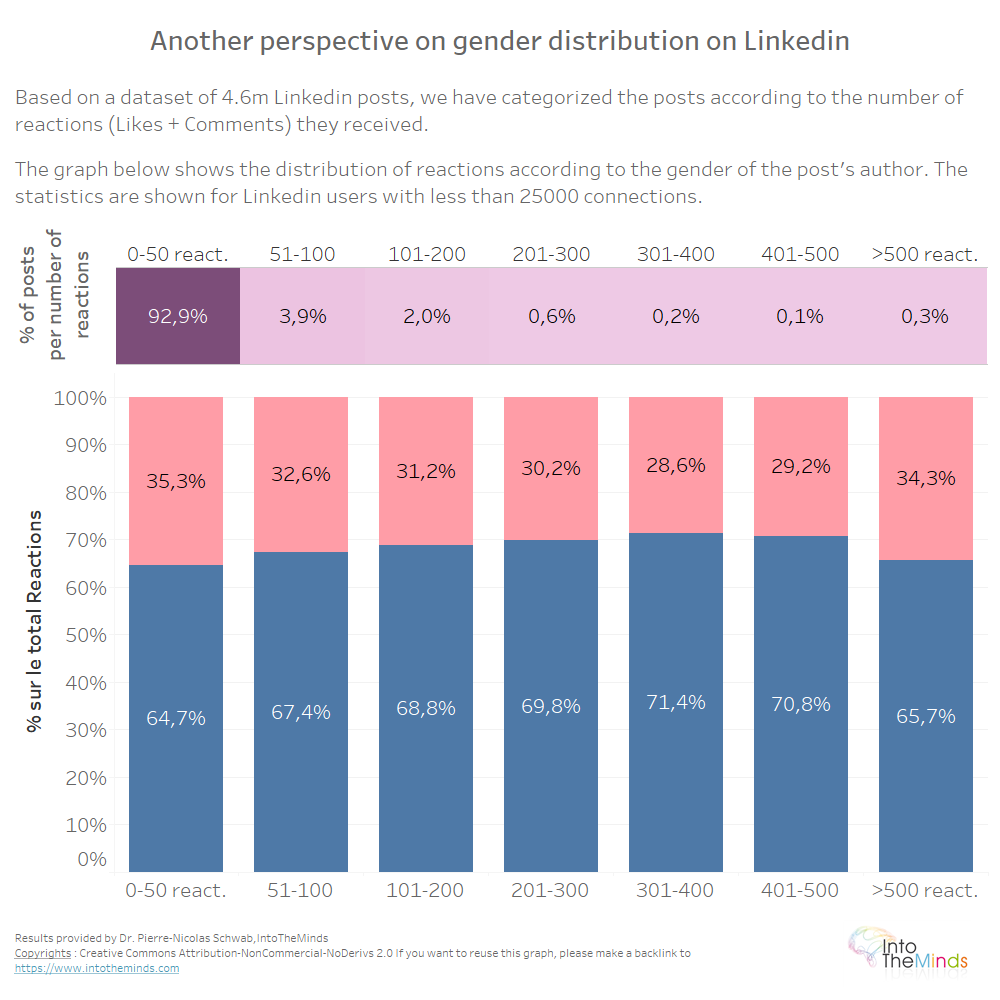 The combined effect of ultra-viral posts and the under-representation of women on LinkedIn allows women to dominate the rankings.

Women dominate for the most viral posts

The predominance in the number of men in the viral posts is visible in the graph below. As in the previous one, the whole corpus is analyzed without distinction of language. 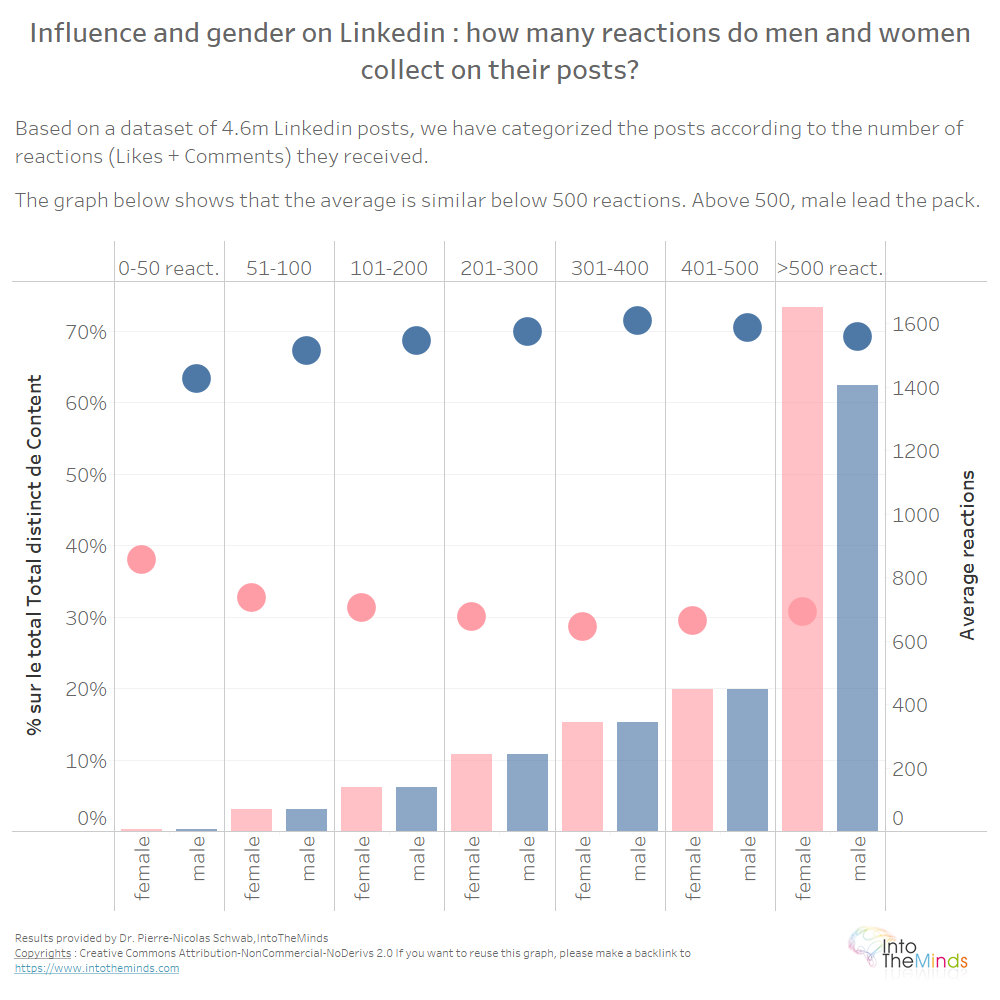 Influence on LinkedIn: a question of language?

In the last analysis, we focused on all the posts that had 500 or more reactions. We analyzed them according to their language. We only retained the languages for which we had a sample of at least 100 viral posts. This limit was only reached for Dutch, English, French, German, Italian, Portuguese, and Spanish.

The analysis by language offers a different reading of the previously observed phenomenon. Men are ahead of women in German, Italian, and Spanish but are clearly in second place in all other languages. The effect that we highlighted in our preliminary research in French is thus confirmed. 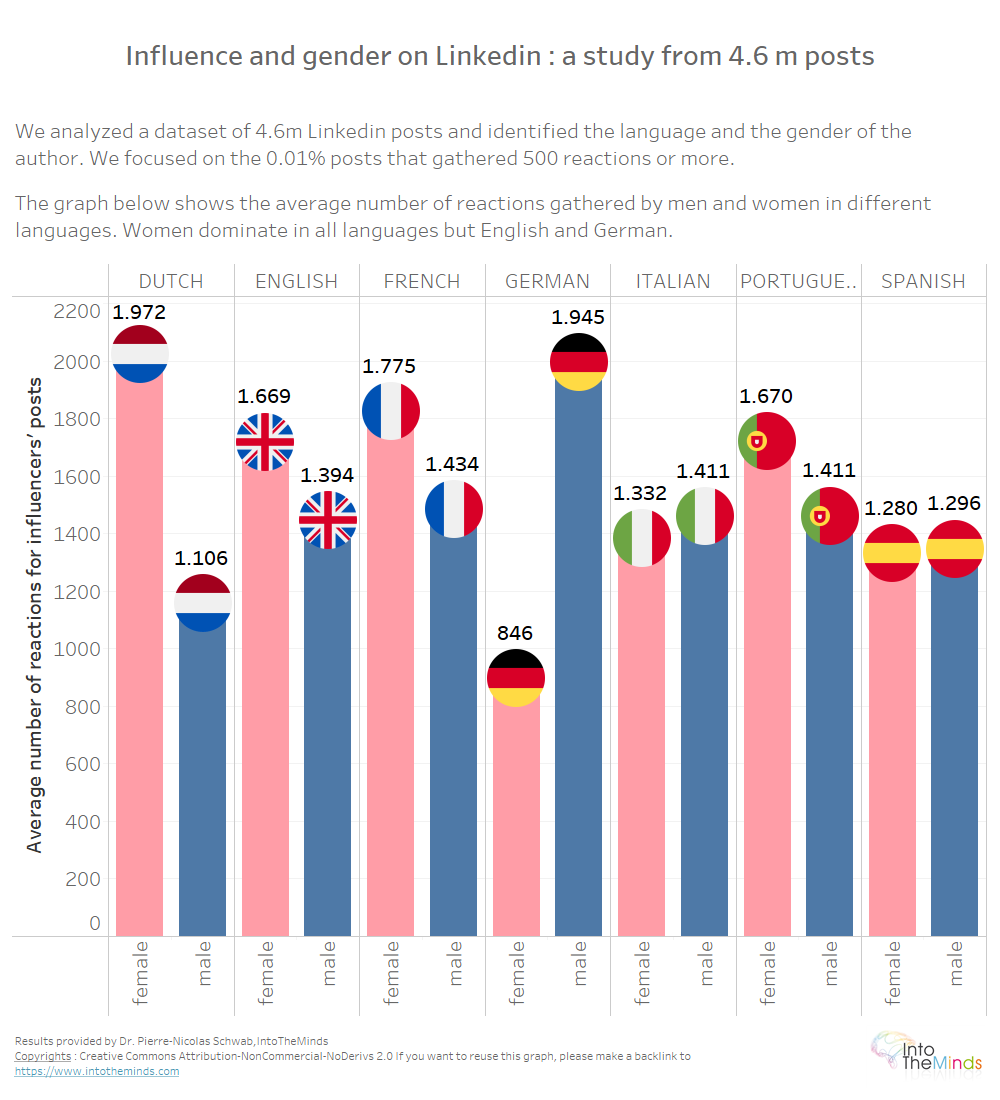 Let us beware of jumping to conclusions about the differences between languages. For some of them, the samples remain pretty small. This is, of course, not abnormal since English primarily dominates LinkedIn, and only 0.3% of posts exceed 500 reactions.

Some might attribute the observed differences to skewness in the distributions. A test on the median values is necessary. We see that they are relatively close between men and women, whatever the language. Differences remain, however, which confirm the effects for Dutch, English, French, and Spanish. The situation is reversed in Portuguese. 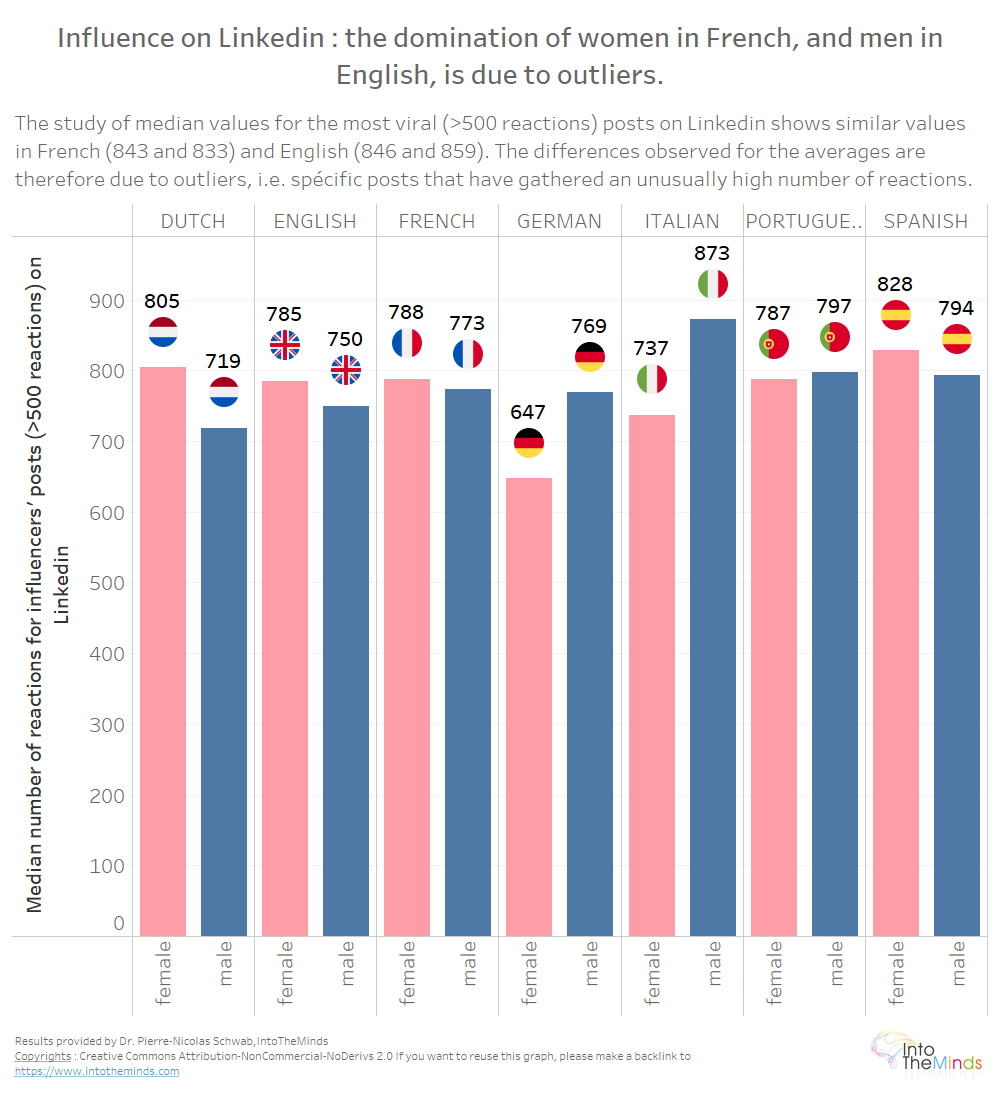 The case of English is fascinating because it will allow us to talk again about emojis on LinkedIn and, in particular, the panda. These are LinkedIn posts that have amassed an unusually high number of reactions. We can anticipate outlier effects.

With 223800 reactions, the trophy for the most viral LinkedIn post goes to a Frenchman: Laurent Botroix. He is the author of the famous post “do you see the panda?” which drove the LinkedIn algorithm crazy in 2020. Chyna Hill is in second place with 153250 reactions on a single post.

It is the combined effect of ultra-viral posts and the under-representation of women on LinkedIn (1 woman for every 2 men), which allows the latter to dominate the ranking.