How many hashtags should you put in your LinkedIn posts? [Research]

Home » big data » How many hashtags should you put in your LinkedIn posts? [Research]

How many hashtags should you put in your LinkedIn posts to increase their visibility? By the way, is it a good thing to put hashtags, and how does the LinkedIn algorithm react? I have analyzed 4.988 million LinkedIn posts in more than 100 countries, and I will give you the answer in this article. If you want to receive more exclusive results by email, please subscribe to my newsletter and follow me on LinkedIn.

How many hashtags should you put in a post on LinkedIn?

Long answer: The probability of getting 100 likes or comments on a LinkedIn post is 3.307% when you have a network of fewer than 25,000 followers. To increase this probability, you have to keep in mind these 3 rules: 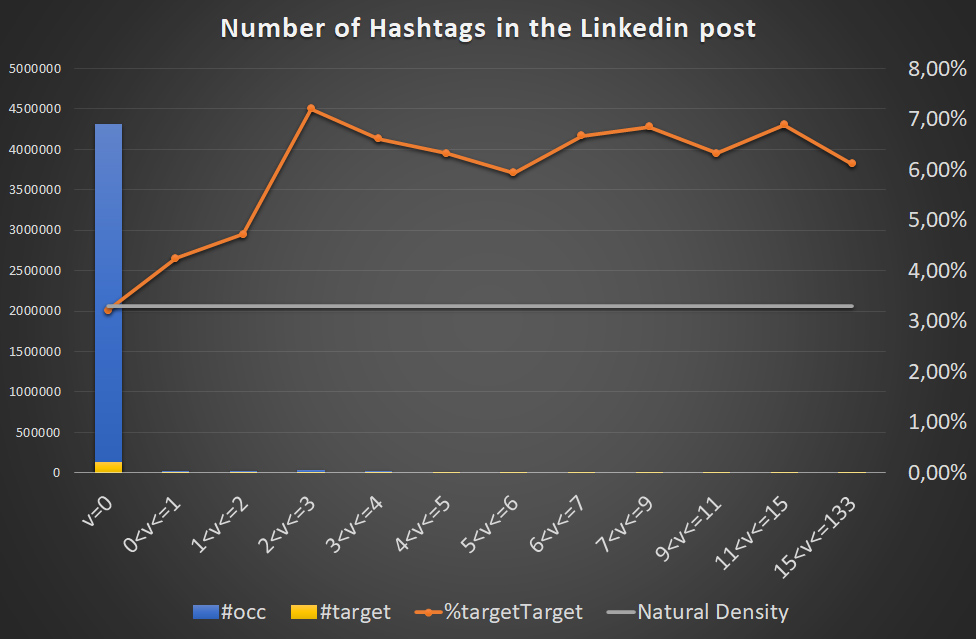 Analysis of the probability of getting 100 reactions on a LinkedIn post based on the number of hashtags included in the post.

How to analyze the influence of hashtags on the reach of LinkedIn posts?

To start, you need a dataset… a very significant one. Thanks to Linkalyze, I accessed a dataset of 4,988 million posts on LinkedIn (Thanks Sylvain, Thomas, and Laetitia). This dataset includes the author’s name, the text of the post, the number of likes, the number of comments.

What are hashtags used for on LinkedIn?

There are several hypotheses about the role of hashtags on LinkedIn. The hashtags would allow the algorithm to categorize your post better and thus distribute it better. This hypothesis is, of course, attractive. But we should not forget that from a semiological point of view, the simple fact of including a hashtag also attracts more attention from the Internet user. The research I mentioned here showed a positive effect of keywords placed at the beginning of the message.

The data preparation in Anatella was based on JSON files.

After some classical cleaning operations, I enriched the database of posts with data on their authors: number of connections, city, country, …

For the modeling, I used the following variables:

The algorithm used in Timi allows building several successive statistical models. First, all the independent variables are taken into account, and then a “pruning” is performed to eliminate the least predictive variables.

Results in detail: the effect of hashtags on the reach of your LinkedIn posts

Here is the result in detail (and in animated version).

The blue line represents the probability of getting more than 100 likes on a LinkedIn post. This probability is 3.307%.

We observe that the positive effect is maximum when the post has 3 hashtags: the probability rises to 7.2% to exceed 100 reactions. When we exceed the 3 hashtags, the chance decreases slightly and varies between 5.94% and 6.89%. The maximum observed is 133 hashtags in a single post!

You can find the detailed results in the table below.

These results represent only one particular perspective on the usefulness of hashtags in LinkedIn publications. It would be necessary to deepen the subject by verifying that the results remain the same when the number of reactions (likes + comments) and the number of connections vary. If you’re interested in these topics, feel free to send me a connection request … on LinkedIn🙂