DIONE: What does a good internationalization strategy look like?

Home » Strategy » DIONE: What does a good internationalization strategy look like?

During our coverage of SIAL, we met several entrepreneurs who are redoubling their ingenuity in their internationalization strategy. Lithuanian ice cream producer DIONE is a shining example! First, the family-owned company developed largely on its territory before embarking on an inspiring international expansion. Today, the manufacturer can boast of being recognized all over the world. Europe, Middle East, Maghreb, East Asia: DIONE ice creams are traveling the world thanks to an efficient marketing mix. Here we reveal the keys to the success of one of the rising stars of the food industry! 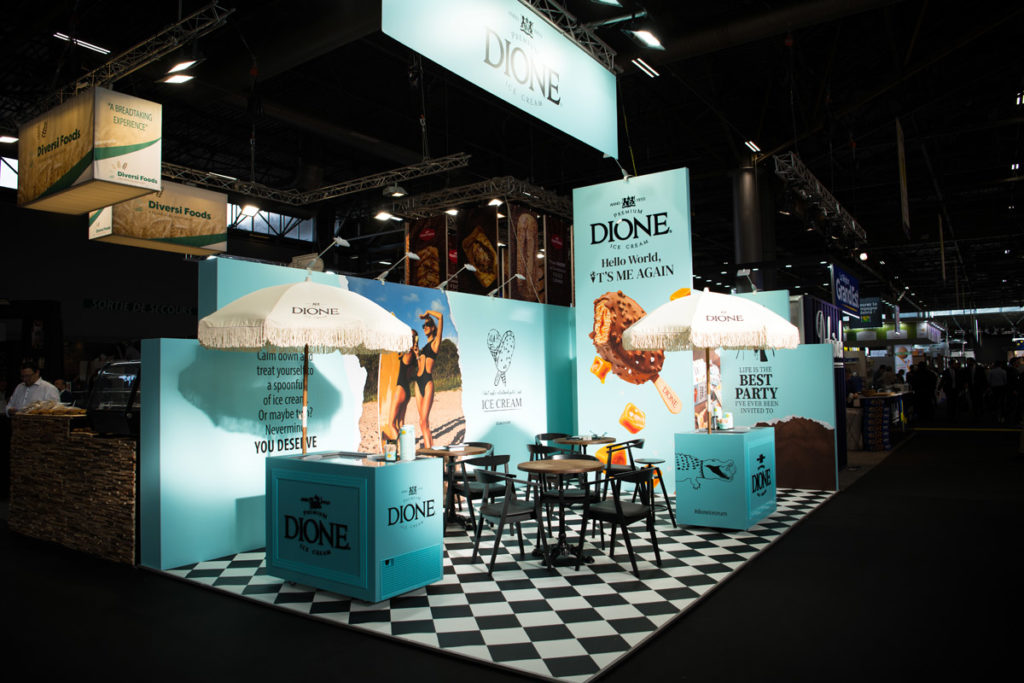 A family-owned company with a well-honed internationalization strategy

Founded in the 1950s, DIONE is, above all, a family business. After its success in Lithuania, it quickly spread its wings beyond its borders. Today, the brand is distributed in many countries, and the internationalization of its natural referencing is worth the detour.

The manufacturer based in Klaipeda (Lithuania) currently sells its products in about 20 countries!
Indeed, thanks to the distribution channels of its many partners, DIONE’s ice creams are available to consumers:

To understand the reasons for the success of DIONE’s internationalization strategy, we must first look at the products themselves. Its production chain is based on three conditions: quality, local, and efficiency. The ingredients used are either locally sourced or imported from European regions known for their good food. For example, the milk is produced in Lithuania, while the pistachios come from Sicily and the chocolate from Brussels. 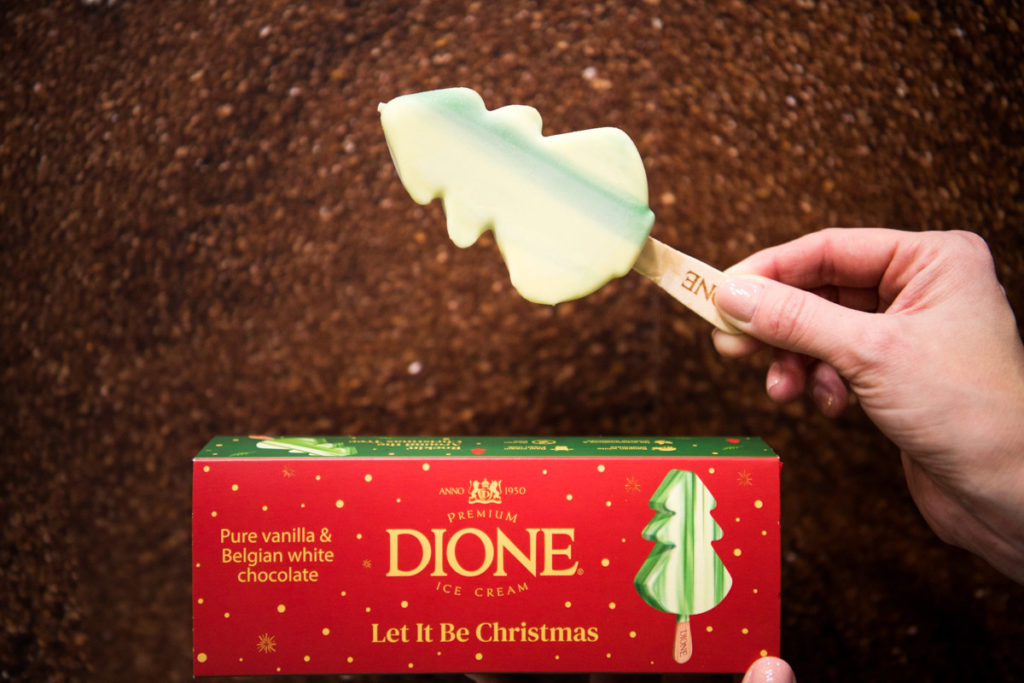 At SIAL, the aesthetics of the DIONE brand stood out for two reasons: its bright colors, and a unique product design

Finally, the originality of the brand is not limited to the innovative shapes of its ice creams. It is also found in the speed of the transformation of the products. It takes only 48 hours to make its ice cream from milk alone. Finally, its marketing positioning has been clear: DIONE’s ice creams are top-of-the-range products. Here, ice creams are no longer consumer goods but gifts for your loved ones! This is undoubtedly one of the reasons why foreign retailers include DIONE in their product range. 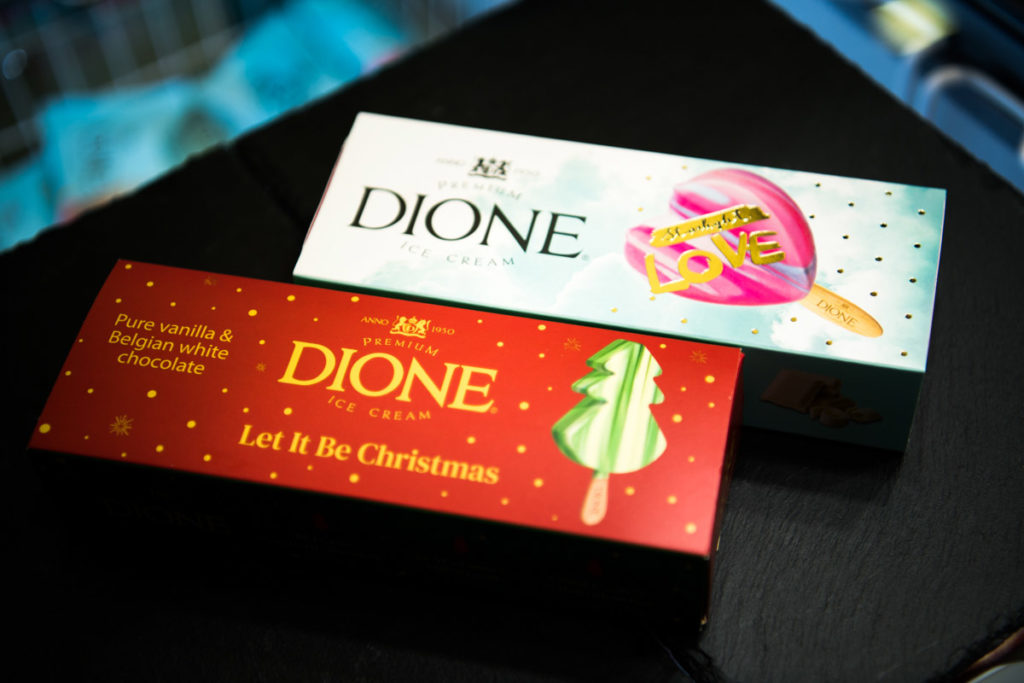 Dione ice creams are given a very premium packaging.

SEO: the company is ranked high on Google

The brand is now recognizable on several continents, translating into good natural referencing. In fact, according to data from Ahrefs (as of November 3, 2022), DIONE generates organic traffic in no less than 31 countries. Moreover, DIONE has slipped into the top 100 Google searches for 332 keywords in these countries. This is proof of a well-executed inbound marketing strategy!

To illustrate this point, please find below the top 10 nations most fond of the brand.

What should we retain from this tableau? First, DIONE’s internationalization strategy includes more than just Europe. This table includes countries in the Middle East, Asia, and North Africa. Secondly, as for the keywords generating the most traffic, we would like to point out two things: 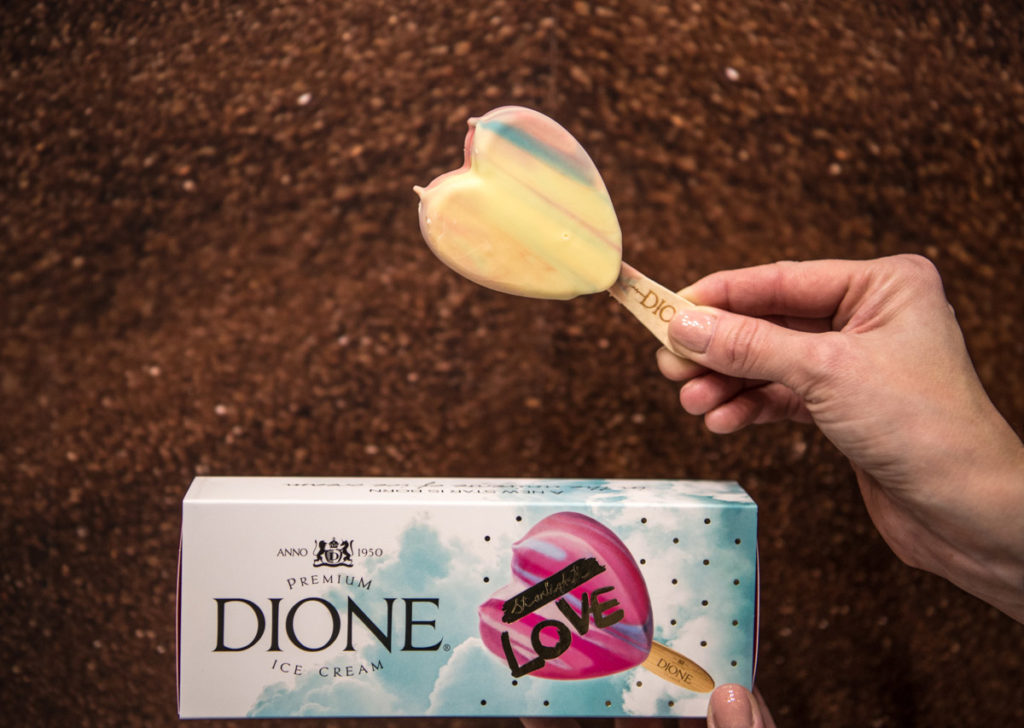 How to succeed in your internationalization strategy according to DIONE

Maintain a brand image in line with market trends

DIONE’s SEO statistics show that the brand is more than just an ice cream producer. It is set to become a major player in the consumer market of tomorrow. More ecological, healthier, and always more original. In this sense, the company perfectly follows the codes proposed by the food trends. Finally, its intercontinental success proves that the direction taken by the sector is destined to be global.

Re-imagining packaging as a selling point

Secondly, DIONE’s marketing innovation also involves innovative packaging. As the holiday season approaches, the packaging of its ice creams fulfills a dual purpose. Once the product is consumed, the packaging becomes a decorative object. Its attractive colors and the warm messages on the packaging make it an ideal decoration under the Christmas tree. Then, keeping the packaging means encouraging recycling and thus creating a real parallel market.

How to increase awareness outside the domestic market? DIONE has an answer for everything: the brand has opted for high-profile partnerships abroad.

In Portugal, the company partnered with Rock in Rio 2022, one of the world’s largest music festivals. Festival-goers could discover its products and help spread the “DIONE” name throughout the country. This collaboration also led to the appearance of a 100% Portuguese version of the DIONE website. 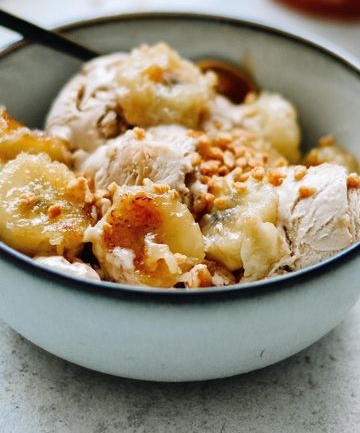 Cooking tips and recipes proposed by the manufacturer can be found on their digital platforms (source: DIONE Instagram account)

Secondly, the manufacturer is one of the official sponsors of CD Leganes, a professional soccer club on the outskirts of Madrid. This partnership, established in 2019, was recently renewed for the 2022/2023 season. Thanks to this, the company is making a name for itself in Spain:

Finally, let’s head to South Korea, where DIONE has made a big impact! By partnering with a major local TV shopping show, the manufacturer has made a spectacular breakthrough in the South Korean market. In one show, the ice cream maker realized several thousand sales, 7,000 kilometers from its native Lithuania!

Nearly 5,000 boxes of DIONE-stamped products were sold within an hour of the show.

Lastly, DIONE’s strong presence on social media greatly simplifies the implementation of its internationalization strategy. The manufacturer strives to maintain a regular, multi-channel editorial calendar on Instagram, Facebook, and LinkedIn.

Socialblade’s numbers are unequivocal: the ice cream producer constantly publishes and shows in the number of followers gained. Between May and November 2022, DIONE saw a growth in its community of around 7.3%. This corresponds to an increase of 290 subscribers in six months. The editorial line is aesthetically pleasing and gives good advice to its followers, as evidenced by this post from last September. 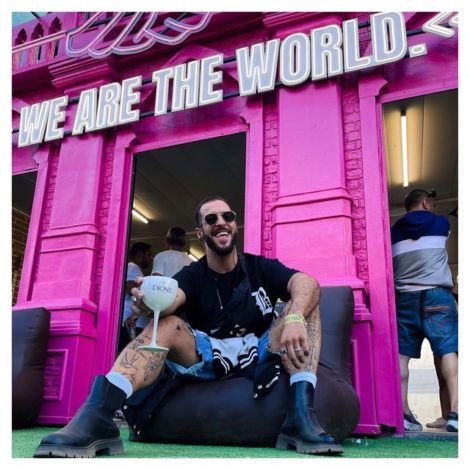