Music streaming: the primary source of income for the music industries

Home » Misc. » Music streaming: the primary source of income for the music industries

While the sales physical formats are suffering, the SNEP (National Union of Phonographic Publishing) report reveals that only the sales of vinyl’s are on the rise in France, attracting consumers to their vintage and authentic side. More and more music lovers are using digital platforms such as music streaming platforms to listen to their favourite artists and music while discovering new musical creations.

What is “Music Streaming”?

Music streaming is a method of broadcasting music and videos via the Internet, or live. This term includes both free and premium paying platforms that offer music to their users as well as digital radios and is therefore opposed to downloading, which allows music to be played offline and at any time.

Video streaming as offered on to the free YouTube platform is an integral part of music streaming, the income of which comes mainly from advertising. Whether they are free or paid for like Spotify, Deezer or Soundcloud, these platforms are experiencing a steady increase in their usage rates.

The impact of music streaming in the United States and Europe

The report released by the RIAA (Recording Industry Association of America) reveals that music downloading income has been halved since 2015, while music streaming income has risen from $2.3 billion to $7.4 billion in 4 years (2015-2018). Thus, music streaming currently represents 75% of the music industry’s turnover in the USA. 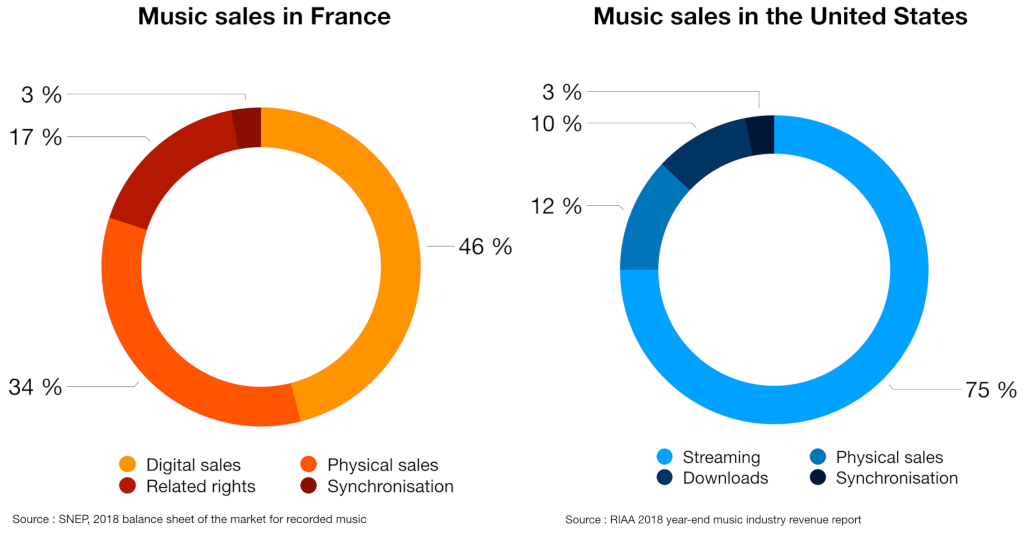 In 2018, the giant Google launched a platform that could be considered a direct competitor of Spotify by developing YouTube Music, based on the same compelling feature as the most popular audio streaming platforms.

Future developments are closely linked to technological innovations. Indeed, the more precise the algorithms are in the analysis of user profiles, the more faithful the musical suggestions will be to the musical affinities of the latter.

Statista forecasts a 4% increase in annual turnover from music streaming by 2023 globally. This assumption includes an increase of more than 3% for the US market and more than 5% in Europe. As for the global market entry rate, it is also expected to increase from 14.7% in 2019 to 16.1% worldwide by 2023, according to Statista’s forecasts. The market entry rate is expected to rise to nearly 60% in the United States and from 17% to 22% in Europe by 2023.