Artificial intelligence: partner or substitute for the performing arts?

The most significant milestones separating AI and artistic creation 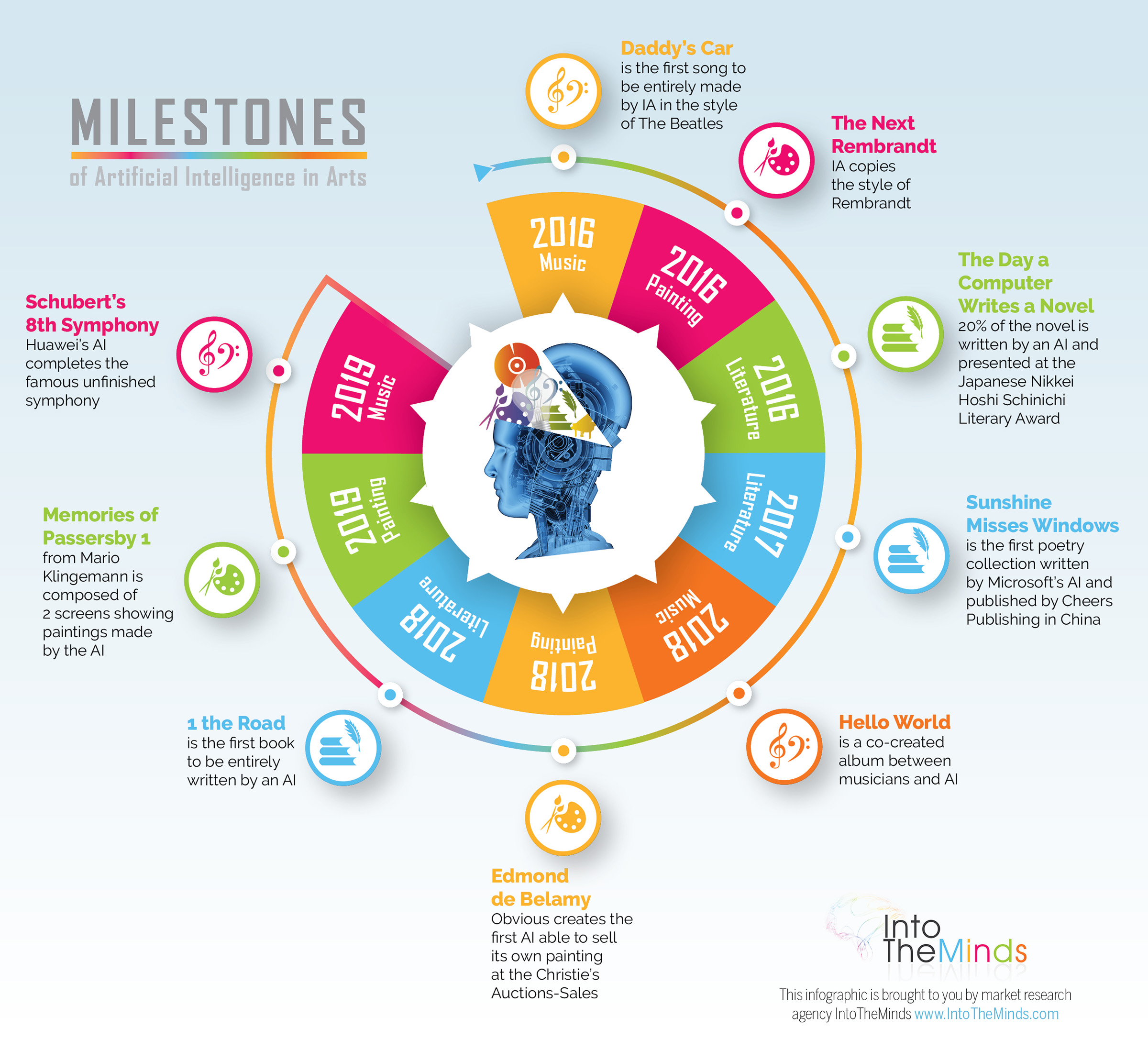 Read also
Artificial intelligence: a new opponent of reference in the gaming world

Frank Madlener, head of the IRCAM (Institute for Acoustic/Music Research and Coordination) has been directing his research for 50 years towards the perfect balance between the machine and the human in terms of musicology. Since 1980, IRCAM researchers have been able to format AIs to create pieces “like” great composers from recurring “patterns” in their musical works. However, human intervention has always been necessary to make and finalise a work of music. Ambition is about discovery. Indeed, the aim is not for artificial intelligence to take the composer’s place but to allow him to explore new creative horizons.

Read also
Artificial intelligence won't replace you if you are creative: here's why

In 2012, researcher François Pachet incorporated into the AI “Flow Machines” about 13,000 pieces of music, whose notes, chords, melody, rhythm, and so on, will be analysed by the AI and used to generate musical statistics. Here again, the underlying idea is to successfully offer new alternatives to composers during their creative processes by giving them access to a database of chords, harmonies and melodies that is broader than their own.

In 2016, scientists at the SONY CSL Research Laboratory released the first music created by artificial intelligence: Daddy’s Car inspired by The Beatles.

However, it is clear, and specialists agree on this point, that machines, computers and AIs can certainly create content – whether musical, literary or other – but cannot give a justified meaning to their creation. Similarly, even though their achievements are of high quality, they are not aware of the interest they may have for the public.
No doubt the AIs will not be able to create a hit of the year tomorrow. However, the sounds developed are already quite acceptable for use in the background of videos or to change traditional waiting music that we all detest, for example.

In 2018, the Skygge collective launched the album Hello World, a fantastic co-production between musicians and an AI. The latter can create the score of a piece in its entirety. However, the final validation is up to the musicians.
More recently, at the beginning of February 2019, the Chinese company Huawei unveils the latest creation of an “in-house” AI: the finalisation of Franz Schubert’s Symphony No. 8, a work that has remained unfinished since 1822. The finale is, therefore, undoubtedly, played by an orchestra, but conceived by artificial intelligence. The latter analysed the first movements of the symphony to create its finale.

Various projects and endeavours connect music and artificial intelligence: Melodrive in Berlin is an AI that composes original music live and in real time. In London, the initiative behind the creation of the AI Jukedeck offers the possibility for website users to create their music by merely giving information about the kind of sound they would like, the tone, tempo, instruments and length of the piece, and this without any royalties.

These last words raise the question of royalties and copyright. Could an AI benefit from these? Would artists working with AI still be subject to the same rights as before?

In Australia, a slightly different project is underway: Popgun, an Australian start-up, lets an AI learn to play the piano as a child would, by observing more experienced pianists and performing regularly, learning step by step. The ultimate ambition for the company is for the AI to be able to accompany a professional pianist live.

The AI paints… and the resulting paintings are sold at auctions.

Far from the first realistic paintings created by artificial intelligence, in 2016, an AI copied Rembrandt’s style and created a picture entitled The Next Rembrandt, which takes up the artist’s artistic codes in minute detail.

But the most impressive one occurred at the end of 2018. In October, an extraordinary auction was held at Christie’s. In between works by Andy Warhol was a new canvas, created by artificial intelligence. Estimated at between $7,000 and $10,000, this painting, entitled Edmond de Belamy, whose signature is none other than the critical mathematical formula of the algorithm in question, finally sold for $432,500.

Created by Obvious, a French collective, the AI works with the GAN (Generative Adversarial Network) method, which combines the use of two distinct algorithms. The first algorithm aims to create paintings inspired by existing works. The second focuses on the recognition of works to determine whether they are the result of a human artist or artificial intelligence. The objective is that in the long term the painting generated by the first algorithm will succeed in misleading the second algorithm. Thus, the Edmond de Belamy and Belamy family paintings could be considered as works of art in their own right by Obvious. The underlying idea is that the general public can appreciate the work.

Of course, this auction fuels the debate: can we consider a painting created by artificial intelligence as art?

We return here to the analysis developed previously: machines, and in particular AIs, indeed create, but are not able to give meaning to their achievements.

Read also
Voitto, an artificial intelligence with a heart

This beginning of 2019 marks the continuity of the integration of AIs in the art field with the sale of the installation designed by Mario Klingemann. Sold for £40,000, Memories of Passers-by 1, features two screens displaying portraits taken by an AI. The exhibited pictures are generated in real time by artificial intelligence. The big difference between the portrait of Edmond de Belamy and Mario Klingemann’s installation is that it is not one GAN system but six. The machine, therefore, integrates six times more arteries than the one developed by the French collective Obvious and was developed thanks to the analysis of many paintings dating back to the 17th, 18th and 19th centuries to encourage the AI to create original works and portraits.

The place of artificial intelligence in literature

The functioning of AIs in the field of literature is similar to that developed to encourage AIs to create music or pictures. The AI feeds on a large stream of knowledge about literature by analysing many works from one or more styles, from the great classics to works less known to the general public. Some researchers are even pushing AIs to interpret language and language variants.

It is then possible for the AI to create a work by defining several parameters: a kind, a spatiotemporal framework, characters, and so on… In 2016, Samuel R. Dowman, from Stanford University and Luke Vilnis, from the University of Massachusetts Amherst, conducted an experiment in which two sentences were given to the AI who was asked to create a poem linking sentence 1 to sentence 2. The result is surprising.

Also, in 2016, during the Japanese literary competition Nikkei Hoshi Schinichi, 11 robot authors out of the 1450 authors participating in the competition were listed. The novel entitled The Day a Computer Writes a Novel, 20% co-written by an AI, was very well received by the competition jury and was selected after the first round. The team in charge of this project started by writing the basics, the plot of the novel, before training the algorithm by providing it with a large number of sentences so that it could create the story. The only problem for the jury members was the description of the character.

The same year, on May 19, 2017, the Chinese literary market saw the arrival in bookshops of the first collection of poems written by artificial intelligence – an AI designed by Microsoft. This collection, entitled Sunshine Misses Windows, is published by Cheers Publishing, a publishing house based in Beijing, China, and includes 139 original poems created by the AI.

In 2018, Ross Goodwin conceptualised the work as the first novel written by artificial intelligence by taking the AI, camera, GPS, microphone and clock aboard a car to generate the data needed to create the book entitled 1 the Road; a special tribute to Jack Kerouac’s famous novel Sur la route.

Once again, the issue of feelings and emotional expression is raised. How can we describe a sensation we have never experienced before? This is very difficult for authors in general, especially for artificial intelligence that has no conscience. This ordeal, which is currently impossible for an AI, leads to highly factual literary creations that can be improved with the intervention of human beings – authors or other professions. Indeed, the experience of writing a literary work by an AI does not yet push writing into a sentimental or emotionally involved dimension but describes elements in a very linear way.

While many theorists believe that there is still a long way to go before AIs are able to create works – especially literary ones – as complex, detailed and emotionally involved as those produced by humans, they still see an opportunity for authors to improve their structure, the quality of their sources and the effectiveness of their stories. A study by the Future of Life Institute predicts that AIs will be able to write a best-selling book by 2050.

The arts as a whole are incredibly subjective disciplines. As a result, the legitimacy of particular music, painting or writing as an artistic creation cannot be objectively affirmed or denied. Some will consider the work in question as artistic, others not, whether it is a matter of taste or acceptance.