Marketing and advertising: 5 innovative uses of the QR code [Research]

The QR code has been around since 1994 and has expanded over the years beyond the industrial context for which it was invented. Marketing professionals have seized the possibilities offered by the QR code and have imagined multiple applications. We present below 5 different fields that have seen the innovative use of QR codes.

#1: the QR code to communicate on a large scale

In Shanghai in 2021, Cygames flew 1500 drones for a show in honor of its new game “Princess Connect: Re Dive.” At the end of the show, the drones drew a giant QR code in the sky. The spectators could then scan it and land directly on the download page of the game. This is probably the most spectacular use of a QR code ever imagined.

Watch the video below. The result is incredible.

#2: the QR code for contactless payment

The QR code is a relatively new way to pay, even if it is less futuristic than the 6 contactless payment methods analyzed here. The QR code as a payment method has very tangible advantages. The Sunday application was launched as a test by the Big Mamma restaurant group. The success has been incredible:

As a result, Sunday has become an independent company. The company is based in the United States and managed by Christine de Wendel. This French success story is worth knowing. The interview with Christine Wendel below will give you all the necessary information.

#3: the QR code to create a phygital experience

During the lockdown, the QR code proved to be an exciting ally to keep the link with the customers. Displaying QR codes in the window has allowed several brands to send customers directly to the e-commerce website.

The idea does not date from the Covid crisis.

Of course, the famous Tesco operation in the South Korean subway has been imitated many times. But we shouldn’t overshadow all the other uses of the QR code in shop windows. As you can see on the video below, as early as 2012, companies used the QR code in their windows to link to their e-commerce. At that time, it was still necessary to use a particular application to read the QR code. But for a few years, the reading of the QR code is realized utilizing the photo application of smartphones. This makes the experience even more accessible.

#4: the QR code to inform the consumer

The QR code is a simple way to make your packaging “talk.” In the age of transparency, the attentive consumer will appreciate it. Of course, we can’t hope for the heights of interactivity proposed by augmented reality as on a 19 crimes bottle; but a QR code can send the consumer to a small video to explain the product.

This is precisely what the Lactel brand has done with its “Bio and Engage” range. A QR code on the packaging is linked to a video of a farmer explaining his actions to produce better. Several videos were available depending on the QR code. You will find an example below.

#5: the QR code as an advertising resource

The QR code can allow a brand to make its advertising “interactive.” The Axa example below is quite simple but gives a good idea of the possibilities. There is a contextual element (here, the renovation of the building) that allows linking with the product or the service proposed.

However, it would be a shame to leave it at that. Technology can do better than that, as Honda proved for the launch of its new Forza. For this occasion, Honda launched an interactive digital display campaign. Thanks to facial recognition technology, the advertising message could be targeted according to the age, sex, … of the customer (see an example for GMC below). The addition of the QR code allowed the booking of an appointment in the dealership. The activation could be measured directly, which is a little the Holy Grail for advertisers. 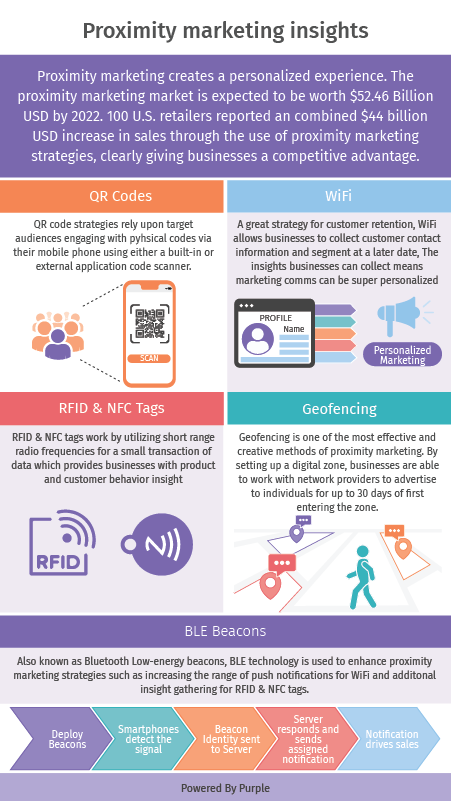