With the Covid crisis, consumers have massively opted for electronic payments over cash. Contactless payment, in particular, has benefited from a craze fueled by the fear of the virus. In addition to card payments, completely new payment methods will be democratized in the next few years and will revolutionize the way we pay for our purchases. Some of these methods are not science fiction. They have already been used for several years (facial recognition, the iris of the eye), are being tested (palm), or are in the prototype stage (subcutaneous chip).

Eventually, consumers will no longer need a physical means of payment (bank card, smartphone). Our body will become our means of payment, which raises interesting questions about protecting personal data.

Analysis: the future of payment is biometric

Contactless payment will become the norm. The Covid-19 crisis has rapidly changed usage to the point that it is difficult to imagine a future where cash is still omnipresent. This is undoubtedly great news for the fight against the underground economy.

But what will this future look like? It’s a safe bet that physical payment cards will eventually be a thing of the past. Although advances have been made in security, physical cards still have weaknesses if the card and its code have been stolen.

Biometric identification is the future of payment. First of all, it allows you to do without a physical element to pay (card, cash) and because it is exceptionally secure. No one can steal your face, your palm, or your iris. Coupled with a second authentication (such as a secret code composed on a holographic keyboard), biometric payment has only advantages.

The question remains as to which part of our body will most likely win the race to biometric payment. The table below provides an analysis of the pros and cons of each approach.

In this technology race, we believe that the future will be primarily based on facial recognition. This technology is already widely used in many daily applications. It is accepted by consumers and no longer scares them. It is also suitable for various uses (both indoor and outdoor) and is widely used in China.

We see 3 stages in the evolution of contactless payment systems:

However, there could be a hiccup in this plan: a new epidemic requiring wearing a mask. If that happens, the palm print could be the big winner.

Payment with the palm of the hand

Amazon is probably the most innovative company in the retail sector. Everyone knows Amazon Go, it’s innovation laboratory that has been testing palmprint payment since September 2020. The results were conclusive since the solution is deployed since April 2021 in 13 stores belonging to Amazon: Four Stars, Amazon Books, Whole Foods Market, etc…

Since 2017, paying with your face is a reality in China. Some supermarkets are equipped with technology that allows consumers to scan their face and link their face to a payment application (AliPay and WeChat Pay are the most used in China). Your face then extends your e-wallet and becomes a means of authenticating the payment through 80 “nodes.” Nodal points are reference points of your face (for example, the distance between your eyes) that do not change with time.

In concrete terms, you place the product(s) on a specially equipped box. The products are identified, your face is “read,” and a thumb gesture allows you to confirm the payment.

Facial recognition payment is made possible in China by the high penetration of mobile usage. With 500 million users, WeChat is a “super app” that is also a life-size laboratory to test and confirm innovations. Its ubiquity makes it possible to develop new features on a large scale. The economy of scale issues we suffer from in Europe (“will I have enough users to make my R&D costs profitable?”) don’t apply thanks to WeChat.

The confidence of the Chinese in technology, and the absence of accurate regulation on personal data, allow going very far. As early as 2017, the fast-food chain KFC partnered with Baidu to propose screens recognizing your face and recording your culinary preferences.

Iris of the eye

Paying with your eye is, surprisingly, nothing new. As far back as 2016, the United Nations High Commissioner for Refugees (UNHCR) implemented a system that allowed Syrian refugees to spend the $50 allowance paid each month. The technology is provided by IrisGuard, a British company that claims 45,000 daily transactions using its technology.

This technology is now being applied in more standard contexts, as shown by this experiment launched in 2020 in Poland. It is worth noting that the iris scanner has been integrated into the payment terminal.

In a certain number of cases, it is reasonable to think that it will still be necessary to enter a code to confirm the payment. A bit like the current double authentication (a password + a code sent by SMS), dialing a code could complement the technologies mentioned above (facial, iris, palm recognition).

In a post-Covid world obsessed with eliminating germs on surfaces in contact with the skin, interfaces like the ones below could be made available to type in one’s code for purchases above a certain amount.

Paying with your Smartwatch

In 2020 the smartphone became a contactless payment instrument like any other, mainly thanks to NFC chips.  In 2015, the Apple Watch became an extension of the iPhone for payment thanks to Apple Pay. Since then, almost all connected watches propose this functionality.

Just bring your smartwatch close to the payment terminal, and you’re done.  By downloading a specific Apple Pay token on my Apple Watch, you can even pay without having your iPhone nearby. 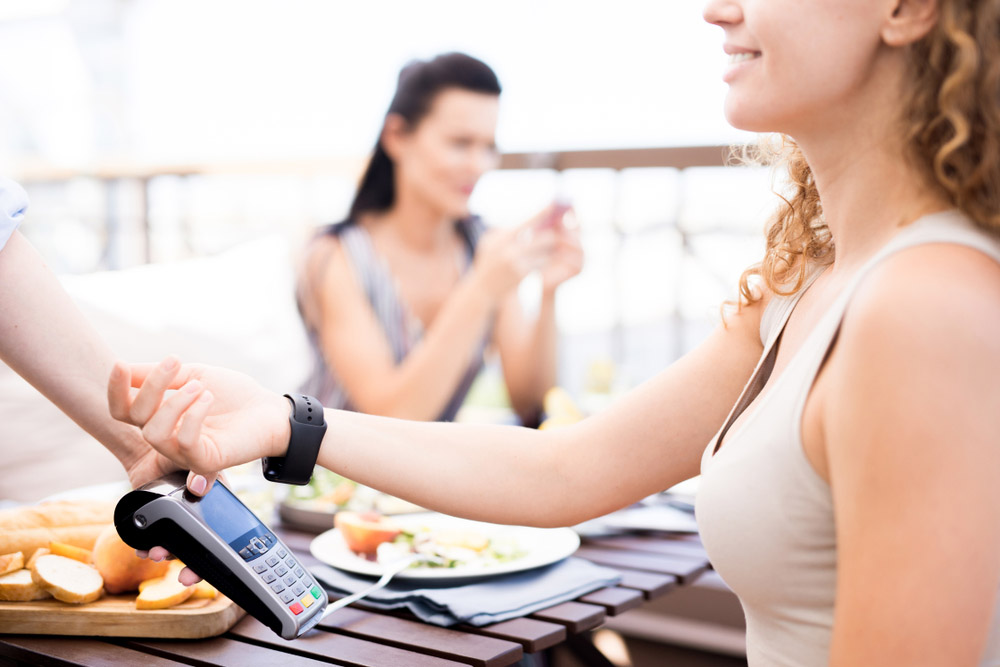 Having a chip implanted under the skin

Here is perhaps the most dystopian solution of all. It consists of implanting an NFC RFID-type chip under the skin. Incredible as it may sound, this solution was already in vogue in Sweden in 2015. A BuzzFeed journalist (see video below) had a chip implanted in 2016 and used it as a means of payment. The video was a sensation. Despite Sweden’s pioneering nature in many areas, it was estimated in 2019 that only 4,000 people had taken the step of subcutaneous implantation.