Being the market leader doesn’t necessarily mean that you dominate Google searches. For example, our research shows that in 14 European countries, the market leader is not the leader in online searches.
We also show that the French are the ones who get the most information about mobile operators, which is probably a sign of hyper-competition.

This research is the result of a study conducted in 31 European countries. It aims to understand whether the dominance in the actual cell phone market is reflected in the online world. In other words, we want to know if the distinction in the number of customers is also reflected online.
To our great surprise, this is not the case, and this may be a reflection of increased competition that pushes consumers to change operators often.

To compile this research, we applied the same method for the CBD case in Europe. Based on data provided by Eurostat and Ahrefs, we determined the monthly search volumes related to 2 types of mobile operators:

The list of operators was determined using Wikipedia and Telecompaper.

Finally, we realized this work in 31 European countries to have an overview of the trends of the cell phone market on the continent.

Number of mobile numbers per capita in Europe

The first lesson of this research concerns the number of mobile numbers in use in Europe. While the rate exceeds 1 number per inhabitant in all countries, the situation varies significantly from one country to another.

While in Norway, there is barely more than one number allocated per inhabitant (1.06), this number rises to 1.89 in Estonia. The European average is 1.35 numbers per inhabitant. There are more than 714,000,000 numbers on the continent. 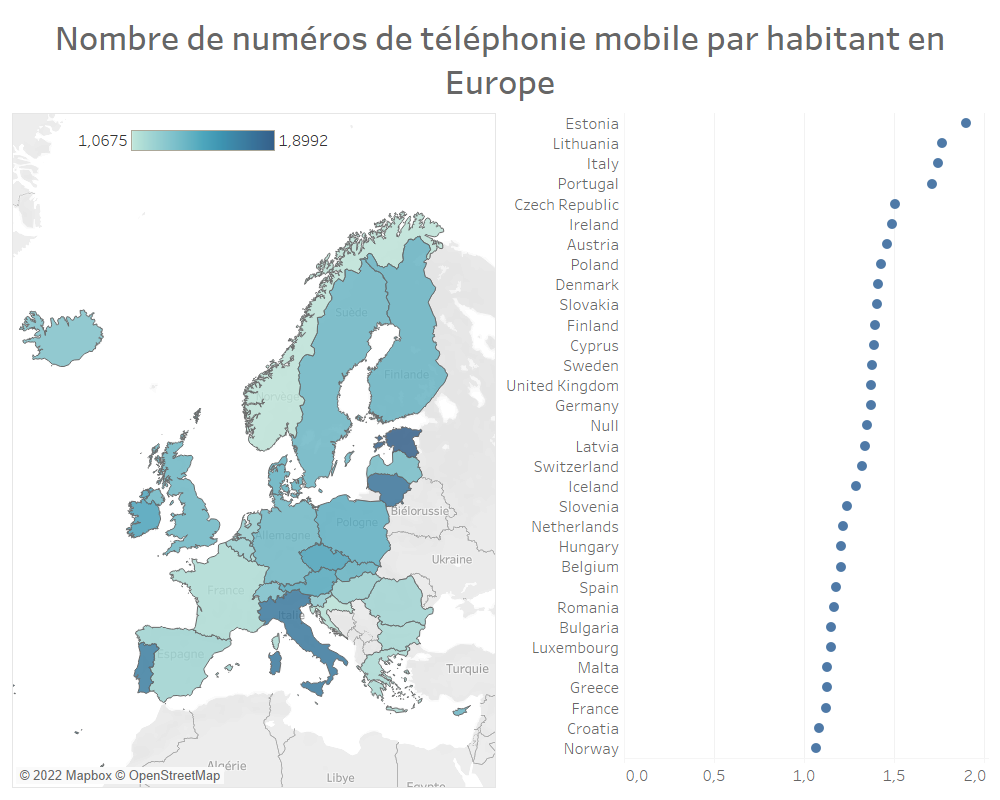 In which country do people inquire most about cell phone operators?

Every month in Europe, more than 62 million Google searches are related to mobile operators. These searches are unevenly distributed. To compare countries, we used the number of inhabitants. The results are surprising. They show considerable variations.

The table below is a TOP 10 of European countries in terms of search volumes related to MNOs: 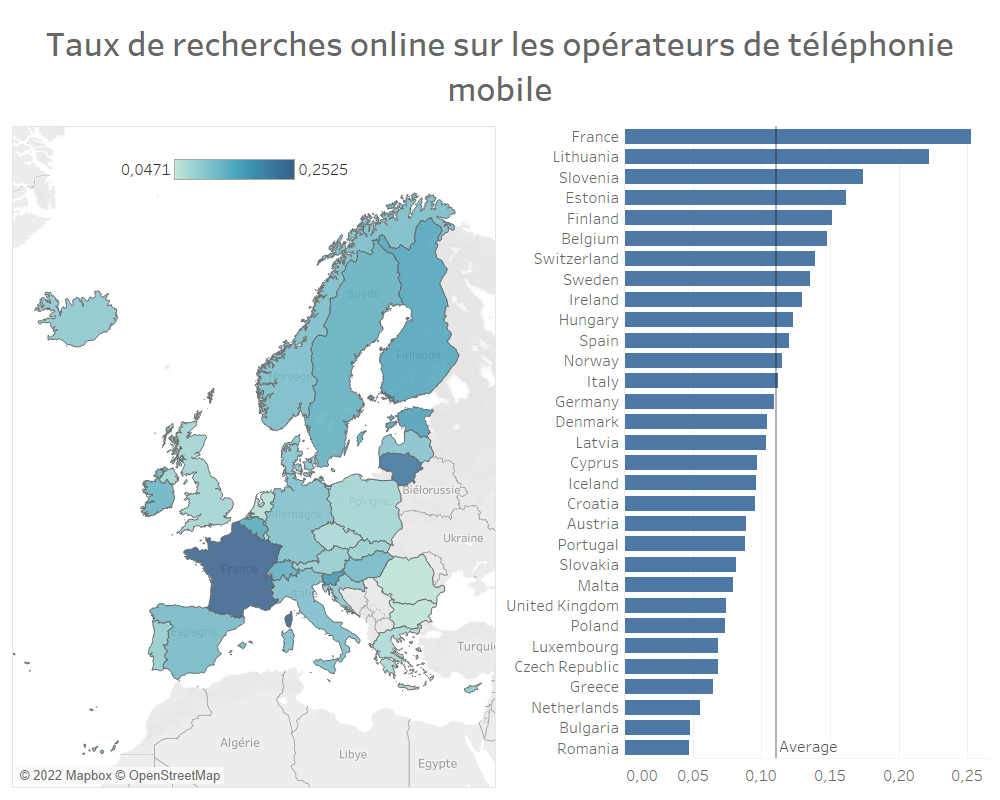 France is at the top of this ranking, with a rate of 25.3%, five times higher than Romania. The average is 11%, which would mean that 1 out of 10 inhabitants performs a search related to a mobile operator every month.

The Baltic States and The Balkan share first places with France. On the other hand, some countries such as the UK and Poland have low search volumes concerning the population.

Which mobile operators are leaders in their markets in Europe?

To assess the leadership position of a mobile operator in its country, we analyzed 2 elements:

Contrary to what one might think, being number one in terms of customers does not guarantee a first-place on Google searches. 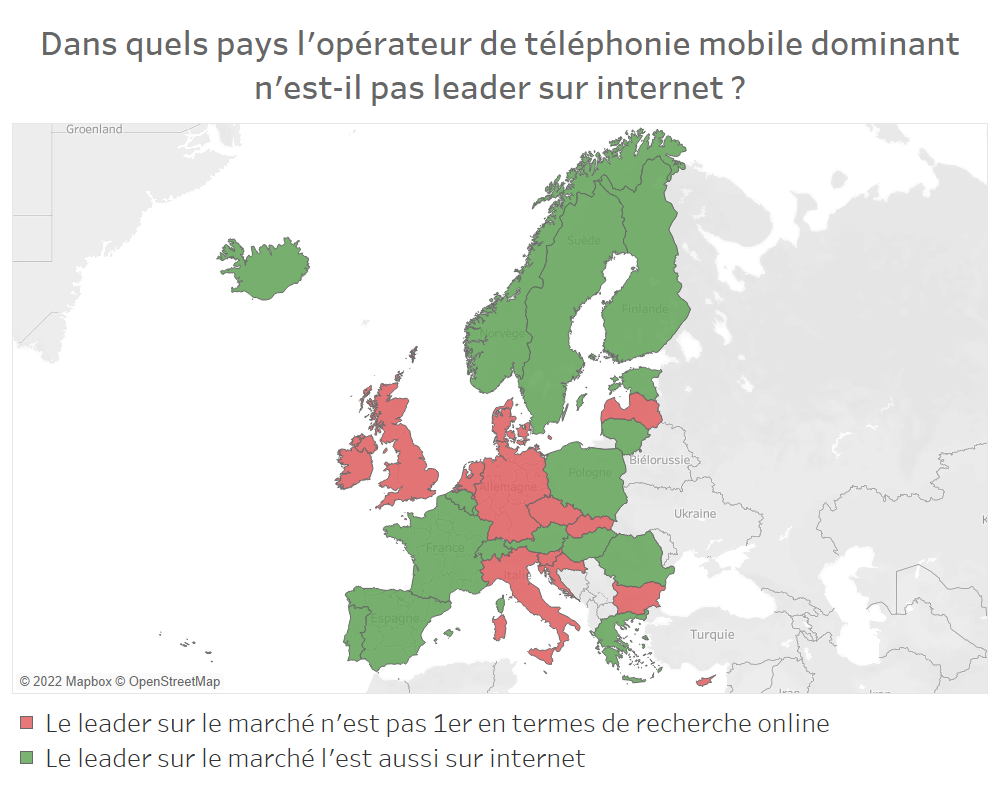 Indeed, in 14 of the 31 countries analyzed, the most searched operator on Google is not the market leader. This phenomenon occurs mainly in the countries with the lowest search volumes related to mobile operators, but not only! Germany, the UK, and Italy are three markets where non-leading operators generate the most Google searches per month.

Orange, Vodafone, Telia, Tele2, and Telemach are the only operators to dominate at least two domestic markets, which shows a well-executed internationalization strategy.

This map then asks us about the observable differences between SEO and market share. Furthermore, our data tends to show huge disparities when comparing these two variables, as shown in the table below: 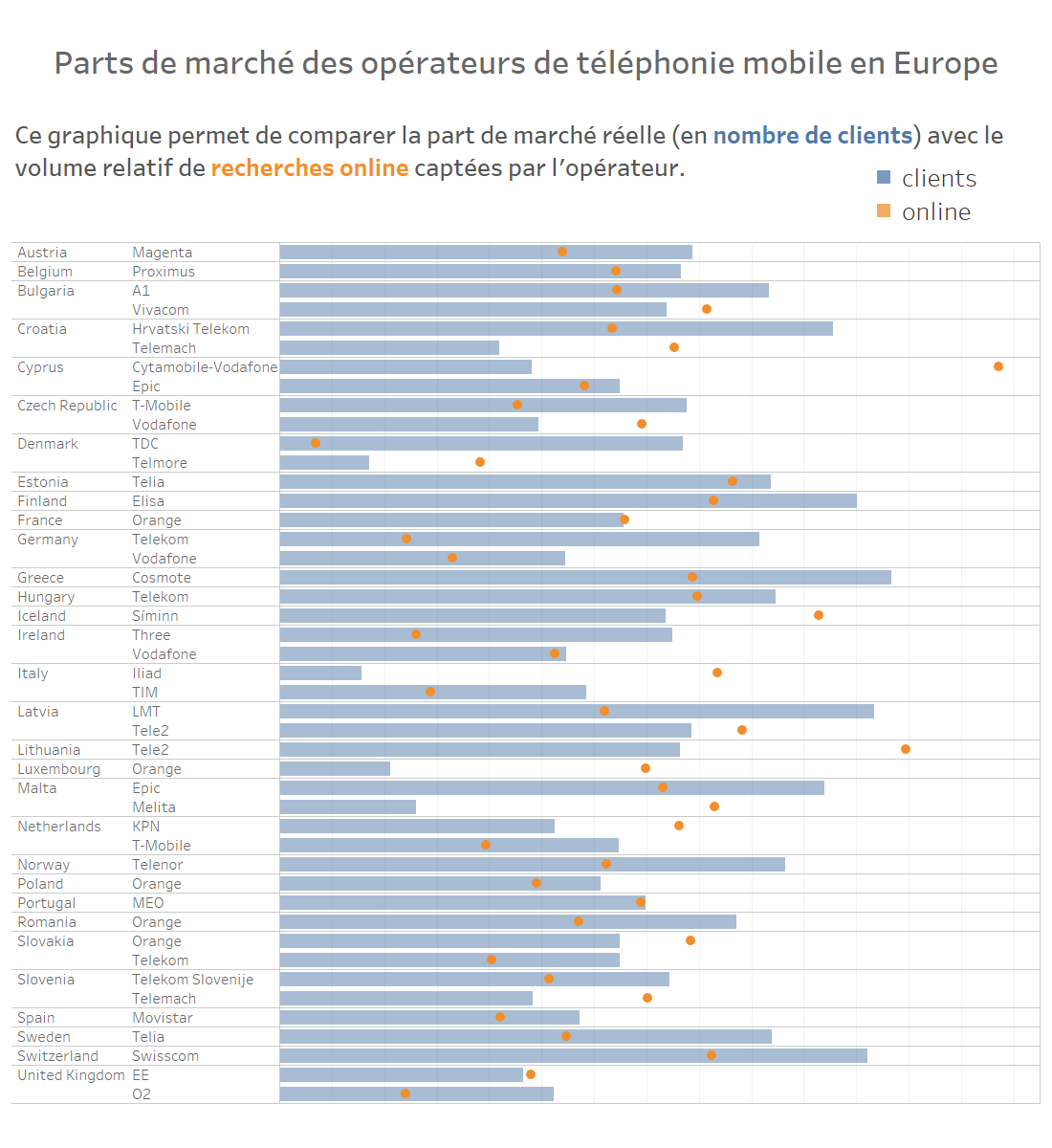 In a given country, the market leader’s share is higher than the share of the most searched operator on Google. For example, the CYTA operator in Cyprus represents 24% of MNO-related searches, a small percentage compared to Epic’s 68.6% market share.

On the other hand, Germany and Ireland are the only countries in Europe where this rule does not apply. Vodafone, the leader on Google, takes more than a quarter of the monthly searches in Germany, while Telekom, the market leader, struggles to exceed 16% of the domestic market.

In Denmark, the leader is a virtual operator!

Finally, beyond demographic and market analyses, this research is also an opportunity to observe the rise in power of virtual operators compared to traditional MNOs.

Some figures on virtual operators in Europe

For this article, we focus on the case of Denmark, a country ahead of its time. With a population of only 5.8 million, it is one of the countries with the most MVNOs globally. 21 virtual operators occupy more than a third of the Danish market!

The figurehead of this tidal wave is Telmore, the largest virtual operator in the country and the number one Google search engine in the MNO market. Indeed, it generates 116,000 monthly searches or 19.2% of the total volume of Danish MNOs.

As Denmark is not an isolated case, the future calls for more research on the popularity of virtual mobile offerings, especially in the era of 5G and the arrival of 6G on the market.