SEO research on online searches related to CBD shows that 2 countries share the first place. France and the UK have the highest number of searches per capita. The SEO research we realized in 31 countries also shows significant differences in the keywords used.

Follow us into the beautiful world of CBD online; it may surprise you!

Cannabidiol (or CBD) is a substance increasingly marketed in Europe. It is often found in the form of oil but sometimes also in candy. This popularity is reflected in the searches related to CBD done on Google.

We have researched the keywords related to CBD in 31 European countries. The results show significant differences between countries, both in terms of volumes and the nature of the searches.

CBD: most popular Google searches in the UK
(source: Ahrefs)

All the SEO data collected was taken from Ahrefs, while the demographic figures were taken from the Eurostat 2020 report. All of this was organized in a spreadsheet, and we assigned for each of the countries examined:

Statistics on the CBD market in Europe

What are the most searched CBD-related keywords by country?

The results show that “CBD” is not necessarily the most popular keyword. In most countries, the first place is occupied by a combination of keywords. In almost 1/3 of the cases, the most popular search is for CBD oil. Indeed, there are many questions about its use and the associated dangers.

Apart from oil, “CBD drops” is a search that has met with some success in the Czech Republic and Slovenia. But also, “CBD [name of the country]” comes first in Portugal. This reflects targeted searches for local sales outlets.

For example, “CBD [oil]” is searched 640000 per month in Europe, 200000 less than “CBD.” From this small gap, consumers have an intense desire to obtain information about the nature and even the purchase of a derivative product. The following map shows which aspect of CBD attracts the most curiosity of Internet users on the continent. 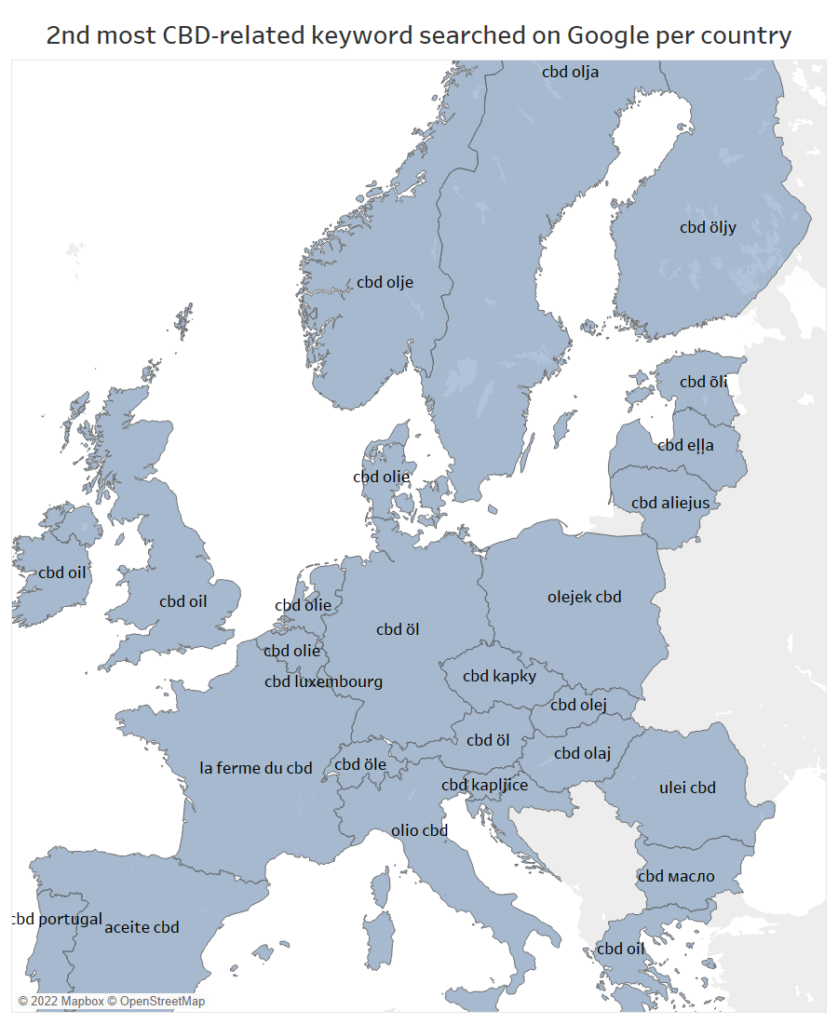 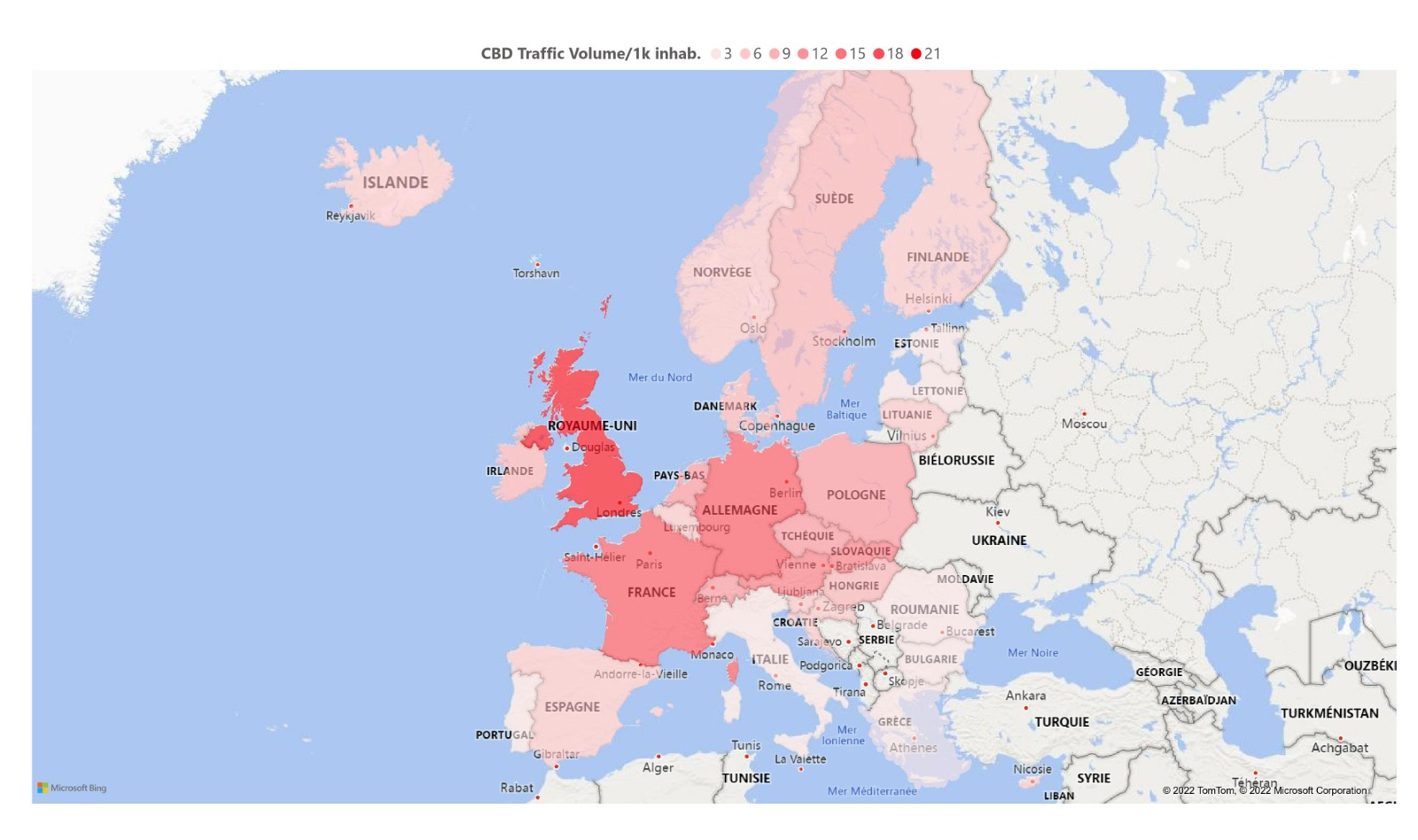 To compare the countries, we have reduced the search volumes to the number of inhabitants.
In the table below, we present the TOP 10 results related:

Thus, the United Kingdom and France are the most interested in CBD, with 1.3 million and 1.2 million monthly searches! Note that France is the country that searches the most for the single keyword “CBD” on Google, followed by Slovakia and the Czech Republic. Finally, Germany, Austria, and Poland also get a high score per capita.

Statistics on the CBD market

We have worked with “difficulty classes” to penalize KD that are too high. Despite opposed SEO realities, some countries can have a similar volume/difficulty ratio.

The following illustration shows the European portrait of the online CBD ranking according to our Volume/KD score. 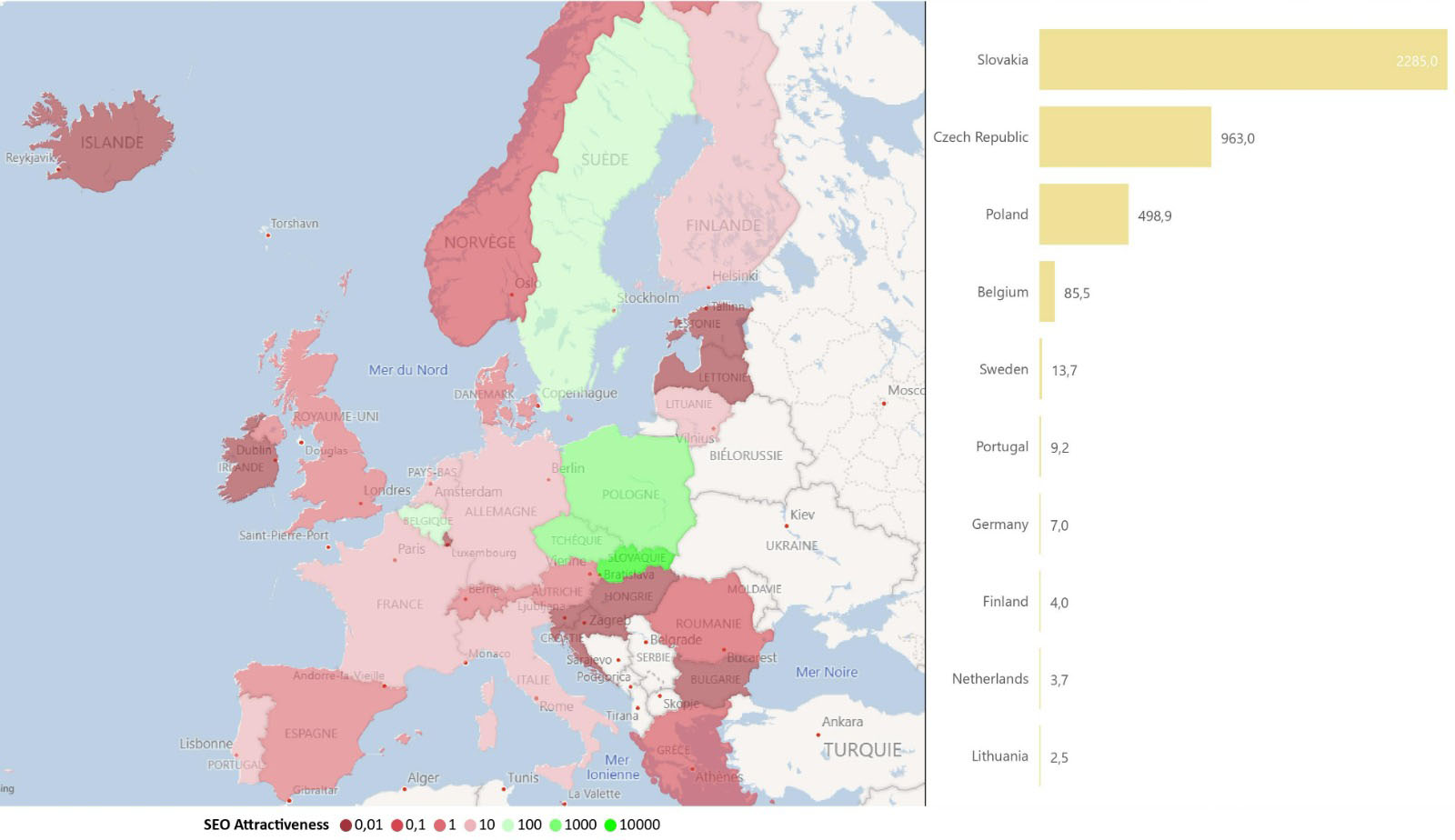 The Czech Republic, Poland, and especially Slovakia turns out to be countries with under-exploited SEO potential. Let’s take the case of Slovakia: the combinations “CBD olej” (oil in Slovak) and “CBD” accumulate more than 30,000 monthly searches, all for a very low difficulty of access to the first page of results. The reason is simple: it is the last state to have legalized CBD in Europe.

Finally, after Central Europe, it would be wise to focus your SEO efforts on Belgium, Sweden, and Portugal. These countries have achieved relatively high volume/difficulty scores compared to their neighbors: this is where the best opportunities to enter the CBD market in these parts of Europe are to be found! Note that some agencies are now purposely focusing on SEO CBD like this one.