Market research: how and why Cognac exports reached all-time high

The market for Cognac is booming. Never before have so many Cognac bottles been produced and exported. The 200-million-bottle milestone was reached for the first time this year. In today’s article we’d like to deliver you some market research insights that we compiled from different sources, including a quite unusual one: a study by French customs. The latter proves that market research can (and should) be done using sources from many different horizons.

The export of Cognac has never been so successful as in 2018. Here are a few facts :

Evolution of cognac exports since 1998 (in millions of bottles). Source : BNIC 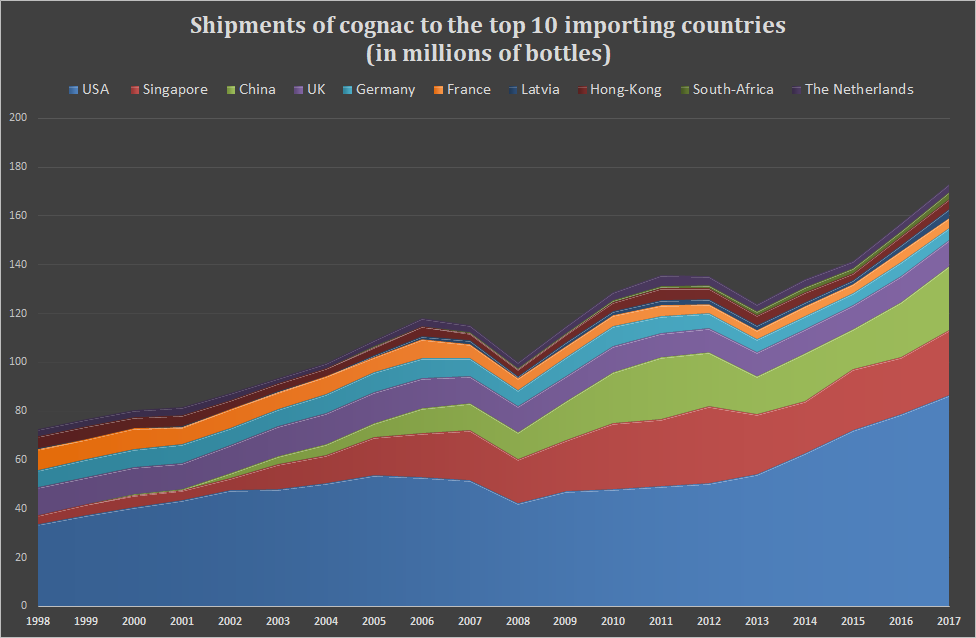 Why has Cognac become so popular?

Cognac was already very popular in Asia in the 1980’s but the asian crisis of the late 1980’s hit Cognac producers very hard. For instance exports to Japan decreased 37% between 1989 and 1994, a loss of 10 millions bottles alone for this country. In total 30 millions were “lost” between 1989 and 1994 because of the crisis.
The real growth came however from Afro-americans who, after World War II discovered cognac which became their favorite spirit, replacing Bourbon which had too much of a WASPy flavor.

US Rappers gave cognac a big boost when they started showing the spirit in their clips and even naming songs after it (“Cry, who needs sorry when there’s Hennessy ?” by Kanye West and the famous “Pass The Courvoisier” by Busta Rhymes).