Two years after the beginning of the Covid crisis, the war in Ukraine has plunged us back into a terrible climate of uncertainty. The energy crisis, coupled with a debt crisis, will lead to short- and medium-term reactions that will affect us all. We propose in this article to anticipate 6 consequences that can be expected in terms of standard of living, taxes, mobility, housing.

To keep in mind

Russian gas represents 1500 TWh. If Russian exports are stopped, it is estimated that about 500 TWh can be compensated. The missing 1000 TWh will have consequences on the producing industries. In the event of a cut-off, we would be in danger of entering a war economy. Gas rationing is entirely possible. They were applied in France during the first oil crisis and were lifted in February 1974.

The danger of similar rationing is real. It is quite possible to disconnect some households from the electricity network. In France, a law of 1990 sets the conditions of load shedding; in Belgium, it is a law of 1999 (Article 21). In China, in 2021, 20 provinces out of 32 were affected by power cuts to limit consumption and replenish stocks.

Under the dual effect of rationing and rising energy prices, Europe will likely face a wave of bankruptcies. Companies that are prone to fixed assets will be the most affected. Service companies with a lower fixed cost structure will be less affected but will suffer from this wave of bankruptcies. Their order books will be emptied as they were when the Covid crisis began.

Energy inflation takes us back to the throes of 1973 and 1979 when the two oil shocks occurred. The data from the World Bank (see graph below) clearly show the effect on GDP in 1973.

We can also see that the magnitude of the shocks on the GDP increases crisis after crisis. Therefore, the energy shock that we would risk encountering if Russia closed the gas tap would be much greater than what we experienced in 2020. I do not rule out a 10 to 20% drop in GDP in the major European countries. The UK, isolated, would probably be even more affected.

Gross domestic product (GDP) growth since the 1960s in Germany, Italy, and France

As a result, we will experience a period of forced decline, fueled by a shortage of raw materials, mainly agricultural. The latter will also be subject to climatic hazards.
Consumers will be forced to consume less. Of course, less energy consumption (heating, car travel) and less non-essential purchases.

Therefore, the valuable life of durable goods should logically increase if the goods in question do not suffer from programmed obsolescence. As an example, the average life of a washing machine is 7 years (see below the Murfy research for the replacement time of different brands of washing machines)

The replacement rate of washing machines in France

Households will postpone their investment decisions, and companies will likely do the same. Production lines will have to adapt, leading to further disruptions like those experienced during the Covid crisis (too much supply when demand tightened, shortages when demand picked up). Companies specializing in selling used goods (see our article on second-hand goods) should come out ahead.

A feeling of insecurity will develop in Europe, which will lead to increased military spending. NATO’s objectives, which most countries are not meeting (see graph below), can only be met if massive investments are made. This can only be done at the cost of increasing the debt of member states, which will further weaken their budgetary situation. 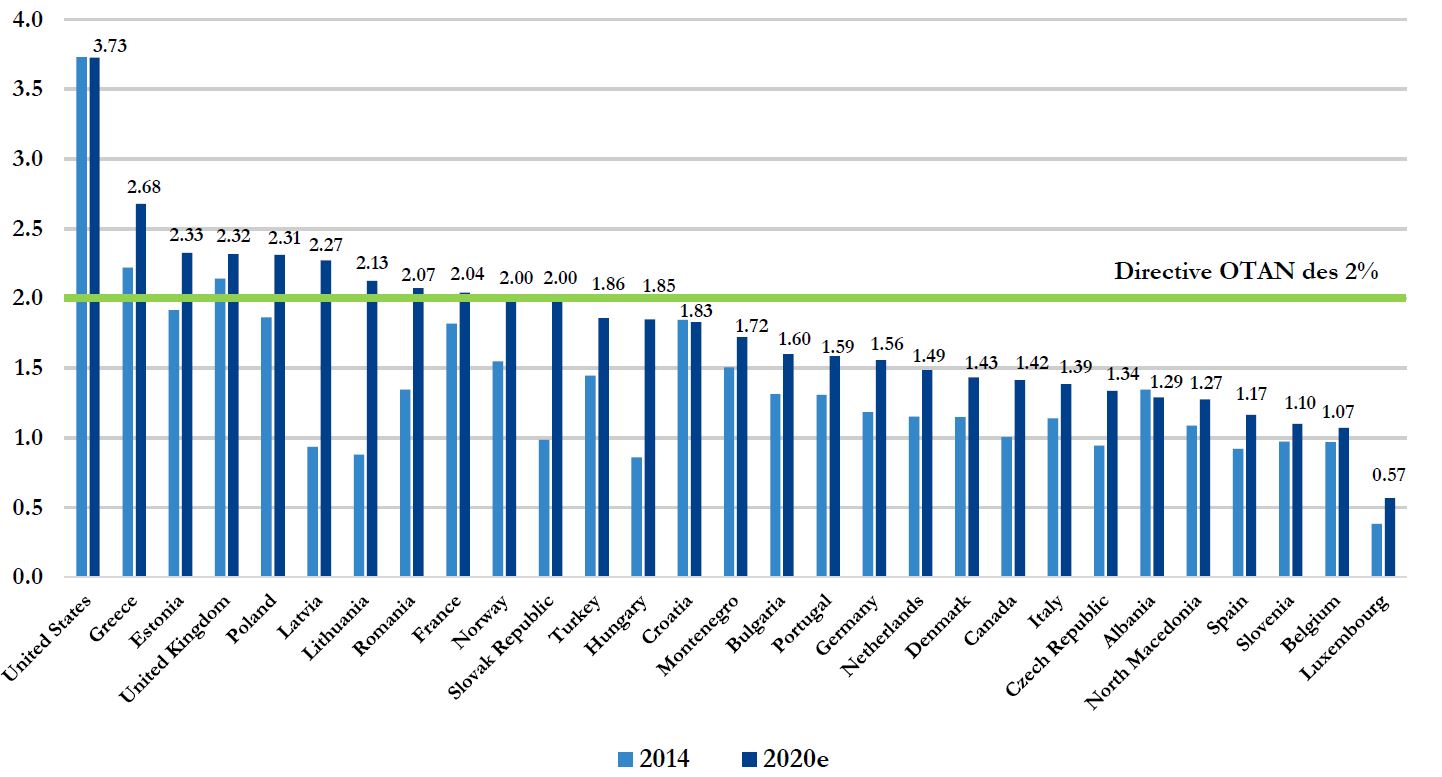 Contribution to NATO budget as a percentage of GDP

This change in military strategy has already begun. Germany has announced a €100 billion investment plan, Denmark has decided to rearm, and France will increase its military investments.

After an initial surge of generosity fueled by geographical and cultural proximity, the reception of Ukrainian refugees will worry public opinion. This reception will put additional pressure on public finances, a force that is difficult to bear for states that are already stretched to the limit.

Only the debt will be able to meet the needs in the short term. But the debt has already reached excessive levels. The Covid effect is visible in the graph below (source: IMF). 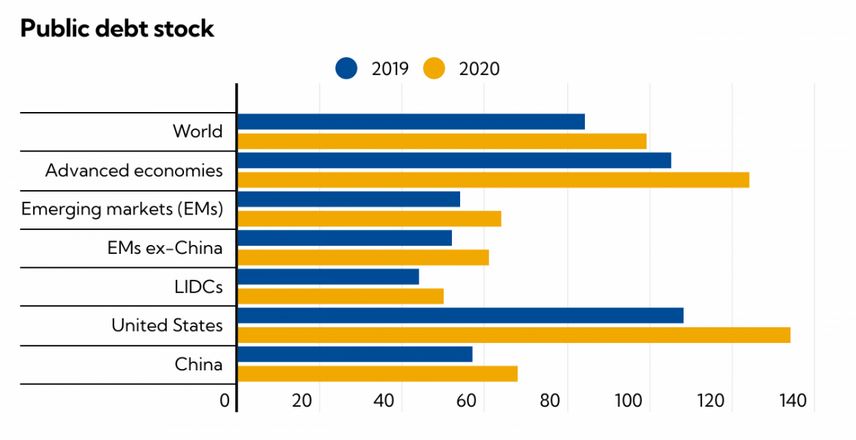 First of all, we can see in the graph below from the FED website that the previous economic recovery (post-Covid) was particularly short. While recovery cycles have lasted on average 10 years, we see that the post-Covid cycle has been concise (less than 2 years) and weak. There is also a dip towards the 0 thresholds, leading to a recession within 6 to 18 months. We also note that the effect of debt is becoming shorter and less powerful.

Another analysis of changes in the FED’s balance sheet (source) sheds light on the effect of the stimulus plans. The fiscal effort made in 2020 is far greater than in 2008 but with a more negligible impact. This undoubtedly points to a loss of control by central banks, which can no longer have a lasting and significant influence on economic cycles through liquidity injections.

Changes in the FED’s balance sheet

In the context of the energy crisis, the effects will be particularly noticeable on two levels:

Living in the countryside will become a luxury in “4-front” houses. The energy-intensive post-war housing stock will become a gaping wound for rural people whose incomes are already lower than those of urban people.

Lack of connectivity in rural areas will also be a problem because of the fuel price. It will be increasingly expensive to get out of isolation by car.

Living in the countryside will become a luxury in “4-front” houses.

The most modest households, which in 2020 spent about 15% of their budget on energy, will see this share increase to 25-30%. They will be doubly strangled. On the one hand, they will fall into energy insecurity; on the other hand, they will neither have the means to make the necessary investments to reduce their energy consumption (insulation, heat pumps, photovoltaic panels) nor will they be able to move closer to the cities and their pool of jobs.

As if this were not enough, we can also anticipate a decrease in the value of older, more energy-intensive housing. Newer homes will be rarer, and their price per square meter will increase.

This should end the desire of urban dwellers to move to the countryside. This migration, which was announced at Covid, was only temporary.

Fiscal imbalances can only increase in light of current events. The advanced economies (Europe, United States, etc.) will try to solve an equation that now contains too many unknowns. The unsustainable budgetary trajectories will require these countries to question their very fundamentals. In Europe, in particular, the sacrosanct principle of the welfare state will be called into question.

State intervention will have to be reduced, and the levels of taxation, already unbearable, will be further increased. Governments will be very imaginative in creating new taxes and eliminating the remaining tax loopholes.

The financial pressure will therefore increase on all levels of society. The poorest households will, of course, be the hardest hit. The combination of events and budgetary decisions will lead to impoverishment for them. Social protest will be inevitable.