It is well known that Ryanair is synonymous with low cost in the minds of consumers. Its advertising motto could be “Say good, say bad, as long as you talk about me.” With a communication budget reduced to the minimum, Ryanair has been very inventive these last years to make people talk about it, most of the time with controversial stunts. Let’s look at 5 examples of Ryanair’s PR stunts, among the most shocking of the last few years.

First PR stunt: the hoax of paying to use the toilets

Ryanair has not only used its low prices to make itself known. Indeed, the airline has quickly adopted a bold attitude in its communication strategy. In 2009, the CEO amused himself by making the press believe that his company would charge for using the toilets on its planes. And Michael O’Leary is a real expert in low-cost communication.

Only a few days later, he admitted the deception. 13 years ago, the airline’s general manager made his first big move. Ryanair’s entire communication department will continue this tradition until today.

O’Leary will ironically say about paying for using the toilets: “a new visionary strategy and a wonderful idea.”

In 2011, the celebrity press published many prints on the natural needs of Gérard Depardieu. The affair took place at a competing airline, so it was an opportunity not to be missed for Ryanair. This time, the PR stunt is based on a play on words: “pissing on the competition.”

Like the actor, the company relieves its customers by reminding them of its low prices. Moreover, we note that the company’s pricing strategy has remained the same for years now. Its main competitive advantage is indeed to be accessible to all financially! 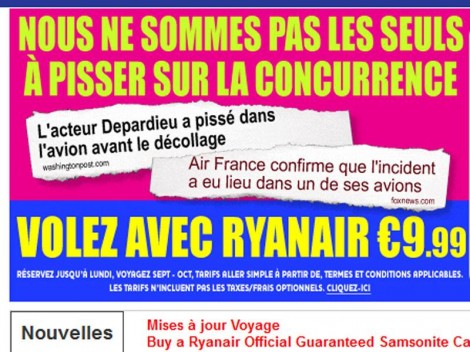 Ryanair opts for an aggressive communication towards its competitors.
Example n°3

Ryanair's goal: to distinguish itself "at all costs"

The British advertising regulator is used to receiving reports of PR stunts by Ryanair. In this respect, it is one of the most problematic companies in the UK. In 2012, a Ryanair advert denigrating Thomas Cook, and predicting its imminent bankruptcy, was banned in the UK. We can then legitimately wonder about the following: 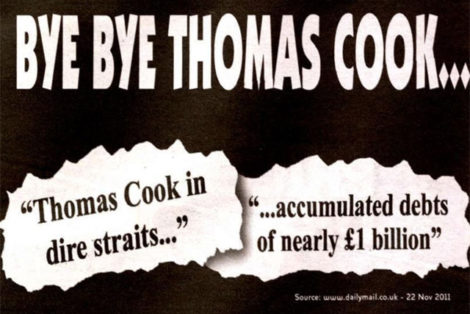 Ryanair is used to provocative PR stunts. The low-cost airline’s Twitter account was the scene of several PR stunts during the November 2020 US elections. Some of the tweets were quite… inappropriate. Judge for yourself.

First, on November 5, 2021, Ryanair’s Twitter account let slip a tweet that could be described as politically incorrect. It shows a screenshot of Eric Trump, son and trusted advisor to the current US president, at what looks like a rally. The commentary predicts the defeat of the Trump camp and a return to using commercial lines instead of Air Force One. Of course, this is without counting on Donald Trump Senior’s private planes. 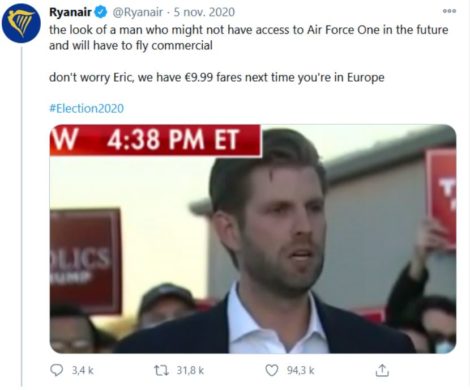 Finally, in this other tweet, the Ryanair community manager openly mocks the predictions made by Trump Junior on the outcome of the vote. 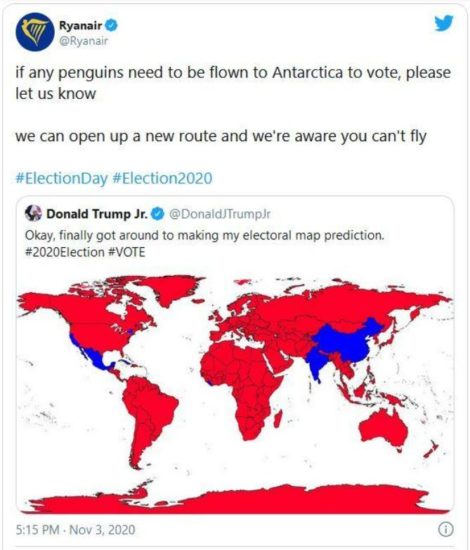 Covid-19 or not, Ryanair goes for its PR stunts

On the official account of Ryanair, we find an example of community management with a rather daring timing. In the middle of the pandemic and the Partygate scandal, Ryanair makes a joke to relax the atmosphere. The company has fun comparing the sanitary protocols to the “festive protocols” of 10 Downing Street. The comment is even quite vulgar in some passages of the tweet in question. We will end this list of PR stunts with this tweet from December 13, 2021.

In short, social networks are a godsend for Ryanair and its way of communicating. Indeed, their provocative, vulgar, offbeat tone finds its audience on Twitter, for example. In November 2022, more than 670 000 accounts subscribed to the company’s page! 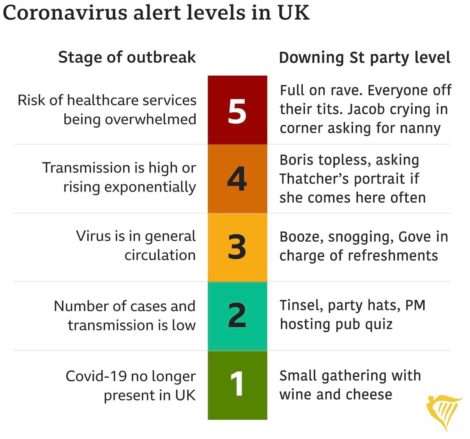