Understanding the nudge theory and nudge marketing requires answering a fundamental question: what predicts a particular behavior? A specific behavior is the result of an intention and an opportunity. Many obstacles can hinder this behavior, including willingness.

This is where nudges come in since they allow us to encourage the behavior by “directing” it. Some people speak of “manipulation,” but we would talk of directed exploitation of the rules of functioning of the human brain.

Nudge marketing uses the brain’s reflexes for marketing purposes, intending to direct behavior in a direction that is beneficial to the company.

The origin of nudge marketing

The term “nudge” has recently been popularized. Some claim that it first appeared in 2008 in the eponymous book by Cass Sunstein and Richard Thaler. This is not true. The term “nudge” has been used in a social marketing context long before 2008, for example, in this 2003 article about changing behavior to achieve environmental goals.

However, the resulting concept of “nudge marketing” seems more recent. Google search trends show that it has been only since 2014 that this term starts to be searched, mainly in France.

Although the term’s origin cannot be traced, Sunstein and Thaler’s book was probably a wake-up call for marketers. They realized that nudges could be consciously used to “steer” behavior in the desired direction.

Therefore, the nudge is the exploitation of a human reflex, deeply rooted in the functioning of the human brain. Nudge marketing uses these reflexes for marketing purposes to direct behavior in a direction that is beneficial to the company.

Nudges: 5 examples to explain how they work

What better than a few examples to explain what a nudge is? Here are 5 examples of nudges in the field of everyday life. In each case, the nudging technique implemented has allowed modifying human behavior positively.

The story of the Amsterdam toilet is probably the one most associated with the nudges theory. We have discussed it in-depth in this article. To summarize, printing a small fly at the bottom of the urinals at Schiphol airport (Amsterdam) has considerably reduced cleaning costs. The men are instinctively driven to “aim” at this fly, limiting the amount of soiling outside the urinal.

The musical stairs in Copenhagen were initially a social experiment. These musical staircases motivated subway users not to take the escalators. Here, the “fun” aspect of the experience encourages users to change their behavior. It is, therefore, a nudge to promote individual movement and health.

We have already introduced you to the Icelandic project of 3D crosswalks on this blog. This is also a nudge. The appearance of this crosswalk produces an instinctive reaction in the driver that leads him to brake. This is precisely the response sought when approaching a crosswalk.

The issue of organ donation is discussed in the book by Sunstein and Thaler. They explain that nudge consists in allowing organ removal by default rather than by choice. We thus go from an opt-in to an opt-out, which considerably increases the possibilities of organ harvesting after death. Whereas individuals had to express their consent to be retrieved, it is necessary to express their refusal. The human being is a supporter of the least effort; it is thus the first option that is privileged.

It should be noted that this shift from opt-in to opt-out is also the strategy that the European Commission adopted in the development of the GDPR.

In times of crisis, saving money of all kinds becomes a priority. The theory of nudges can be applied at many levels to reduce consumption and promote frugality at all levels. As in the previous example, all that is needed is to switch from an opt-in to an opt-out. The options chosen in the default situation must be those that promote rational consumption.

This principle can be applied in all aspects of everyday life:

To illustrate the use of the nudges theory in marketing, we offer you some concrete and explained examples.

1) The dark patterns: the nudges that work against your interest

Dark patterns are user experiences that are deliberately poorly designed to prevent the user from making the right choices. In most cases, the cognitive load is too high; the user will opt for the option proposed by the provider, which will not be the most advantageous one. We can, therefore, also talk about “nudge” since the user’s brain will automatically look for the simplest solution.

This site offers 12 categories of “dark patterns.” Our favorite? Hiding costs. Stronger than price engineering that prevents consumers from comparing prices is AWS. Amazon’s cloud arm has made a speciality of producing unintelligible invoices that avoid any verification. And when it all goes wrong, you’re left with tens of thousands of dollars in uncontrolled invoices within 24 hours. Since AWS’s profits are measured by the computing power they provide you, they are not interested in making it easier for you to prevent overbilling.

Another example is subscription-based software licenses. Since software companies realized that it was more profitable to sell subscriptions than perpetual licenses, their revenues have exploded (and the bills you pay with them). Publishers, however, go to great lengths to hide them and prevent users from finding them. Yet, there are still alternatives in the form of perpetual licenses in many cases.

We have talked extensively on this blog about filter bubbles. This theory says that recommendation algorithms progressively lock users into their beliefs, preventing them from discovering new content. Scientists have taken up this issue, trying to promote the discovery of new content. But the facts are stubborn, and studies tend to prove that filter bubbles do not exist. Nevertheless, they represent an interesting case of marketing nudge.

Algorithms can indeed be “manipulated,” i.e., rules can be programmed that guide the functioning of the algorithms. These “business rules” then lead the algorithms to favor specific contents over others and seek, thanks to machine learning, to maximize the desired result.

Who hasn’t been tempted by the smell of fresh croissants in a bakery? Sensory marketing uses all techniques that aim to use our senses to provoke a purchase. The olfactory sense is one of them. It is perhaps one of the easiest to implement. Synthetic fragrances are available for many contexts. Butter scents can be artificially created and diffused near the point of sale. The video below is an excellent example of what is done in supermarkets.

Data is the oil of the 21st century. So when in 2018, the GDPR came into effect, site publishers and data resellers (the “brokers”) were afraid that their livelihoods would be taken away. Nudging techniques were put in place to obtain consent quickly. 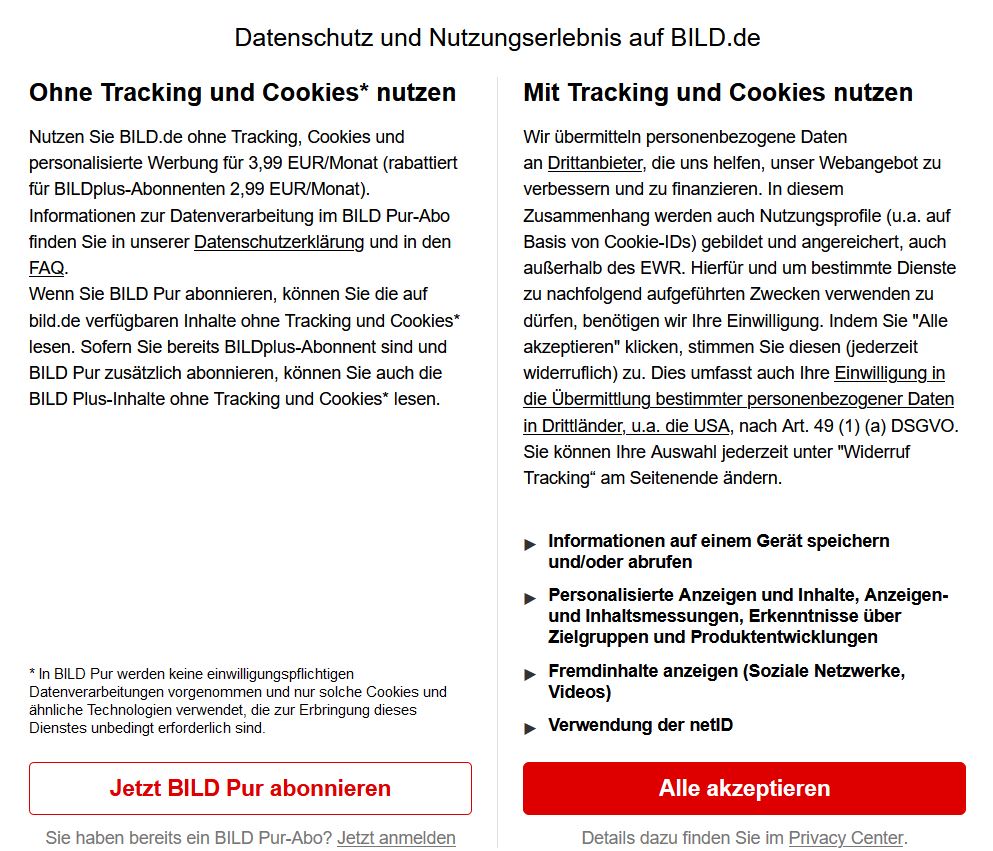 The example above comes from the magazine Bild in Germany. It is a perfect illustration of a widespread technique that aims to guide the user’s choice. First, the button to accept all cookies is on the right, and then it is in red to attract attention. It is also worth noting that the size of the popup is another typical marketing nudge used to force consent. The bigger the popup, the more annoying it is, and the faster the user will want to eliminate this annoyance. Combining these constraints constitutes a powerful nudge marketing technique to collect user data.

Nudges are frequently used to influence the choice of a subscription package. The example below comes from the famous Harvard Business Review.
You will notice that there are only 3 subscription packages, which reduces the cognitive load and limits hesitation. Then it would help if you looked at the price differences and the calculation method (annual price per month). The middle option offers more for a minimal difference. This is the one that the publisher wants to “push” and towards which he wants to orient the choice of the visitors unconsciously.

The nudge is even more apparent in the example below. The price difference with the middle option has completely disappeared. The consumer has the impression that the paper magazine is offered to him.

The next time you go to a restaurant, be careful. If the menu is displayed at the entrance, it may be designed to promote the sale of the most profitable products. Eye-tracking studies show that a consumer quickly “scans” the menu and that their attention is mainly focused on the upper left and lower right corners. This is where you should place your most profitable products if you want to push them.