Home » Misc. » Following in the footsteps of Lorenzo Lotto in the Marche region (Italy)

In some regions, it is still possible to make significant artistic discoveries off the beaten track. This is the case of the Marche region in Italy, whose cultural heritage is intertwined with the history of the Vatican. Lorenzo Lotto awaits you there.

The Marche is an ideal hunting ground for lovers of ancient art. After taking you on the trail of Carlo Crivelli in 2019, this year we are going to search for Lorenzo Lotto in the Marche. A stunning retrospective took place in 2018-2019 which mobilised the various localities where Lotto’s passage is still visible. An excellent website is still accessible. 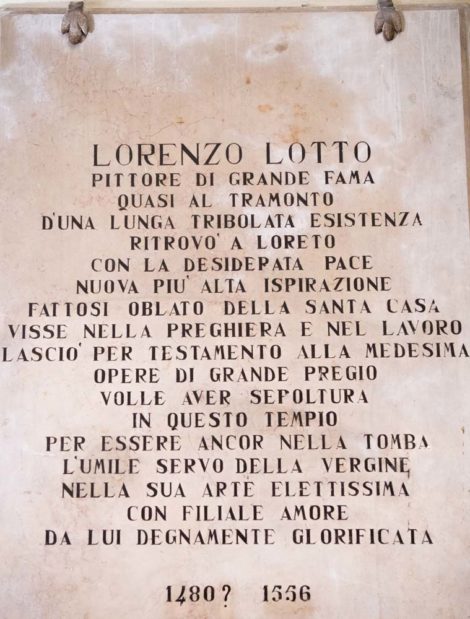 Commemorative plaque for the death of Lorenzo Lotto in 1556 in Loreto. The plaque is located in the Basilica of Loreto.

Lorenzo Lotto (1480-1556) was trained in Venice by Giovanni Bellini or Alvise Vivarini. Like his contemporaries, he was forced to “go into exile” in search of patronage and commissions. His first stop was Treviso (1503-1506). He made his first stay in the Marches from 1506 to 1508, before returning to Rome until 1510 at the call of Bramante (the Pope’s architect). He is said to have worked with the young Raphael in the Pope’s chambers. From 1511 he returned to the Marches (to Jesi) and left in 1513 to settle for more than a decade in Bergamo. He returned to Venice from 1525 to 1532 and then made numerous trips to the Veneto and Marche regions. In 1549 he returned definitively to the Marches (in Loreto) where he was buried.

In the following paragraphs, I have chosen to present the different places I visited in the summer of 2020 to understand Lorenzo Lotto’s work. I have decided to follow a chronological order that follows Lotto’s passage through the locality in question or the date on which the work was finalised.

Recanati is the second stage of the wanderings of Lorenzo Lotto after he departs from Venice. He goes for the first time to the Marches to execute an altarpiece for the church of St. Dominic (1508). The art of the young Lotto is already at its technical peak, even if the influence of his Venetian masters still marks the artistry. It is the remarkable altarpiece of St. Dominic’s that can be seen in the Museum of Recanati. Its exceptional quality inspires me to come and see it every summer. One cannot get tired of the infinite meticulousness shown by Lotto nor of the very Venetian mastery of colours. Moreover, how can one fail to recognise Bellini’s lesson in the presence of the mosaics (in the niches behind the figures depicted in the lower panels) and the quality of the figures in the upper panels? 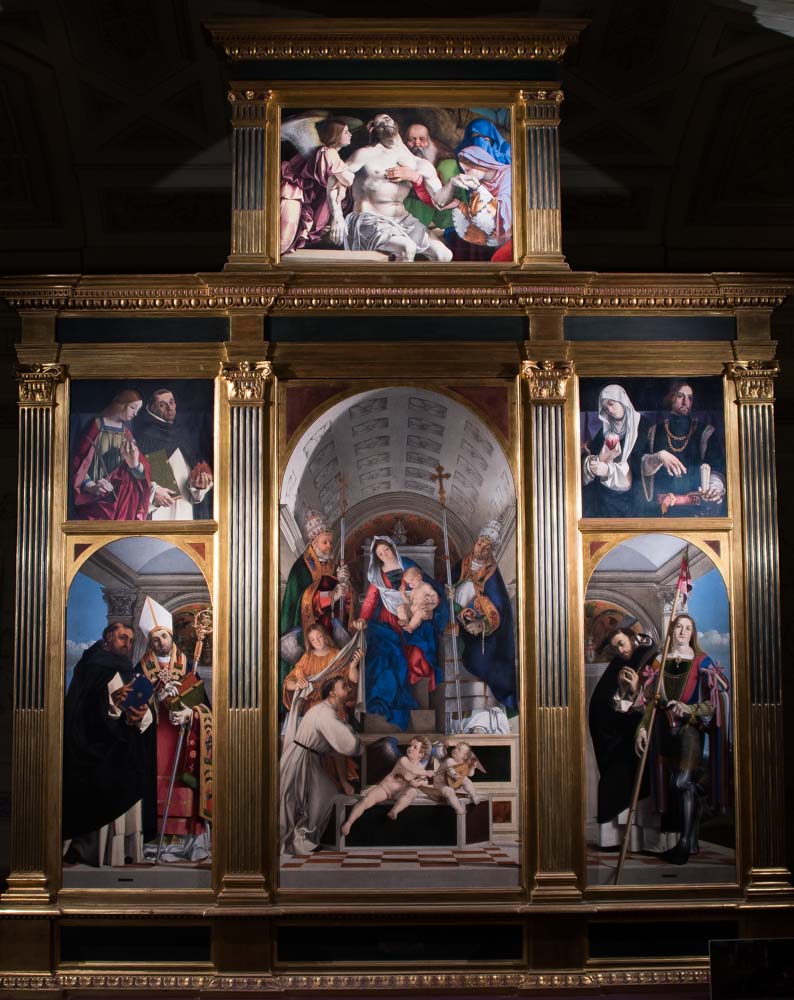 Altarpiece of Recanati by Lorenzo Lotto (1508). It is one of his early works painted during his first stay in the Marche region.
Collection: Villa Colloredo Mels, Recanati, Marche, Italy

The Villa Colloredo Mels Museum in Recanati (regrettably seldom visited but incredibly interesting) contains other treasures of Lotto. First of all, two paintings dating from his second stay in the Marches (see Lotto in Jesi): a monumental transfiguration and a pilgrim Saint John, a copy of which can be seen in the Church of Saint Anne in the centre of the village. The other visible work, a major one, is the Annunciation of 1529, which shows a virgin frightened by the arrival of the angel and a fleeing cat that Balthus would not have disowned. For a long time, I found it challenging to appreciate this painting whose plastic qualities escaped me. I must admit that the handling of the subject is incredibly disruptive for the time. It is, therefore, this innovation that sets this painting apart in Lotto’s production. It is difficult to grasp the significance of this innovation. Still, one can imagine that 500 years ago, it must have been incredibly difficult to depart from the “canons” of Sacred Art. Lotto was able to escape from this straitjacket to produce a more personal work that heralded Mannerism. 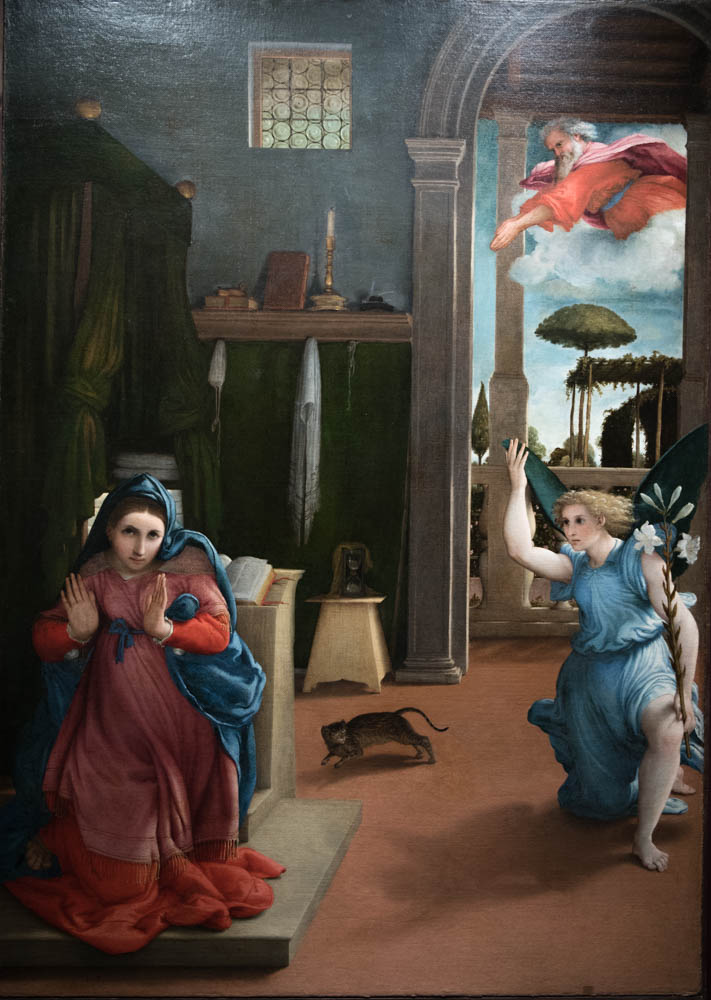 The Annunciation by Lorenzo Lotto (1529), one of the most unusual works by the painter. The novelty of the representation makes it a striking pictorial innovation.
Collection: Villa Colloredo Mels Museum of Recanati

Jesi is the town that marks Lotto’s return to the Marches in 1511. A return that would be short-lived since he would leave again in 1513 for Bergamo. His return to the region is documented by a contract of 18 October 1511 for the making of a Deposition. This painting can now be seen at the Pinacoteca of Jesi together with other works by Lotto. The freshness of the colours is still remarkable and the composition, although rich, remains very legible. In terms of the Deposition (the cross is visible in the background), it is instead a deposition of a tomb. One cannot fail to notice the shroud held between his teeth by Joseph of Arimathea, and one cannot fail to remember the burial of Rubens where this iconographic element is taken up again. 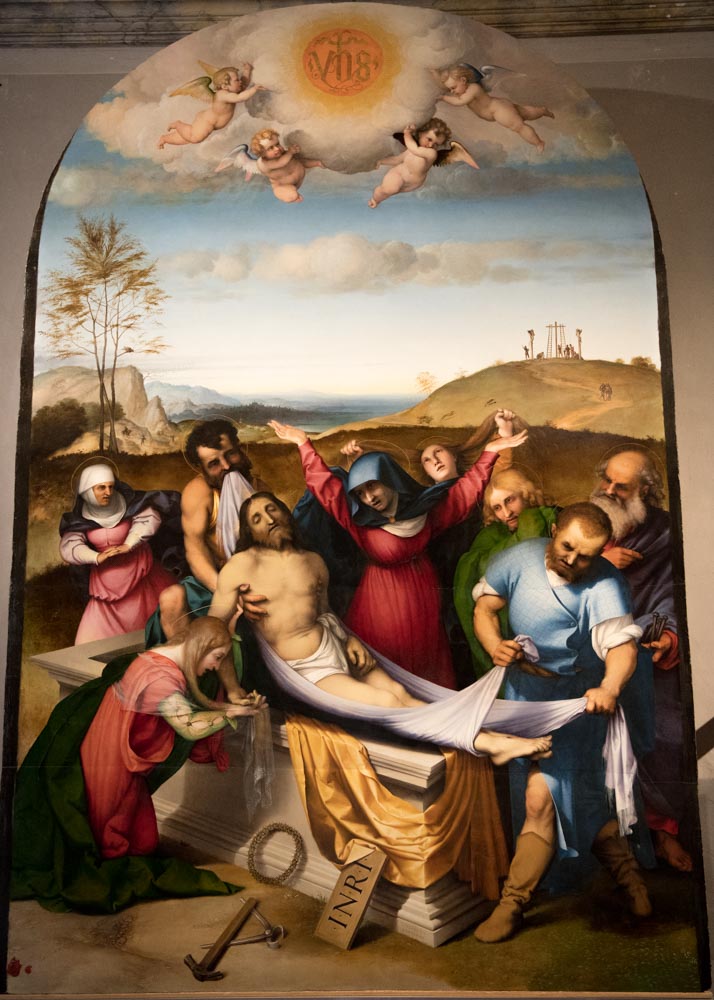 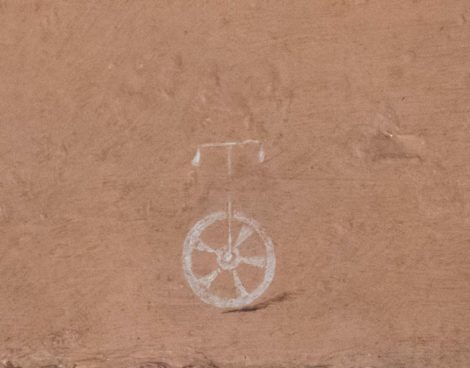 This little wheel is the sign that Lorenzo Lotto placed on the pedestal and on the painting to indicate in which direction the work should be read.

Among the other works in the Pinacoteca, of Jesi is the “Legend of Saint Lucia”, whose scenes are arranged uniquely. The reading of this painting begins in the predella, continues in the main painting and ends in the predella. Lotto has invented a unique way of showing the viewer the order of the scenes. He placed “wheels” on each scene to indicate the direction of reading.

The Deposition and the legend of Saint Lucia are certainly the most beautiful paintings visible at Jesi. The Madonna of the Roses (Madonna Delle Rose) is a later work (1526) where the Venetian influence is visible. The Visitation of 1531 is more challenging to read (because it was not well restored), and of the Annunciation (1526) only two side panels remain. 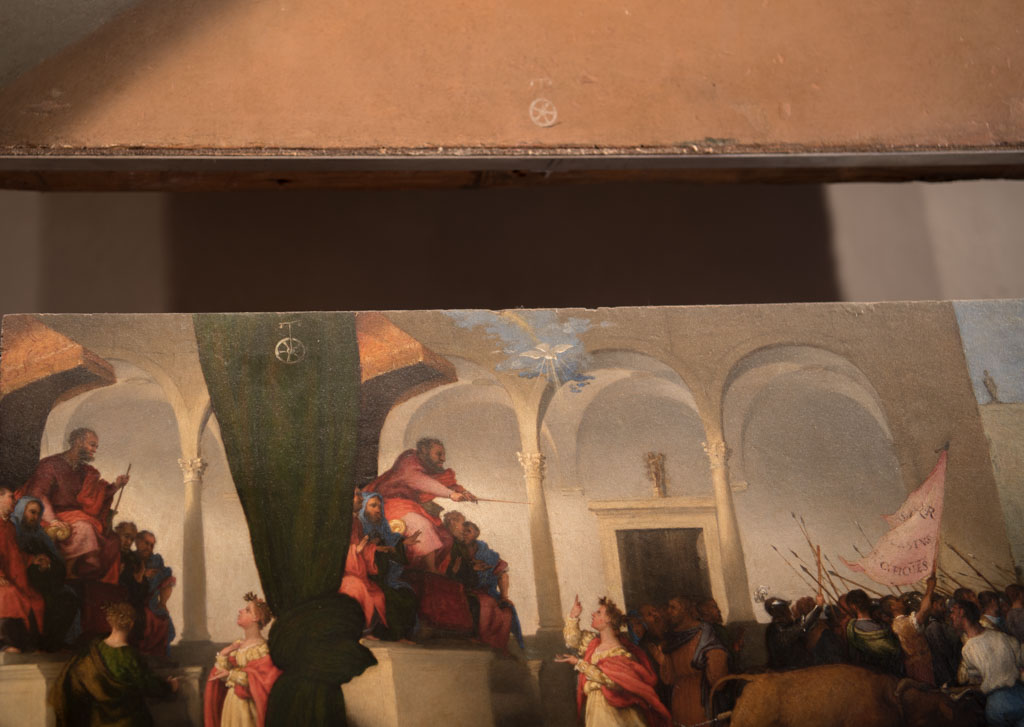 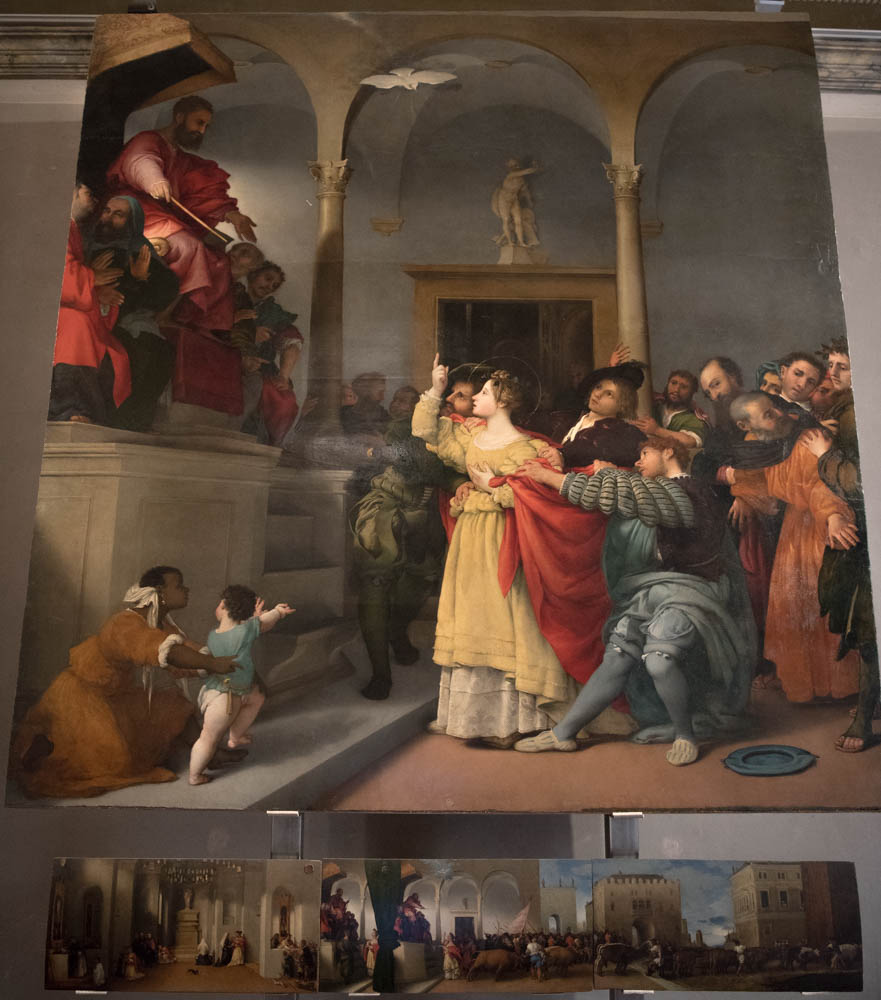 Who would have guessed that in this large town of 7500 inhabitants, a masterpiece is hidden in a tiny church? It was for the small church of Santa Maria Della Pietà in Telusiano that Lotto painted in 1529 a crucifixion that occupies the entire wall of the nave. A work so monumental that one could think of the church built around it. 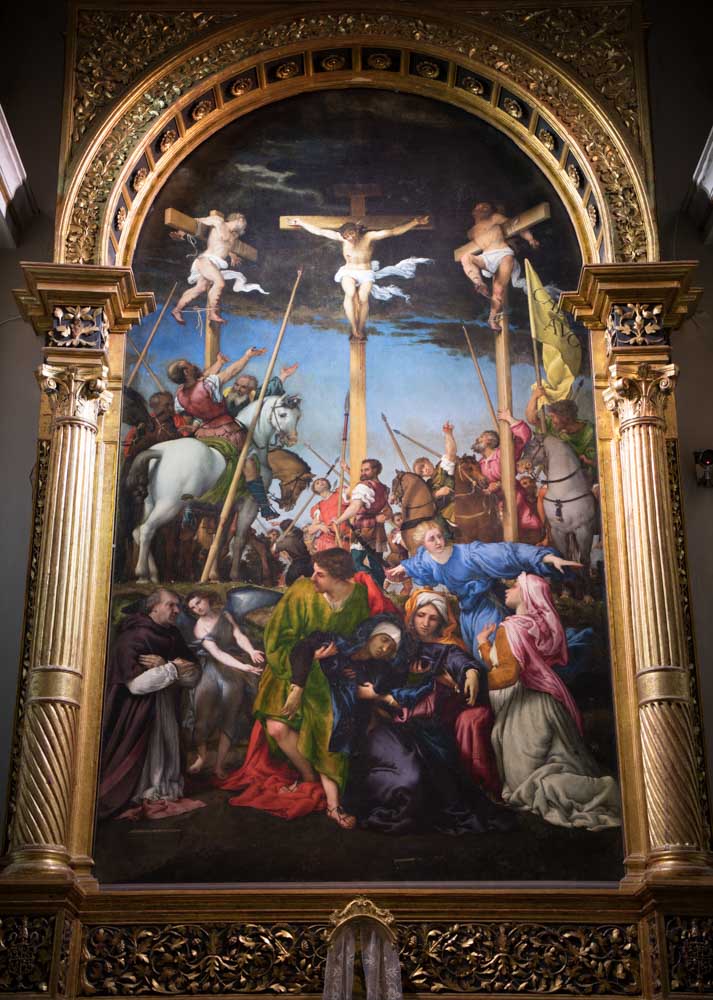 You will be alone during your visit, and the church is quite dark. You will need a 2€ coin to illuminate the painting. The spectacle is striking. The colours of the altarpiece seem to breathe new energy into the church.

Lorenzo Lotto in Cingoli (“The Madonna of the Rosary”)

The theme of the Madonna of the Rosary became famous after the Battle of Lepanto. The victory of 7th October 1571 was indeed attributed to Our Lady of the Rosary by Pope Pius V. Nevertheless, the iconography of the protective Virgin and the 15 mysteries of the Rosary was already being dealt with before 1571. 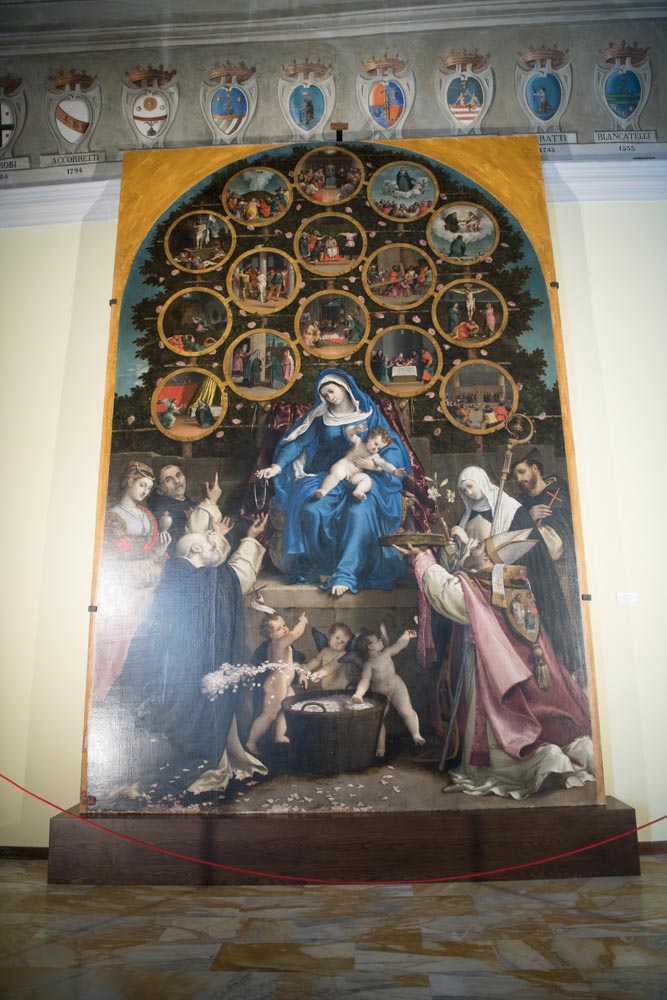 The magnificent painting by Lorenzo Lotto, created for the Confraternity of the Rosary of Cingoli in 1539, is still visible, almost 500 years after its creation, in the same small town. Housed until 2016 in the town gallery, the painting can now be seen in a room in the town hall (“Sala degli Stemmi” or Hall of Coats of Arms). To access it, call the town hall or go to the town library, where the person in charge has the keys. He will be happy to guide you during the library’s opening hours. If the visit is free of charge, please remember to leave a small offering to help preserve the painting. Visitors are few and earthquakes also have a financial impact on the accounts of small Italian town councils.

It is now at the Museum of Sacred Art in Mogliano (4500 inhabitants) that you must go to admire the Madonna in glory (“Madonna in Gloria e Santi”) painted in 1548. The painting was previously in the church of Santa Maria di Piazza, closed since the earthquake of 2016. The painting is still in its original frame (like the one in Monte San Giusto). The painting has a very special iconography. The presence of a circular wall, with only a few monuments protruding, makes this painting very singular and difficult to interpret. 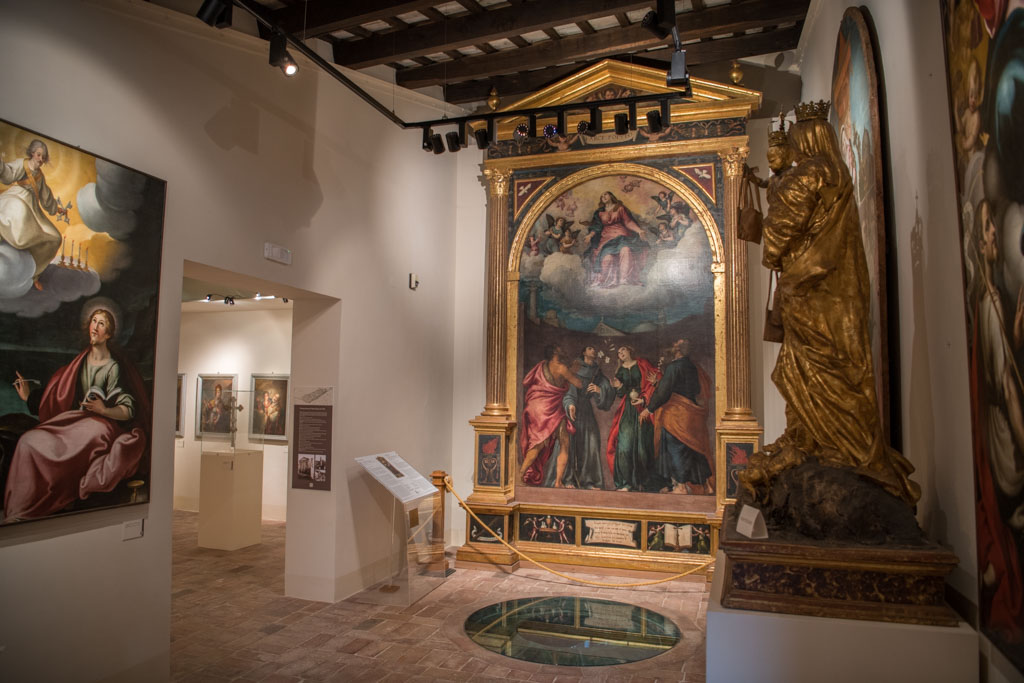 Madonna in glory by Lorenzo Lotto (1548)
Museum of Mogliano

It is essential to call beforehand as the museum is only open by appointment. Note the circular glass in front of the painting; it is placed above the nave of the church! The museum is, therefore, located above the church.

A commemorative plaque is painted underneath the painting. It is a reminder that the painting was painted for the church of Mogliano in 1548.

Lorenzo Lotto finished his life in Loreto and maintained his faith there (he was buried in a Dominican habit). In the Basilica, a plaque reminds us of the extraordinary qualities of this painter (the plaque is located at the left entrance, behind the main door, and is therefore difficult to see).

Lotto’s works can be seen in two places. In the Basilica itself, there is a Saint Christopher accompanied by Saint Roch and Saint Sebastian. Pay attention to the painting to discover the painter’s signature on a parchment decorated with an enigmatic eye. 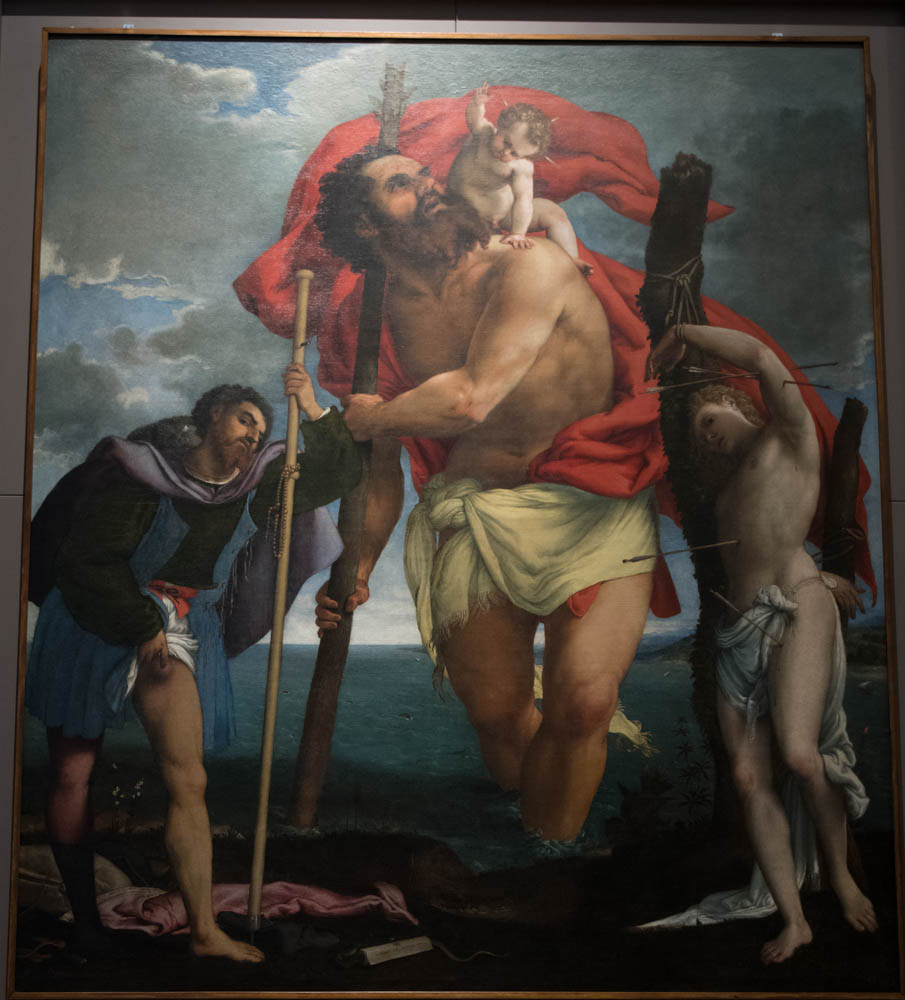 In the basilica museum, there are 8 additional works, including the Adoration of the Child Jesus, probably the most beautiful of all. Christ and the Adulteress (1548-1550) is also a stunning painting, in a rather Bellinian composition as far as the arrangement of the figures is concerned.

The room in the museum where Lotto’s paintings are collected also contains a facsimile of his moving “Libro delle spese”. 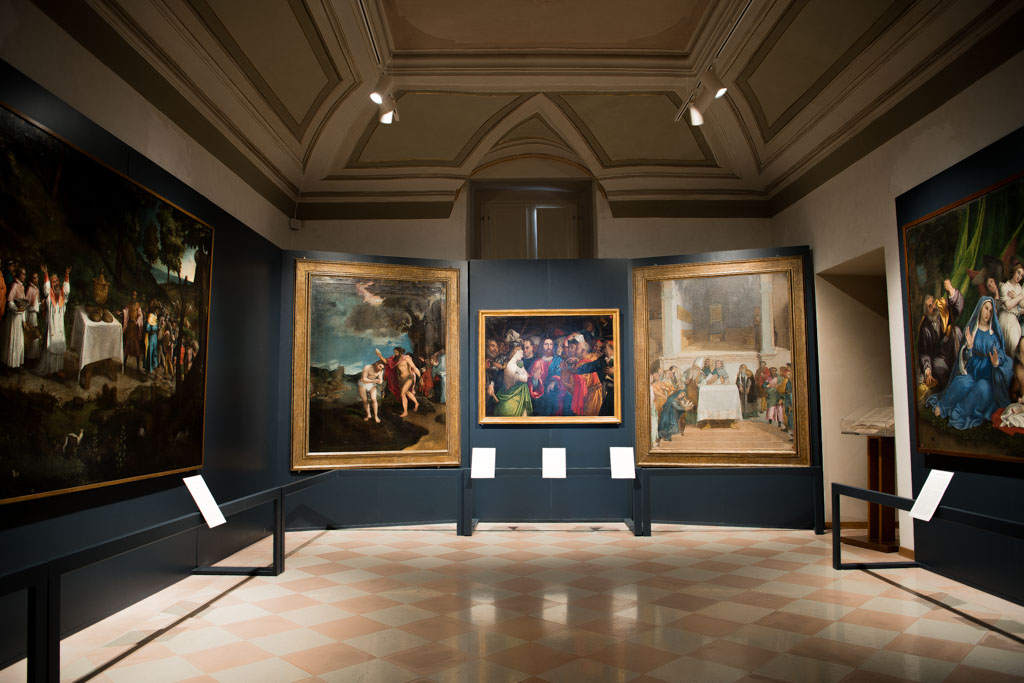 8 works by Lorenzo Lotto are gathered in the same room of the museum of the Basilica of Loreto. 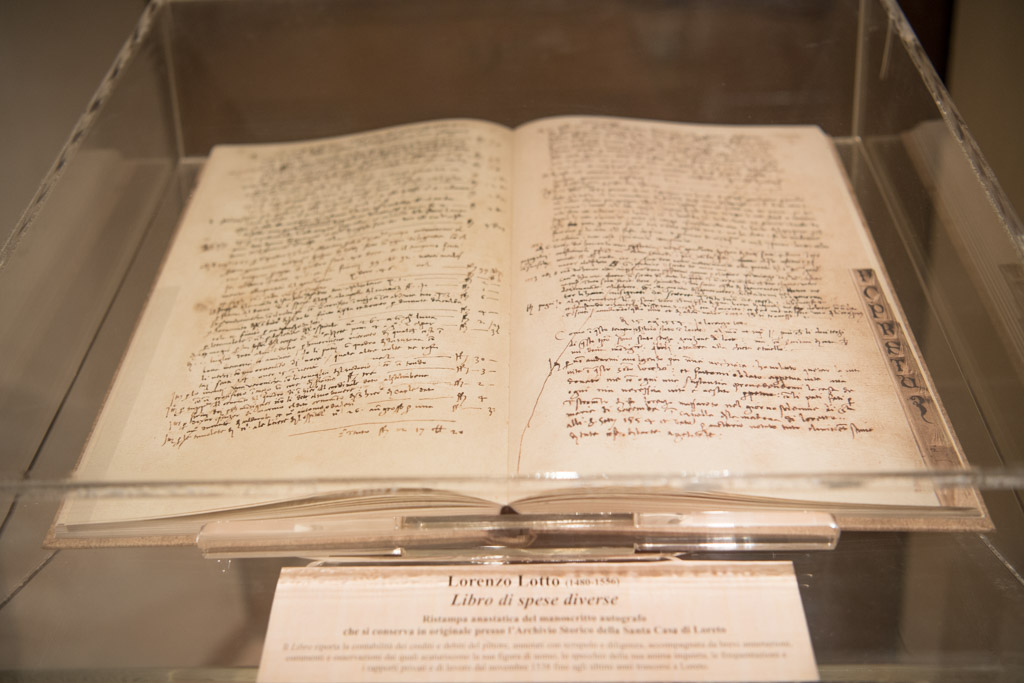 The museum of the Basilica of Loreto has a facsimile of Lorenzo Lotto’s expense book.

The “hunting picture” would not be complete without mentioning the works that are in Ancona:

Also noteworthy is Saint Roch (1549), which is in the collections of the National Museum of the Marches in Urbino.