In search of Carlo Crivelli in the Marche region (Italy)

Home » Misc. » In search of Carlo Crivelli in the Marche region (Italy)

For once, I would like to share with you something other than marketing and Big Data. In the same way that I have shared my adventures in Iceland, this year I opted for a cultural holiday with my family.  And what could be more complicated than to interest a 9-year-old child in Art in general and painting in particular? It was, therefore, necessary to deceive to combine the interests of the adults and children. It was in the form of a “treasure hunt” that this holiday took place, or more precisely a hunt for Italian Renaissance paintings.

After a short stop in Mantua, the city of the Gonzaga’s and Andrea Mantegna (whose father Giovanni Santi, Raphael’s father, said he was the best of all), it was in the beautiful Marche region that we spent our holidays. This region was under papal control from the Middle Ages until the Napoleonic conquests of the late 18th century. Vatican protection was therefore for 400 years a fertile ground for the emergence of great artists, particularly from the nearby Republic of Venice. An example being Carlo Crivelli (1430-1495), on whose tracks we followed.

Carlo Crivelli: a unique artist of the Italian renaissance 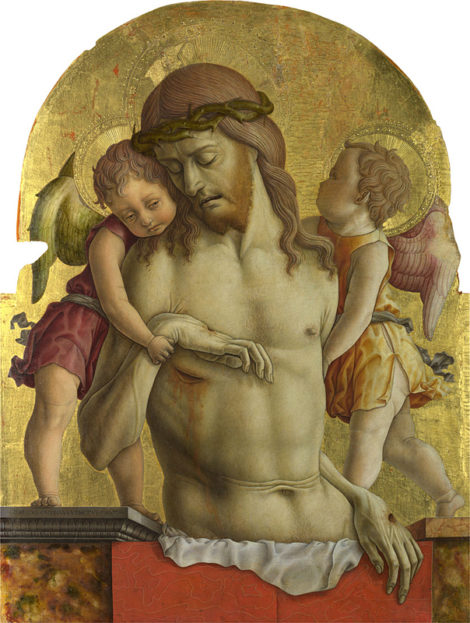 Carlo Crivelli (not to be confused with his brother Vittore or Vittorio Crivelli, about whom we will talk later) was born in Venice and first learnt painting with Antonio Vivarini in Venice, before moving to Padua where Squarcione (whose most famous student was Andrea Mantegna) helped him refine his skills.

While at this time of transition in the 15th century, artists were moving away from the Byzantine pictorial tradition, Carlo Crivelli invented a style that was recognisable among all, borrowing realism and perspective, emotions, while preserving certain Byzantine traits in particular. His style surprised me because his fine lines reminded me a little of the comic strip (purists, please excuse me for this bizarre parallel).

My interest in Carlo Crivelli goes back a few years when I discovered one of his paintings at the National Gallery in London (see on the left). This very moving experience had inspired me to learn more about this artist. It was while preparing our summer holidays that I came across a page that listed Crivelli’s works in the Marche region. The idea, therefore, came naturally to me to use the pretext of a census to discover Crivelli and update a map of his works. A way to combine work with pleasure and to learn how to create an interactive map with Google Maps.

Let’s go forward for a few hundred kilometres through Les Marches in the footsteps of Carlo Crivelli.

Our first stop took us inland, to the south of the Region.

The first stop is Montefiore dell’Aso, a friendly village south of Fermo. Carlo Crivelli had made a polyptych for the church of Saint Francis, which unfortunately was dismantled in the 19th century to finance renovation work. Only six incredible panels remain in the community museum of Montefiore dell’Aso (“Polo museale di San Francesco”) that immediately capture Carlo Crivelli’s style, his attention to detail and emotions. For the anecdote, the upper central panel (missing) is the one at the National Gallery in London that initiated my quest. Two other panels (including the most essential lower central panel in the composition) are supposed to be located at the Royal Museum of Fine Arts in Brussels. This page allows you to view them. Unfortunately, once I got there, I didn’t see them exposed. They must, therefore, be in storage. 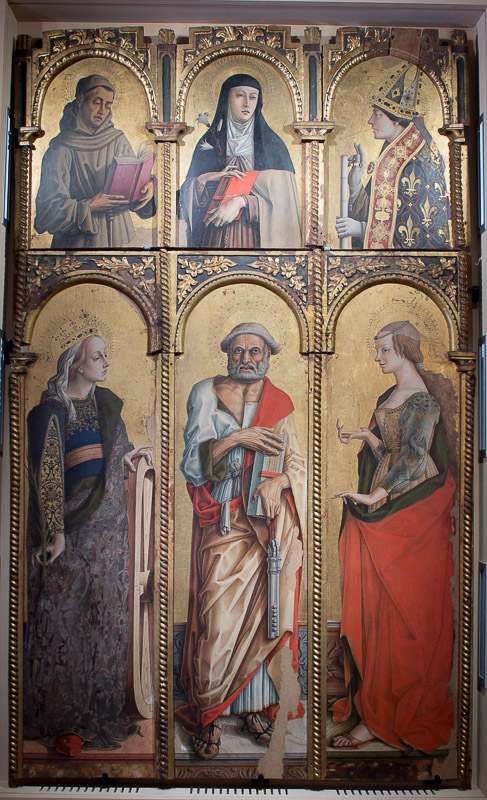 Our second destination was Monte San Martino, a mountain village 1 hour from Montefiore dell’Aso named after the saint of the same name. It is therefore logically in the eponymous church that there is a polyptych (this one in its entirety) signed by both Carlo Crivelli and his brother Vittorio. To access the church (closed outside the church services), please contact the public art gallery. If no one answers, go directly to the community administration on the first floor of the bar-restaurant in front of the art gallery. The person on duty has the keys to the church and will probably be happy to guide you and open the doors for you.

Concerning the polyptych itself, experts agree that the 4 Saints in the upper section are by Carlo’s hand, as well as those on the left in the lower section. One may also wonder why Vittore inherited the main parts when his technical mastery was inferior to that of his brother. The design of the Monte San Martino polyptych is similar to that of Montefiore dell’Aso: a Pietá in the middle of the top section flanked by two panels on each side; a Madonna and child in the bottom part and two side panels also. However, the predella is different in its conception as Monte San Martino’s has 13 portraits while Montefiore dell’Aso had probably only 11. 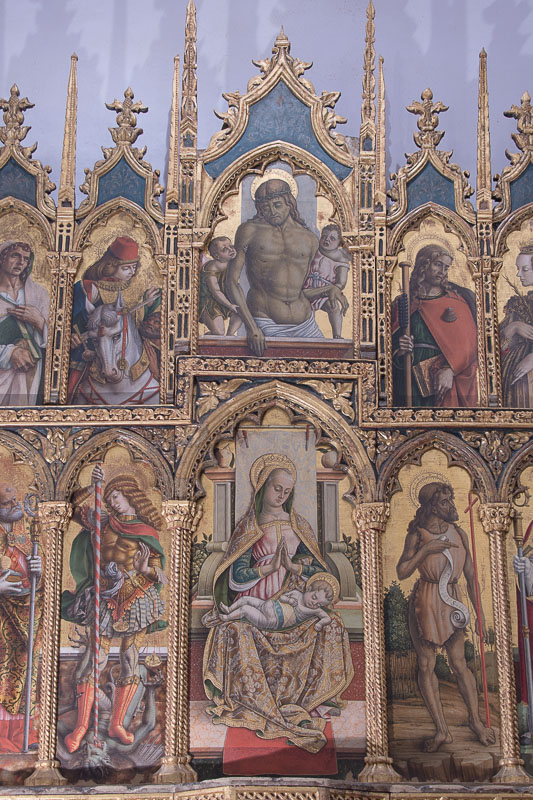 Knowing that Carlo Crivelli established himself in Ascoli Piceno, this provincial capital is an extraordinary place to discover his work. The latter is visible in two distinct locations: the cathedral (the only complete work by Carlo Crivelli still in existence at the place for which it was designed more than 500 years ago) and the municipal art gallery (damaged by the earthquake of 2016 but still accessible). In the latter are two works by Carlo Crivelli: 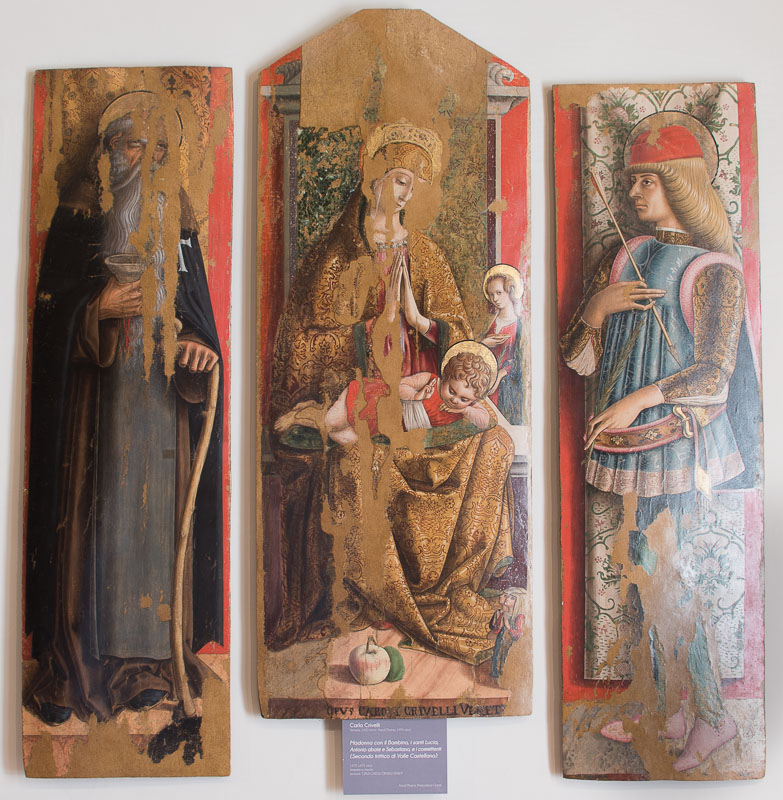 The highlight of the trip to Ascoli Piceno was, of course, the visit to the cathedral where the polyptych commissioned for the same place more than 500 years ago (1473) in honour of San’Emidio remains. It is one of Carlo Crivelli’s most representative works, intact and a perfect witness to the art of the 15th-century altarpiece. However, it is regrettable that the work is not accessible at close range. Hanging high up, you need to have good eyes to appreciate the details. Do not hesitate to put 1€ to hear the explanatory information and to illuminate the work. The chapel is not very bright, even in summer. 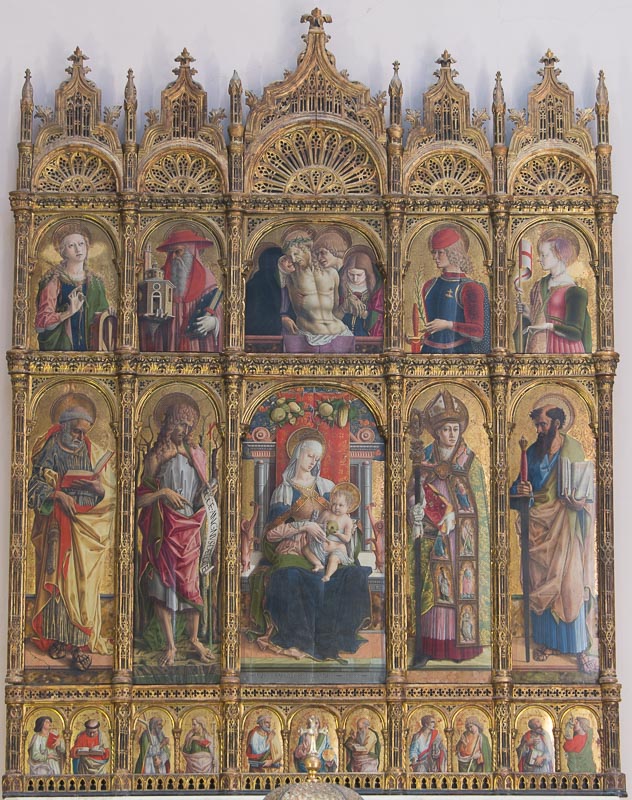 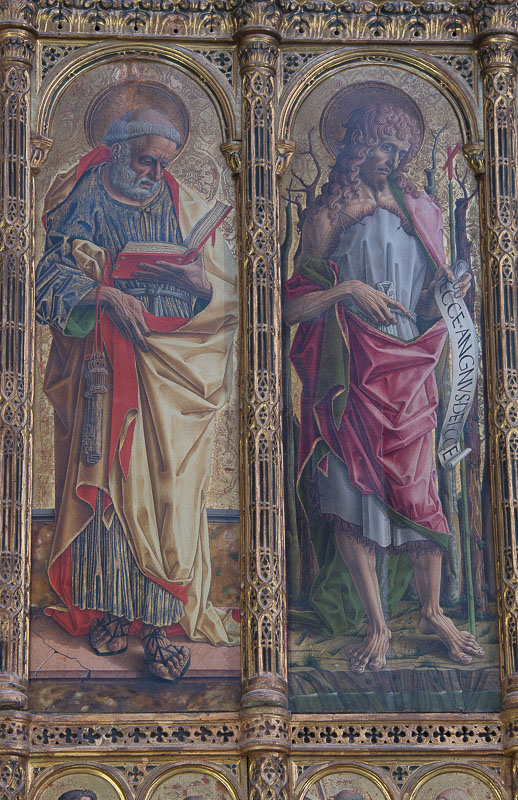 The Macerata Museum (Palazzo Buonaccorsi) has a very touching work by Crivelli, a Virgin and Child of which little is known about its origin. It is said to have been part of a polyptych, which was largely destroyed by the fire in the church (Chiesa dei Minori Osservanti) where it was located. Even without its context, this work remains very moving because you can feel a mother’s love for her son. The look of little Jesus is reminiscent of the very expressive look of the angels supporting Jesus as he descends the cross on the National Gallery display. 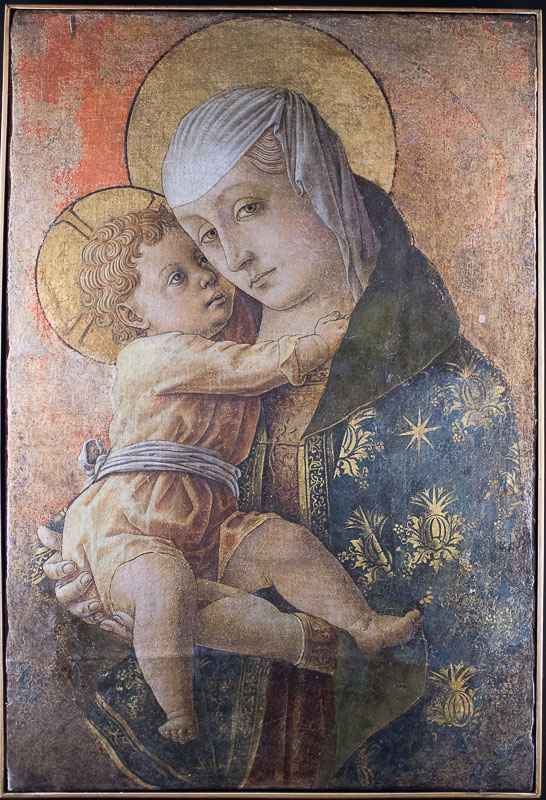 This work is undoubtedly the central point of the collection gathered at Palazzo Buonacorsi. I would strongly recommend that you do not visit on a Monday (guided tours only and limited to +/- 60 minutes). If you wish to take the time to appreciate the works of the museum, the rest of the week is open hours. Please also note that the entrance ticket (10€, valid for ten days) gives you the right to visit other places in Macerata such as Palazzo Ricci (private palace, guided tours only at fixed times for which you must book well in advance).

The last two stages of my journey led me to Corridonia and Sant-Elpidio Mare.

Corridonia is a small town situated halfway between the Adriatic Sea and the Apennines. It is in the church of San’Agostino that you will have to go to find the central part (Virgin and Child) of what was once obviously a polyptych. The work has been badly restored and has lost its charm. The rather unpleasant security guard did not let us take any pictures.

This chapel, transformed into a small museum, is also worth a visit for the other works on display, including a superb polyptych by Vivarini, with whom Carlo Crivelli learned to paint.

Finally, not far from here is Sant’Elpidio Mare. The website, le-marche.com indicated the presence of a work by Carlo Crivelli at the town hall. It is in fact a polyptych by his brother (Vittore Crivelli), and it was transferred 20 years ago to the public art gallery which also bears his name. As a matter of form, I have put some pictures of Vittore’s work, whose pictorial language is dominated by his brother’s influence. If the faces lack depth and expressiveness compared to those of Carlo, we should be careful not to denigrate Vittore too quickly, who nevertheless shows great meticulousness in his work and ultimately produces work of outstanding quality and great interest. To access the art gallery, go to the tourist office 200 m away. After paying a modest entrance fee (€4.50), someone will open the doors of the museum for you. 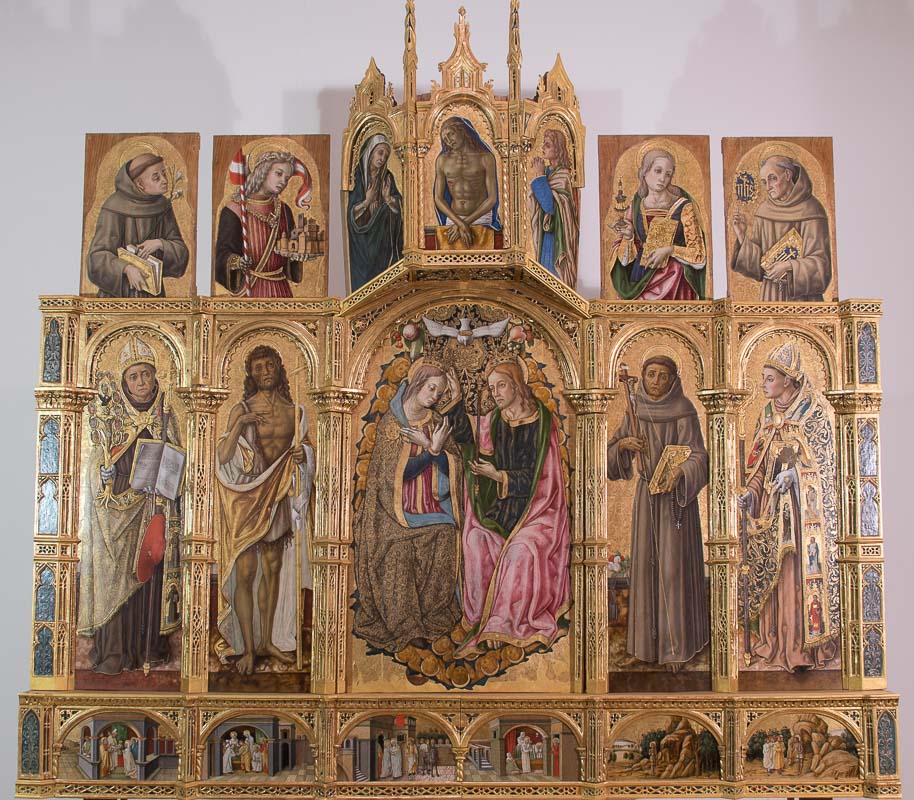 I hope that this short review of our journey in search of Carlo Crivelli has made you want to know more about this painter. If you wish to reuse some of the images, you can do so by quoting their origin and including a link to this website. If you would like more pictures or higher resolution versions, please do not hesitate to contact me. 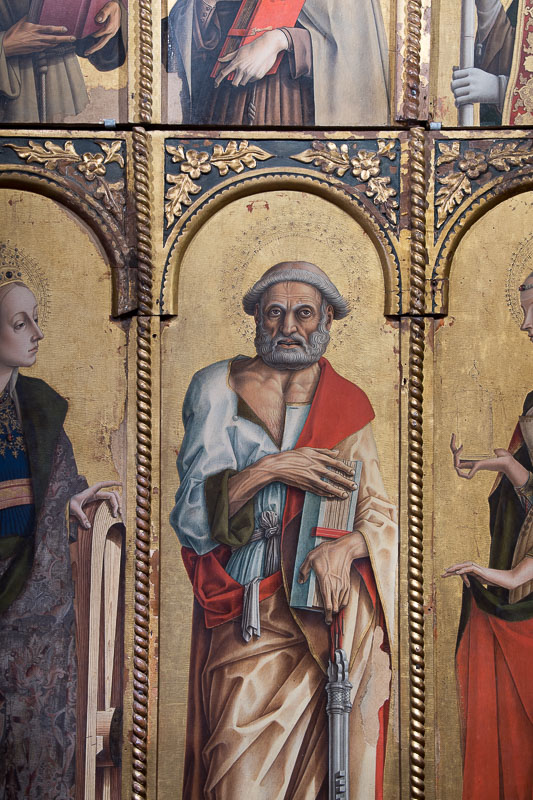 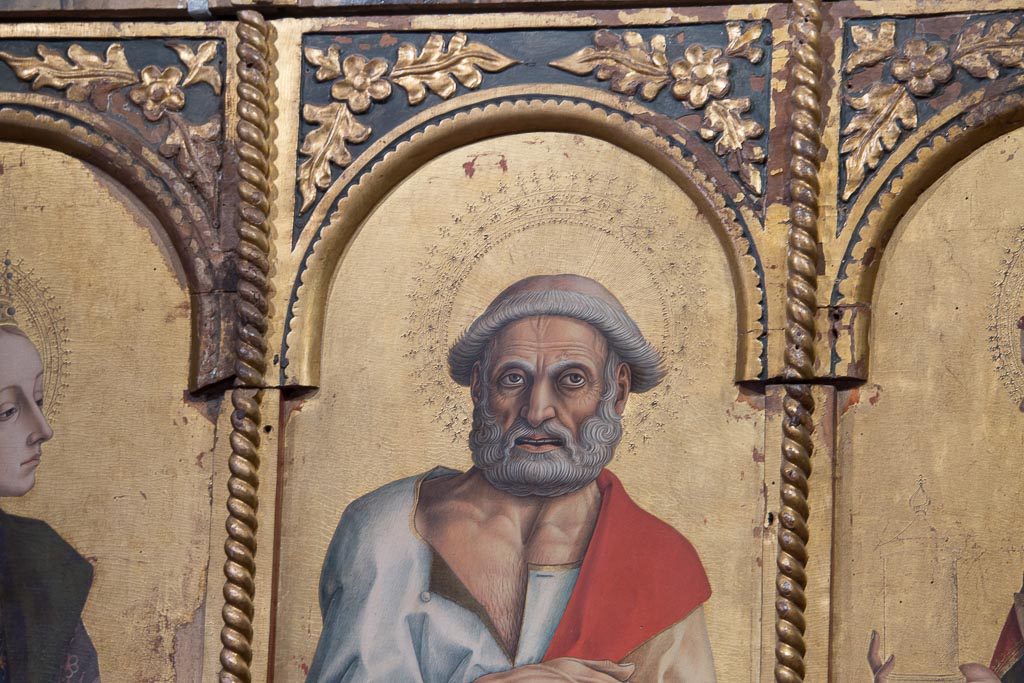 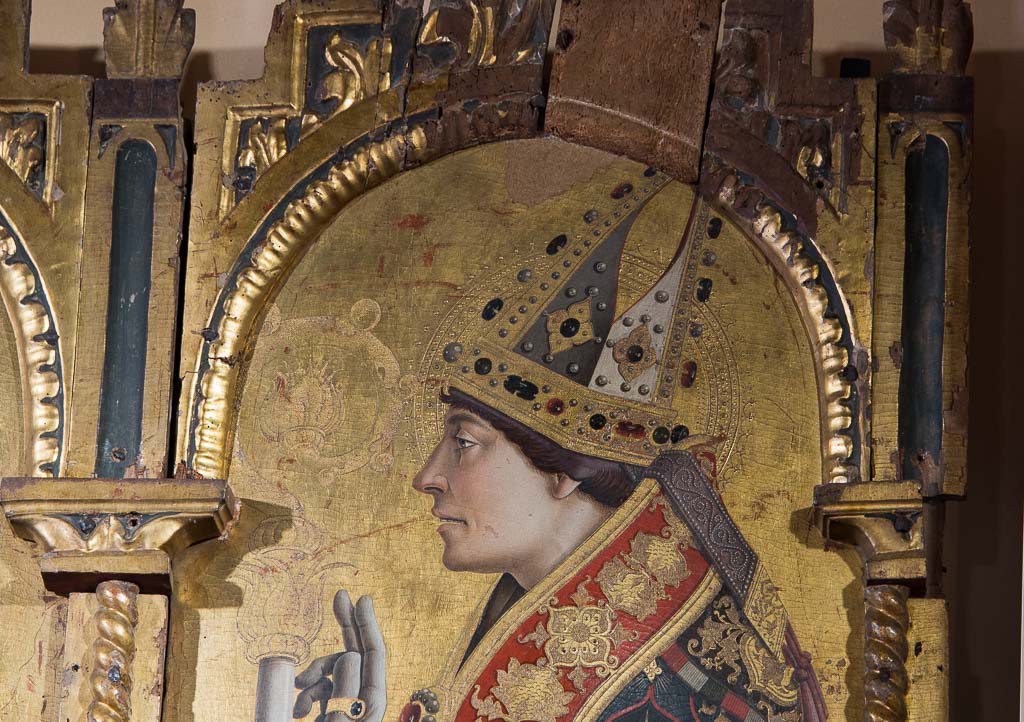 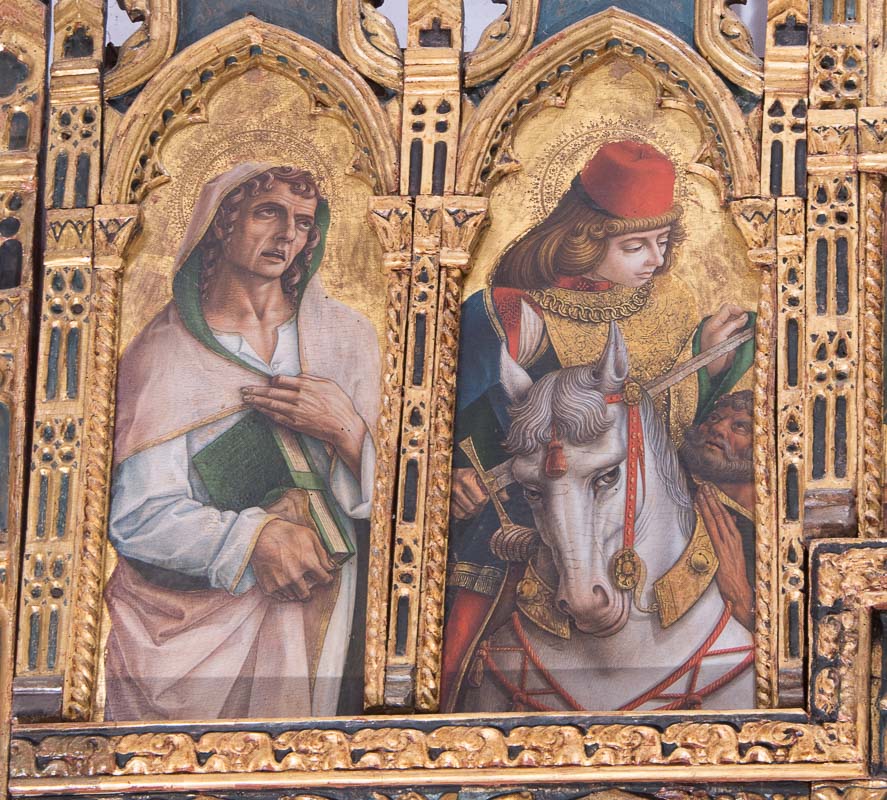 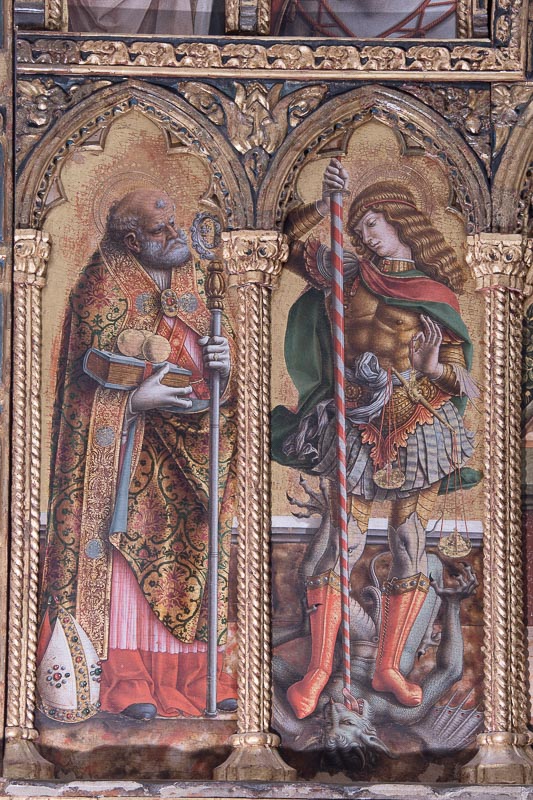 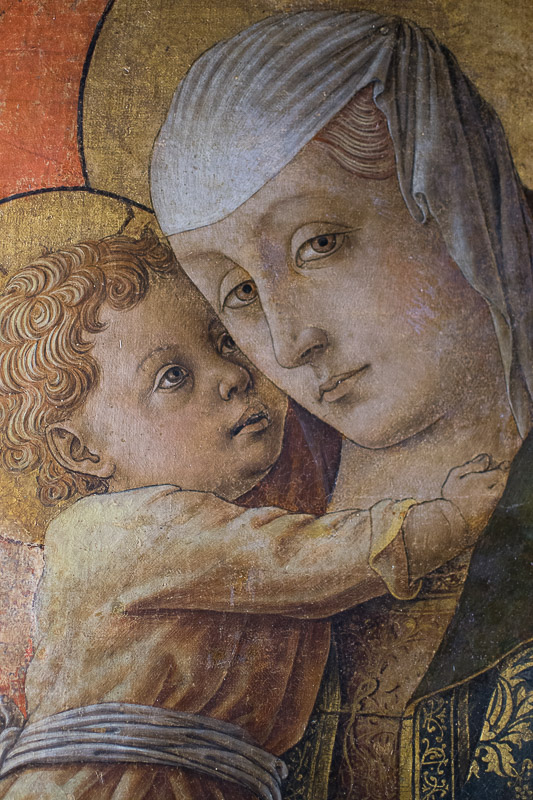 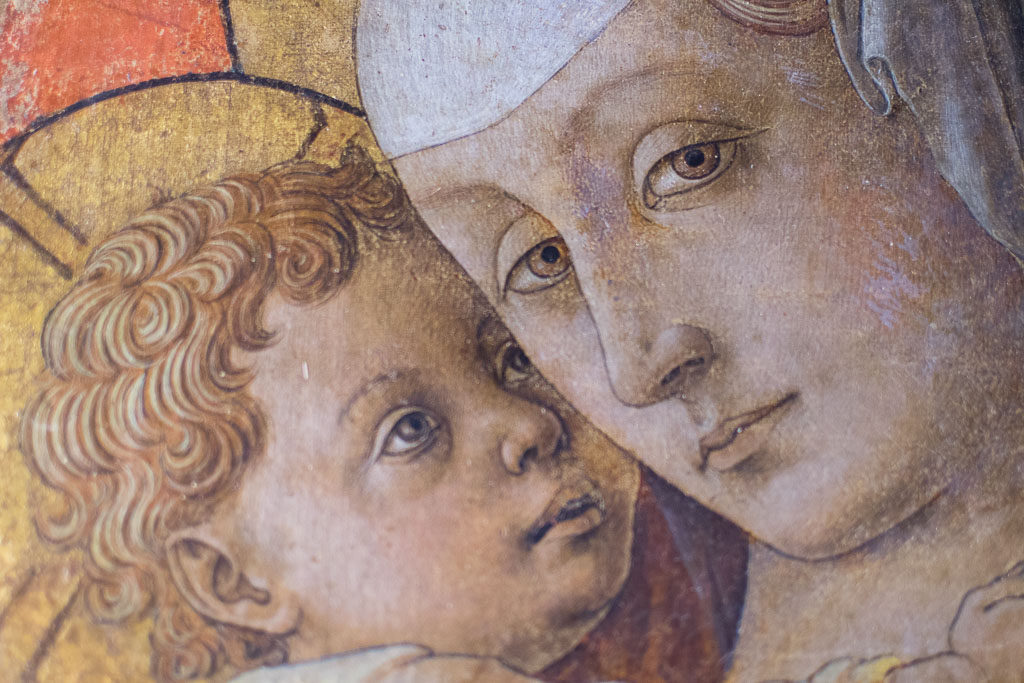 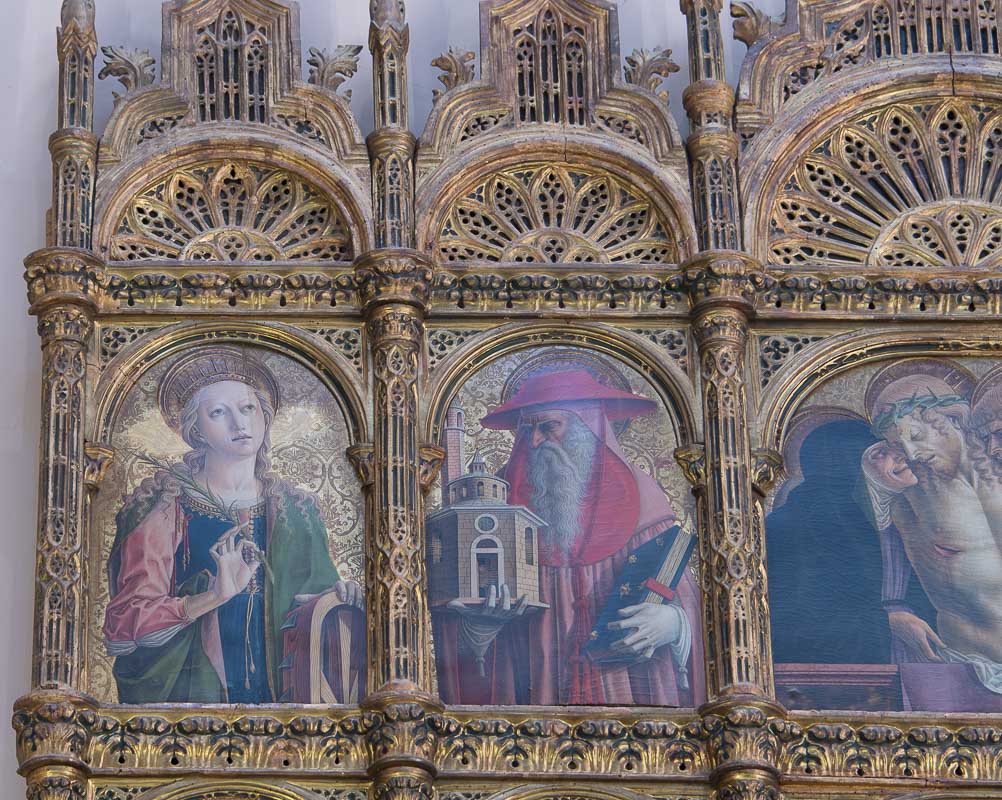 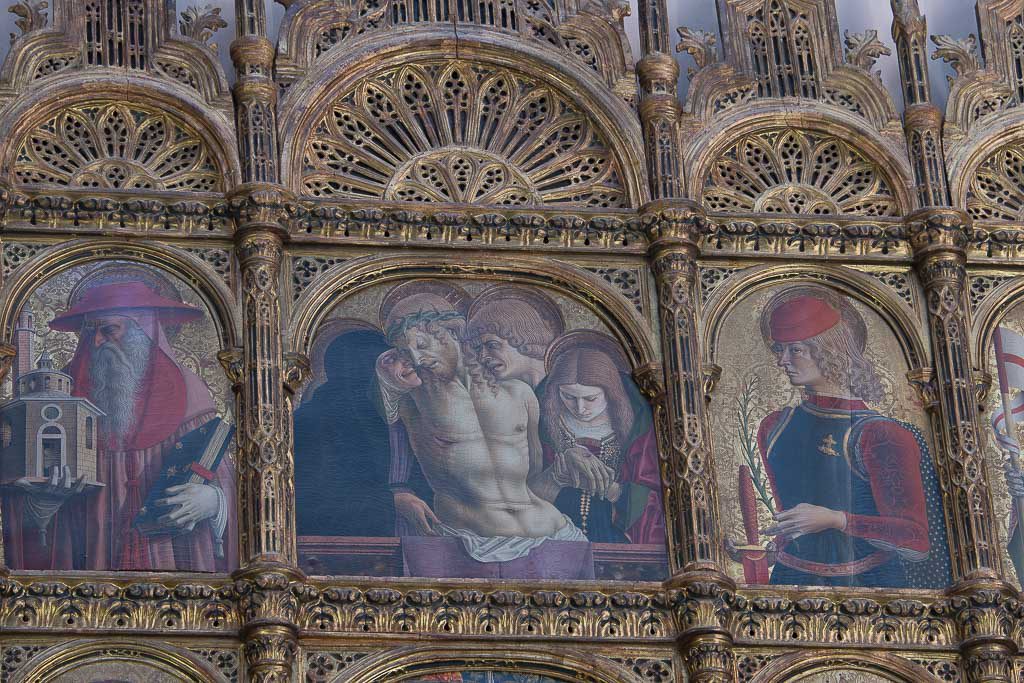