Fundraising: UK and retail in the lead [Research 2021]

Home » Entrepreneurship » Fundraising: UK and retail in the lead [Research 2021]

IntoTheMinds has analyzed 841 fundraisings announced by European start-ups between September 2020 and July 2021. Our results show that the retail sector has concentrated the most investments, that British start-ups dominate the ranking, and that fundraising has increased sixfold in May-June 2021. The research on the profile of the 1374 founders of the companies that have raised funds shows that only 8.1% are women.

After the Covid-19 crisis that hit many sectors in 2020 and led to a widespread slowdown in the economy, the time for a rebound has arrived. Supported by accommodative financial policies, most industries have seen a substantial recovery in 2021. European start-ups have also benefited from this financial windfall, and 2021 is shaping up to be an exceptional year.

IntoTheMinds has realized using unprecedented research on the whole European continent to understand the dynamics of fundraising. Using never-before-seen data, we present a chronological analysis of fundraising and then reveal the countries and sectors that have benefited the most. We end with a critical and again unpublished note on gender inequality within the start-up ecosystem. This result is to be compared with our research on female entrepreneurship.

We have manually collected all available data on fundraisings that have been published in specialized journals (eu-startups.com, maddyness.com) and have completed the list with a search on LinkedIn.

For the period 01/09/20 – 14/07/21, we found 841 fundraising events in Europe. For each of them, we enriched the data with the date, the country, the identity and the gender of the founders, the geographical location, and the sector of activity.

An explosion of fundraising activities around June 2021

When you research the history of fundraising since 2020, it is striking how much it has accelerated since 2021. The period of the Covid crisis has undoubtedly weighed on the ability of start-ups to raise funds (we talked about it in this podcast).

From May 2021 onwards, it seems that the market went wild with substantial amounts invested in retail, banking/insurance, and electricity. Indeed, in June, Northvolt raised €2.2 billion (in orange on the graph below) 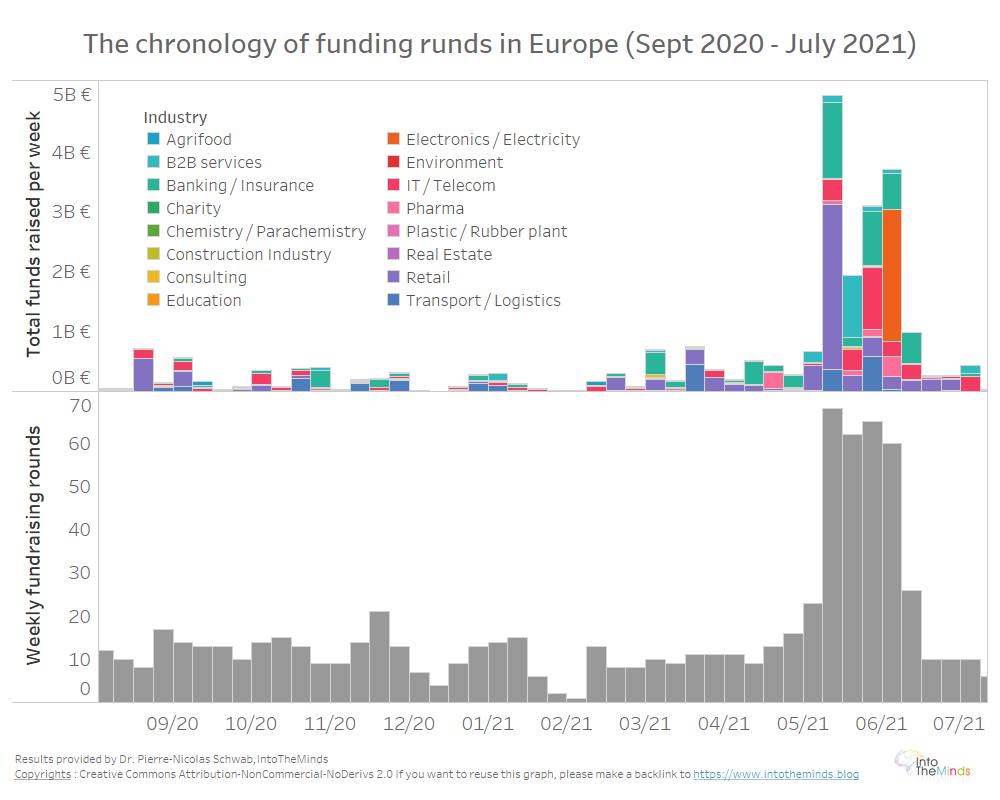 Which countries attract the most capital?

Not surprisingly, the United Kingdom leads the European countries in fundraising with approximately €6.66 billion invested over September 2020 – July 2021. It is ahead of Germany (€5.133 billion) and, more surprisingly, Sweden (€4.386 billion). We counted no less than 45 fundraisings for Swedish start-ups over the period, one of which is also the largest in our ranking: Northvolt. The battery manufacturer announced a €2.2 billion fundraising in June 2021, representing 50% of the capital raised in the whole country. France comes in 4th position with amounts raised that are almost 4 times higher than Spain’s in 5th position.

In total, no less than €25.6 billion was invested. 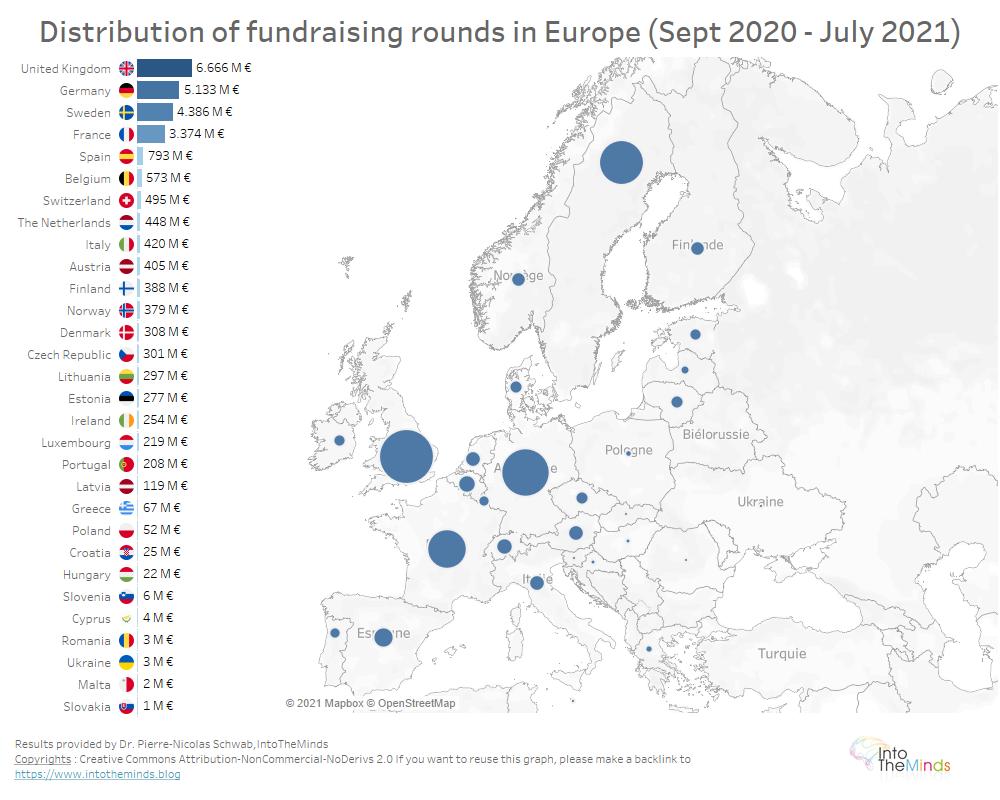 In which sectors are private funds invested? 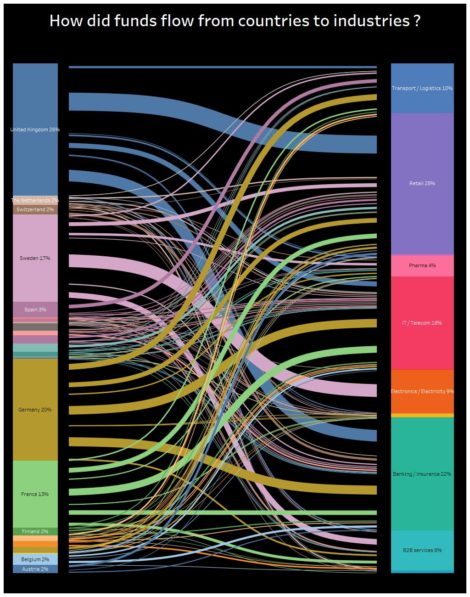 What our research reveals is that the funds invested were primarily in the retail sector. Retail represents 26% of the amounts invested, proof if it were needed of the strength of this sector. The Covid crisis has indeed been an upheaval for food and non-food retail, giving rise to delivery needs and anchoring e-commerce in the customs. An actual race was launched to shorten delivery times, a very capital-intensive race whose effect can be seen here.

The 2nd sector for the amounts invested is the banking and insurance sector. This second place reflects the accelerated innovation in the industry (FinTech, AssurTech, etc.), bringing a breath of fresh air in the form of new services.

The 3rd place goes to IT. It is impossible today to do without “data,” which explains this strength.

Sankey’s graph above allows you to appreciate the flow of capital between countries and sectors. Click on it to enlarge it. 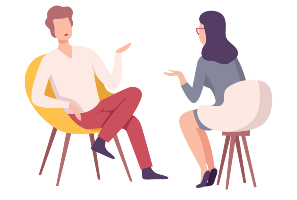 Gender equality is far from being achieved: only 8.1% of women

What our research also reveals is that women are underrepresented among start-ups raising funds in 2020-2021. We had already highlighted significant differences in entrepreneurship in general; the imbalance is even more glaring.

The analysis covered 1,374 founders, which is far from a trivial sample. We concluded that 91.9% of the founders were men.

The research on fundraising in Europe in 2020-2021 shows a significant influx of capital in May-June 2021 in the retail, banking, and power sectors. The dynamism of these 3 sectors is explained on the one hand by the effects of Covid on the retail industry and, on the other hand, by a structural interest in fintech and the battery industry.

The attractiveness of UK start-ups for private capital has not waned despite the Brexit. Most capital is invested across the Channel, but the UK is now trailing other European nations.

However, the start-up ecosystem remains highly unequal, and gender parity is far from being achieved. Significant efforts are still required to feminize the start-up world.