Boco Brussels: the reasons behind the failure

Home » Entrepreneurship » Boco Brussels: the reasons behind the failure

Boco Brussels is over. The franchise was held by Star Food Company, who initiated legal reorganisation proceedings before the Brussels Commercial Court. This is the end of the Boco adventure in Belgium, a concept we have been following since its very beginnings. We had also met a long time ago with its co-founder Simon Ferniot (brother of the chef and TV presenter of the same name, also co-founder) to talk to us about a concept that, it must be said, had many positive points. Organic before its time, Boco offered quality dishes, prepared by chefs, and a quick culinary experience in a market where employees take shorter and shorter lunch breaks. I was myself a fan of the brand and didn’t hesitate to take a detour to eat there when I was in Paris. So how can we explain that the Belgian franchise did not take off? In this article, we review some hypotheses and focus on the satisfaction and loyalty of Boco’s customers.

Read also
Impossible to manage an HORECA profitably in Belgium ? Not true!

On 27 September 2018, Boco Brussels closed its doors at 521 avenue Louise and announced the news on its Facebook page. The Belgian franchise had also opened a second point of sale at 15 rue Archimède in the European district. So, this store was also closed. 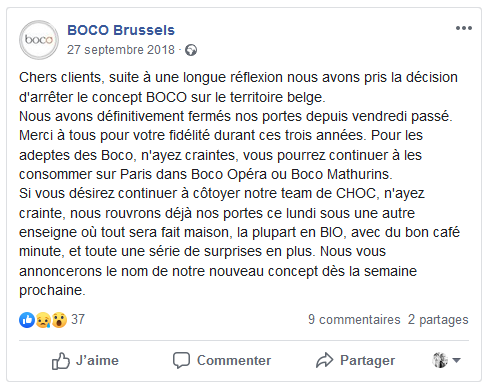 Translation of the announcement :

Dear customers, after careful thought we have decided to stop the BOCO concept on the Belgian territory. We have definitely closed our doors since last Friday. Thank you all for your loyalty during these last three years. For Boco enthusiasts, don’t worry, you can continue to consume these in Paris in Boco Opera or Boco Mathurin’s. If you want to continue to associate with our outstanding team, don’t worry, we are already reopening our doors this Monday under another brand where all will be homemade, mostly organic, with good coffee, and a whole series of surprises as well. We will announce the name of our new concept next week.

How to explain the failure of Boco in Belgium

It is, of course, difficult to explain from the outside the failure of the Boco franchise in Belgium. But we can still examine some hypotheses.

The locations of the stores

In terms of location for an HoReCa business it was difficult to do better. The Boco franchise had 2 outlets. The first one opened at 521 avenue Louise, one of the best thoroughfares in Brussels. The outlet was also located on the right side of the avenue and in its upper part near many offices including those found in the ITT tower. In April 2018, the second outlet opened at 15 rue Archimède, in the heart of the European district, a landmark for wealthy employees who were just waiting to experience Boco’s sunshine.

The Star Food Company management team was composed of Olivier Barry (22%), Julien Van Beneden (12%) and Yves Deflandre (10%). They are also the shareholders of a popular group, active in HoReCa, which operates many well-known Brussels establishments such as La Taverne du Passage, ‘T Kelderke, L’Estaminet du Kelderke, La Brouette, La Rose Blanche (located on the Grand’ Place de Bruxelles). It is therefore difficult to imagine that the team in place could have failed due to a lack of expertise.
On the French management side, a significant upheaval may have been experienced following Simon Ferniot’s departure and his replacement by Christophe Tanguy (see his interview here) who had repositioned and sought new outlets for the range (perhaps already a sign, as the closures of some establishments suggested, that not everything was necessarily going well).

The price regularly comes up in online reviews as one of Boco’s stumbling blocks. Perhaps we should, therefore, look at this issue and question the adequacy of the price of the dishes offered for a city like Brussels and for Belgium in general. If Boco’s prices may seem reasonable in a city like Paris, they may be perceived differently in a city like Brussels.

The other important aspect is of course quality and here again, if there was not much to complain about, it is perhaps at the level of expectations that the downside is hurting. The Boco concept was based on the image of the chefs behind the dishes (all of irreproachable Michelin “pedigree” with 2 or 3 macaroons); customer expectations were high; perhaps too high, which explains the disappointment that can be read in some comments here and there. 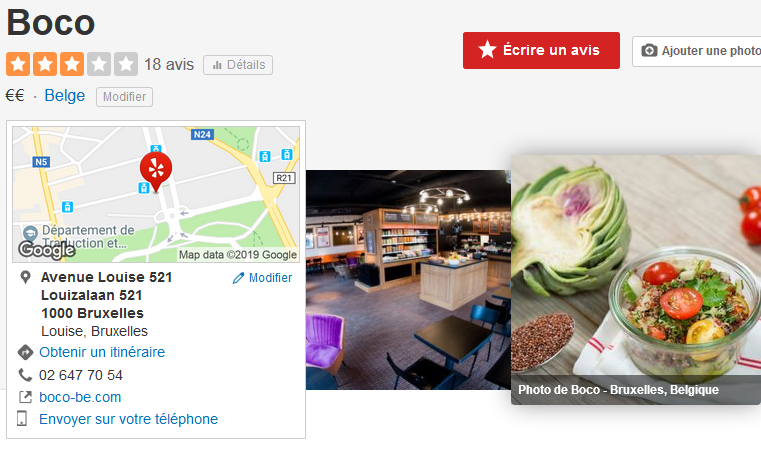 In the end, if Boco closed in Belgium, it was necessary because of lower than expected sales figures. If we can only speculate on the causes of this insufficient turnover, customer satisfaction and loyalty could be a likely cause. Customers’ high expectations of the concept (from Michelin’s top chefs 2 and 3 macaroons) may have led to disappointment among some customers who, surprised by the prices, did not return. The excellent form of a local business (especially if it is active in the HoReCa sector) is often directly related to the loyalty of its customers.