At the IBC 2018 show (the ideal place to do market research in the broadcasting sector) I stumbled upon a very interesting innovation presented by BNR Nieuwsradio during one of the conferences. BNR Nieuwsradion is the only commercial radio in The Netherlands and is part of the FD Mediagroep. What Joeri Nortier presented at IBC on behalf of BNR is an amazing innovation and this is what we’ll cover in today’s post.

The principle of the BNR Smart radio app is to provide a personalized audio experience to the user. Speech-to-text and NLP techniques are used to segment podcast and categorize them according to main topics.
After the user has chosen his topcis of interest (explicit feedback type), the system gathers the podcasts segments and assembles them in playlists.
Joeri Nortier, the product manager on charge of digital at FD Mediagroep, gave examples of nicht topics that can now be offered to niche segments of users.

The process behind the BNR Smart Radio app

Explicit feedback mechanisms are used in diverse ways to enable personalization. First of all the user is prompted to choose his favorite topics from a list (declared interests, see below). The designer of the app also judiciously added a feedback mechanism at the playlist level so that user can rate his / her satisfaction with how audio segments are assembled together. 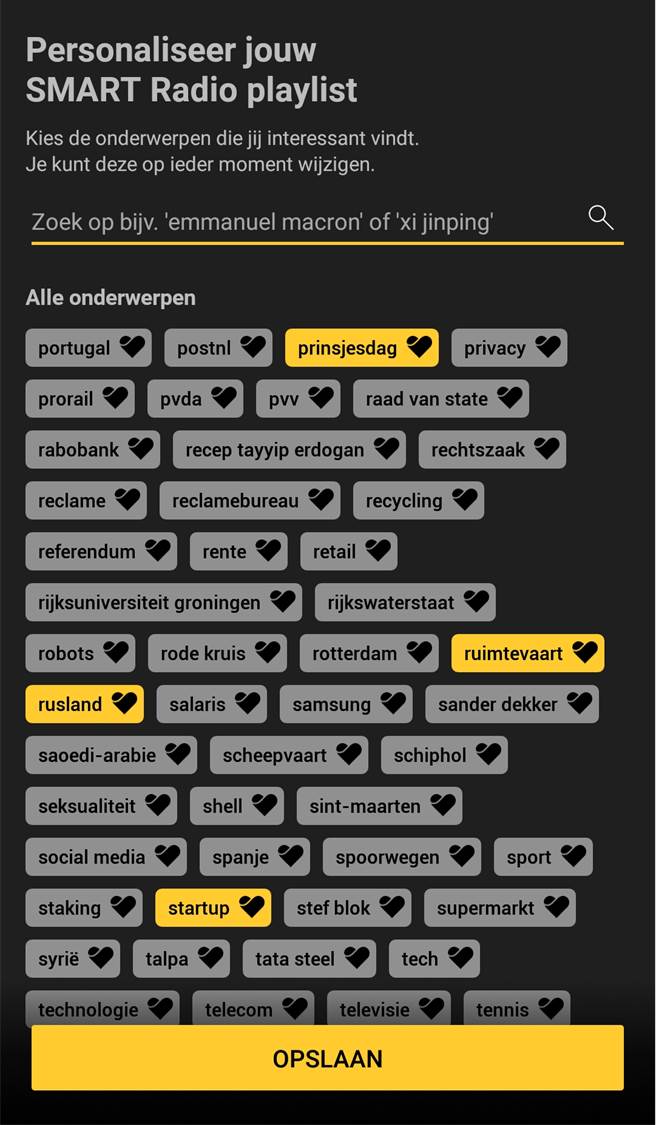 The declared interests screen of the BNR Smart Radio app

The Beta version of the BNR Smart Radio app was launched in October 2018 on Android. It has 400 users currently and with the iOS version being launched by the end of the year, Joeri Nortier hopes to triple the number of beta users.
Joeri explained at the AI workshop organized at the EBU headquarters that beta users were very keen on reporting problems and that some problems have emerged like the quality of the automatic segmentation of the podcasts.

Why the BNR Smart Radio application is remarkable

The BNR Smart Radio “relinearizes” the user experience ; it’s easy, provides value to the user and it’s already remarkable. But there is more than that.
What struck me is the business case behind the technological innovation. Too many of the innovations I see lack a real business intent; here it’s crystal clear. The lifetime of audio programs is quite short and without proper metadata it’s impossible to find a specific topic among all programs that have been produced. This in turn limits the possibility to reach niche audiences which can’t be targeted using standard practices. You have to have some kind of automation to make it economically possible to propose specialised playlist to sometimes only a few hundreds of people.