The snowball effect is a sampling method used in qualitative research. It simplifies the recruitment of respondents under challenging contexts. Sampling realized with the snowball effect has advantages and limitations that we discuss in this article. You will also find an exhaustive definition as well as concrete examples. If you would like more information about the qualitative research we realize, please contact us.

What is the Snowball effect?

The snowball effect is a technique for recruiting respondents for focus groups or individual interviews. It is, therefore, a sampling method for qualitative research.

The snowball effect consists of asking each person contacted for the contact details of one or more other people to be interviewed. With each contact, the list of potential respondents grows like a snowball that continually grows when pushed. This step can be implemented directly during the first contact (before the interview) or after the respondent has been interviewed.

The snowball effect is easy to implement, which explains its success. It is an alternative to more complicated approaches such as participatory observation. Anthropologist Teun Voeten, for example, has lived with homeless people for his research.

It is therefore easy to understand that this is a non-probabilistic sampling method. The snowball effect does not allow for the construction of “representative” samples, even if the notion of representativeness in qualitative research does not make sense (we refer you to our article on saturation and our qualitative sample size calculator).

If you decide to take advantage of the snowball effect, you can implement it in 2 ways:

In practice, here are some ideas for questions to ask when you contact potential respondents or at the end of your qualitative interview/focus group. Proceed as follows.

1) First, recall the context of your research

“As a reminder, my research is focused on studying [description of objectives]. As part of this, I would like to interview people who [description of ideal respondent profile].”

2) Ask for the contacts of other respondents

“I’m sure you know people who fit this description. You could really help me by putting me in touch with them.”

“Maybe you can give me some ideas on finding such people. Can you give me contact information for someone who might know such people?”

4) Get people thinking about where or how to make contact

Provided you haven’t already asked this question during the interview, get your respondent to think about the places (physical or virtual) where you would be likely to find other respondents.

“If you were to find respondents, where would you go to find them?”

Advantages of the Snowball effect

The snowball effect has several advantages that we analyze in this paragraph.

Recruiting respondents in qualitative research is usually a very complex process. At this stage, the research’s very feasibility is at stake. No respondents = no interviews or focus groups.

The snowball effect is an easy-to-apply approach to increase the probability of success in the recruitment phase. This probably explains its popularity.

The only applicable method to reach “hidden” populations

The snowball effect is often the best sampling method for hidden populations. A population is said to be “hidden” when it is difficult to access when its members are little connected to other communities. These are typically populations that can be described as marginalized. The examples we cite at the end of this article illustrate the extent of this marginalization: drug addicts, the homeless, the sick, and the unemployed.

The “hidden” populations, however, are not limited to those marginalized in the negative sense of the term. At the other end of the spectrum, for example, the wealthy live in hiding and are difficult to access (see a concrete example here). A recommendation and shared contact are often essential to approaching them. In this case, the snowball effect may be the only way to build your sample.

Understand the relational dynamics within a population

Noy (2008) suggests another advantage from 2 pieces of research using the snowball effect. The first research was devoted to backpackers, the second to professional drivers in Jerusalem. In both cases, the author based himself on individual interviews with two hard-to-reach populations and reflected on what the snowball effect told him about the populations he was studying. He writes:

While I initially looked for information in the material produced in the interviews in these researches (i.e., the ‘text’), I later realized that I could learn a great deal about both backpackers and marginalized men by reflecting upon the dynamics of accessing or approaching them. It was this insight, and the interrelations that then emerged between the procedures of sampling and interviewing in these projects, that led me to re-evaluate the role of snowball sampling

Disadvantages of the Snowball effect

Before using the snowball effect technique, it is essential to understand its limitations.

Since the snowball effect is a non-probabilistic technique that relies on existing relationships between respondents, it can lead to a problem of diversity of opinions expressed. The famous adage says, “whoever is similar, gathers.” We can observe this proximity of opinion among respondents in the field.

If you ask respondents to provide information on who to interview, you may end up with a sample expressing similar opinions. This lack of diversity is necessarily a bias.

The conduct of the interview determines the result

The snowball effect, as a sampling method, is therefore potentially based partly on the quality of the human relationship you have managed to build. 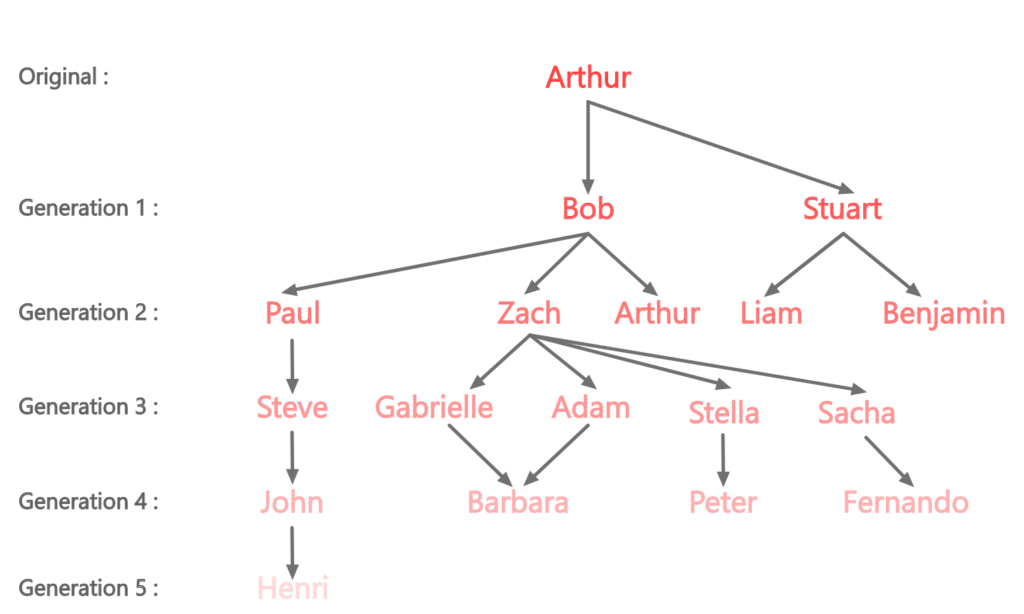 Keep track of the contacts provided via the snowball effect by making a tree like this. This will help you visualize the limits of your sampling by identifying the relationships between network members.

Unlike other sampling methods, the snowball effect leads to losing control for the person realizing the qualitative research. Indeed, the recruitment effort is “shifted” to the respondents. To account for this loss of control, it is helpful to keep a written or visual record of the recruitment process (see graph above).

Examples of using the snowball effect in qualitative research

Here are some examples of how the snowball effect is applied in qualitative research. We start by giving you some cases we have handled in our market research agency and then continue with examples from the academic literature.

Private bank customers must have a minimum amount of wealth and significant assets. Their level of wealth makes them a limited population in size. These customers also tend to be very discreet, which complicates their approach.

Therefore, the research we conducted for a central Luxembourg bank used the snowball effect to gather recommendations for approaching respondents.

We have conducted several pieces of research on the needs of visually impaired people. This population suffers from a lack of integration within society in general and the world of work in particular (see our report for the Parliament on the employment of disabled people in the administrations).

To approach these populations, we relied on the administrators of specialized online forums to obtain the contacts of potential respondents.

Examples of academic research using the snowball effect are legion:

The sampling method based on the snowball effect is a classic in qualitative research. It is particularly well suited for realizing qualitative interviews with hidden populations.
However, its ease of implementation should not make us forget its limitations. The snowball effect can lead to selection biases and a lesser diversity of opinions collected.