Are the rating scales limited to the quantitative questionnaire?

While the different types of scales are used mainly in quantitative research, they are not necessarily restricted to it. You can, of course, use them in some cases in qualitative research, for example. However, you will have to be particularly careful in doing so, since the objective of qualitative research is still to allow the respondent to express his or her views on a given subject.

Some contexts where you can use scales in qualitative research

However, the uses mentioned below remain rare. In most cases, rating scales (objective, subjective, Likert, semantic differential) are recommended in quantitative questionnaires. They allow the respondent to have a multiple choice of answers while simplifying the future analysis of the results. By imposing these so-called response elements, you avoid free field text which proves particularly laborious to process if you have a large panel of respondents.

Scales are mainly present in customer satisfaction and customer experience questions because they offer the possibility of scaling responses and analysing the different degrees of the opinion of respondents. They are often designed to investigate and measure respondents’ attitudes, perceptions, beliefs and preferences, as well as introspection.

These scales also have their place in quantitative tests related to a product or service since they make it possible to capture the respondents’ perceptions according to a given scale.

Read also
10 mistakes to avoid when drafting a quantitative questionnaire

When drawing up your quantitative questionnaire, pay particular attention to the wording and response elements proposed, especially for scale questions. They are more challenging to master than other types of closed-ended questions such as multiple-choice questions. Go over them several times and reread them with a clear mind.

We have spoken about the Likert scales in a previous article on quantitative research. However, it is essential to recall some crucial points here.

The Likert scales aim to understand the degree to which the respondent agrees or disagrees with a given statement. The Likert scale can be formulated in a variety of ways:

The 5-point Likert scale offers the same response options and adds the character of neutrality:

We strongly advise you to use the 5-point variant of the Likert scale, which is much more precise and avoids the loss of precision in the answers since the option of neutrality is offered to the respondents. In general, as you know, the 7 response options should not be exceeded so as not to overload respondents cognitively. As far as Likert scales are concerned, always give preference to odd-numbered scales.

I am satisfied with the time taken by customer services to process my complaint.

The 5-point Likert scale is particularly suitable for different types of questionnaires and combines accuracy with ease of use and analysis.

The example above is a typical example of the use of this scale in satisfaction surveys where the aim is to understand whether users or clients consider that improvements are needed:

The Likert scale can also be used to test certain consumer behaviours.

I think the application is easy to use.

The biases of the Likert scales

Likert scales are subject to two biases: that of compliance and that of social desirability.

The compliance bias is the tendency to agree with others and with the statements made. Thus, the wording (positive or negative) of comments related to the Likert scales will potentially influence respondents’ responses. The wording acts as a cognitive bias.

Here, the bias is to agree with both assertions, although they are contradictory. Thus, it is possible to propose these two assertions (one positive and one negative) in your questionnaire while spacing them out to confirm the answers given.

It is also possible to get around this bias by making both positive and negative statements (situation 1):

It is also possible to interchange the order of the answers on the scale (situation 2):

In both cases, the risk is the same since it relates to the attention respondents will pay to the questions (situation 1) or the response options (situation 2) and whether they become aware of these changes.

Note also that in these examples, the colours in the examples make it easy to visualise the associated response. However, in most cases, scales are presented neutrally in surveys (see below), which does not allow for a quick association.

It should also be noted that the use of colours or shapes should be consistent with the culture in which you wish to distribute your questionnaire.

This bias is linked to the willingness to identify with perceptions confirmed by others. Everyone will tend to respond according to what is socially accepted and considered valid. Thus, it is possible that respondents are influenced by this bias and may choose a somewhat different response option.

This bias is more significant when the identity of the respondent is revealed. Ensuring the anonymity of your respondents will therefore increase your chances of collecting accurate responses. 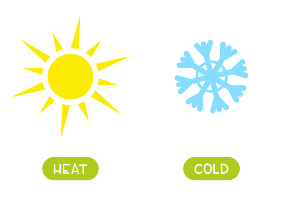 The functioning of semantic differential scales is similar to that of Likert scales. They can also be formulated with different points (from 3 to 7) as response options. Once again, we advise you to orient yourself towards an odd number of response options to allow respondents to assert their neutrality.

What does this involve?

Semantic differential scales are based on the juxtaposition of antonymous adjectives. Respondents will have to evaluate their position, attitude or perception according to these opposing terms.

My stay at the Ibis Hotel in Montpellier was:

In the example shown here, the points of the scales are not numbered, which is often the case when using semantic differential scales. There are two alternatives to this:

These scales are mainly used to define the degree related to frequency, quantity, duration and quality and thus assess customer behaviour.

What is the difference between these two rating scales?

Here is a concrete example to illustrate the difference between an objective and a subjective scale:

I buy organic fruit and vegetables:

The three types of scales that we have just presented will be beneficial when you draw up your quantitative questionnaire. When you have arrived at this stage, do not hesitate to take the time to think about each question as such and as part of the questionnaire. Testing your questionnaire with your family and friends, and acquaintances will also allow you to understand whether your wording is appropriate and will give you the results you expect. This will allow you to test whether one scale or another is more appropriate depending on the context of the question. Don’t hesitate to iterate and modify elements based on the initial feedback before distributing your questionnaire to your entire panel.