Men – Women: the battle for influence is unequal on LinkedIn

Home » Data & IT » Men – Women: the battle for influence is unequal on LinkedIn

In a first analysis, I showed that most female influencers on LinkedIn were young (18-30). Could age be a factor in the virality of LinkedIn posts? To be sure, I had to check if my first conclusions applied to men too.

A corpus of 4.6 million LinkedIn messages was used. This is the same dataset used in our research on virality factors on LinkedIn.

1118 posts were isolated, garnered more than 500 reactions (likes and comments combined), and were posted by users with less than 25,000 connections on LinkedIn. After eliminating accounts belonging to associations, 1115 accounts remained: 451 female accounts and 664 male accounts.

Each profile was visited individually, and the user’s age was estimated based on available information. Completion of the academic cycle was the most frequently used criterion for assessing age

Significant age differences between male and female influencers on LinkedIn

While for men, the age distribution is relatively homogeneous, this is not the case for women. 50.58% of female influencers are between 18 and 30 years old, while in this age group, there are only 25.58% of men. That’s twice as many.

The difference is even more glaring for the “over 50” category. Reduced to an anecdotal portion, the posts of women over 50 rarely make the buzz on LinkedIn. Only 37 (8.62%) of them can boast of having garnered at least 500 reactions. Proportionally, there are 3 times more men in this case (24.27%).

In conclusion, the difference is noticeable when it comes to the age of LinkedIn influencers. This distribution is very different from that of LinkedIn users in general. I suspect that the combination of “gender” and “age” is, in the case of women, a factor influencing the propensity to “like” posts. What is clear, however, is that age does not affect the proportion of likes or comments among women.

If we go into the details of the reactions generated, we can see that there are still glaring differences between men and women. 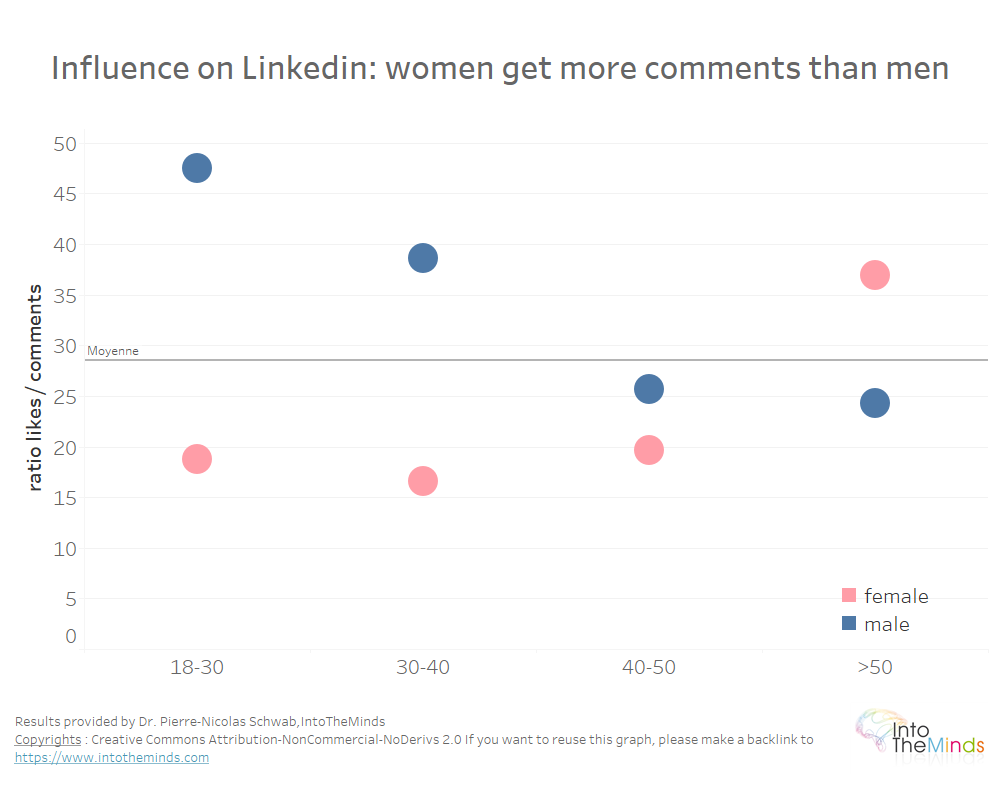 This proportion of comments should make us wonder about the nature of the engagement. Commenting is a more engaging form of a reaction than liking. Comments promote dwell time, which is the basis of LinkedIn’s algorithm. Such a difference is probably due to the content of the posts themselves. This question remains to be clarified in a future study.

However, these differences in engagement seem to be unique to the French language. A comparison of the same ratio of “likes/comments” in other languages shows that the values tend to be roughly the same regardless of gender (with the notable exception of Italian). As you can see in all the languages studied, the averages are very close. 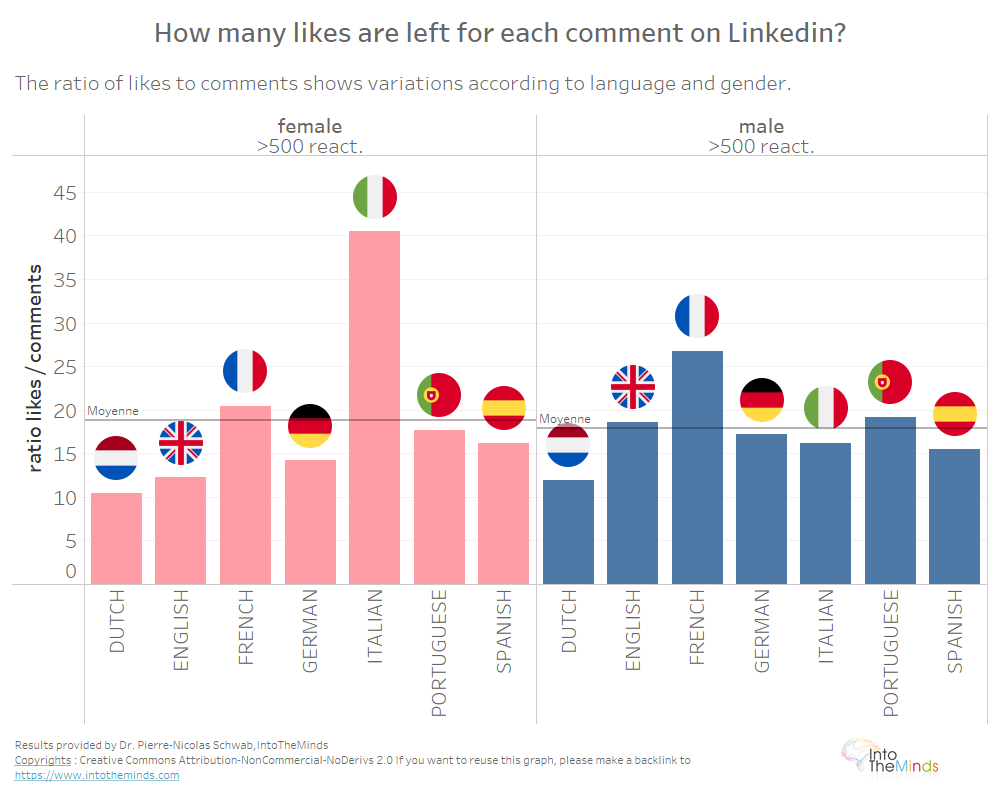 Women in general, and younger women (18-30) in particular, gather significantly more reactions on LinkedIn than their male counterparts.

My previous analysis showed that young women were the ones who gathered the most reactions on LinkedIn. Today’s analysis confirms this singularity.

The visualization below illustrates this domination. We can see that there are far fewer outliers on the male side. Except for one post, everything is relatively homogeneous. We refer you to this article for a detailed explanation of the most important posts in the “female” cloud. 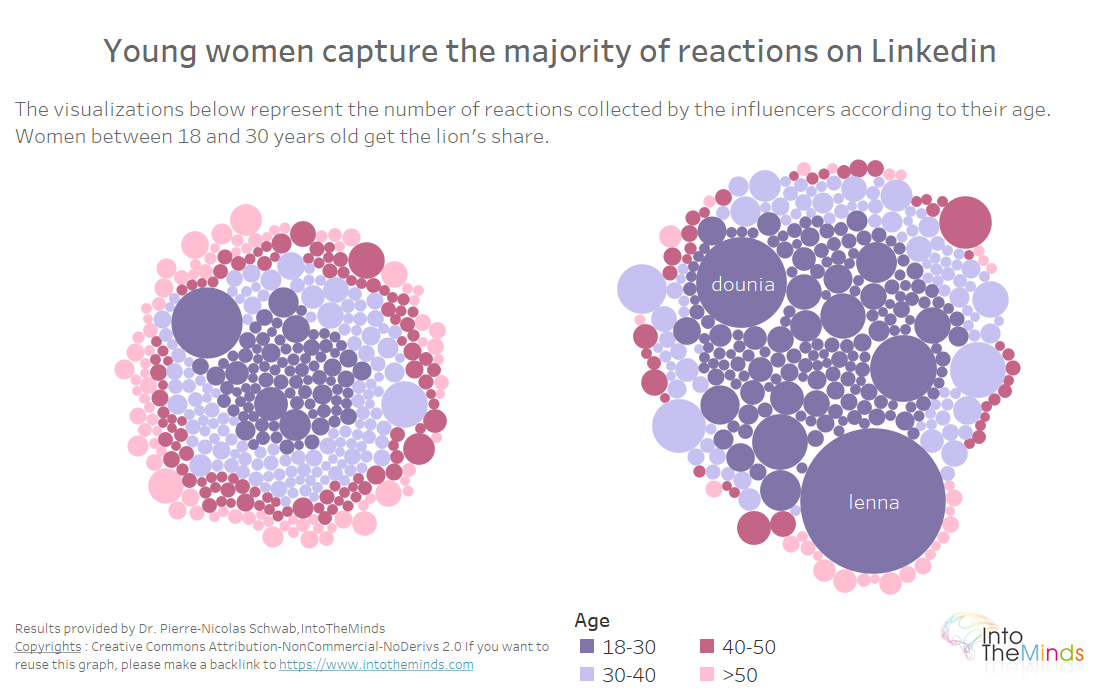 This analysis shows that significant differences exist among LinkedIn influencers influenced by gender and age. Women in general, and younger women (18-30) in particular, garner significantly more reactions on LinkedIn than their male counterparts.

Analysis of reaction types also shows notable differences. Women aged 18-30 gather 2.5 times more comments than their male counterparts, though we can’t say at this point what causes this singularity.