It’s time to resume posting. But first of all, allow me, on behalf of IntoTheMinds, to wish you a happy new year. I hope 2012 will be for you an inspired and inspirational year.

We’ll start the year with a brief post about merchandising and brand alliances. While in Rome in December and January I was surprised to see that the top-tier streets around Piazza di Spagna, home of luxury brands, were decorated and kind of “owned” by certain car brands.

Via Frattina, became the Toyota street and was decorated with the Japanese car manufacturer’s emblem. 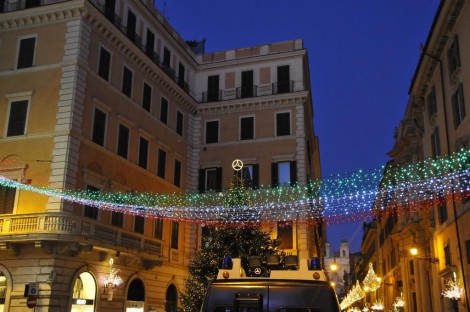 The main attraction was however to see in Via Condotti, a street parallel to Via Frattina (click here if you to see what the street looks likes in the early morning). Via Condotti was owned by Mercedes (or should I say Daimler) which had even decorated the Christmas Tree with its emblem. Mercedes made a partnership with the association of the representatives of the street. In terms of visibility one must admit that it’s very well done; Via Condotti is indeed not only attracting people around Christmas but also on Dec. 8th, the day of the celebration of the Immaculate Conception dogma, when the pope himself walks up the street.