How to get back in touch with dissatisfied mobile app users

In the last 10 years we have been in touch with many companies conducting satisfaction surveys. One thing surprised us. In many cases, these results were used for reporting purposes to the management but were not used to actually improve situation. In other words, dissatisfied customers were not contacted to understand what happened and to attempt to recover the situation.

It’s like if companies were too shy (or shameful) to do it.

Do the experiment for yourself the next time you get a satisfaction survey. Give bad scores and see what happens. Probably nothing. Your scores will be taken into account; but you, as an individual, will not get anything from the process.

This situation is very worrying. Ten or twenty years ago it was still “easy” to get dissatisfaction under control. You had only one or two channels to lodge complaints : letters (a long, long time ago) and then emails, or in person. Nowadays there are so many touchpoints that no one knows exactly where the next complaint will come from : forums, twitter, snapchat, facebook, … you name it.

It is today more difficult than ever to keep track of dissatisfaction because of those many touchpoints ; it is this therefore even more difficult (and unrealistic) to get back in touch with customers whose satisfaction is at stake.

I recently stumbled upon a very nice example of a company trying to keep the bonds with dissatisfied customers. If you have a smartphone you know how using apps can be a frustrating experience when they don’t work properly. This results usually in bad evaluations being given (that are then visible in the app store). You probably have been prompted to give such evaluations in the past. But have you ever wondered what happens if you give a bad rating to an app ? I inadvertently found out when I responded I didn’t like an app I had installed on my smartphone. The application immediately proposed to get in touch to investigate what went wrong.

I’m not sure whether the app developers would have effectively gotten back in touch with me, but I found it a very clever way to give the opportunity to dissatisfied customer to “voice” privately (via email) rather than publicly (on the App Store for instance). 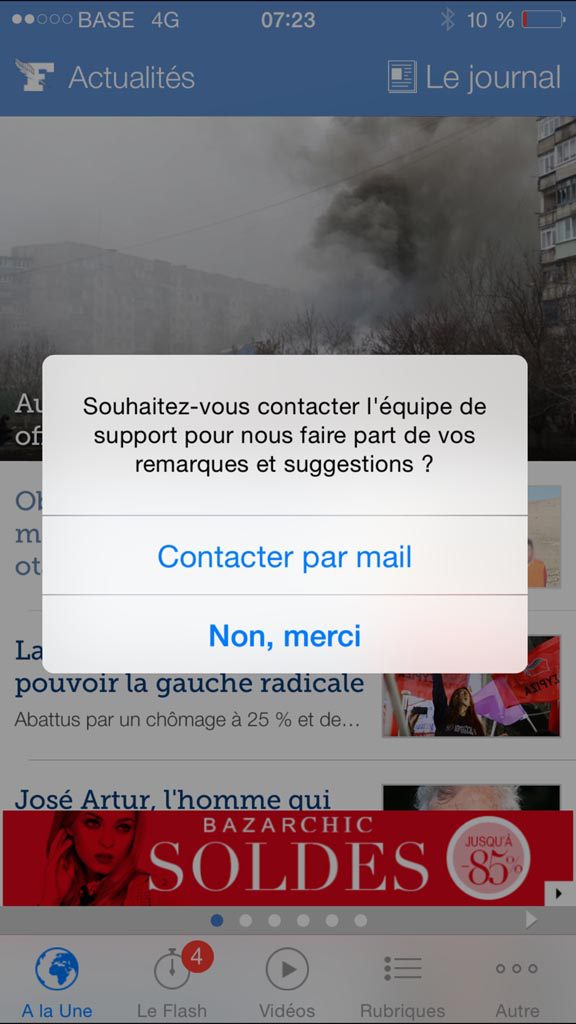