You can shop at Sephora without being disturbed

Home » Marketing » You can shop at Sephora without being disturbed

The consumer is becoming more and more independent and has less and less need for salespeople for his purchases. Sephora has understood this well and has even developed an ingenious system to ensure that customers are not disturbed. A paradox as it goes against most beliefs on the subject, that contact between salespeople and customers makes it easier to sell. But we have to admit that behaviours are changing.  Has the time come when salespeople will be expendable?

Digitisation has emancipated the consumer. The smartphone has become a remote, loyal advisor, behind whom to take refuge to face all new situations. Whether it is to choose a restaurant, check a price or decide offline to buy online (showrooming), the smartphone has become an ally. Much more comprehensive and less partisan than salespeople, it is privileged in many situations and allows consumers to make their choices. It is also involved in the transformation of the retail sector, which is under pressure on margins. It makes it possible to replace salespeople and simplifies the generalisation of independent customer itineraries.

Cashiers are disappearing in favour of self-scanning solutions, and autonomous stores (like Amazon Go) are expanding. Human contact in points of sale is, therefore gradually vanishing, and customers do not seem to be complaining. Sales staff appear to be a factor slowing down the purchasing process. The consumer in search of efficiency will, therefore, naturally avoid salespeople.

This quest for autonomy and efficiency, the rejection of sales pressure, are undoubtedly some of the factors that have pushed Sephora to innovate. The photo taken by a twitter subscriber in an unidentified Sephora store shows two types of shopping baskets: red baskets indicate to the salespeople that you would like assistance, black baskets that you would like to do your shopping without being disturbed. In doing so, Sephora meets the needs of a specific category of customers (see in particular the analysis below) but asks another series of questions. Indeed, this system deprives salespeople of all freedom of initiative and penalises them. Without exaggeration, we can consider that the choice imposed on the customer also affects the salesperson, who loses part of his or her purpose. 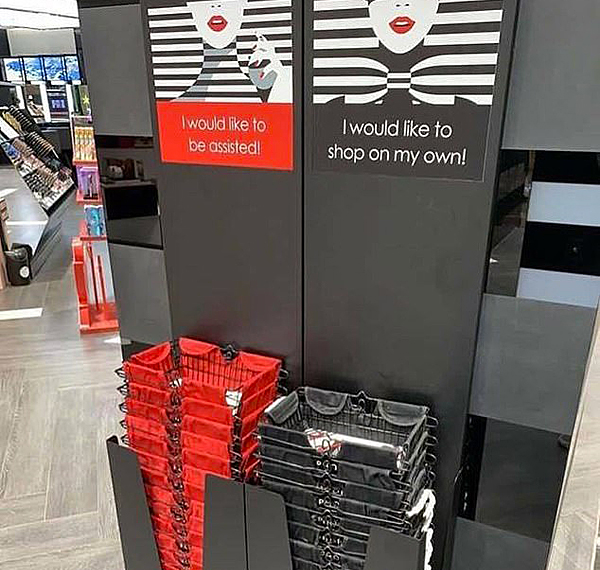 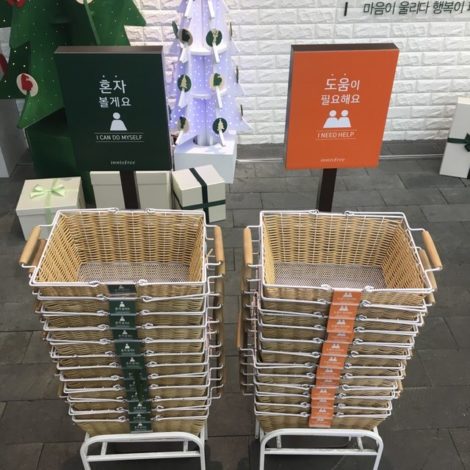 Innisfree, a Korean beauty chain, apparently preceded Sephora as from 2016 a photo appeared on Reddit showing a similar initiative.

Market research: what do we know about in-store behaviors?

Delacroix and Guillard also talk about a “relational cost” when meeting a salesperson and a preference, for customers suffering from social anxiety, neutral and distant relationships.

Other studies, such as Musgrove’s (2011), have investigated specific situations within outlets. Thus, the presence of salespeople at the entrance of a store creates a feeling of pressure on customers who enter. This negatively affects the pleasure and enjoyment of customers. Musgrove’s study is actually a whole PhD thesis which I’ve included below for your convenience.

Finally, Haas and Kenning (2014) studied a more general behavioural model, in which the client’s consultation with the salesperson is based on both situational and individual elements. In this way, they give a clear picture of what drives the customer to approach the salesperson.