I’ve completed a Design Thinking bootcamp in Amsterdam where participants were challenged by the City of Amsterdam to find solutions around a series of waste-related issues (follow this link to learn more about Design Thinking). On this occasion I had multiple opportunities to find out how design influences consumer behavior.

Field research in the city of Amsterdam

On the first day of the week, during field research, we went in the streets of Amsterdam to better get to know the problem. One of the things that stroke us most, was the presence of waste of all size on the streets : sofas, furniture, matrasses … all kind of rubbish that seemed to have been dumped there waiting for an improbable someone to collect them. Although the city of Amsterdam has collecting containers every 150m or so, we were also shocked to see rubbish bags accumulating in the streets. In Amsterdam, ca. 80% of the inhabitants are expected to bring their waste to the containers (the other 20% live in areas where the installation of such containers is not possible because of lack of space). Yet, many don’t comply to rules.

How to reduce waste in Amsterdam

The underlying question (and the challenged posed by the City of Amsterdam) was to understand why people don’t comply to those rules and what was needed to change those habits. The purpose of this post is certainly not to share all our findings (I’ll do that in other posts) but to draw your attention on one striking paradox (see picture below). I’m sure you’re familiar with that kind of paradox : waste bags in front of a sign forbidding garbage dump. 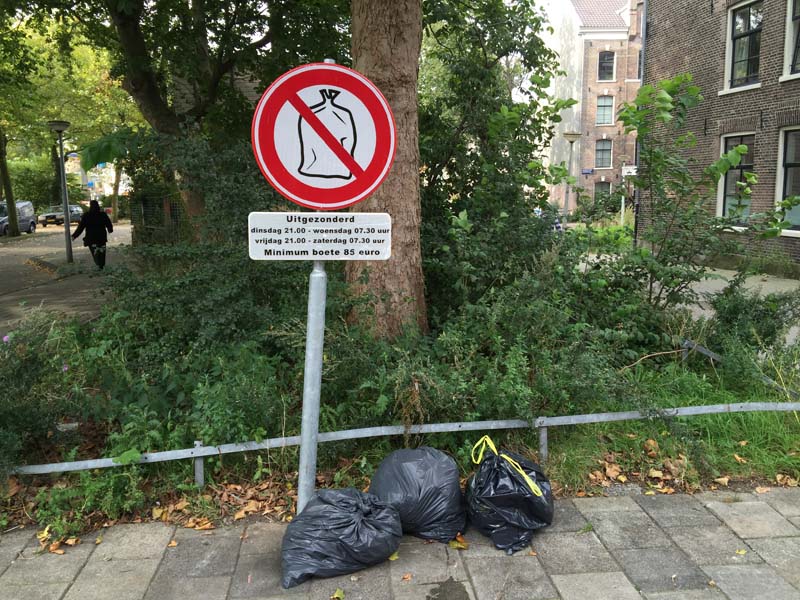 Besides the usual societal explanations, what I think is that it is also the cause of a failed design. Look at this sign. It’s forbidding to dump garbage except between given time periods. Obviously, this kind of message is confusing and can’t lead to proper consumer behavior because it forbids and allows at the same time. This reminds me very much of this famous case of an Israeli kindergarten that required parents to pick up their children before a given hour, and then introduced a (paying) exception : those who’d come later would pay a fee. What happened is that all parents profited from this exception and preferred paying rather than pick up their children on time. That’s really what I call failure by design. To learn more about the day care center experiment in Haifa, read this article or access directly the corresponding academic paper.

Design is extremely important to make sure people do what you want them to do. I’m not saying this having evil ideas in mind. I’m just saying this because it’s important, for the Greater Good, to make sure people behave in homogeneous ways and do what the Society expect them to do. In that sense Design Thinking is a good discipline to help you research what the pains are and find innovative solutions through design.