M&M’s and wokism: analysis of the disappearance of the mascots

Home » Marketing » M&M’s and wokism: analysis of the disappearance of the mascots

M&M’s has just announced that it will withdraw its famous characters indefinitely. Accused of wokism by the American conservative right (Fox News), it is an important part of the “storytelling” of M&M’s that disappears. These little characters that made the brand’s success and humanized it are now part of the past. In this article, I briefly go back over this affair and give you my analysis. It is an opportunity for me to address the global subject of polarization and the risks incurred by brands in an increasingly fragmented society.

M&M’s and wokism: a look back at the purple M&M case

On January 23, 2023, M&M’s announced in a tweet (below) to give up the use of its ultra-famous chocolate candy characters. The fault of the purple M&M’s, which appeared in 2022, is supposed to symbolize the LGBTQ+ community.

This arrival has aroused the ire of conservative currents and especially Fox News. The attacks by its star presenter Tucker Carlson forced M&M’s to back down and suspend the use of its little characters accused of wokism.

This case shows that brands risk a lot when they venture on too “connoted” grounds. But why did M&M’s think it had to create a character (“Purple”) to symbolize the LGBTQ+ community? 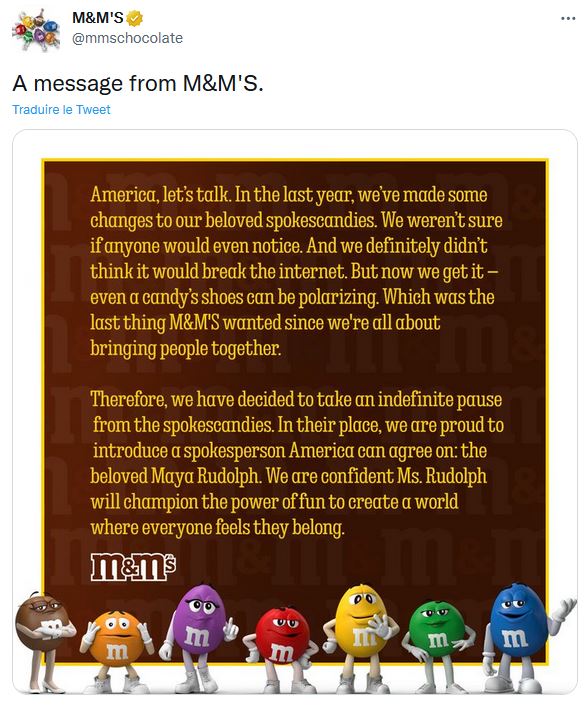 In 2017, research in the United States showed that 64% of customers close to LGBT values said they wanted to favor brands adopting the same marketing positioning. As brands are, by definition, looking to conquer the most market share, “pinkwashing” was inevitable.

In 2018, Google briefly adorned its logo with the colors of the LGBT flag.

To contextualize this trend, here is the evolution of searches for “LGBT” since 2004 in Google. You don’t have to be a statistician to see the upward trend.

Under the combined effect of the “well-meaning ” and “wokism,” brands had to show a “white patina” and display values compatible with this trend. Countless advertising campaigns include LGBT-compatible visuals or narratives.

Some brands like Google and Gap support the cause by temporarily changing their logo. Others, such as Revolut, are including a limited edition of a product from their line. Still, others include elements in their narrative that connect them to the LGBT community
. 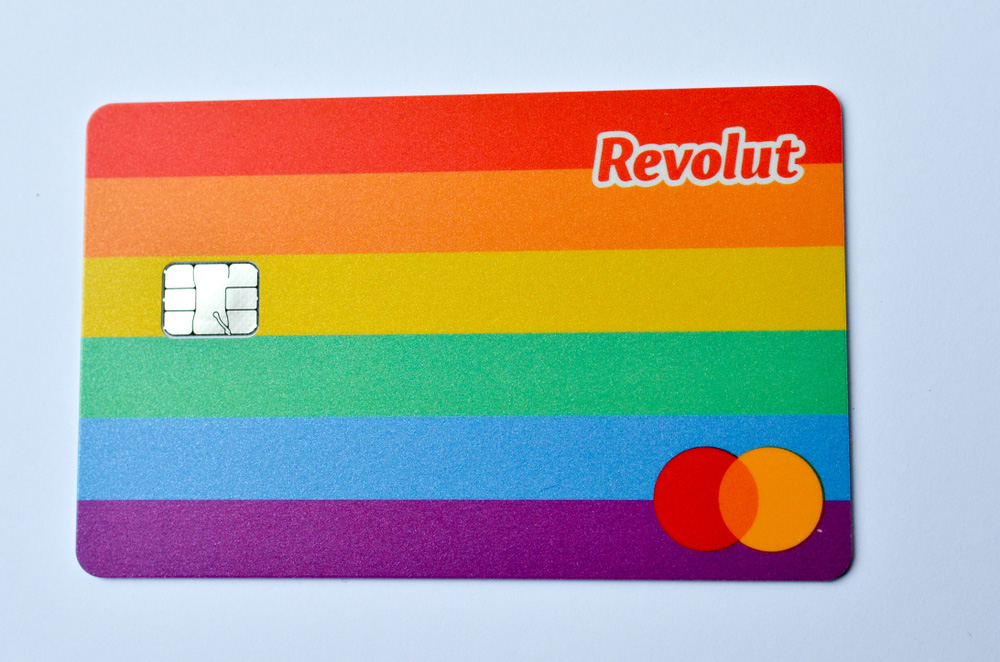 The degrees of involvement are diverse. There are militant brands and others that show more cautious support. However, ignoring communication is no longer an option. In these top 10 LGBT ads, we find various creative possibilities. What is certain is that the LBGTQ+ community is waiting for positions beyond the logo change. Timid support is no longer perceived as sufficient, and expectations are getting higher as the years go by. From now on, it is an active or permanent militancy that is expected to attract the favor of this public, spending on average 7% more than a normal customer.

Problems are likely to arise when support becomes permanent. That is when support for the LGBT community becomes an integral part of the brand identity. This is likely what happened with M&M’s
.

Brands are becoming the voice of civil society in defense of individual rights.

Analysis of the M&M’s affair

The question remains as to why visual elements as insignificant as M&M’s characters could fuel such a debate across the Atlantic. The answer must first be sought in the symbolism of these little characters. They are part of American culture and are symbols. Remember that they are proudly displayed in Time Square, for example. They are as much a part of popular culture as Ronald McDonald. Imagine the outcry if McDonald’s decided that Ronald was gay… 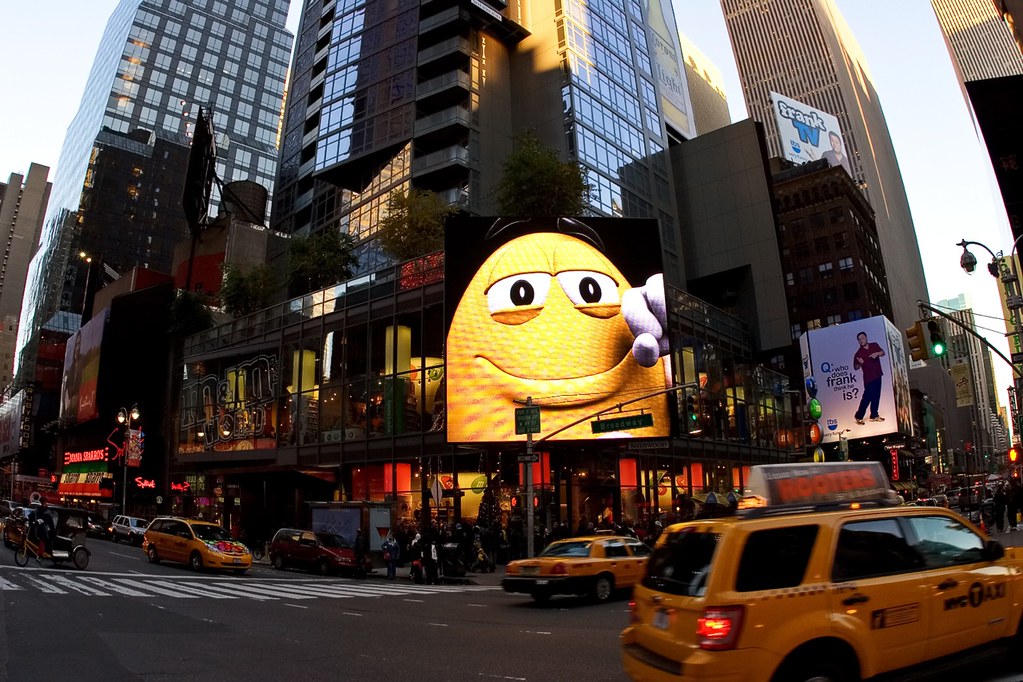 The M&M’s characters are displayed in a big way in Time Square in New York. Credits: sriram bala via Flickr

By expanding the family of M&M’s characters to represent all the “colors” of society, she is indirectly advocating wokism. The latter is perceived as a threat by conservatives, who see it as an attack on the very foundations of American society. It is, therefore, natural that the most virulent right-wing (Tucker Carlson) attacked it.

Ultimately, why did the Mars Wrigley Group (owner of the M&M’s brand) give up? Simply because of financial calculations. It is better to lose the support of the LGBTQ+ community than that of the much more numerous American conservatives. So values are sacrificed on the altar of profits.

In a context of growing polarization, this also heralds a turning point for branding. Managing a brand becomes a balancing act. Every position taken becomes a risk. We risk ending up with much more bland brand DNAs, far from the extremes of Benetton in the 20th century under Olivieiro Toscani (and far from other extremes I’ve written about here).

In Japan this GAP store has displayed LGBT colors on its logo.

Polarization of opinions in branding

By trying to please everyone at all costs, you are bound to attract enmity. This is exactly what happened to M&M’s in a context of polarized opinion. In a country, the United States, where freedom of speech is a totem (first amendment of the constitution), social networks have contributed to the liberation of speech and the expression of extreme opinions. This polarization is reflected in violent diatribes that no longer spare the official media in search of sensationalism. Fox News, the source of the M&M’s affair, is one of those media that propagate revolutionary ideas.

The LGBTQ+ movement and all it represents in the eyes of conservatives crystallizes this polarization. So much so that 200 brands had to sign a pamphlet to oppose anti-LGBTQ+ laws in Texas. Brands are thus becoming the voice of civil society in defense of individual rights. This is quite symptomatic of the role brands would like to play. Branding is now a more complex technical matter that is wider than marketing positioning elements. There is now a societal positioning and, therefore, risk-taking. And when there is risk-taking, there are potential problems.

Polarizing reactions can also be beneficial to brands

Research from 2019 explored the universe of brands subject to polarization. Based on a qualitative methodology (individual interviews), the research concludes that:

While polarization and virulent reactions can be scary at first glance, it is important to remember that gaining attention (from the media and customers) is a beneficial consequence of buzz, positive or negative. Not only does brand awareness increase, but also a certain community of consumer supporters can emerge, which can have a significant positive effect. Without suggesting that brands should maintain the anathema, it is necessary to remember that the repercussions can be positive in the short term.