Succeed in your marketing mix, and follow Lego’s example!

The marketing mix of each company must be carefully defined. Indeed, it is the concrete application of the structure’s marketing positioning. The right mix is the one that ensures an effective differentiation from your competitors! We propose here, an example of Marketing Mix: that of Lego. To do this, we will go beyond the traditional 4Ps: here are the 7Ps of the Danish company’s mix.

Lego, a historical player in the toy industry

This company, founded in 1932 in Billund (Denmark), celebrated its 90th anniversary last April! Its founder, Ole Kirk Christiansen, was quick to point out his leitmotiv: to stimulate the creative spirit of children.

After a slump that led to a 175-million-euro budget deficit in 2003, Lego has since bounced back. The number 1 toy company recorded a record turnover in 2020: 3.09 billion euros. That’s almost 5 times more than Playmobil, one of its main competitors.

Today, Lego is going green. To this end, the group promised in late 2020 an unprecedented investment. We are talking about 400 million dollars to accelerate its environmental efforts. This could well sound like the death knell for plastic Lego.

The diversification of Lego products

Today, Lego is much more than a simple toy manufacturer. Over the years, the group has been exemplary in its marketing mix by opting for mass diversification. Its product range now extends over several strategic segments.

Of course, we find construction games their historical value proposition. However, the brand has been able to build collaborations of all kinds with other big names in the global entertainment market. This has led to partnerships with Adidas, IKEA, and Levi’s.

But that’s not all: Lego has also earned a place of choice in the video game and film markets: 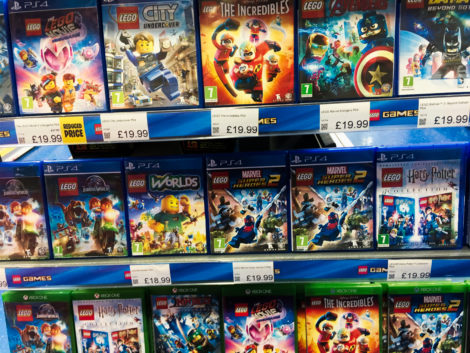 The video game section of supermarkets is invaded by Lego (source: Shutterstock)

As for pricing, Lego has opted for two pricing strategies. They are both cost and margin oriented and competitive. Thus, Lego displays medium-high prices for production costs and quality control. At present, its range of toys is wide, and this is reflected in the prices. They range from 2.49 euros for the Brick Separator to 800 euros for the Star Wars Millennium Falcon.

In addition, Lego differentiates itself through its discount system, an effective way to build customer loyalty. In this spirit, Lego has adopted two key measures:

Lego and its ingenuity: simply exemplary!

Lego’s communication is, without a doubt, the most telling example of its marketing mix. It could be summarized in one word: sprawling. Just like for the development of its products, Lego wants to be present in as many niches as possible.

The creative character of Lego is also felt in its outdoor advertising. In this sense, the Danish structure appropriates the surroundings of the advertising space to create unique visuals. By collaborating with major brands, Lego increases its awareness by communicating hand in hand with its partners.

Lego can never suffer from a lack of inspiration. The manufacturer has understood this. It has been able to maintain a solid base of consumers, both loyal and inventive. That’s why Lego launched its LEGO IDEAS website, a pioneer in collaborative marketing. Since then, other brands, such as La Casa De Papel, have adopted the principle for their content creation.

Its various distribution channels are sources of improvement

Lego is present on all continents. This can be seen both through physical sales outlets and through e-commerce.

As far as physical distribution is concerned, the Danish giant has its commercial surfaces. The brand can then proceed to direct distribution. As a result, Lego has an important competitive advantage: the massive collection of consumer data. Thanks to this data, the toymaker has improved its market penetration by about 25%. This is an opportunity not to be missed to fine-tune the customer experience.

In addition to this distribution channel, Lego has the luxury of selling its products from third-party sales outlets. Indeed, the brand masters the art of merchandising. Its range can therefore be found in amusement parks, cinemas, or large stores aimed at a young public.

Personal relationships are essential for Lego

Secondly, Lego’s main relational strength is its employees. Anyone who wants to work for this toy company must meet several criteria. Diversity is one of these criteria, so the staff is rich in various academic and socio-economic backgrounds.

Lego made this choice, given customer-employee interactions, to improve the quality of service provided to the customer. Because Lego has a global presence, it needs to employ people who embody this globalized and heterogeneous brand image.

In addition, Lego makes a point of recruiting according to the candidates’ values. This applies to both customer-facing staff and managers, for example. The company makes these values explicit: “energetic and positive people keen to work with children.” Thus, Lego believes that an effective company is one in which everyone is passionate and involved. Another example of a marketing mix done right. 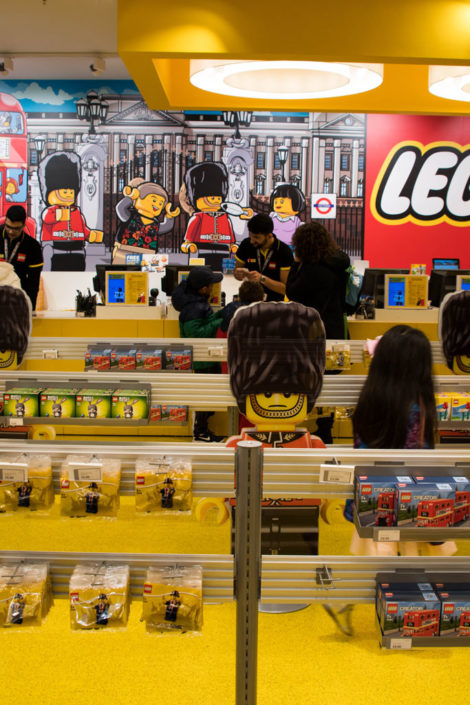 At the Lego Store in London, employees pass on their passion for toys

At Lego, we personalize as much as possible

The Lego experience is unique because it is highly customizable. As mentioned in the relationship axis, employees adhere to Lego’s values, and their employer allows them a certain amount of freedom. The processes here are anything but standardized, as the group’s former CEO himself says:

I want people to surprise me. I don’t want a place where people do what they’ve been told to do because it creates fear.

“Only the best is good enough”: this is one of the mottos of the Lego Group. It speaks volumes about the brand’s focus on customer satisfaction. For example, this has become apparent with the advent of digital technology. They can be claimed online if technical instructions are forgotten in Lego toy boxes.

Finally, let’s look at the physical presence of the brand. Lego is successfully established in 130 countries, with 170 physical sales outlets and 9 Legoland parks!

Let’s take, for example, the Lego Store in New York: a typical case of an experiential place. Here, everything is designed to encourage the act of buying. The Lego construction of the Big Apple Store has nearly 900,000 bricks! First, how better to embody the Lego brand than with a monumental realization made of Lego?

Also, this sales outlet is a place of innovation. It allows its visitors to get a self-portrait designed with Lego. This offer, which can only be realized in a physical store, is an unbeatable added value. Finally, the Lego Brick Lab of this store proposes a very playful phygital experience. It offers the opportunity to transform any real-life object into a digital construction.