Lidl sneakers, Lidl socks, beach shoes in the bright colours of the German brand have made the buzz at the end of this year 2020 in France. On Sunday 27th December 2020, a wind of madness blew through the Lidl shops all over France on Twitter. The genuine storm Bella gave way to a marketing storm that we analyse in this article.

Lidl Sneakers: out of stock in a few minutes 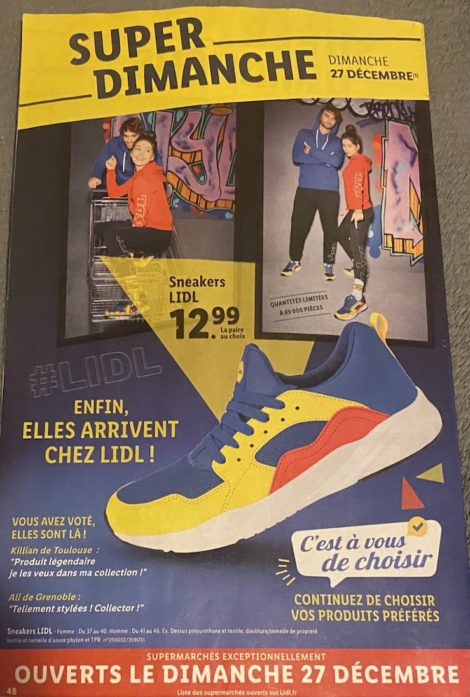 On Sunday 27th December 2020, Lidl shops in France put on sale collector’s items: trainers, socks and beach shoes in the German brand’s colours. Far from being satisfied with bright colours and a style that would have repelled many, the German retailer had even gone so far as to put the name of its brand in giant characters on its flip flops and socks. Thus, the customer became a sandwich man (or woman) to Lidl’s marketing department’s delight, which closed the year 2020 with a free advertising campaign. And what a campaign!

Customers fought to stock Lidl branded products. Tweets followed one another to the point of making the #Lidl hashtag one of the trends of the day. This buzz on the Twittersphere had been well prepared by Lidl’s marketing teams who had cleverly made the hashtag appear on their advertisements (see image opposite).

The result probably exceeded all their expectations (see video below).

It remains to be seen what the driving forces behind this craze are.

How can we explain the success of Lidl sneakers in France? 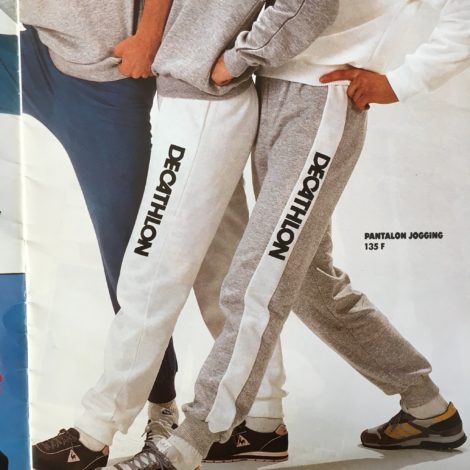 Of course, we would like this marketing operation to find its roots in a feeling of nostalgia as was the case with the re-release of vintage products by Decathlon. Thus, we will remember the success of the 1000 copies of its Jog 85 jogging trousers (see photo opposite), or his Kalenji Revival Jog sneakers in 3000 copies. I am afraid that in the case of Lidl, the enthusiasm observed is motivated by something completely different.

Just as Decathlon’s reissues were still “wearable” today (if I may use that expression), so Lidl’s sneakers (and its by-products such as flip flops and socks) evoke a feeling of repulsion that does not spare the colour-blind. Because let’s face it, they are ugly. And this is perhaps the first reason for this craze.

Ugly is the new beautiful.

Lidl Sneakers: a product of the counter-culture 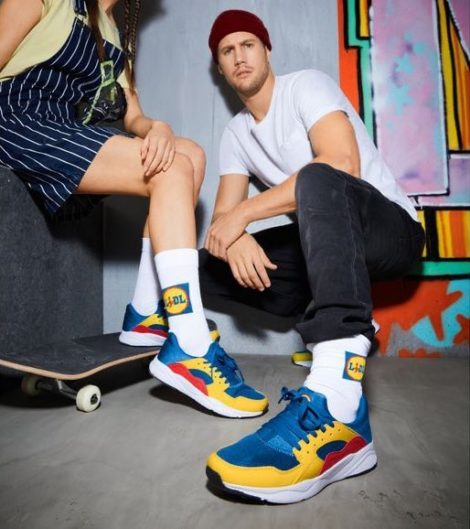 Lidl sneakers are a kind of product of the counter-culture. Differentiation is not only a concept that applies to companies. It is the basis for the construction of the identity of individuals. In this respect, the counter-culture, often carried by rebellious youth, is essential to understand the marketing drive behind Lidl’s success.

The poster opposite is not misleading. The message conveyed is that of a product worn by youngsters, a trendy product, so cool (Jack Lang, are you there?). This advertisement’s universe is there to recall a product’s codes in adequacy with its time: skateboard, hat, graffiti. Therefore, Lidl’s ugly sneakers break with the aesthetic canons, and that’s why the product must be adopted. To those who would mock these sneakers in schoolyards or skate parks, we can retort that others before us (and not the least cool ones) displayed themselves with “ugly shoes”.

Perhaps a sneaker retailer could consider customizing Pins, Patches, etc. with the company logo and youth trends on GS’s website, and put them in the hands of consumers in the form of freebies that accompany shoe sales. These things can be placed on shoelaces, uppers and socks, catering to and showing young people’s aesthetic standards and cultural attitudes, enhancing the fashion of a single product.

We can still ask ourselves a few questions about the buyers’ profile and their real motivations on closer inspection… Indeed, those who are seen rushing to buy Lidl sneakers don’t have much in common with the skateboarders who proudly display themselves in blue-yellow-red on the above advertisement. It looks more like the parents and grandparents of these youngsters are stocking up on sneakers, flip flops and pairs of socks. Are these emergency purchases to be put under a tree that is already losing its needles? I’m afraid the answer is much less glamorous than that. What drives all these customers to rob the shelves of their favourite Lidl shop is the lure of gain.

Indeed, let’s remember that the Lidl sneakers arrived in France with a reputation that has crossed the borders. Those who had been able to buy these products in a limited edition in Germany first, then in Belgium in July 2020, had made comfortable profits by reselling the acquired pairs that cost them €12,99. Second-hand sites were then full of offers, each one more hysterical than the last. This consumerist madness led to a sort of speculative bubble which had caused some pairs to sell for more than €1,000. Faced with such a phenomenon, how can we fail to remember the speculative bubble of 1637 on tulip bulbs. In the meantime, Lidl trainers are available without restriction on the Belgian website of the German distributor. So, there is no longer any shortage, and the prospects for profits are therefore lower than ever.

It pains me to say it, but this consumerist fire, fuelled by an excellent marketing department at Lidl, reveals all the weaknesses of our world. In the end, the factors that explain this frenzy are twofold:

What is the conclusion of this Christmas tale for Lidl: some people will have to make up their minds to wear the pairs of flip flops on the beach this summer (and for the next 10 summers) that they have not managed to resell.