Have black boxes led to bankruptcies in the restaurant industry ?

Home » Marketing » Have black boxes led to bankruptcies in the restaurant industry ?

Back in 2015 Belgian authorities announced that B2C firms selling more than 25000€ per year in food (restaurants thus), would have to be equipped by July 2016 with a new model of cash register containing a black box registering all transactions. This, the authorities said, would put a stop to black money transactions.
The restaurant industry reacted harshly and claimed that this measure would lead to massive bankruptcies, the reason being that the this sector was surviving on black money. It was indeed no secret that it made massive use of black money to pay employees, extra hours that would otherwise be much more expensive to pay. I wrote an article at that time claiming that being profitable in the restaurant sector while being clean was possible (this article still remains one of the most read).

Black boxes have been compulsory for 18 months now and we thought it was time to have a look at the sector’s prophecy of massive bankruptcies. Was has happened ?

Belgium Bankruptcy data of the past 12 years

We downloaded bankruptcy data from the last 12 years on the website of the national statistics institute (Statbel) to have a quick look at the trends.
In the graph below you can see two curves : 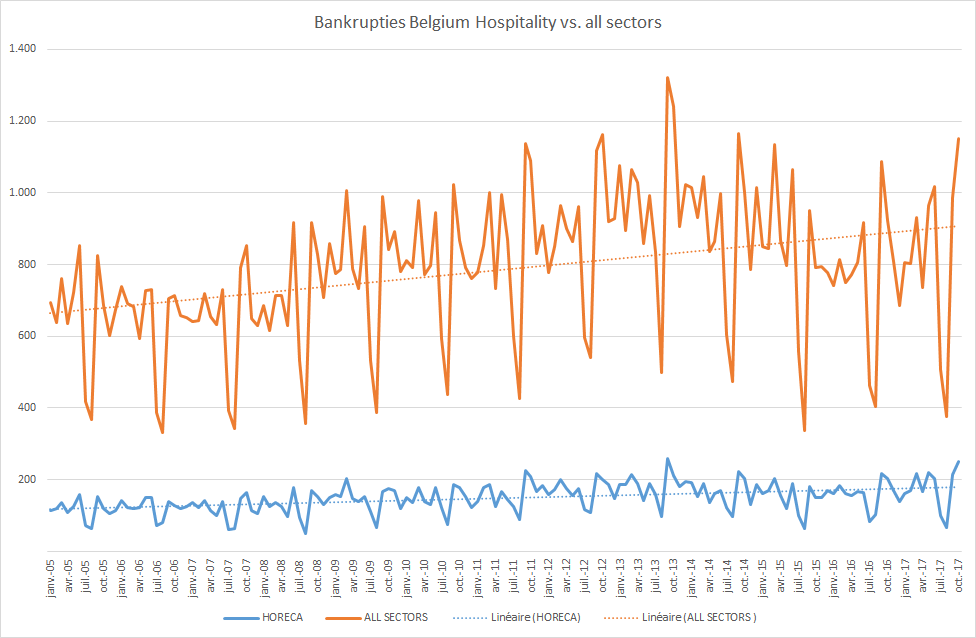 The effect of black boxes on bankruptcies in the restaurant industry

Just from looking at the graphs you can tell there is an upward trend over the years. Indeed, from 2008, you can clearly see the effect of the financial crisis on bankruptcies in all sectors. Around 2015 it seems to slightly go down.
For the restaurant sector there is also an upward trend but the slope of the curve is lower than for all sectors together.
Moreover, from mid-2016 (the date the new cash registers became compulsory) you can’t really see any particular increase in the number of bankruptcies in the sector.

In conclusion, official figures don’t show at this moment any particular effect of black boxes on bankruptcies in Belgium. At this point the fear expressed by representatives of the sector can’t therefore be confirmed