As you all know the purpose of behavioral economics has been to show how irrational consumers’ behaviors can be as opposed to the assumption of rationality from the economics field. This has resulted for instance in nudges as a sub-discipline (see an example of nudge here and another there).
In today’s article we’d like to explain the results of an amazing academic study by Dan Kahan (read the whole paper here) which was cited in George Lowenstein’s keynote at the 2017 RecSys conference.
Let me first state this. The Kahan paper is one of the most exciting piece of research I’ve read in the last decade. The results are powerful, yet simple to understand and crucial for our planet. I thought it was my duty to make them available to you.

How to communicate on Science ? What do people understand of scientific results and how does it influence how they respond to the great challenges faced by our planet ? This is the central topic of this paper, one that shows that how people answer to scientific question is not only a matter of how intelligent they are.

How is it possible that so many Americans still don’t believe in such well-proven theories. As Kahan stresses, the study by Cook et al. (2013) concluded that 97.1% of 12000 peer-reviewed articles endorsed the theory that Humans caused global warming.
This, Kahan writes, “is the most spectacular science communication failure of our day”.

To find out more about may cause so many people to disbelieve well proven theories like evolution and global warming, Kahan measured the likelihood of correct answers to scientific questions along an ordinary science intelligence scale (OSI). The results are shown below

Not unsurprinzingly, the higher the OSI, the higher the likelihood to give a correct answer. Some questions however show skewed distribution, i.e. the question is difficult and requires superior OSI (see for instance the probability that a woman tested positive in a routine mamography has cancer). 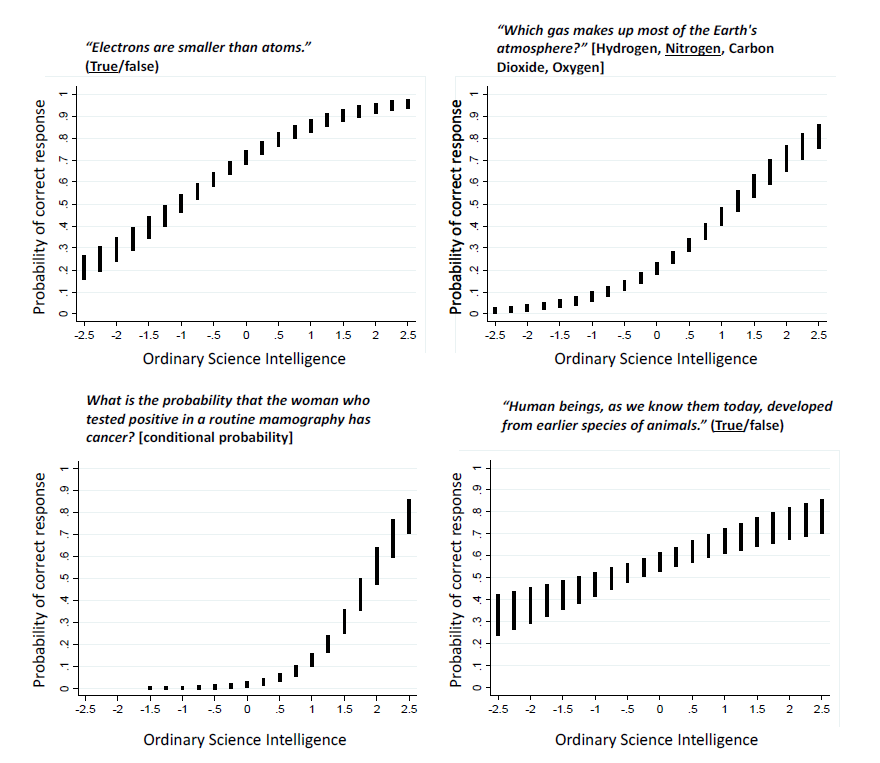 How does likelihood of correct answer vary when controlling for beliefs

In a next step Kahan controlled for religious beliefs and assessed the likelihood of correct answer.
Results show no significant difference except for the question on natural evolution. As Kahan notes

“the predicted probability of giving the correct answer does not increase as individuals display a higher degree of science comprehension. On the contrary, it trends slightly downward, suggesting that religious individuals highest in OSI are even more likely to get the question “wrong.”

This doesn’t prove any correlation between OSI and reliogisity. rather it invalidates this question as a valid measure of OSI among the population. 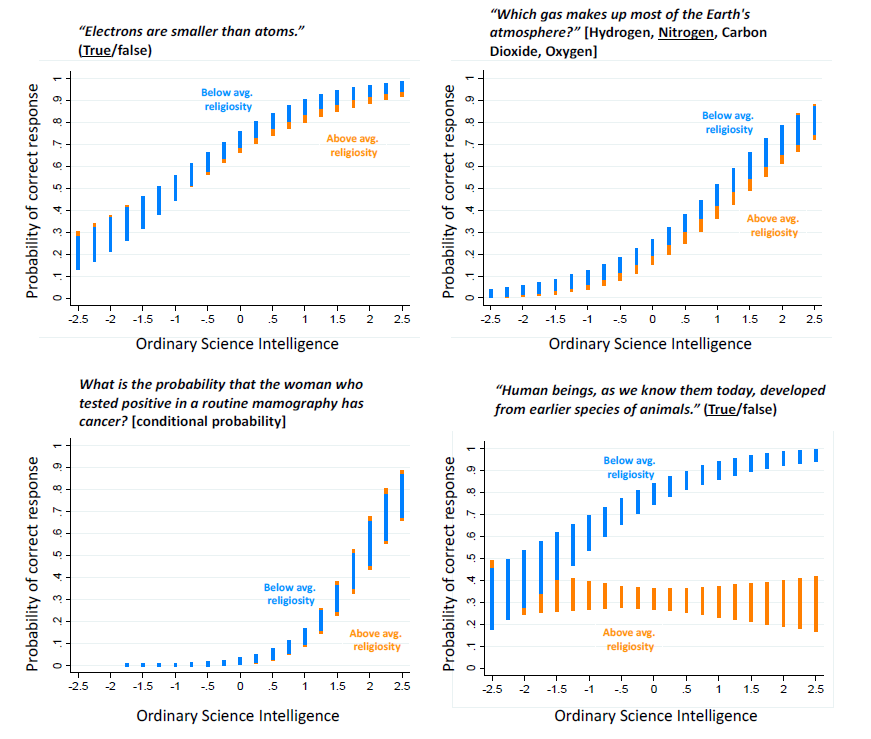 Kahan then proves, in a summingly elegant experiment, that the answer to the above question is purely resulting from beliefs, not from intelligence. By adding 6 words to the question he completely disentangles the intelligence and religiosity aspects. The question asked becomes “According to the theory of evolution, human beings, as we know them today, developed from earlier species of animals.”
As you can see from the graph on the right-hand side differences vanish.

Here comes perhaps the most interesting part of the study (the most striking one at least).
Kahan repeats the experiment by controlling on political opinions and asked the question on the relationship between global warming and human activity
As you can see there is once again a very noticeable downward trend among Republicans with the highest OSI to refute the hypothesis that global warming is caused by Human activity. This is irrational yet completely real.

Kahan concludes with these illuminating words :

Those whose cultural commitments predispose them to be concerned about climate change become even more so as their level of science comprehension increases. Those whose commitments predispose them to be less concerned become all the more skeptical. Far from increasing the likelihood that individuals will agree that human activity is causing climate change, higher science comprehension just makes the re-sponse that a person gives to a “global warming belief” item an even more reliable indicator of who he or she is.

What can education do against ill-formed beliefs ?

Of course this whole study, as brilliant as it may be, who be useless if the question wasn’t raised about how to better educate people to avoid such misconceptions.
Religions are thousands of years old. “highly religious students are not likely to change their belief in special creation as a consequence of relative brief lessons on evolution” Kahan writes. The solution comes further down :

Thus, the primary aims of the lesson should not be to convince students of one belief or another, but, instead, to help students (a) gain a better understanding of how scientists compare alternative hypotheses, their predicated consequences, and the evidence to arrive at belief and (b) acquire skill in the use of this important reasoning pattern—a pattern that appears to be necessary for independent learning and critical thought.

Conclusion : it’s all about critical thinking

Critical thinking is key to counterbalance the effects of beliefs.
Massively communicating over scientif evidence doesn’t help as Kahan shows, plotting the publications of important scientific studies proving global warming against survey results of the general opinion. As you can see, between 2003 and 2013, the more scientific studies were published that proved man-made global warming, the less Americans believed in it. 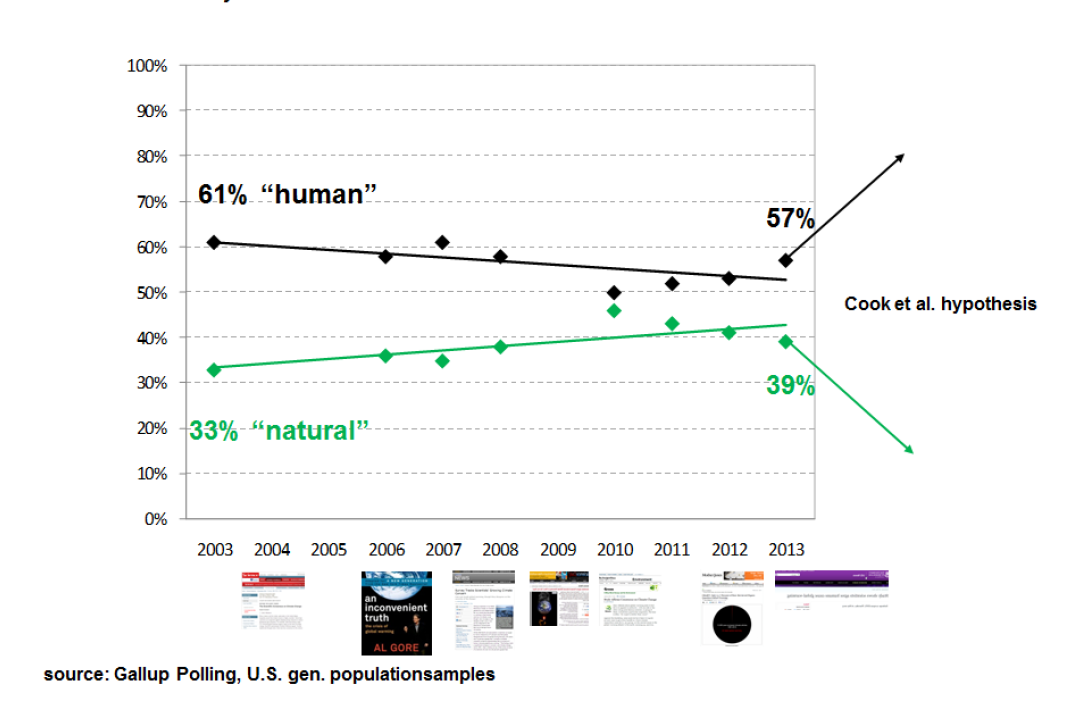 This conclusion, while terribly frustrating, gives me also a lot of hope for educating people on some newer topics for which people don’t have yet an opinion : artiificial intelligence, Big Data and algorithms. As I explained in another article on this blog, I pitched the Eurovision Academy members to join in a global initiative to educate people on these matters. Knowing that critical reasonning is instrumental, I’ll certainly prepare a plan to take this into account to maximize the odds of succeeding.