Pedemontana: the worst user experience in the world

Home » Marketing » Pedemontana: the worst user experience in the world

User experience (or UX) has become a discipline in its own right with the digitalization of our lives. But it does not only apply to online environments. The Italian highway A36, also called “Pedemontana,” offers an example of a catastrophic user experience in the real and digital worlds. Those who designed this highway seem to have wanted to bring together all the worst things in terms of transparency, ease of use, and ease of payment. The resulting catastrophic customer experience leads to maximum customer dissatisfaction that spills onto social networks. The company in charge (Autostrade Pedemontana Lombardia) seems to pay no attention.

La Pedemontana: understand everything about the world’s worst UX in 30 seconds

Pedemontana: a highway without barriers

Usually, a toll highway looks like this. You stop (or slow down if you have a Tele pass) to pay at some point. Since its creation, the barrier and the stopping of the vehicle to pay have been characteristic of the toll highway.

But not on the Pedemontana. This highway, also called A36, located in Lombardy, was opened in 2015. It was designed with a “free flow” payment system without barriers. It is, therefore, up to the user to make, after the fact, all the steps to pay. And that’s where the problem lies. Not only is the signalization not very explicit (see below), but the payment system is so complicated that one might think it is designed to trick users. 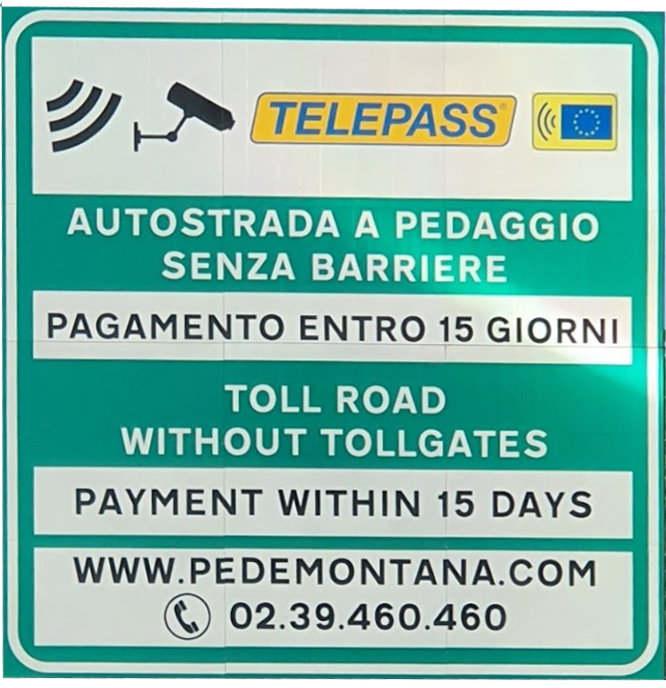 Along the Pedemontana, signs like this one are visible. This is the only indication that the highway is not free.

The Pedemontana, a highway hated by all users

To be convinced that Pedemontana is hated by its users, you must go to Google. The reviews are irrevocable, and the score (1.3 out of more than 1000 reviews) is the lowest I have seen so far. The answers left by Autostrade Pedemontana Lombardia community managers are bordering on mockery. They could find their place in a manual of practices NOT to follow in managing online interactions.

An analysis of the opinions left allows us to identify the sources of customer dissatisfaction.

The first recurring criticism is the lack of transparency of Pedemontana. The signalization, although it meets the standards, is little explicit. Most of the signs are in Italian, and for the passing tourist, it isn’t easy to understand that a payment is due. Complying with payment instructions is even more difficult because, at 130 km/h, it is hard to write down the instructions or at least the website address to consult.

In general, I think the main problem is the innovative principle of this highway. In the collective unconscious, a toll highway is associated with the barrier and immediate payment. Who would think that a payment is due if there are no barriers?

The second criticism about Pedemontana concerns the payment. If you were lucky enough to understand that you had to pay within 15 days, getting it done is far from an easy task. The payment procedure is incredibly complicated and opaque. Whether on the Pedemontana website or their app, you’ll need to create an account and fill out the necessary forms to register your vehicle. Then it will display the amount to pay based on the license plate after 24 hours. You will not be out of trouble as you still have to pay. Remember to check your email because you will not get any message if the transaction is refused. However, an email is sent to you (in Italian only, of course) that will tell you if the transaction has been refused, in which case you will have to start all over again. This is what happened to me.

In the end, paying the Pedemontana can easily take you 30 minutes. By shifting the burden of payment to the user, the Pedemontana is a highway that paradoxically wastes a lot of time rather than saving it, thanks to its free-flow principle. This process is, therefore, the opposite of what a successful user experience should be.

3/ Exorbitant price of the Pedemontana

The third complaint against Pedemontana is its exorbitant price. The Pedemontana is not only 3 to 4 times more expensive than a classic highway, but the price claimed is unverifiable. Neither the application nor the website gives you any information about the prices charged, and no information is provided to verify that the price charged is correctly calculated.

Finally, a debt collection procedure is automatically triggered for all users who have not paid within 15 days. This also applies to foreign tourists who have not understood what is written on the cryptic signs. Tough luck for them. Don’t even think about contesting. The claims of the users have been rejected in a recent decree.

The main problem of Pedemontana is the innovative principle of this highway. Who would think that a payment is due in the absence of barriers?

Why La Pedemontana has the worst UX in the world

The very definition of a good UX is to simplify the user’s life to increase his satisfaction. In the case of Pedemontana, everything is done to achieve the opposite: maximum dissatisfaction. Here is why: