Net Promoter Score (NPS) : to include in all satisfaction surveys or not?

Home » Marketing » Net Promoter Score (NPS) : to include in all satisfaction surveys or not?

Let’s first discuss the comment posted by Kieran Weston on Linkedin: “NPS. Providing meaningless metrics for lazy people since 2003”.
While this comment was obviously ironic, I respectfuly disagree with Kieran’s comment.
The Net Promoter Score has definitely been a debatted metrics since its introduction by Reicheld in 2003. But some progress has been made since then. 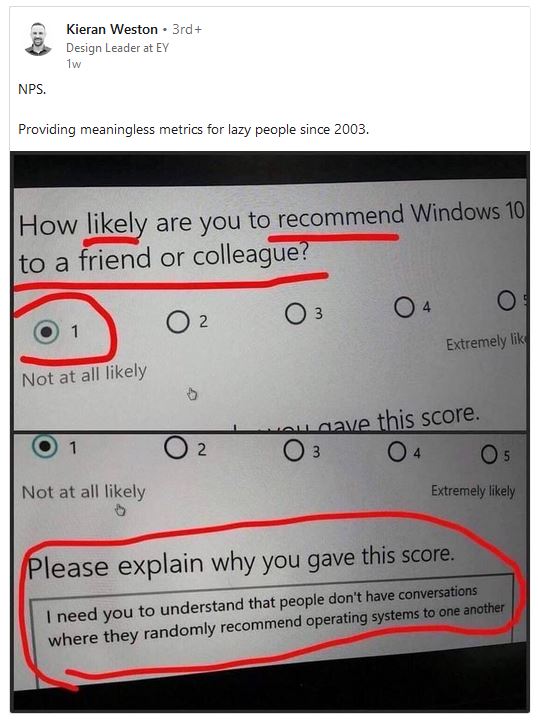 Is the NPS a reliable metrics?

Back in 2014 we already were reporting on an academic research that was confirming the reliability of the NPS score in correlation with word-of-mouth behaviors (which is exactly what the NPS scale is about: don’t forget the “would you recommend …” at the beginning of the sentence). In a groundbreaking work Lemon and Verhoef (2016) confirmed the reliability of the NPS scale. In conclusion, the Net Promoter Score is a reliable scale when it comes to customer satisfaction and word-of-mouth measurement.

An update on Customer Satisfaction Measurement with a Leading Expert

When we talk about Net Promoter Score (NPS), we are necessarily talking about measuring customer satisfaction in general. We wanted to take stock of this subject with a world expert: Professor Moshe Davidow. In the podcast excerpt below, we go back together on some key issues:

Is the NPS scale for lazy people?

If the NPS scale is for lazy people, one should first which people we are talking about: marketers or consumers. The latter are definitely more and more lazy. In this perspective the NPS is a quite useful tool to quickly meaure customer satisfaction in one particular context (especially online).
I’m not sure marketers are the lazy ones (it can always happen though) but they should definitely not use the Net Promoter Score as their sole customer satisfaction measurement instrument. As in any survey, important metrics should be duplicated and results compared to ensure they are consistant (that’s what we call “triangulation”).

Do you need to have actual word-of-mouth behavior to use the Net Promoter Score?

In the picture shared by Kieran, the comment of the respondent reads “I need you to understand that people don’t have conversations where they randomly recommend operating systems to one another”. This is a valid point and indeed, if your intention is to use NPS to get an understanding of word-of-mouth behaviors, you should first ask yourself whether the context is actually suitable for word-of-mouth behavior to take place. And in the case of operating systems it most probably isn’t that suitable (except in a few specific cases).

If you intend to use the Net Promoter Score as a proxy for customer satisfaction I think that NPS is perfectly fine even in cases such as the one criticized in the Linkedin post. In that case the NPS question (“How likely are you to recommend product X to a friend or colleague”) should be understood as a theoretical question, the answer to which embedds the (dis)satisfaction of the respondent.